The Hand of the King (Game of Thrones Season 1 Edit)

Rickon is gone, Jon Snow is gone, Bran is gone, Tyrion is gone, nothing in Essos (no Dany) or the Wall, Cat and Robb get a conclusion to their season arcs.
Here's the scene blocking (SPOILER):


Credit sequence over animated images of Robert killing Rhaegar Targaryen and the sacking of King's Landing, ending with him and his Hand, Jon Arryn.
Jaime and Cersei discuss the death of the Hand.
Catelyn tells Ned that Jon Arryn has died.
The King arrives in the North, presents the offer. They feast in celebration. That night Ned and Cat receive the letter from Cat's sister about the Lannisters, then Ned and the King leave for King's Landing the next day.
Jaime Lannister welcomes Ned to the capital.
Small council meets.
Cersei and Joffrey discuss enemies.
Joffrey gives Sansa the necklace.
Ned talks to Arya about swordfighting.
The dancing master teaches her a thing or two.
30 MINUTE MARK
Ned learns of Jon Arryn's last days from Pycelle and gets the book.
Littlefinger tells Ned about Ser Hugh and the armorer.
Ser Hugh refuses to talk to Ned's captain. (I thought about cutting this part because he just dies but I think it establishes the danger around these questions and cements Littlefinger on Ned's good side, which is important later. It develops a web around the old Hand's death with Varys, Littlefinger et al)
Ned meets Gendry.
Cersei issues Ned a word of warning.
Ser Hugh's untimely end.
Varys trusts Ned and tells him of the Tears of Lys (spelling?)
Ned meets another bastard.
Jaime threatens Ned (Tyrion is gone so the motivation is now different. He's been adversarial since they met and it should seem surprising. When we later learn that he is at the heart of the questions being asked it makes perfect sense (I hope!))
Syrio teaches Arya the water dance and about the one god, death. "Not today."
Ned wakes up and King Robert forces an uneasy truce between Cersei and Ned.
Ned wants the girls out of King's Landing. Sansa brings up hair color inadvertently...
Ned reads about the Baratheon line in the book.
The King goes on a boar hunt.
Ned confronts Cersei.
ONE HOUR MARK
Robert's deathbed.
Renley proposes swift action.
Littlefinger assures Ned.
King Joffrey calls Ned to court.
Ned is betrayed.
The First Sword of Braavos does not run.
Cersei pleads for mercy.
Varys visits Ned in the dungeon. He tells him Robb marches south.
Robb arrives at the towers. They begin a dinner feast.
The beheading of Ned Stark at the statue of Baleor and the Red Wedding are intercut in different pieces so both climax at the same time.
Yuren takes Arya with him. A glimmer of hope.
Short credits.
Mid-credits scene.
End credits.
COVERS: 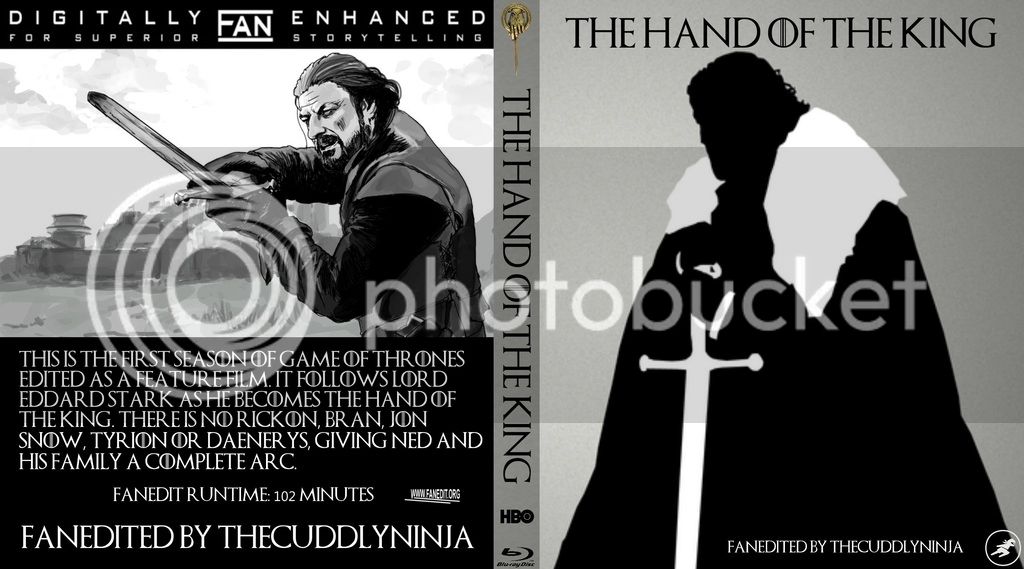 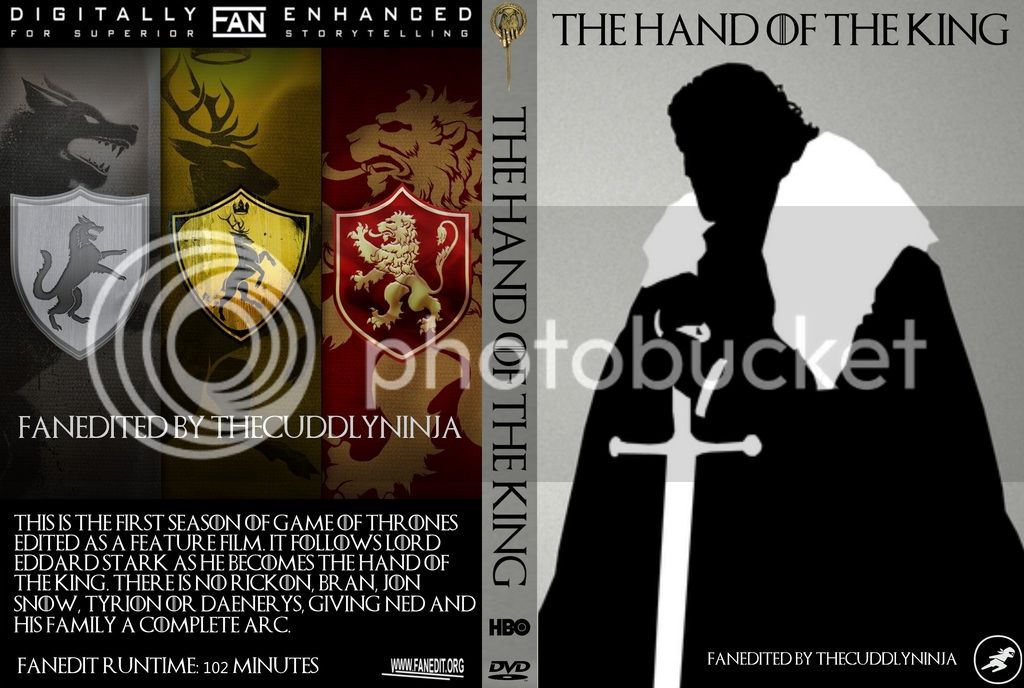 I searched "Game of Thrones" and there was nothing relating to the show on the whole first page of results. I started work on this and when posting this thread found out about a similar idea that looks abandoned. So I must give cedit to Sunarep (http://www.fanedit.org/forums/showthread.php?9182-Game-of-Thrones-as-a-movie&highlight=game+thrones) and geminigod (http://www.fanedit.org/forums/showthread.php?9715-Game-Of-Thrones-The-Ned-Stark-Cut) as they have thought of this first.

The title kinda evokes a dodgy true-life made for TV movie . Although 'Dragon: The Bruce Lee Story' is freakin' amazing, so forget what I just said. Also Winter isn't coming? This is a season 1 edit and were onto season 5 with no winter.

Hand of the King: The Rise and Fall of Ned Stark

or just 'The Rise and Fall of Ned Stark'

In the shadow of the Iron Throne

Ned Stark: Hand of the King

etc, that kind of thing. Just my 2 cents.

Point taken. I wanted to use the Stark family words but using 'Hand of the King' makes sense. It is pretty much what the movie's about.

thecuddlyninja said:
I wanted to use the Stark family words
Click to expand...

Given your proposed plot changes, how about 'The Rise and Fall of House Stark'

Forgot to mention, regarding Tyrion:


Lysa throws Tyrion through the moon door, which is what prompts the Lannisters to murder Ned, Catelyn and Robb.

TM2YC, you are a maestro. That title is great and I am going to use it. Thanks!

"The Starks of Winterfell: Losing Hand"

I've got to hand it you, Brumous. Well played.

I've got my first rough cut with all of my proposed changes. It's 2 hours 49 minutes, including credits and two post-credits scenes. I think I'll be trimming some Walder Frey stuff further but that should be close to the final run time. 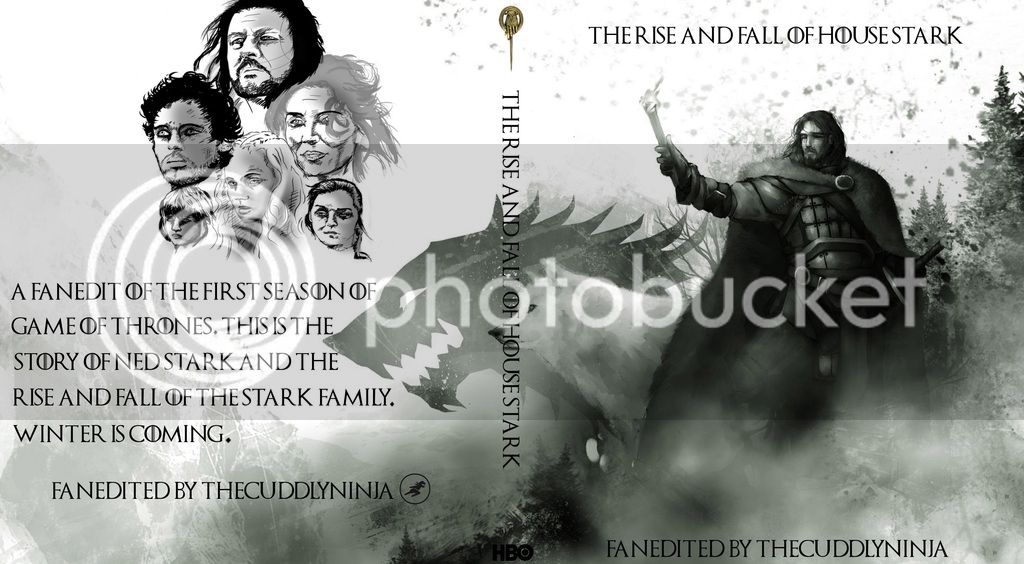 The edit will be done tomorrow. Just putting the finishing touches on the credits. Then I have to figure out the rules (I am a first time editor with a submission pending) and see whether I submit this to the Academy as well or wait to release it.

I came here thinking someone was going to do a completely different, never before attempted 'Blue Skies on Mars'-style fanedit of the Iron Man Trilogy, but I was sorely mistaken

thecuddlyninja said:
The edit will be done tomorrow. Just putting the finishing touches on the credits. Then I have to figure out the rules (I am a first time editor with a submission pending) and see whether I submit this to the Academy as well or wait to release it.
Click to expand...

The rules allow you to have two submissions as a new editor.

Frink, thank you for the info.

I have a hard time getting a feel for what the edit will be like from the trailer but I'm still looking forward to the finished product.

Side note: was the background music sped up or am I remembering the original wrong?

The trailer is more of a typical trailer than showing what I did. Maybe I should make something like that. The music wasn't sped up, but it was an all cello cover of the song, and I think it is played slightly quicker. If you're interested in checking it out while it's pending Academy approval, just shoot me a PM.

I would take you up on that but I'm going to be super busy over the next couple of weeks so the final release will probably be ready before I get time to watch it anyway.

With a good idea from asterixmeagol and some inspiration from That One Guy who did an awesome Berandal trailer, I've put together another trailer with more focus on what I changed and what it's about. Password is fanedit.org

Now you've got me interested :lol:
Will definitely watch this edit