I've been getting excited about all the Doctor Who buzz, special, downloads, DVDs, Radio shows and dramas, so I've been itching to do a Doctor Who based project. 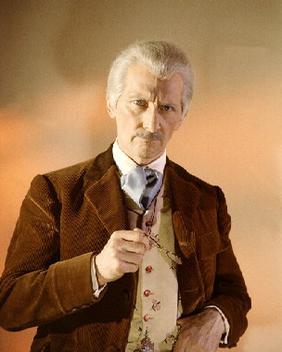 I'll be editing them as two 3-part serials in B&W (Roughly 25mins per episode) and presented as if they were always just part of the long running TV show (Somewhere between Hartnell and Troughton). Wherever possible I'll be trying to remove non-canonical elements (e.g. human Doctor is eccentric inventor etc) and make the films a little less silly. They will be called:

I got the idea of releasing them the way a TV Who serial would've have been released in the late 60s. So it's my intention to "Premier" each episode via streaming on Vimeo at the same time each week. So you'll have to wait a whole week to see the cliffhanger resolved ;-)! Then after 6 weeks I'll put them all onto a DVD for the usual FE release.

It's my intention to have the first episode ready to "Air" to coincide with either Thursday 20th's Mark Gatiss' 'Adventure in time and space' special or the 'Day of the Doctor' special on Saturday 23rd so you'll be able to watch it as part of the 50th Anniversary festivities. As tomorrow is the 20th and I've still work to do, the 23rd may be more likely . Then the other 5 episodes will follow at the same time, same place and same day after that.

Here is the opening minute of the first episode (An early version of it anyway) as a teaser of what is to come...


Right, I'll collect the episodes as I do them in this first post for ease...


Week 2: Escape from the City

Week 6: The Battle for Earth

LOVE IT!!!! Fantastic idea! And the weekly release schedule is classic!

This should be great fun! :clap2:

bionicbob said:
LOVE IT!!!! Fantastic idea! And the weekly release schedule is classic!

This should be great fun! :clap2:
Click to expand...


I've only got a little more audio work to do on episode (With an assist from dangermouse) so I'm well on schedule to "Premier" the start of this show at...

...an hour before the BBC 'Day of the Doctor' special so they can be watched together (If you so wish). You'll be able to view episode one here on this thread or direct on my Vimeo Channel.

Episode One of 'Fortress of the Daleks' more or less complete but I'm going to keep tweaking things until Saturday.

One thing that's bugging me... does this Dalek stun gas gun have a proper sound from the TV show?

I know very well what the Death Ray sounds like but this ^ is some kind of non-leathal weapon. Maybe it was only used in the movies or maybe the BBC Radiophonic Workshop have an FX for it? If they do it would be great if somebody could point me to a clip.

BTW, this is a wonderful idea for an edit.

Fantastic link to that channel thanks Alot of it is from the Radiophonic Workshop CDs that I've got but alot isn't too. A goldmine for this edit, thanks again.

Gonna use a mix of this sound from 'Genesis of the Daleks' and the original film FX...

"It's Saturday night... it's 7pm... it's BBC1 (Well errr actually no it's Vimeo/FE.org)... it's time for another exciting adventure of Doctor Who"

So here it is, episode one (Dubbed 'The Dead Forest') of 'FORTRESS OF THE DALEKS'...

Here is a rough outline of the changes (Contains spoilers *Alex Kingston voice*)...


- Converted shot by shot to 16:9 ratio.
- Processed to look B&W (and a bit televisual).
- BBC continuity intro and outro added courtesy of the vocal talents of [MENTION=7682]dangermouse[/MENTION].
- Opening TV credits created from a blend of Hartnel, Troughton, 1965 film elements and a few things of my own.
- Movie credits and opening scene cut. This removes most of the material contradictig the established Docor Who canon.
- Removed references to Barbara being The Doctor's other granddaughter. Barbara and her boyfriend Ian are now restored to being Barbara Wright and Ian Chesterton (And are named as such in the credits), two of Susan's schoolteachers.
- The Tardis now has the TV hum whenever it is on screen.
- Ian's clowning toned down throughout icluding halving the nonsense with the door (He's still a bit of a cowardly twit but much less so)
- The Doctor isn't now named as "Dr Who"
- Many refrences to The Doctor having a human life and home/laboratory on earth have been cut.
- A few minor re-arrangements of scenes.
- Any and all refrences and callbacks to the events of the deleted intro have been removed.
- Dalek stun gas gun made to look and sound more in line with the TV show with the negative effect and Radiophonic Workshop sound FX (Thanks to all who suggested ideas on that front).
- New cliffhanger ending created using music from 'The Sea Devils' and a re-arrangement of shots.
- Ending credits created blending the '1970 closing sting and theme' with Hartnell-esque scrolling text. The characters have their proper TV names and the film crew are credited with a couple of nods to the TV show.
- Short teaser added for next week's episode (Again thanks to [MENTION=7682]dangermouse[/MENTION]).
Hope you all enjoy it!

A very fun and cleverly edited episode. The cliffhanger was perfect. So was dangermouse's BBC voice! Amazing!

Looking forward to next week's episode.

A very fun and cleverly edited episode. The cliffhanger was perfect. So was dangermouse's BBC voice! Amazing!

Looking forward to next week's episode.
Click to expand...

Glad I could add something to a marvelous evening: The 'Day of the doctor' special was genius, the BFI live aftershow was a shambolic hoot and the '5 Doctors-ish' mock-doc was hilarious.

TM2YC said:
Glad I could add something to a marvelous evening...
Click to expand...

The great thing about this weekly project is it feeds our Whovian appetites until the Christmas Special.

Again, wonderful edit. Thanks for the entertainment.

Let me join the praise for this edit. I'm an enormous Peter Cushing fan and always wished his Doctor Who movies were better. And now, judging from this first episode, they definitely are!

SilverWook said:
I saw some sort of color glitch at 20:44. Or is it supposed to be there?
Click to expand...

A tiny flash of purple as Susan is running? It's a glitch somehow introduced when Vimeo processed the video. I noticed earlier this evening. Will have to re-upload and see if it clears. Until then, I suggest timing a blink of your eyes at exactly 20:44 to correct it.

Thanks for the positive feedback so far y'all . I better get cracking on next weeks episode. Should be easier now I've got the opening and closing locked from episode one.

I've just thought of something special for after the end of episode 3 (I think it should work) but I'll keep that under wraps for now.
M

I'll be giving this a watch tomorrow! I'd have seen it today, but between AAISAT and DOTD, I may well have overdosed on Who.

Fantastic work here, got real childhood chills from that

I like how your "next time" trailers are just the right sort of length, the ones on the new show do tend to go on for half a bit
M

TM2YC said:
Until then, I suggest timing a blink of your eyes at exactly 20:44 to correct it.
Click to expand...