Right on. It's Halloween and I want you all to have a nice party. Grab some popcorn and enjoy this nice horror compilation. 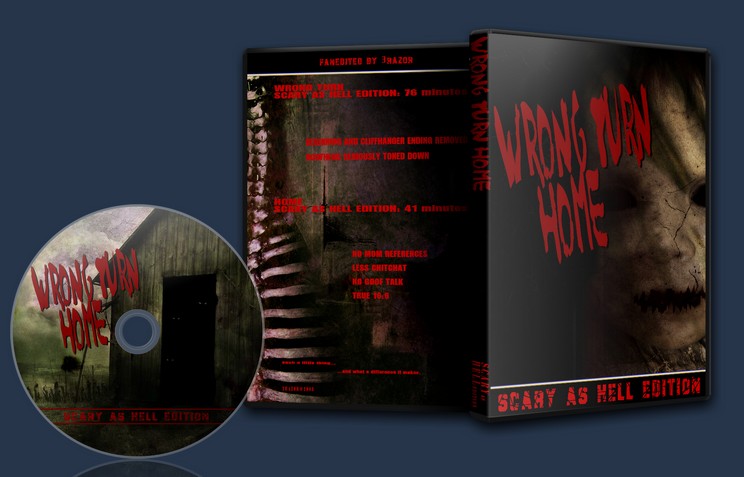 Cuts removed/added/extended :
Wrong Turn:
- deleted climbing couple beginning
- deleted Scott's gooftalk all over the first half of the movie
- deleted the cliffhanger ending

Home:
- deleted Scully reading her notes to Mulder at the crime scene
- trimmed the black pauses (commercial interruptions) to better fit a continous story
- deleted Mulder saying to Scully "I never saw you as a mother."
- deleted pig head on porch
- deleted Mulder's TV antenna trouble and the next mother reference
- deleted Mulder and Scully having trouble in getting the pigs out and both of them goofing there
- deleted Mulder's fun surprise at finding the newspaper that states that Elvis is dead
- added my own credits

Fanedit details (please add here details about DVD contents as well as video and audio information):
I always liked WRONG TURN and a have a weak spot for this movie. It is frightening, violent and disturbing. And from the first time I watched it, it did not so much remind me on DELIVERANCE, but on the incredible horror episode from X-Files: HOME.
When watching it again and reading some reviews about it, I had to discover that a lot of people find it rather bad, most of all because it follows a rather cheap plot and offers no true surprises. It is just another typical B-horror movie.
So I thought about getting rid of what was most bugging (especially the lame beginning and the cliffhanger ending) to turn this into a more watchable and straight to the point movie. It is very short and really wastes no time anymore. The deletion of Scott's gooftalk adds a lot to the atmosphere.
But when I was finished, I had the feeling something important was still missing: X-Files: HOME. So I watched it again and decided to make a few edits to it to make it even more dark than it already way by removing the lighter parts from it. I also turned it to 16:9, going scene by scene for the best image presentation to make it appear more modern.
And it looks and works just great.

Your intention for this fanedit:
I wanted to create a nice horror fanedit collection for Halloween 2008, uniting on DVD two great plots about inbred monsters.

Your way to achieve your intention:
the usual way, which was as usual pretty unusual.

Hardware and software information (what did you use to create your fanedit):
My nice computer. His name is Dofudome (don't fucking die on me).
Womble. Goldwave. Besweet. DVD LAB PRO. Pro Show Gold. Avisynth. TMPG Xpress.

Additional Comment:
- There is a stutter on camera drives in WRONG TURN, which I could not get rid of. I hope it is not too distracting.
- Because there are 2 movies on this DVD, I will not create a torrent from it. Sharing a complete DVD via torrent will take me forever. Sorry.
Who am I?
I am 3Raz0r, I like horror movies and I dig fanedits.

Time needed for the edition: 4 weeks
persons involved: my beautiful self

cool. Home is one of my favorite X-Files episodes (and Home, PA is not too far from me) so I'm looking forward to seeing this. I've never seen wrong turn though.

I have always found your work meticulous and of excellent quality. I will always give your FanEdits a go because of the high standard you set as a FanEditor. Still, psycho inbreeds scare the hell out of me!!!

Well, Mollo, that is kind of the intention. :-D
T

There for a minute, I thought you had spliced the Home episode with Wrong Turn... was about to say... phew. Haha. Sounds good though!

hey 3Raz0r, is that your picture on your avatar?
where did you get the cool white contact lenses?

First, I have to say that the presentation of this DVD is superb. The menu and the transitions twist like a snake. I thought the "dogs barking" over the "this is a FanEdit warning" was just my cup of tea.

There are two choices, the feature and the X-Files episode. It all feels like a DVD drive-in inbreed double bill. "Yous gonna hav'ta takes care thur, strangur!"

The way 3Raz0r inserted "it's" name during the opening editing credit was just brilliant and so cleverly done. As for the movie you know the score, unsympathetic young'uns are dispatched by sympathetic and attractive inbreeds. The ending is not a happy one as some of the young'uns survive, darn it!!!

The end credits of the movie I enjoyed the most because 3Ranz0r uses them to wish everyone a Happy Halloween (a satanic festival that Americans seem to enjoy).

I am not much of an X-Files fan but I can see the similarities between these two works very clearly. I just wish Anderson would stop talking through her teeth. "Hansh Up! It issh the Polieesh!" Still, Home it is the better piece of the two.

The audio is perfect. The image quality is very clean especially for the X-files episode.

"Squeal Little Piggy!" Nothing but a 5 for this FanEdit but I have forever been put off inbreeding. It just does not work!!!

I hope 3Raz0r's next project will be "Out of Africa" or "Pretty Woman" although I don't hold out too much hope.

Nice review, mollo! Thanks for watching my fanedit and taking the time to comment on it.

uploaded to Rapidshare on linktalk
J

the presentation is VERY cool, the fanediting choices are great and really improve on these already entertaining "movies".

in "wrong turn" we get a lot less crappy dialogue and scott isn't such a douche. the ending was kinda weird for me... i think the scene with the map was out of place here. for pacing, this could be removed and then we have them driving "past" the gas station and onto the highway. also, i think this could have been tightened up a lot more. there is still a lot of dialogue that i was expecting to be removed for obvious, silly, reasons.

i found home to be a perfectly edited and realized connection to "wrong turn". i actually haven't seen it in a long time, so it was a mostly "new" experience. what was removed from "home" (some of the silly and unnecessary moments) help with the pacing and it now seems a lot more chaotic and creepy. great job.

also (and i'm probably outing myself somehow here), did anyone else realize that the kid pitching in the intro was ben from big love? i even had to look it up on IMDB just to be sure. (YEP!)

in both of these occasions, the audio does not go out of sync, so i'm guessing this is some sort of export/encoding issue. these WERE distracting, tho. each time i stopped and watched each segment again just to be sure.

entertainment 9/10
fanediting 9/10 (perfect!)
video 9/10 (slightly pixelated. a few shots could have been cropped better to 16:9 - especially the "home" location titlecard.)
audio 10/10 (no issues to report)
orginal 8/10 (good, but not great)
fanedit 9/10 (great! just the lack of cheese here puts this in a continued state of discomfort )

so now that i figured out my copy of "T3 - A Coming Storm" is bunk, i figured i would ask to see if anyone else has these problems with "Wrong Turn" that i described in my review...
J

I will have to double check the time on the T3 playing it on the TV and not VLC.

yes, I have the same 2 glitches as well.
J