Captain Khajiit said:
I agree, though an SD release in 4:3 would please me.
Click to expand...

Yes, even that would be a massive improvement. A 4:3 HD transfer would be relatively easy and cheap to produce if the FX shots were just upscaled next to the 90% of normal HD footage.

In a series of recent tweets, JMS outlines the stubbornness of WB executives and why they won't remaster or produce new content for the show

If I remember a previous interview from years ago it would also be very costly. While they still have all the masters in HD the special effects shots are only SD so they'd need to re-create them all from scratch. I don't think B5 has the fanbase Star Trek has, so convincing WB to cough up the dough would probably be very difficult.

I love Babylon 5! After many viewings on a small screen, I was quite horrified recently when I played B5 for the first time on a big screen (PAL dvd on a 105" screen). Yikes! The CGI resolution is terrible compared to today's standard. It was so distracting that I turned off the projector and continued the episode on my tablet.

Until a series reboot happens, I too don't believe in an HD upgrade. Anyone petitioning WB would then pitch for a reboot, before upgrading the existing material.

If any Warner Bros execs visit this site: Yes, I'll watch a reboot. I'll buy it on disc. I'll buy an HD release of existing Babylon 5. I'll pre-order the blu-rays on the first day.
Full disclosure: I might pass on Crusade (great potential, but not developed enough) and Legend of the Rangers (felt too much Dungeons and Dragons in space: take a level-1 thief, warrior, elf, etc., and give them an adventure).

P.S. Anyone recognize the hull of the station?

But do we really want a REBOOT???

JMS practically achieved the impossible with his 5 Year story arc and why lessen it with a remake?

Now a CONTINUATION I would wholeheartedly support.   The B5 Universe is massive.  Let's explore it, not retread it.

I agree: a reboot isn't needed.

I agree. I'd love to see something set in the same universe 20 years after the finale.

Perhaps jump two generations. Have them clean up whatever mess Mollari's son ends up making. Meet new races, explore new sectors. Bring Martin Sheen back as a Soul hunter who's now well-established and respected by his peers. The Psiwars might still be unresolved. And... I'm starting to ramble.

asterixsmeagol said:
I agree. I'd love to see something set in the same universe 20 years after the finale.
Click to expand...

I concur. I really wish JMS would have broken with the annual tradition and just set some of it in the fifth year and the rest in the future so we could have gotten the Telepath war, not Byron and his campfire group singing "all come together"

I find it interesting that they haven't attempted to have the CGI shots redone by the fans. Surely some of them are dedicated enough and have the skills and know-how to do it, and I'm sure they'd even do it for free.

Coming to Amazon Prime in June


"No dictator, no invader can hold an imprisoned population by force of arms forever. There is no greater power in the universe than the need for freedom. Against that power tyrants and dictators cannot stand. The Centauri learned that lesson once. We will teach it to them again. Though it take a thousand years, we will be free."

I just finished a re-watch of 'Season One: Signs and Portents' and it was better than I remembered and there are actually few episodes that don't lay groundwork for the major events in future seasons. It's arguable more satisfactory in retrospect, as I mostly enjoyed all the foreshadowing and prophecies of events to come. I watched all of B5 when it was first broadcast on Channel 4, again from a repeat broadcast, again from home VHS tapes of the 2nd broadcast and one or two more times when it came out on DVD, so this is at least the 5th time I'll be watching the whole show. I'm viewing my own captures of retail PAL 4:3 VHS tapes, as I prefer them to the 16:9 DVDs.

I'd forgotten how much of the central plot lines and important secondary characters are introduced in this first season. All the major future antagonists make important appearances like President Clarke, Bester, Mr. Mordorn and the Shadows. With Season 1 down, the shows really kicks into gear with Season 2 in the build up to several intergalactic wars. I'm looking forward to it .

This scene was still a highlight from S1 (Sinclair demonstrating Earth's belief system to the other alien races):

Finally resuming my viewing of season four after five months. I think if I were to edit this season, I'd probably remove the early hints that Garibaldi is being controlled or under duress from his imprisonment/interrogation  just to make his gradual turn more of a shock to the audience instead of something they can understand and anticipate right from the get go.

Zarius said:
Finally resuming my viewing of season four after five months. I think if I were to edit this season, I'd probably remove the early hints that Garibaldi is being controlled or under duress from his imprisonment/interrogation  just to make his gradual turn more of a shock to the audience instead of something they can understand and anticipate right from the get go.
Click to expand...

In one of the first S2 episodes I noticed Garibaldi's first reaction (after coming out of his coma) to hearing Sheridan was the new commander is distrust and paranoia... which is what Bester uses against him much later in the story line you're talking about. Nice.

I'm up to S2E6 'Spider in the Web' now and one of the guest stars is Adrienne Barbeau. She plays a Mars government official called 'Amanda Carter' and it's mentioned that her great-grandfather was one of the first people to live on Mars and he was called 'John' . 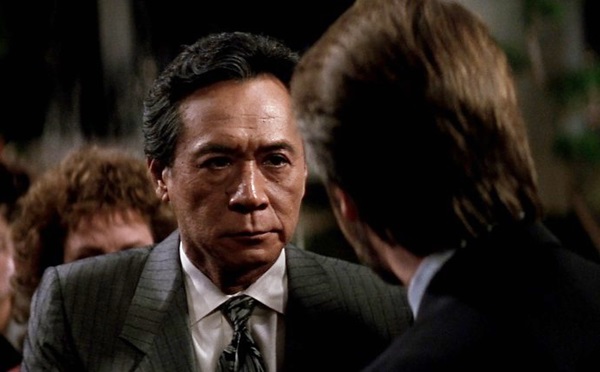 ^ Again he plays a Japanese businessman who is murdered by somebody claiming to be part of a terrorist group .

The always insightful commentary of Rowan J Coleman on the short lived CRUSADE....

That sums it up very nicely, although a little light on the criticism. A problem that was missed was the jarring climb-down in the quality of the FX. B5's FX were almost always great and they built in complexity and scale as the series went on, maintaining quality as they grew. With Crusade it's like they started at the same level of scale as B5 ended with but with the earlier skill level. I can't remember if they had a new FX team, that would explain it if they did? Or maybe because it was being cancelled, the FX were never properly finished?

Yes it can! For realism and detail, though not resolution.
I wish B5 could be upscaled in a meaningful way. But we know that ain't happening.

Instead, it would be amazing if we get a sequel series. Or perhaps the Bester or Londo book trilogies can be turned into movies.

Crusade is much better if you watch it in production order instead of broadcast order.

Legend of the Rangers feels like a weak episode of Dungeons & Dragons. Throw together a level 1 warrior, elf, wizard, valkyrie, and give them a difficult mission.

Taking inspiration from @"GelflingHand" 's Thirdspace edit to turn a B5 movie into a double episode, I wonder if there is enough interesting story in Rangers to edit that into a single episode? Trim 86 minutes down to 42.