by AdigitalMan
What is it about? This is for all those, who couldn't get enough Titanic in the first place. All deleted and extended scenes were restored into the movie. Now it's complete.

1. This three disc set restores all 29 deleted scenes to bring the run time to a whopping 3.75 hours. Using the Special Collector's Edition of James Cameron's TITANIC as a basis, this extended edition restores all of the deleted scenes in context with the film.
2. Disc One presents the extended edition up through the collision with the iceberg.
3. Disc Two presents everything afterward, with the original theatrical ending.
4. Disc Three is the same as disc two, but with the Alternate Ending, so you can choose which one to watch. 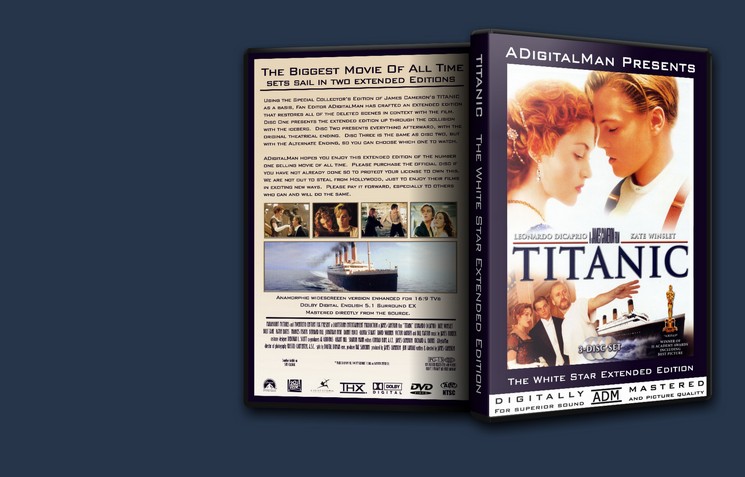 thanks for sharing then.
G

One is glad to be of service.

many many thanks for this. :-D
Z

Ok, I just started running the jdownloader DLCs for this and the first 10 RARs of disc 1 said something about "200 MB"....it was in German, but I'm guessing it means those files are over 200MB and there's some kind of problem with that.

So what's the deal?
J

dunno. i got them, but i had/have a premium account.
Z

Well, I don't think paying has anything to do with this because the ones that have come thru are 200MB also.

the size i made i thought was the right size for free users (ofcouse to large) so im afraid if you want this you will have to get a PREM account.
Z

I guess you don't feel like re-doing it at a different file size?

Ziz said:
I guess you don't feel like re-doing it at a different file size?
Click to expand...

You don't think there's a chance you could post this as an avi or something, do you? I'm pretty keen to see it, but I don't have enough bandwidth to download two discs, let alone three.
G

Joelio said:
You don't think there's a chance you could post this as an avi or something, do you? I'm pretty keen to see it, but I don't have enough bandwidth to download two discs, let alone three.
Click to expand...

I downloaded a copy of this in avi format but whoever did it, although the quality was good, didn't do properly. What happened was that on the DVD's, when the captain was told how many people could be saved, and how many was on board, he turns to the camera and says "Well, I believe you may get your headlines, Mr. Ismay." before the end of disc 1. In the avi version (that I got from the internet) he turns to the camera, and it cuts out from there.

But whoever can convert it to avi for Joelio, much appreciated.
J

I can't sorry... Hope you do find someone who can.
J