The Beast In Me

In the late 1990s, when David Chase was shopping around his script for The Sopranos, he was convinced that, even if he got a pilot made, no one would ever pick it up. In fact, he was hoping that this would happen because it would give him the push to be able to turn The Sopranos into a feature film that he&#8217;d always dreamed of making. Fortunately for us, this didn't happen. But what if The Sopranos wasn't picked up? What would Chase's film look like?

To create a movie out of the first season of The Sopranos that best approximates the feature film that David Chase may have made. This edit focuses on Tony Soprano and his relationship with his mother, uncle and psychiatrist and how these relationships set in motion a series of events that drive the plot of the movie. Gone are all sub-plots and diversions that were created in order to fill the 13 episode run of the first season.

Everything that did not deal directly with Tony&#8217;s mental health and how his relationships with his mother, uncle and psychiatrist drive the story forward was cut. This includes almost all mob activity and all sub-plots involving Carmela, Meadow, A.J, Christopher, Adriana and others. 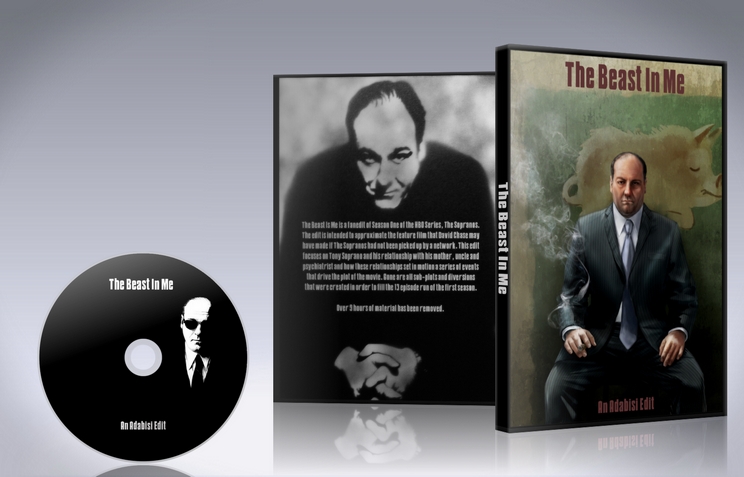 
Adabisi has become quite adept at TV-to-Movie stories, this time taking season one of The Sopranos and turning it into a lean, mean 2 hour drama. The story flows quite well, and I'm amazed how much this feels like a Shakespearean tragedy. The ending is inspired, and the story feels both complete and unsatisfied, as is life.

Recommended for fans of The Sopranos. If you've never watched an episode before, this probably isn't the best introduction, but it's better than not watching anything.

Glad you liked it, Neg! Thanks for taking the time to watch and review.

Thanks for the review [MENTION=4677]bionicbob[/MENTION]! Glad you liked it. On the one hand, I agree with you about the Tony/Pussy relationship and I couldn't really do much there without getting into a lot of distracting subplots. On the other hand, to paraphrase a line from Donnie Brasco, "Pussy was his best friend because Tony said he was his best friend."

Adabisi said:
Thanks for the review bionicbob! Glad you liked it.
Click to expand...

I just posted a review for this.
In short, a wonderful take on sopranos season one,
far more enjoyable than the original season to me.
But it doesn't quite fit the movie format.

"I remember watching sopranos season one way back.
It's not like a watched it from beginning to end, but a few episodes here and there.
I though it felt sloppy. Great concept, just not very well executed.
The acting was less than great at times,
and the story at times came across as stupid or contrived.

But there were some moments of genius in there,
when James Gandolfini in particular really shone as an actor,
(some of the surrounding characters were great too, but he was the star for sure.)
and the story felt really genuine and epic. Like others have said bordering on Shakespearean (but not quite)

This edit contains all the genius and almost none of the stupid.
It's fairly close to being a perfect edit of Sopranos season one.

As it is, to me it comes across as episode 2 of a 3 episode Sopranos miniseries.
Like any good episode 2 this is where most of the important character development and plot
of the miniseries happens, and it's satisfying and complete in itself. As long as you are aware of all the characters and the general plot beforehand (which is what episode 1 is about).
And the (as I interpret it) cliffhanger ending leaves you craving for the next episode (episode 3, the resolution)

All in all this is really enjoyable, and a really good take on sopranos season one
and I do recommend watching it.

But you do need to know the characters and general plot
to fully understand what's happening.
And the ending will leave you wanting for more.
So I would suggest watching a few episodes of the series to fill in the gaps.
I wish I could recommend specific episodes, but I don't know season one that well.
Perhaps someone else can fill in for me? =)"

Thanks for the review [MENTION=9349]herowoac[/MENTION]! Glad you liked it. I tried to make it enjoyable for both Sopranos newcomers and veterans, but I will admit, the veterans probably get a little more out of it.