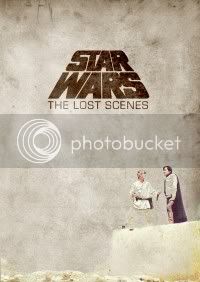 by Move Along
What is it about? this DVD allows viewing of the &#8220;lost&#8221; additional scenes of Star Wars IV: A New Hope. With great effort these scenes were preserved in the best possible quality (which is still rather poor of course). Enjoy a true rarity.

In 1998, four of Star Wars&#8217; deleted scenes were released for the first time on the now out of print &#8220;Behind The Magic&#8221; cd-rom. These scenes were presented in very low quality, being limited by the cd-rom medium&#8217;s capabilities. However, despite the poor quality, these &#8220;lost&#8221; scenes hold a special place in every serious Star Wars fan&#8217;s consciousness. Up until now, the best way to view these scenes in their unedited entirety was to view the BTM cd-rom. With BTM long out of print, these scenes have essentially become &#8220;lost&#8221; again. The purpose of this DVD is to allow viewing of these scenes on the most appropriate device, a widescreen television.

Using information from originaltrilogy.com&#8217;s technical forums, these four scenes&#8217; raw files were extracted from BTM in ZNM format. Using grisc on each ZNM, each scene&#8217;s individual frames were extracted as PNG stills along with corresponding WAV files. These files are as close to the original cd-rom material as possible.

Each lost scene on BTM runs at 12fps. For television viewing, each frame was doubled and an image sequence was created running at 24fps. The image sequence was then exported and resized for anamorphic 2.35:1 and then letterboxed for 16:9. This was done for both PAL and NTSC and then framerates were conformed to 25fps and 23.98fps, respectively. Each file was then taken into a video editor and fade in/outs were added. A lossless video codec was used at every step until encoding to MPEG2 and every original frame is presented completely.

Work done on each scene:

CANTINA &#8211; Each still frame was cropped from 624Ã416 to 616Ã257 to eliminate black borders and the ridiculous additional SE material at the bottom of each frame. The original Cantina frame area was also surprisingly interlaced. A de-interlacing filter was applied to remedy this.

In making this DVD, I attempted to present these scenes as close to the source material as possible. I did not try to perform any major restoration or clean-up. The frames are very pixelated and have tons of dirt and scratches on them. Both BTM discs&#8217; extracted raw contents are included in the DVD-ROM section. The source material is in there for anyone with the desire and skill to restore these frames. I would be interested to see what someone could do with this. I personally like the feel of the dirt and scratches so my work is done&#8230;

I wonder if this will be obsolete in September...