Donor
Faneditor
When the Guidelines dropped a couple of years ago, many in the works Trek fan films went silent.

One of the more ambitious ones has resurfaced.....

Get your JDownloader ready to grab it,  as this puppy might get pulled very quickly.

Donor
Incidentally, this is also the title of one of my favorite Star Trek Novels. 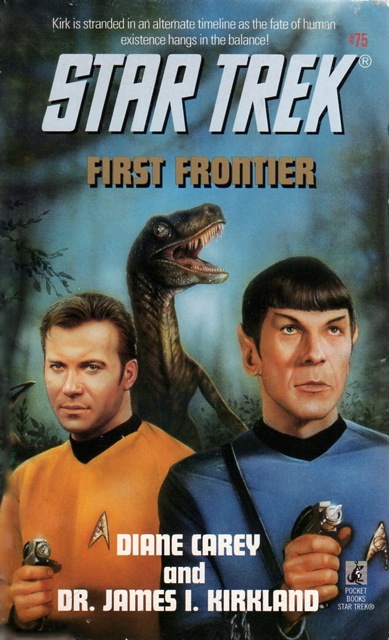 What is that, a Jurassic Park/Star Trek crossover?

Donor
Faneditor
Just a couple days to the release....

It's May, soon coming onto June, and still no sign of it. Do you know of anything going on with it?

They have gone radio silent again.  There has been no updates to their Facebook page, no responses to inquiries on their Youtube page or new nformation on the Trek BBS.

Though I think it is in the Scott Lyttle interview posted above, the fx team still had several shots to complete and seemed to suggest the announced release date was unlikely.....

So many bold Trek in the works fan edits have vanished....

Starship Farragut... their last episode has never been released.
Pacific is supposedly scheduled for an August release.
Still two unreleased New Voyages episodes, one of which starred the late Richard Hatch.

Faneditor
I thought the Hatch New Voyages had been released, hmm... :s

Donor
Sorry to go a little off topic, but regarding the Richard Hatch episode of New Voyages:

Star Trek: New Voyages said:
Torment of Destiny
Update Feb. 2018: Due to the CBS Fan-Film Guidelines, post-production work on this episode has been halted. All scenes have been filmed, but there are about 180 visual effects that need to be added to the episode, which would be many months of work. As two of our three visual effects experts can no longer work on the project due to the restrictions of the Fan-Film guidelines, completion of this episode cannot continue without special permission being granted from CBS. This is unlikely during release of Discovery and we are unsure if this episode will ever be permitted to be completed. We understand this is disappointing for our loyal fans, but we are not responsible for the events that led up to the release of those guidelines.

You can however view our behind the scenes footage, below.

Donor
Faneditor
An update was posted on the TrekBBS....

"Hey there! Lots of things are going on behind the scenes. I was able to find an amazing CG artist who is busy perfecting the visuals. We are nearing a completion of a new trailer, this one will feature his talents and show the film's full potential. That should be ready in a month or so, then the film about 6 months after that."

Faneditor
Bummer, further pushbacks. If this were official I'd be panicking.

...and to celebrate, the fan film STAR TREK FIRST FRONTIER will be released on Youtube TODAY at 8:30pm Eastern Time!!!!
D

Half 1 in the morning for me.

Donor
Faneditor
Watch it while you can, as you never know....

STAR TREK THE FIRST FRONTIER is a fan film that chronicles the adventures of Captain Robert April, the first captain of the USS Enterprise.

Most recent modern Trek fan films usually have incredible CGI FX but the live action portion is awkward... as the cast is mostly just fans playing Trek and not trained actors (this is not a knock down, if given the opportunity I was happily join a Trek fan production to be a performer

) But with First Frontier, it is sort of the opposite.

The live action stuff is excellent. A strong cast that fully embody their characters. I believed their performances. More and most importantly, I liked this crew.

The direction is mostly excellent. There is some great staging and scene framing. The lighting and set production design is amazing for the low budget. There were a couple of scenes where the editing between the static wide shot and the close up hand held is a bit jarring. But overall, the live action stuff is truly impressive.

The FX is more a mixed bag.

On the positive side, James Horner's Wrath of Khan score is masterfully used in many places and really elevates the material.

The practical model fx is also a bit mixed. The static shots look really, really nice. But motion shots, like the Enterprise or a Shuttle moving through space look very dodgy. Also, the close up shots of the Enterprise only reinforce the fact that it is a model, as it lacks texture and fine detail compared to model used in the original series.

The CGI is also mixed. The space composition shots are beautiful. The CGI ships are mostly good. The CGI enhanced aliens and phaser shots are all a bit janky. But I do love the actual practical alien design! It has a great 1950's monster/Mars Attacks look.

There is quite a bit of green screen work in the film and while most of it is decent, there were a couple of action sequences where it falls short. But again, I must stress, for the tiny budget, it still has charms.

Final thoughts... while the technical side has issues and may not be quite on par with other current Trek Fan Films, it is the human side that wins out. The script is solid and the actors are excellent. As I said, I really grew to love this crew and I would happily watch more adventures about them. For me, a fun and enjoyable watch.

I just ran across this thread and watch the movie. I agree with pretty much everything bionicbob said.

It's a mixed bag, mostly good. That means the missteps are all the more jarring. While some of the CGI and SFX fall short of current state of the art, I just recalled how awful the original series effects were in comparison to today. So, in all an impressive performance for a fan film and deliberately or accidentally caught the feel of the original series.

The audio mix was as noted all over the place. Even my wife was commenting on it and I was constantly adjusting volume and did several rewinds to try and catch the dialog.

The acting was generally pretty good with only a few cringy bits. Really the main scene that stood out was Captain April and his wife's argument. Felt a bit too daytime TV soap opera and out of place.

What really bugged us was there were a couple of jump cuts where we both looked at each other thinking how did they get there? It seems like a scene got cut that shouldn't have in a couple of places.