Revenge of the Sith by DominicCobb

Revenge of the Sith by DominicCobb - Fanedit.org

Hey guys. Been awhile, busy with life, etc., also busy with some Star Wars edits I wasn't sharing here for one reason or another. This is a project some of you might be familiar with from originaltrilogy.com. I’ve been working on this in some form or another for the past five or six years. At first it was just a combo of Hal9000 and L8wrtr’s edits that I kept to myself, then over time I started incorporating more and more of my own changes and sharing them with others. I finally finished and released a V1 of this edit a couple years ago under the moniker “Dom’s Useless ROTS Edit.”

After much consideration and at the suggestion of others, I’ve decided to finally list it here with the release of version 2 which makes minor changes and provides some sound and color improvements. Ultimately I have to admit that the edit is not so “useless,” as I do think that I have made an edit that is unique enough to list on its own (which had kept me from posting here initially).

I hope you will enjoy my cut of the film. I have borrowed many ideas and even specific cuts from other edits but I have also put my own spin on quite a few different things, some radical, some subtle, and I personally think the film works better for it. This is the version of the film that I’ve always wanted to see, or at least the closest to it I can get.

The primary goal here, beyond just the general nips and tucks, was to improve Anakin’s story. I find his fall to the dark side in the theatrical film to be rather sudden and unconvincing. So here my job was to sort of smooth out the kinks - trying to make Anakin more sure of himself and his allegiance to Palpatine before the turn, and then somewhat softening his words and actions after the turn. There’s a lot of little changes and tweaks that went into this (too many to list here), but I do feel like his story in this version is more believable.

My intention started off as taking Hal9000’s edit and mixing it with the structure of L8wrtr’s edit (where the opera/Plagueis scene comes early, to establish the dark temptation right off the bat). Eventually the project morphed. The structure has some similarities to L8’s, but is mostly my own design which I spent a lot of time considering. Many scenes are based off Hal’s, but just as many changes are my own. My most radical change is removing the Order 66 montage, and just focusing on the main characters. The whole film has a new scene-by-scene (shot-by-shot when needed) color correction, along with a light film grain applied. Many sequences have been rescored (and, as a consequence, re-SFXed) to add in more of a classic Star Wars feel throughout.


Special thanks to the various edits I’ve stolen from, by editors such as Hal9000, L8wrtr, aalenfae, NFBisms, kerr, seciors, and all the others I’m forgetting or don’t know who have made their impression on the lineage of ROTS edits. Those who have provided materials that I used, such as kk650, bryantmh, and brash_stryker and Bobson Dugnutt’s SFX archives. And of course Collipso who has been an invaluable sounding board with which to brainstorm about the edit, and who has always been available to give excellent feedback. 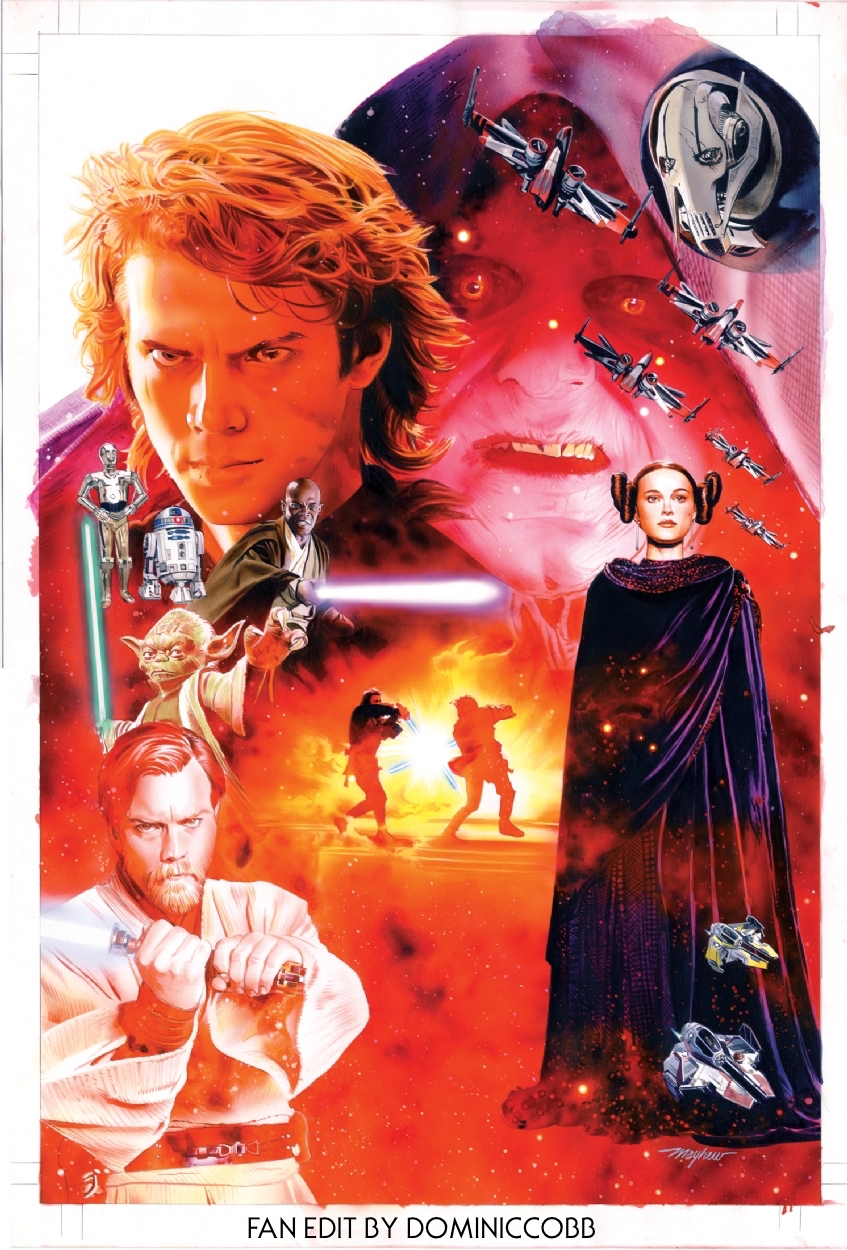 And now I have some clips to show a bit of what you can expect to see in this edit.

Here’s a clip of the first 6 minutes of the edit, featuring the following changes:
- A new crawl
- A different recording of the main title
- Color correction
- Trims to get the space battle down to the essentials
- Cutting the buzz droids but keeping the missiles and Rebel fanfare flourish (the only use of it in the PT!)
- Adding a classic track to make the daring landing on Grievous’s ship more adventurous
- Subtracting Obi-wan’s aerobatics out of his cockpit

Here’s a clip of my favorite moment of remusic-ing the film, giving the climax of the opening adventure a classic OT track to give an OT vibe. Hopefully amping up the fun and, by proxy, making it seem like Anakin and Obi-wan are more buddy buddy. Other changes:
- Color correction
- No ray shields capture
- Grievous short joke reedited for better impact
- Trims to battle droid silliness
- Trims to the landing
- New music for when the Jedi fly back home to further the OT feel
- Minor edit to Anakin and Obi-wan’s dialogue to feel more genuine and jokey

And here’s the edit’s most radical change, the removal of the interplanetary Order 66 montage. Instead we just focus on our main characters. Other changes:
- Color correction
- New OT tracks for Anakin entering the temple, and Cody firing on Obi-wan
- No killing younglings
- The Utapau battle has been moved earlier so as to not distract from this sequence
- Similarly the Kashyyyk battle footage during this sequence has been cut
- Chewbacca replaced with a differently colored wookiee
- We don’t see Yoda climb up onto the wookiees

Thanks to everyone so far who has watched the edit, and for those who have left reviews!

With the release of Obi-Wan Kenobi, when’s a better time to check out an ROTS fan edit? Here’s some before and after frame comparisons to get you in the spirit.

Showcasing my new color grade and film grain, here’s my shot at turning a very digital and often dull looking movie into something a bit more colorful and filmic (and somewhat OT inspired, as you’ll see in the star destroyer pic).


What is there to say? By far the best edit of Revenge of the Sith out there. I believe this is the one that will satisfy the hardcore fans: it stays true to canon and seamlessly removes all of the excess while also reintroducing a series of absolutely essential deleted scenes, which I find exponentially better the movie.
All edits are TRULY invisible, and, especially music-wise, are all close to perfect, which is the hardest thing to do with the Prequels as the music is so exceptionally weaved together.
Last, but not least: the COLOR CORRECTION which is fantastic and brings the world slightly more in line with the one from the Original Trilogy, which is my main gripe with the original films...

Yes, I have edits of TPM and AOTC in the works! They won't be as extensive as this (and are bit closer to what Hal9000 already has), but expect the same approach in terms of a new color grade for both and some moments of re-scoring.

That's great! Can't wait for them to come out.

I was also wondering... do you ever plan to make an alternate audio track with the original score in places where you replaced it?

I hadn’t considered it until Hal9000 asked the same thing recently on OT. Initially I thought I’d never release this edit at all since it started as just a variation on other edits, but then it was stuff like the music that made me think it was unique enough to share. At this point though, there’s a lot beyond that which makes the edit individually mine. If there’s interest, I could explore that option down the line!

Well then that is just one more reason to be interested in your Episodes II and III!
Are you planning on reinserting some deleted scenes there too? I'm a huge sucker for prequel deleted material and thinks some of them do a lot in helping the story.

I think AOTC will have a couple yes but I'm not entirely sold on any of the TPM ones.

Plus I heard a rumour that an incredibly sexy man might be collaborating to release a sanctioned version of this edit with the original order 66 version and a dolby surround audio mix.

Can't say for sure though it's just a rumor I heard.

Are you still talking about Star Wars edits?

Possessed said:
Plus I heard a rumour that an incredibly sexy man might be collaborating to release a sanctioned version of this edit with the original order 66 version and a dolby surround audio mix.

Can't say for sure though it's just a rumor I heard.
Click to expand...

DominicCobb said:
I think AOTC will have a couple yes but I'm not entirely sold on any of the TPM ones.
Click to expand...

I think the only important one in TPM is the one of Qui-Gon destroying the droid that is following them when they are leaving Tatooine, which makes it clearer why they're running in the next one. I personally believe that, while Attack of the Clones is probably the least sharp of the three movies, it is the one where one can have most fun in editing. The amount of footage and deleted scenes gives so much to work with.

Yes that's the only TPM one I'm considering. And I feel the same way about AOTC, it's my least favorite of the series but there's a lot of potential where you can edit it into something really fun.
K