Once Upon a Time in America: The US Theatrical Cut

2020's been one lousy year.  I know I have other projects pending (RVKF2K first and foremost), but my health issues have persisted.  I have little sleep, and less imagination, so I'm putting all creative work on the back burner until I'm better.

But I still want to do something to ring in the new year - or at least, ring out the old one.  So a purely technical project is just what the doctor ordered.

The James Woods quote about walking out after 20 minutes could be read as "I wasn't in the first 20 minutes of this version, so I walked out" .

Good luck with this project.
M

The James Woods quote about walking out after 20 minutes could be read as "I wasn't in the first 20 minutes of this version, so I walked out" .

Thank you, my friend.  The funny thing - in this (mostly) chronological edit, Woods shows up about 35 minutes in.  Which, if you're familiar with how much time is spent on the childhood flashbacks of the long version, should speak volumes about how much of a hatchet they took to this thing.

I'm sorry your health is still a struggle, but it's good to see you around. All the best with the project!
M

Thanks so much.
M

As I continue to tinker with this, I find more and more bits and pieces that simply do not exist in the 251 minute version.  Sometimes it's a familiar scene from a different angle, or a different take.  Sometimes there's little bits of extra dialogue and so on.  This puzzles me.  The narrative had always been that the 229 minute version had a bad test screening in the USA, resulting in it being recut into a chronological 193 minute version.  But where did all this other footage come from?  Either this version was derived from a workprint Leone had been working on before finalizing things, or the Ladd Company had access to a treasure trove of discarded material.  It also begs the question of who was responsible for this.  The opening and end credits in this version are different from the long versions, but Nino Baragli is still credited as the primary editor.  The end credits also list the same assistant editors.  So either one of them was behind the cuts, or it was someone else who (perhaps wisely) went uncredited.   Either way, the existence of this material in this version could prove useful towards restoring an even longer version of Leone's vision... assuming someone at Ladd or Warner or whoever still has the original film materials in a vault, somewhere.

They probably had access to alternate takes and material.  You see alternate footage in made-for-TV versions and some pan&scans but I don't know how those kind of deals worked logistically.  It's also possible (but unlikely) that it's sourced from the super long version that Leone originally intended but never officially released, which Scorsese and co are still working on remaking (I hope).
M

This is the hardest bit of footage I've had to match up.  There's so many similar frames, they are looped in the Theatrical cut, and the 4:3 cropping makes it even harder to identify.  But I think I have it right.  Or at the very least, good enough to pass for the original.  What do you all think?

The frames I need to replace, in context:


My best effort at replacing them with their HD equivalents:

Man that last few seconds with the overheard gunshot are really rough on the VHS tape (audio and video).  A real shame as that's one of the more radically different sections.
M

Thank you.  I've been making some effort in improving the audio situation as well. It'll be messy, but better than what's presented.  @"TM2YC" , can you identify the name of the exact piece of music that's playing over that scene (and presumably, over the missing footage where the tape drops out)?  I'm sure I'll figure it out eventually, but your insight would be appreciated
M

You can download apps for your smartphone that identify music for you e.g. Sound Hound (you hold phone to speaker and the AI has a listen).  They can be pretty accurate but it's struggling with such a short piece and all the distortion.  I've ran it a few times and it either identifies it as ' Friendship and Love ', or 'Deborah's Theme'.  I'm very bad at music so I can't tell between the subtle differences in orchestration from the ending of the two pieces, compared to the VHS audio.

Alas, my phone isn't of the smart variety.  And I'm too brain-fried to even consider learning one right now.  I do appreciate the assist.  I think the little bit I patched in matches up all the same.  For the immediate future, my plan is to use that as part of an improved version of the mono track.  After I have all the video stuff done and synced, I'll try and do an all-around audio improvement, sourcing as much from the 5.1 mix as possible.  Of course, it'll revert to mono for the VHS-exclusive scenes, which I'll have coming out of the center channel.  If - and that's a big if - I can find more instances where I can match the music,  I might throw the OST into the front and/or rear channels to make things more tolerable.  I'd only attempt the 5.1 stuff last - I want to be sure the video side of things is solid.

I notice the VHS has the theatrical reel change "cigarette burns".  Have you considered copying them over?  It would probably be taking things too far and I found them to be distracting in the recent 'Mank' film but I had a go at blending one back in for my own "fun" anyway: 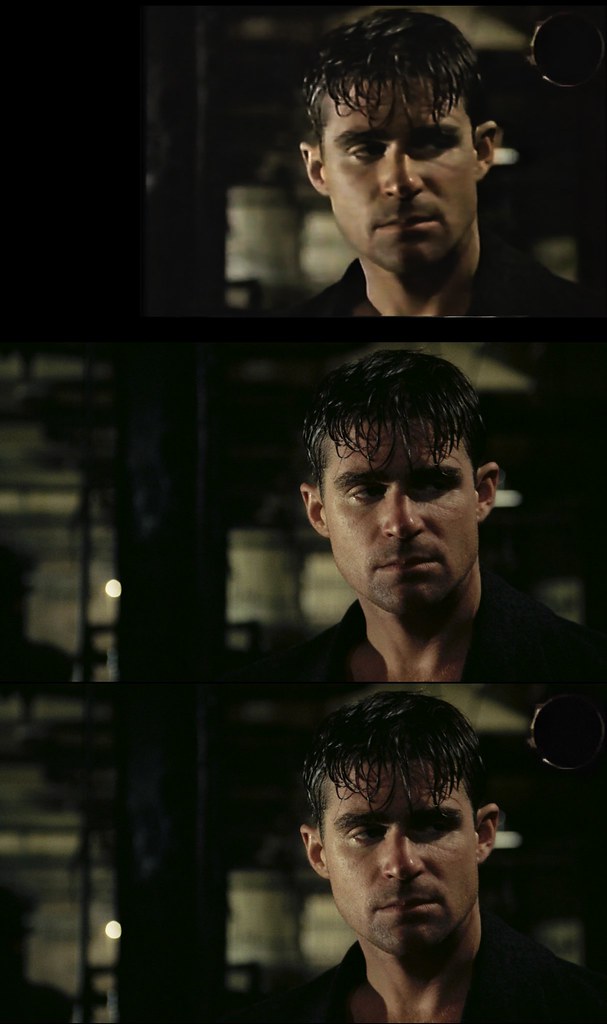 I also notice this version has complete dialogue and soundfx for the 2-minute baby hospital scene, which just had classical music in the long versions.  Interesting.  I wonder if this was original audio that Leone decided wasn't needed for his idea of the scene, or new dubbing they invented.  It sounds and looks like original audio.

There are changes like this alternate angle which are questionable as to wether they were part of the theatrical cut: 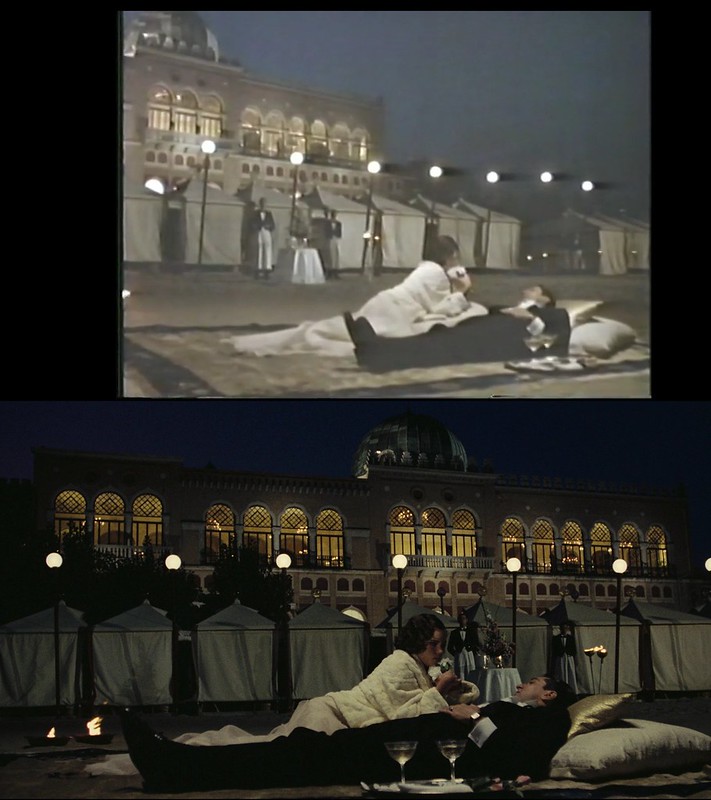 There hasn't been any noticeable change to the length or audio of the shot.  I reckon this was a change made to the VHS transfer purely for reasons of the original shot being awkward to pan&scan.  Going from a close up on Deborah's face, through a pan down onto the beach and finally Noodles spread across the width of the frame.  Without a 35mm theatrical print as reference it's impossible to know.
M

I have noticed the reel change marks.  They're a beautiful sign of a bygone age, but I think putting them in would defeat the purpose of this project.  They're a byproduct of the theatrical exhibition experience, not a deliberate aesthetic change made to Leone's work, so I think they're better off left omitted from any shots that have 1:1 equivalents in the Extended Director's Cut.

I haven't actually listened to all of the audio yet.  I'm kind of making that my reward for finishing the video sync.  The hospital scene always struck me as an interesting choice, looking forward to hearing exactly what was discussed.

The beach scene: We're two of the same mind.  For any shots that have direct visual continuity with shots from the long cut (in this case, the fade from the dancing), I'm matching up the proportions and placement of the shots within the 16:9 frame to approximate their position in the original aspect ratio.  I'm pretty sure that all the beach scene's dialogue used in the alternate angles is sourced from the same takes as the EDC.  However, I am not convinced that version was used just for the sake of the VHS.  Would they have gone to all the trouble of creating a new crossfade - for a movie that flopped no less?  Considering that all of the end credits and portions of the opening credits are squished horizontally, I suspect it's more likely that they would have just done the same for any shots that were "too wide" for pan and scan.

Regardless, I'm sticking to this rule: Any and all alternate angles present in this VHS version will be used in lieu of their HD counterparts.

matrixgrindhouse said:
I'm pretty sure that all the beach scene's dialogue used in the alternate angles is sourced from the same takes as the EDC.
Click to expand...

I noticed one randomly:

The former features a new different close up on Noodles speaking, the latter is on Deborah so we can't see Noodles talking.

You migt already have noticed that in the scene where the kids are pitching the salt idea, that the chief mobster speaks English on the VHS and Italian on the blu-ray (again we see him speak the new lines on the VHS but not on the blu-ray).


matrixgrindhouse said:
Would they have gone to all the trouble of creating a new crossfade - for a movie that flopped no less?
Click to expand...

They did go to the trouble of re-framing every shot in the whole thing individually for VHS, so one extra crossfade wouldn't be much more of a stretch. But once again I've no idea how these things worked logistically but I imagine studios had a dedicated pan&scan/VHS team (or hired in a third party specialist). I doubt those teams would care if the movie was successful, or not, wether it was good. or bad, they'd just want to do a professional transfer job for their employers.
M

Quality points all around.  Great find regarding the dialogue difference.  But as you said, since we don't have access to an original aspect ratio version of the theatrical cut (which would pretty much make this whole project pointless anyway), I'll have to take my best guess.  And I figure, if in doubt, the theatrical cut would probably use whatever Sergio's version didn't.
You must log in or register to reply here.
Share:
Facebook Twitter Reddit Pinterest Tumblr WhatsApp Email Share Link
Top Bottom