I would consider myself to be a James Bond fan, but I don't know that I've actually seen every minute of every movie. I've seen all of the Brosnan and Craig movies in theaters, and I know I watched all of the Connery movies on VHS at some point. I think I've seen the rest of them on TV at some point, but many not from start-to-finish. I'm going to remedy that leading up to No Time to Die! I'm going to try to watch them all in chronological order, hopefully before the premiere.

Casino Royale (1954)
Starting things off weird, James Bond's first on-screen appearance was a made-for-TV adaptation. Played here by Barry Nelson as an American spy working for the CIA ("Combined Intelligence Agency", not the actual CIA for some reason?). Even setting aside the character's nationality, Nelson has none of the natural charm that Connery would bring to the role 8 years later in the film franchise. Still, the story is well paced enough to keep me entertained for its short 50-minute runtime. Edit: I forgot to mention the weirdest part! Bond orders a Scotch and water instead of a martini!

Dr. No (1962)
A lot of the tropes we've come to love started right here: the turn-to-camera shot opening the movie, the silhouetted dancers in the opening credits, the classic "Bond, James Bond" introduction, the shaken-not-stirred martini, and SPECTRE. The story gets off to a bit of a rough start with pretty hard shifts between the title, gun barrel shot, credits, and first scene, but from there on things feel more natural. With a modern eye, the story does feel a little stilted and it's funny to see what was considered to be such a sexual movie at the time, but really my only complaints are Dr. No himself and Miss Taro being played by English actors. Strangely, they did actually cast Asian people for the majority of the background flunkies. Overall, I did have a good time watching this one and I'm looking forward to the rest of this marathon.
Last edited: Aug 26, 2021

Can't believe there wasn't any Bond thread yet! Glad you enjoyed Dr. No, it's still one of my favorites and I appreciate its smaller scale factor. The first three Connerys are still the gold standard for the saga, in my opinion.

From Russia with Love (1963)
Well, apparently I haven't seen as many of these as I thought. This was my first time watching this movie after all. Much more low-stakes than some of the later movies, just a loose sequel to Dr. No with SPECTRE looking for revenge and Bond meeting a Russian "defector" with some cryptography something (sorry, I zoned out during the explanation of what exactly it was). Just some fun spy hijinks and globetrotting! The best part was seeing Q for the first time, even if the briefcase full of stuff wasn't that impressive.

FRWL is one of the most solid and serious in the series, almost Hitchcockian (the influence of North by Northwest is more than apparent), and with barely any of the cheese that would later dominate the franchise for decades. Next up is my personal favorite of them all: Goldfinger. Hope you like it.

It would be interesting to see these early Bond films being trimmed down to have much better pacing.

I'll enjoy reading these countdown reviews @asterixsmeagol . I did my own countdown in July 2019 to time with the original release date :

Hopefully your countdown actually has a new Bond film at the end of it.

Maybe I should request to merge my thread with yours? Or would that jinx us?

Goldfinger 1964
Q might be my favorite character in the series, and his super spy car is way more impressive than the briefcase with hidden coins from last time around. Plus we get some nice Q snark. The plot is fun, and a lot of the dialogue is crazy. "Skin suffocation" from gold paint, "Pussy Galore? I must be dreaming!", a bullet through the fuselage would depressurize the plane and suck them into space, etc. But that's the charm of a Bond film, isn't it? No complaints there! Is this the movie with the most "Bond Girls"? There's the girl in the opening, the two sisters, Pussy Galore, and if you stretch it, the aerobatic pilots. My only real issue with this movie is that Goldfinger himself is kind of boring, just a guy who likes money and gold, but he does get some classic lines ("No, Mr Bond, I expect you to die!") so it's not too bad.

asterixsmeagol said:
Is this the movie with the most "Bond Girls"? There's the girl in the opening, the two sisters, Pussy Galore, and if you stretch it, the aerobatic pilots.
Click to expand...

Definitely a contender, but On Her Majesty's Secret Service still beats it!

Thinking some more about Goldfinger's plan to make all of the US gold reserves radioactive for 58 years... This movie was filmed 58 years ago! (Filmed in mid-1963, released in January 1964)

Thunderball (1965)
This movie has everything: Doppelgangers, SPECTRE, spy gadgets, an eye patch, an underwater plane. This was the first Bond film I saw as a kid, and maye that's coloring my judgement, but it is the perfect movie. My favorite bit, which I never noticed watching on a VHS tape but which is perfectly clear in HD: The bomb is labeled "HANDLE LIKE EGGS" 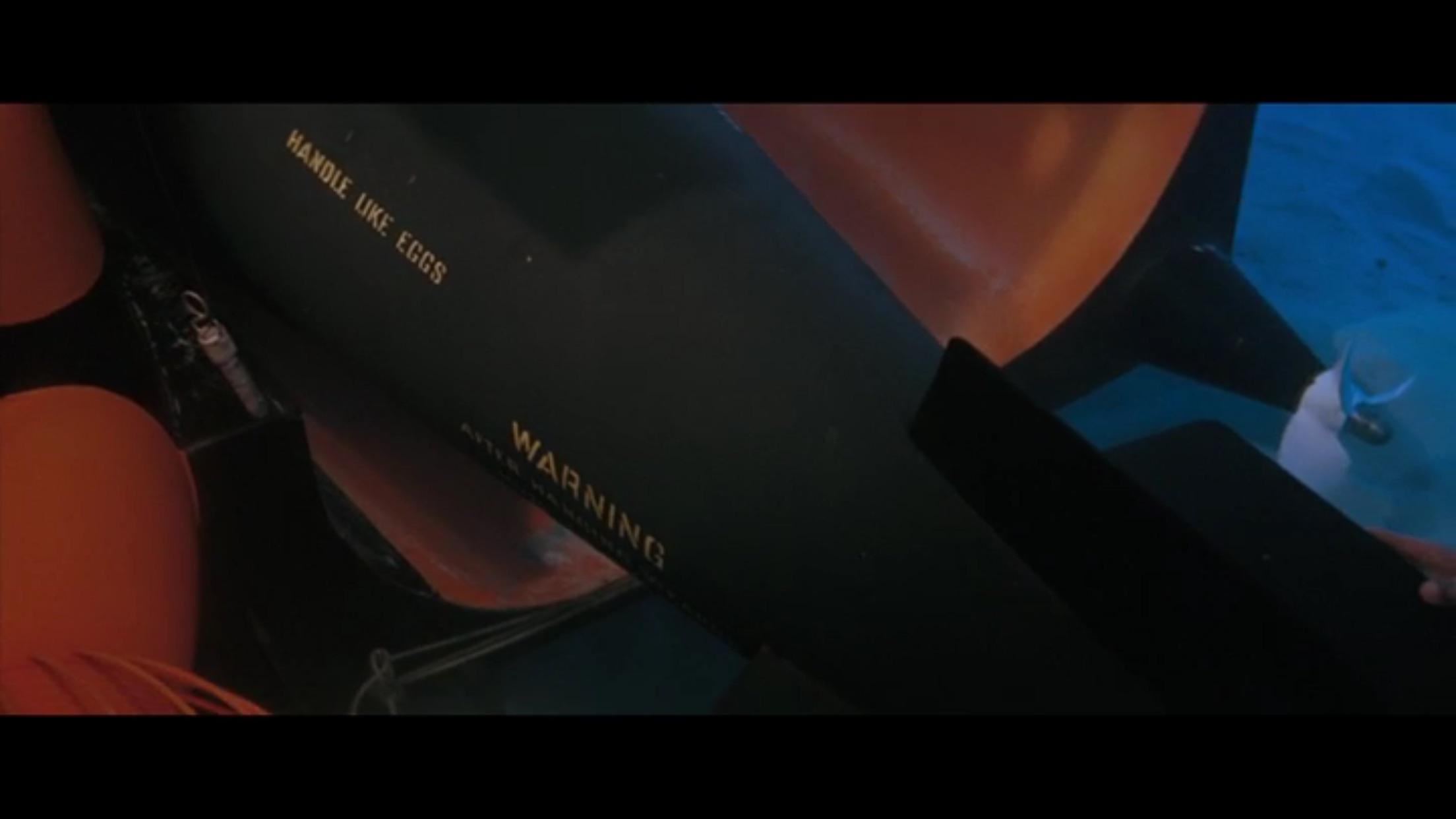 I'm not much of a fan of Thunderball. It has some great moments but overall I feel it DRAAAAAAAAAGS. I rate it way below the first three. I get the feeling that since they had a bigger budget this time around they decided to show off, so the to-the-point approach of the earlier, cheaper ones was abandoned, pacing be damned.

Casino Royale (1967)
A comedy starring David Niven as James Bond. At least I guess it was a comedy? I did laugh quite a bit while watching it but more because I didn't know how else to react. The plot total nonsense and I had no idea what was happening for most of the movie, and the acting was pretty bad with the exception of Peter Sellers.

asterixsmeagol said:
Casino Royale (1967)
A comedy starring David Niven as James Bond. At least I guess it was a comedy? I did laugh quite a bit while watching it but more because I didn't know how else to react. The plot total nonsense and I had no idea what was happening for most of the movie, and the acting was pretty bad with the exception of Peter Sellers.
Click to expand...

I love this lunacy of a film, and I'm not apologetic about it. Might be the most "sixties" movie ever made.

Season 3 of Remington Steele is where the series gets really good, and there are a handful of episodes that take place in Europe.

Season 3 of Remington Steele is where the series gets really good, and there are a handful of episodes that take place in Europe.
Click to expand...

Weren't they self-contained episodes about one hour long, though? Or was there any multiple-parter? It's been so long!

I just did a quick check on Wikipedia and there are several 2-part episodes. The best fit is probably the Season 4 premiere, where Laura Moneypenny works with Scotland Yard MI-6 to track down a missing Steele Bond.

You Only Live Twice (1967)
Another movie where I love almost everything. We start off in space with a giant mystery spacecraft that captures a whole American capsule, severing a spacewalking astronaut. Then we see Bond get "murdered" in bed with a lover, and I love that the guy who finds the body says it's how Bond would have wanted to go. After the excessive underwater scenes in Thunderball, I wasn't too excited to see Bond don a wetsuit, but thankfully it was just a couple of seconds this time around. I also really liked the wordplay with lox in both its senses as smoked salmon and liquid oxygen. I had forgotten that Donald Pleasance played Blofeld in his first "full" on screen appearance, that was a fun bonus! I had remembered him always having been played by Charles Grey, but confusingly Grey plays Dikko Henderson in this movie!

Love this thread. I have the big Bond BD release they did a few years back and started watching them from the start (so not either Casino Royal variants). Enjoying the reviews but I definitely agree with Dwight re: Thunderball, it starts out good imo, but man.. does it drag. Maybe that underwater sequence would have been exciting back in the day but....

So I need to pick the marathon back up because my buddy I was watching it with bailed at Live and Let Die, so I might just pick it up from Sir Roger Moore's first one and go from there. I know that Sir Roger is many people's least favorite Bond, but I grew up with as the 'current' Bond so he'll still always be my favorite, goofiness and all.
You must log in or register to reply here.
Share:
Facebook Twitter Reddit Pinterest Tumblr WhatsApp Email Share Link
Top Bottom