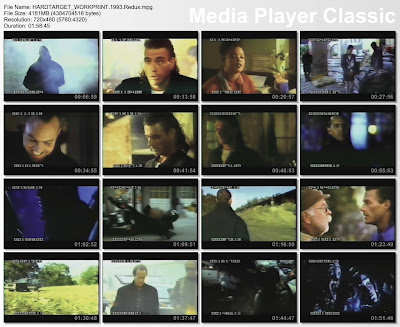 SPOILERS AHEAD! (info courtesy of IMDB)

The Director's Cut version is 116 minutes long, including about 20 minutes of graphic footage originally removed to avoid an NC-17 rating. Scenes Included in the 116min Directors Cut Include:
Additional dialog at the beginning where Van Cleef tels Lopaki (the guy with the arrows) that he shoots like a buffoon and next time he will charge him double.
The ear cutting scene is intact.
A three minute scene of dialog between Natasha and Chance which takes place in Chance's apartment. She is patching him up after the beating he got while looking for dog tag, he puts the moves on her, she leaves then comes back saying she has changed her mind. A still from this scene appears on the liftout that comes with the American DVD release.
While Fouchon is playing the piano there are several shoots of news or documentary footage showing elephants, deer etc being shot down by hunters. This is probably the most disturbing scene in the film.
Before Fouchon drops the letter opener on the floor at the coroners house he has additional dialog that describes what happens when a hunter dies in Africa.
When Roper dies he is shot then gets up and is then hit with another volley of bullets.
When Chance and Natasha firt meet up with Douvee and Chance jump around and start singing before Chance introduces Natasha.
Most of the deaths in the Mardi Gras Graveyard are longer and juicier (people being shot 30 times instead of 10 etc)
In the directors cut the final fight between Chance and Fouchon (in which Chance utters the line "Hunting Season Is Over") is missing. Instead Chance does the runnup as Fouchon shoots, kicks him into the garbage pile, throws the grenade and Fouchon is blown up.

I know its nc-17 but redux is the name of the workprint.

Dont forget theres a cartoon intro first so it does work out about 1.55 mins.

The cartoon intro would the the video telling viewers that it's not a finished film yet and asking them to provide comments on the film after viewing? If so it probably means that the ones who are listing it at 1:55:20 aren't including the intro. Thanks. I've only got the 128 minute version of the workprint but I've been after this one too. Good to know that I don't have to track down two more versions.

BTW it looks like you've got the remastered version of the workprint. That's great, much cleaner looking than the other one.
D