Godzilla VS Kong : The Kongdensed Edition 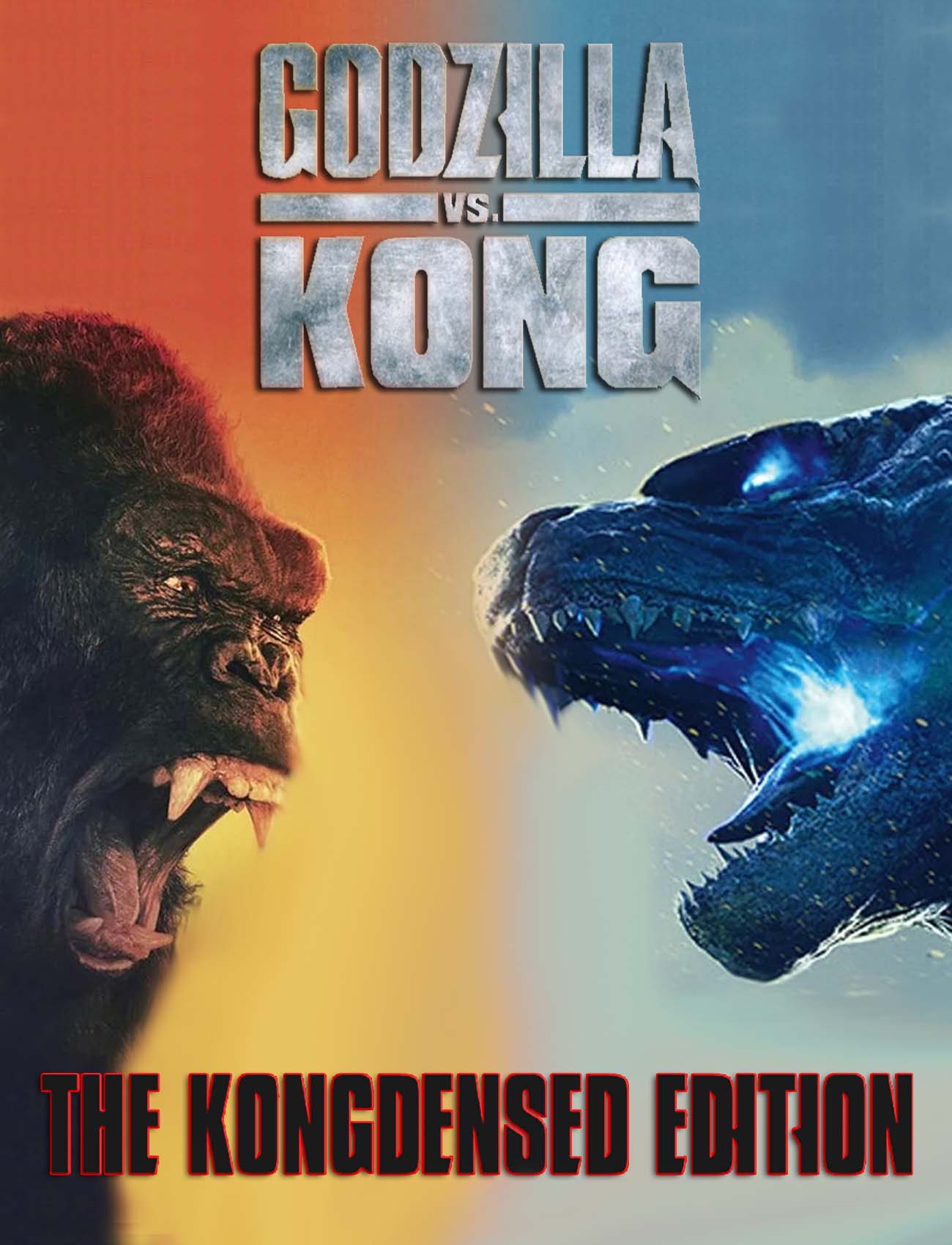 To make a version of the movie for those of us that are not fans of the Scooby Doo B-plot with Millie Bobby Brown (MBB). She only appears in a brief cameo now.

It was important to keep the flow of the main plot while trimming a lot of fat. Lots of trimming even during the main plot; cutaways, repeated dialog etc. It was crucial to me that it still felt like an actual movie while watching this; not just a supercut of the battle scenes or leave you feeling like pieces are missing.

• Julian Dennison’s name crossed out in the credits

• After the credits, the movie opens with the Apex commercial. Cut babbling Bernie scenes. Entirely removed awkward conversation with the mustache guy in front of the computer. Used a couple shots of the Hong Kong transport HEAVs. (I wanted to show the Skull Crawler egg/tank here but it isn't obvious what it is without MBB's dialog so I kept it out.) Trimmed Bernie escaping shots and linked the plane explosion to the theatrical cut of him getting nearly blasted with fire, so he dies here now!

• Tweaked the newscast: MBB is now watching at home instead of school. Used shots (Close up of her room and newspaper clippings etc) from a later scene. Changed the CNN banner to read "Hundreds dead, dozens injured". (Just 8 dead? Damn man Godzilla has got some skills if he can wreck that much stuff and only kill 8 people!)

• Monarch Relief Camp: Removed Dad's line "that podcast is filling your head with garbage!". Also MBB is completely gone from every remaining scene and shot after this scene. (This obviously means later scenes needed to get re-worked to accommodate for this change… )

• Removed kiss between Ilene and Nathan

• Cut Jia looking sad after Ilene agrees to let them take Kong. I kinda like Jia and saying “this is our home”... but, ending on Ilene’s expression seemed to match the cut to the music in the next scene

• Cut shots of Ilene while approaching Jia in the rain

• Cut Maia's lines: "is she supposed to be out there?" and "did the Monkey just talk?".

• Cut Ilene kissing the back of her own hand when comforting Jia (huh???)

• Cut some dialog between Nathan and Ilene before Godzilla attacks

• Cut Maia's line “then dump him! Dump the Monkey!” and Ilene’s response

• DELETED Nathan pulling release mechanism on Kong’s chains because KONG IS KING AND HE ALWAYS BREAKS HIS OWN CHAINS!!!!

• Flipped direction of shot when Kong climbs up and turns the boat over, cut shot of Nathan and Maya Simmons inside ship > goes right to Kong standing up and breaking collar. (A little chunky, but ehhh it keeps the pace up nicely and there’s less human!)

• No more depth charges. Kong only gets back to the surface because Godzilla was playing with his food...

• Cut the length of the flashing strobe sequence when they enter the portal to Hollow Earth.

• Removed dialog and lots of cutaways to the humans during the Hollow Earth sequence. Yeah I get it; we’re in a beautiful fantasy world. A handful of cutaways and the line "its beautiful!" is more than enough to get the point across.

• Kong now overcomes the Warbat without human help because KONG IS KING AND HE BEATS RANDOM ENCOUNTERS ON HIS OWN! If he struggled this hard against this creature and couldn't win without interference, how could he possibly hope to stand up against Godzilla? Ultimately very few things can win VS Godzilla, but c’mon! Makes Kong seem weak taking away his victory like that.

• In the Mecha’s death pit, insert shot of Ren in the pilot helmet instead of cutaway of MBB reacting to almost being eaten by the Skull Crawler. (Cuz she's GONE now!)

• Trimmed length of robot downloading the energy and ENTIRELY removed the Apex goons holding the main characters up at gunpoint. (Who are unarmed and not trained in combat.) This whole stand off stemmed from Ilene being upset that they are taking a sample of the energy– THIS IS THE ENTIRE REASON YOU CAME DOWN HERE. Why are you upset that they are doing exactly what they said they were coming here to do? Granted Apex left out the part of using it to power a giant robot, they did say they wanted to power a weapon. They were pretty transparent about their plan to get the energy from the start. Apex wants humans to win, so why make aggressive moves against people that are here to help you with your plan? Besides, Kong is right there watching, what do you think will happen if you attack them?! This also means the following line from the pilot “this way sir!” when running to the HEAV actually makes sense now. Seems like a big change of heart to hold up unarmed civilians at gunpoint then suddenly care about their well being and safety moments later….

• Cut Nathan throwing a rock at the monster bird. It was a useless gesture anyway.

• The battle in Hong Kong is all one scene

• Cut line "we're about to breach the vale! Hold on" and shot of Nathan screaming

• Cut line “looks like round two goes to Kong” I LOVE Kong but that was a little silly. Us super nerds already know that anyway. Its nice not to hear people chattering away during the epic sequence. Stay focused movie!

• When Simmons is monologuing about his “beautiful amazing dream” some minor edits to the dialog, zoomed in on him to hide people that shouldn’t be there in the background (MBB). Add Ghidorah chittering noises as Ren looks on in confusion. Used shots of Ghidorah’s skull and Ren getting fried instead of cutaways to the Scooby Gang. Also the light inside Ren’s control booth turns yellow when Ghidorah is taking over.

• Trim Nathan’s line “what the hell is that?” Cut shot of Jia running off screen. Horizontal flip a couple shots to match the direction Mecha is facing in the following close up of Mecha smashing Godzilla.

• Cut Ilene’s durpy expression after Nathan’s “aha!” when he boots up the H.E.A.V moments before saying “you better get some distance” and removed the subtitle of “Coward'' from the bottom of the screen

• Nathan now sacrifices himself in the H.E.A.V to restart Kong’s heart– thus meaning he needs to be trimmed from shots after this…

• Because of Nathan's sacrifice in this version, I have to crop way too tight on the shot of Jia and Ilene in the aftermath of the battle to sorta hide Nathan being gone, but you can still see his collar.... but its a lot of work for a few seconds and we all know how things actually happen so.... ehhhhhh.... This will probably just stay slightly gross looking

• Entirely re-did the music & audio during the ending sequence in Hollow Earth, used a clip from the Hollow Earth scene from earlier. Removed the subtitle of “Home” from the bottom of the screen. Used a vine creak sound from Peter Jackson Kong during T-Rex scene. Also since Kong roaring at the Apex goons for holding people up at gun point is gone, I re-used that sound in the very last shot of the movie.

• End credits have been sped up to keep the run time as short as possible. Nobody can read them all even at normal speed anyways. So if you want to read them, pause it or go look on IMDB.


Thank you so much to EVERYONE that made this possible and for all the hard work put into making this movie a reality in the first place. My inner child was thrilled to see the coolest version of my favorite characters smashing everything and being awesome!
Last edited: Apr 18, 2022

Hi Friend!
If you can upload the scene to youtube and post it here, more editors will see the scene and let know know whats possible

@fRiEnD I added your edit info and cut list to your OP. That might garner some more interest for your edit.