Doctor Who: Listen (Only Once) by Zarius 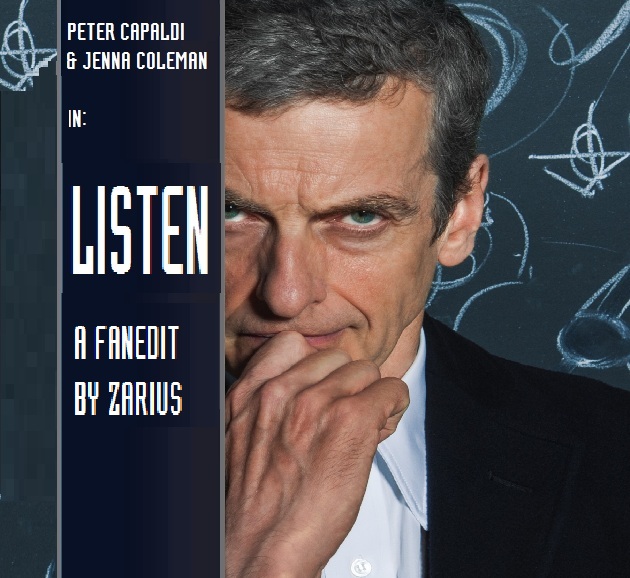 A twenty-one minute trim of the Eighth Series Doctor Who episode &#8220;Listen&#8221;, focusing entirely on the incident at the boy&#8217;s home and greatly shortening Clara&#8217;s disastrous date with Danny Pink so they only screw up just the once. I have also repositioned small portions of the episode&#8217;s opening to the end


High quality version of this edit has been uploaded to MEGA. Anyone wanting to see it just contact me

Uploaded it to Vimeo. High quality version available on MEGA.

Anyone interested? I get there's a backlog, but it is available on the first post for anyone to view, and I really put a lot of work into this one, I even braved through a toothache at the time to get it done to boot. Would be nice to know all the work was'nt for nothing.

I just watched it. It was good. Different than the original episode, but fun to watch as a short. I liked all of the cuts and the quicker pace was perfect for people short on attention. It even hit some beats better than the original like when the doctor steals the coffee.

The one change I would have made with it was the part about evolution on the end. That kind of feels more like the start of something then the end of something. I would cut that part out and go straight to shot of the doctor floating on top of the box.

Thanks very much mate, most appreciative of your review.
Yeah, I think what I got in my head with the end was that The Doctor was "making reference" to how he evolved young Danny by having him confront his fears and such. If you feel it makes more sense as an opening than a closing I can definitely take it out in the rebuild.
K

You know, If that's what your going for, you could keep the audio and just use a slowmo shot of young danny pink, maybe fade to an older dany pink. It's a good Idea, it just didn't come across from him writing on a chalk board. and then he's outside in the next shot was kind of weird. I was expecting him to like come out of the box, but he was already out. Then when I saw him on top I expected him to continue what he was saying before, but instead he just broke the forth wall.

Zarius said:
Just letting you guys know that I'm presently re-building this using a 1080 source (the last version was a 720)
Click to expand...

Please explain what your previous and current source are, thanks.

TV's Frink said:
Please explain what your previous and current source are, thanks.
Click to expand...

I was told during the evaluation of my Sherlock edits that my edits should probably be in the 1080 range (although I am having tremendous trouble uploading them as a result, where as I don't have much problem with 1280 size videos)

Zarius said:
I ripped the DVD last December using a 1280x720 size option on the settings with 5000 bitrate. This new rip had the settings switched to an 8000 bitrate and is in 1080 quality.

I was told during the evaluation of my Sherlock edits that my edits should probably be in the 1080 range (although I am having tremendous trouble uploading them as a result, where as I don't have much problem with 1280 size videos)
Click to expand...

DVD is 480p. Which of the following are you doing?

Of those, option #1 is a bad idea. Keep it at or less than the source resolution. Option #3 is a really bad idea, and something we do not condone. Only option #2 is acceptable here.

There is nothing wrong with 720p if you were actually working from a Blu-ray or legal HD digital source. I'm not sure why the reviewer told you that they needed to be 1080p. DVD resolution edits (480p) are also completely acceptable if the quality is consistent with the source.

To explain why I asked...I think your terminology was confusing. A source is a DVD, a Blu-ray, a digital download...or a pirated download. A source doesn't change resolution, but it sounds like you re-ripped at a different resolution. That's not a source change.

TV's Frink said:
To explain why I asked...I think your terminology was confusing. A source is a DVD, a Blu-ray, a digital download...or a pirated download. A source doesn't change resolution, but it sounds like you re-ripped at a different resolution. That's not a source change.
Click to expand...

Sorry if I befuddled you. I'm quite thick when it comers to editing terminology. I'm always using the wrong words.


ThrowgnCpr said:
DVD is 480p. Which of the following are you doing?

Of those, option #1 is a bad idea. Keep it at or less than the source resolution.
Click to expand...

It was option one and this has been well noted. Since posting my update, I changed my mind and went with the original resolution. I managed to upload it with considerable ease.

Uploaded the new version (regular size, no 1080) and re-submitted.

Previewed this short and it was nicely done. The children's home section felt like a nice self-contained mini-adventure. You'd not guess that there was ever another half to the episode. Visual and audio edits are smooth.

Congrats! I'm looking forward to checking this out.

Thanks so much for approving TMTYC. It won't be the only series eight short from me, I can assure you of that

I prepared a DVD cover that I'll be submitting also.

Short now uploaded to Vimeo and is on the first page of the thread, can now be used for embedding on it's own page when it goes up on IFDB.

I watched this last night and thoroughly enjoyed it. The opening works much better and the credits kicking in after Capaldi's line about nightmares is great. I watched it twice to see if I could come up with any technical advice but frankly the cuts were executed seamlessly. I actually just got into the show when Capaldi started and I really like it. You picked one of my favorite episodes and the short works great. There's no sense of stuff happening that you're unaware of. Well done and very enjoyable.

Thanks for your review chum. Glad you have an existing thing for "Listen", a fondness for how the material plays out always helps you keep a sharp eye on what can go right and wrong, and I'm glad to hear it was all right.

So I finally got around to watching this. Very well done!

Since "Listen" is one of my all-time favorites, I was worried that any changes to the episode would feel like the edit was messing the episode up. But instead, nothing is contradicted from the original source material. This is just a very smooth, elegant story that focuses much better on the emotional elements of the Clara/Danny relationship, and using the adventure as a backdrop for that.

No complaints on the audio/technical end of things. Very seamless.

Thanks for sharing! I look forward to watching more of your edits soon.