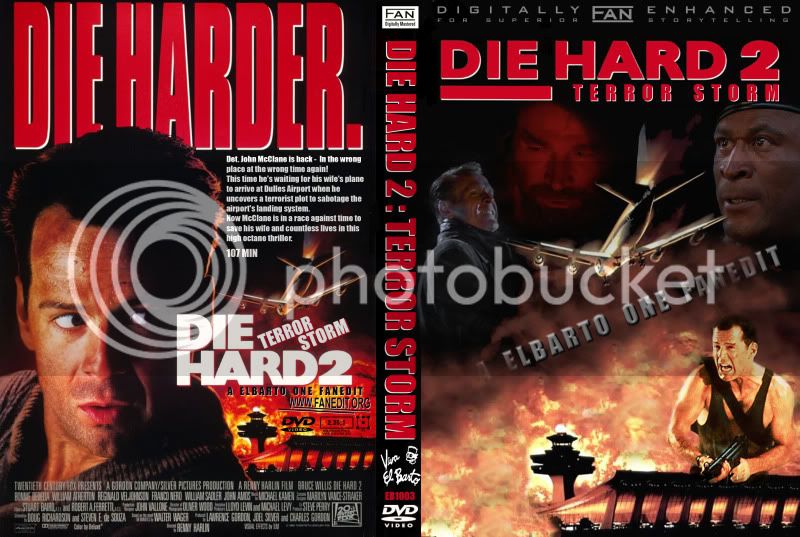 Fanedit Details: I have always enjoyed this film but it was my least favorite of the original trilogy. This edit trims the fat to tighten up the dialog and remove silly over-the-top moments that hurt the film. The most noticeable change is the complete removal of the Dick Thornberg reporter character from the film. Otherwise its just minor tweaks throughout to bring the film more in line with the other entries in the series (mainly 1 and 3).

Removed close up of exploding hairspray can in baggage shootout

Removed McClane line(s) "what is this, a tag team?"
"...on its way to cleveland"

Removed McClane line(s) "...this is just the beginning"
"how can the same thing happen to the same guy twice"

Removed Barnes line "...who will watch yours"

Removed Robert Patrick hesitation to kill barnes (its like he waiting for McClane to shoot him???)

Added scene of crowds rioting/panicking in airport after first plane crash. Now we get the impression the civilians are fearful from all the explosions/shooting/etc going on at the airport

Toned down Esperanza's plane coming at McClane while he is coming out of storm grate - now we get the implication that the plane is moving faster and might actually hit him rather than the "slow tire" coming at him at 30 mi/hr.

Toned down/sped up grenades in cockpit scene. in the original the grenades take almost 30 seconds to explode. Now McClane immediately gets in the chair and ejects this way the scene plays out more realistically IMO... even though the grenades still take too long (15 seconds).

Removed close-ups of mercs swapping their red "live ammo" for blue "blanks". this was way too obvious and its show again when McClane discovers it. Now we discover it around the same time as McClane.

Remove McClane jumping 18 wheeler on Snow Mobile - why was this even filmed? its like a 2 second clip and arent they are out in the woods???

End Credits altered to include me :smile: and add "terror storm" subtitle

Special thanks to Boon23, Lewis886 & JasonN for answering my never ending editing/authoring questions!

I thought about that sub (58 Minutes) but since the film is 1.5 to 2 hrs I didnt think it would work. and since I wasnt editing it to follow that original story I opted against it. Thanks though.

Stuart calls the tower and says that Esperanza's airplane will be arriving at Dulles in 58 minutes, and that the airplane is not to be met by anyone, and that it will land on a runway of his designation, and at the same time, he wants a 747 cargo conversion, fully fueled, placed at his disposal.
Click to expand...

Renny or no Renny, the film isn't that bad. It's only marginally inferior to the first one, in my view. Btw, check out Roger Ebert's review!

boon23 said:
from the imdb synospis:

Stuart calls the tower and says that Esperanza's airplane will be arriving at Dulles in 58 minutes, and that the airplane is not to be met by anyone, and that it will land on a runway of his designation, and at the same time, he wants a 747 cargo conversion, fully fueled, placed at his disposal.
Click to expand...

A-Ha, now it makes sense. I'll re-evaluate it as a possiblity. However, "58 minutes" is the story that was adapted to make Die Hard 2. Since I havent read, nor plan to read that story, I dont know if my edit follows it. Besides I was looking for something snappy and semi stupid like "speed 2: cruise control" for whatever reason. I was thinking maybe "Die Hard 2: Terror Storm" or something along those lines. Again, suggestions are welcome


theslime said:
Renny or no Renny, the film isn't that bad. It's only marginally inferior to the first one, in my view. Btw, check out Roger Ebert's review!
Click to expand...

I dont have a huge problem w/ Renny Harlin - maybe I am in the minority but I feel he's a decent action director. Sure he can get silly but IMO he's better than Michael Bay (excluding 'The Rock').

I'm definitely going to watch this one. Die Hard 2 is the only one my girlfriend hasn't seen. Maybe we'll watch this version of it! Her favorite is Die Hard 3.
D

Looks really cool. I especially found the Thornberg scenes a big annoyance in the film so getting rid of them is good.

superman4thefinalcut said:
I'm definitely going to watch this one. Die Hard 2 is the only one my girlfriend hasn't seen. Maybe we'll watch this version of it! Her favorite is Die Hard 3.
Click to expand...

DH3 is a really good one but theres a charm about the original that never gets old. Its probably Hans Gruber just being one of the best villains ever

Many people disliked DH2 but I never had a big problem with it. I felt it was way better than LFODH - but Uncanny Antman's version is definitely better than the official theatrical and unrated releases.

This edit was more about me having fun tightening up a film I already enjoyed. The main plot remains intact here.

Thanks for the interest, Demolition Man & Supes4 :-D

theslime said:
Is Die Hard 2: 107 minutes to live too cheesy?
Click to expand...

Not at all, but I have already completed new title cards and a dvd menu that read "terror storm" so, too late :smile:

Its been a long time since watching Die Hard 2 prior to this edit. It probably wasnt long after the movie was released. I remember enjoying the film for the most part, but didn't really remember much, aside from some scenes that were memorable to me for some reason (throat slashing in truck, icicle in the eye & magazines full of blanks). I was pretty excited to watch this edit, with no expectations. After I started the DVD, the movie stylings of the late 80s and early 90s started to rush back to me. I could tell, why I didn't remember the movie that well.

The editing here was VERY well done. No hard cuts whatsoever, and I could not tell that this had been fanedited (especially since I have not seen the movie in a while). The removal of William Atherton's character was a great move. I would have liked to have seen a few more cheezy lines gone. Especially from Denis Franz's character, and the janitor guy, but all in all, great job in toning down some cheese, and tightening it up.
Editing: 10 of 10
Entertainment: 7 of 10 (and after realizing what has been removed, I would probably rate the original a 5 or 6 now. So while this is still no masterpiece, its a fun action crime flick. For those of you that are really into this genre, you will get a big kick out of it)

Image & Video Quality
Image quality was great. The additions to the credits were really nice too, and it looked like they were a part of the original
Video Quality: 10 of 10

Presentation
Cool DVD. It comes with menu transitions, and animated menus. Nice work. We also get another elbarto1 DVD cover. No DVD extras, but everything else was great
Presentation: 9 of 10

Final Result: 9 of 10 for me
A cool watch for me, and I could not tell at all that this was a fanedit. So, as I mentioned above, as this is still no masterpiece, I think it is really well done, and it is an improvement over the original. I will happily watch elbarto1's fanedits in the future

Wowzers, now thats what I call a great writeup! Thanks a ton for the review Throw and I am pleased you enjoyed it!
C

Did you cut out the fake looking angle of McClane flying up into the air from the ejector seat? You could always just cut from McClane starting the ejector seat to the people outside ducking from the explosion and then back to John's parachute deploying in the air.

That way, you'd get that cheesy looking effect out as well.

No, its still in there.
C

Not only is it cheesy looking, but he does back flips in the air, something that wouldn't happen.