Azazel - a CBB fanedit of FALLEN

Fanedit details:
Fallen is already a well made horror thriller in its original version. It has depth, thrilling atmosphere, good acting and some unforgettable moments (move-by-touch and Time-is-on-my-side anyone?). Still the narrative and the rather unsatisfying ending don't make it a classic. By turning the focus from Azazel, who tells the original story, to Hobbes, the cop that hunts him, the mood of the movie is changed a lot. The moments when Hobbes is followed are more scary and the moments of silence have way more depth. With the cats gone and some rather stupid discussions deleted, it mounts into an all new and exciting ending.

The changes:
- deleted all of Azazel's narrative voiceovers
- deleted the beginning, started with Hobbs
- replaced title credits with my own to get rid of the Rollign Stones song
- deleted Azazel watching Hobbes when he enters the police station
- cut a bit of Hobbes' checking out the empty house.
- cut the cat from watching Hobbs studying demonology.
- deleted Hobbes' "Come on out" speech
- cut Stanton's "what are you talking about" speech
- trimmed Azazel's roleplay as Jonesy
- cut Azazel/Jonesy hunting Hobbes in the house
- deleted the cat
- created new ending


Your intention for this fanedit:
Being always disappointed by the cat thing, the Stones songs, Denzel's uninspired voiceovers and the somewhat disappointing ending, FALLEN never ranked too high in my list of best movies, yet it had some great moments that made it worthwhile for me to think about changing it. I wanted most of all to let Azazel not win and get rid of the stuff that bothered me. In the end, all the narration went bye-bye, which was a difficult undertaking sound-wise and the plot was changed to make the new ending ending possible.

Hardware and software information:
Hardware:
Windows XP computer
with an X2 6000 dual core cpu
and 4 GB of RAM on an ASUS board

trailer:
[vimeo:2tkr6rae]
this will be available within the next days... 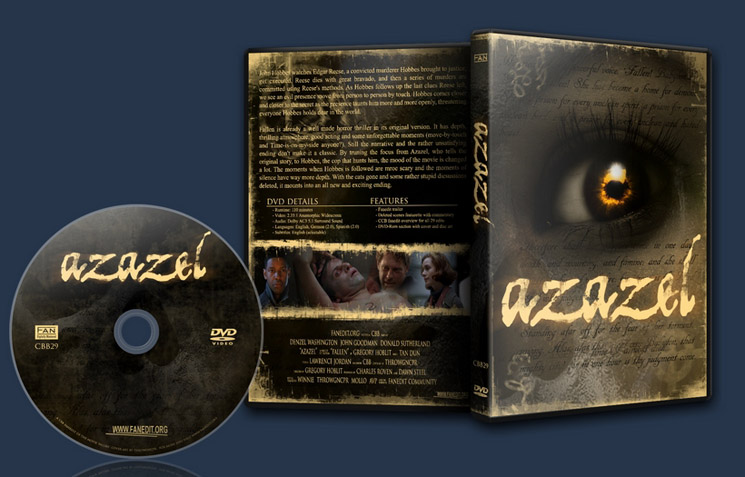 DVD uploaded to RS on linktalk

trailer looks fantastic!!! I am really excited to see this one

Boon, ever since I saw this show up in your sig, I thought "Damn, another film I wanted to get to eventually!"

Reading your list though, I cannot wait. All the little things I wanted to do, plus a few great ones that hadn't thought of.

I too always thought this was a great film, hampered by just a few missteps.

Looking forward to this one very much.
J

Fallen was a good flick but it's been a while since I've watched it. I know you'll do a top notch job Boon.
J

perhaps i'm in the minority, tho.

Great Boon, I bet this is going to be a corker!!!

as long as you didnt remove 'pats steaks' (a philly landmark - best cheesesteaks on earth) from the beginning, we cool :-D

Good to see this all done already. Shall be grabbing it soon.

This FanEdit is far better than the original. It is more serious and focused. Parts are excellently creepy. Yet two things stopped it from being a perfectly executed FanEdit.

There are many reasons why the original film and accordingly the fanedit, fails to convince. The premise is a good one but the script never plays to those strengths. It pop-corns what could have been an uncompromising vision of demons in modern society.

One other hugh failing, surprisingly, is the phoned-in performance by Denzel Washington. His portrayal of the detective Hobbes is too confident and controlled. Never is there a moment where we feel his sanity might fracture. His perspective of reality is completely altered by the knowledge that demons exist yet he is a man of action with no pause for reflection, doubt, confusion or profound fear. Human qualities in most of us. The death of his brother at the hands of Azazel hardly impacts on his resolve or purpose.

All of the cuts work well and the editing is seamless but I was thrown out of the film twice by some poor audio editing and one jump cut. The weird audio comes as Hobbes walks down some creaky old steps. The same sample of a footstep is used about 4 times and it is very obvious to my ears that this same sound repeats. Changing the pitch, volume or time stretching would have helped. Creaking ambience could have been taken from another part of the film and used, without having to repeat a short and loud sample of a foot on a stair. The jump cut comes when Hobbes is shot at by his friend Jonsey outside the cabin and then suddenly they are fighting each other on a car bonnet. These two issues are easily corrected but stop me giving this a 5 star rating.

The removal of the narration improves the film and adds some much needed depth. As does the cutting of the Azazel cat.

The cheesy final rant by Detective Jonesy as he searches for Hobbes inside the cabin is also a very wise cut. How many times do we need to hear an actor singing "Time Is On Our Side"? ....and John Goodman's acting during this silly scene is very suspect.

The ending works very well but the final song is not to my taste and so lessened the impact of this new and clever ending.

The DVD is well presented and easy to navigate.

thanks for the nice review, mollo.
I will see what i can do about those two things that bug you. There might be a version 2 soon. I still have all the files saved. Your input is much appreciated and taken seriously into account for an improved version.

there was a flaw in this edit with the final fight scene, when Hobbes and Jonesy get too quickly into action. 2 people mentioned that as cut that did not work too well for them. I will release a new version within the next days that will address this issue. Takes a bit of time though, because I need to recreate all 3 audios and the subtitles as well.
I am doing this because I want to deliver a fanedit as perfect as possible.
Stay tuned.

problem solved. I simply had to replace 1 sec and it worked like a charm. Now I am happy with it. Uploading now. New links will be available tomorrow.

boon23 said:
problem solved. I simply had to replace 1 sec and it worked like a charm. Now I am happy with it. Uploading now. New links will be available tomorrow.
Click to expand...

Fantastic boon. I really loved the edit (save that one spot) and I am really looking forward to see how you got around it. This is really a great fanedit.

New links are up.

Thanks guys, looking forward to this one.

RS on linktalk (this is not a link)

The DVD release of Azazel is a perfect template of what a Fanedit should be. It takes a flawed film and makes it better. much better.

The film/edit itself is flawless and in my opinion improves upon the original elevating it from mediocre thriller to a really good mystery ala Se7en.

Boons skill is really amazing and it is on full display here. It does not show that this was a fanedited film, and could easily pass for a full fledged studio release. The inclusion of 3 featurettes really shows his care for the edit and lets the viewer see what was removed and why. My favorite extra to find on any fanedit is a commentary by the editor explaining the choices he/she made and it lets the viewer look at things from a different viewpoint as well as learn how or why something was done. I hope to see more of these in the future

The beautiful DVD menu is by far the best I have seen on any fanedit to date and really hit this one out of the park. It is easy to see why this was chosen as a fanedit of the month. well done!

Audio: 5/5 - Seamless. The removal of the narration and subsequent re-scoring of the scenes blew me away. This is done so well I didnt even know they were missing.

Entertainment: 5/5 - I enjoyed Azazel much more than I did the original "fallen" this isnt just an alternate version, this is a better version.