Over a year ago, I started the idea of making the X-Files mythology episodes into feature length films to support FIGHT THE FUTURE (project idea here).  Well, after a year of work on this, the first movie is done.  This is about the start of the X-Files.  I made this into widescreen to give it more of a theatrical feel, so I've individually reframed almost every shot to accomplish this.  5 episodes were included this.  I've also included a variety of external audio sources, including additional score, music, and sound effects.  More edits are likely to follow in the future. 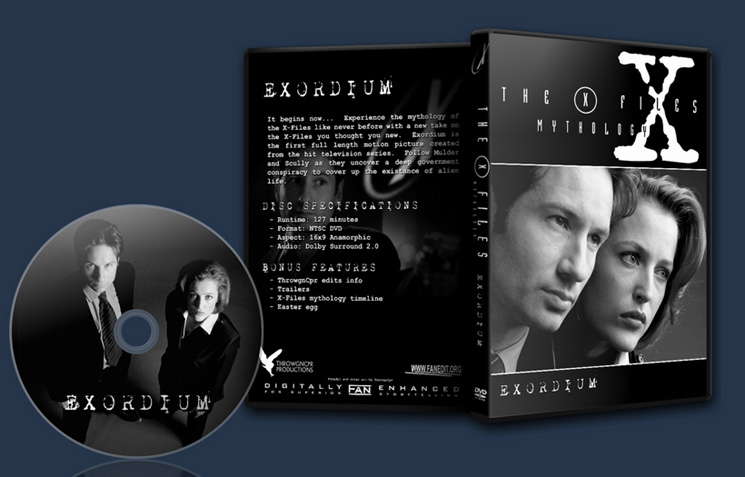 Cuts removed/added/extended :
* added THX style FAN logo intro
* added Fox Fanfare intro
* added intro credits
* reframed from 4:3 fullscreen to 1.85:1 (16:9) widescreen
* cut Scully walking into FBI headquarters
* cut airplane scene
* cut some dialogue in car referencing medical examiner as possible suspect
* cut "I'm wired" line by Mulder
* removed some commercial fades
* cut confrontation at cemetery
* cut discussion of "father knowing about sons involvement in abductions" with Tracy at diner
* cut father/son reunion
* added Smoking Man in warehouse over dialogue from Mulder to phone conversation to heighten tension and aid transition
* cut credits to pilot
* cut theme intro to 'Deep Throat' episode
* integrated intro to 'Fallen Angel' before Mulder & Scully pnone call and intro of 'Deep Throat'
* removed reference to crash happening in Wisconsin
* some panning and reframing to Mulder meeting Scully in bar - to remove episode credits
* lots of cropping/panning/editing to Mulder & Scully case discussion in bar - to remove episode credits
* cut crazy fly-fisherman
* added some nature sound effects & score over some cuts during Scully talking outside to smooth audio transition
* cut waitresses line "Quiet like a hummingbird" - This makes no sense.  Hummingbirds are VERY vocal.
* cut kids from film.  While they were good characters, they really served no purpose for this edit
* completely rebuilt audio with score and sound effects for night helocopter chase to accomodate loss of kids
* removed more obnoxious commercial fades
* cut reference to kids in hotel conversation
* cut kids leading mulder through fence.  Mulder is not guided.  He explores on his own.
* did I mention about removing commercial fades???
* had to cut some dialogue of Scully holding agent at gunpoint to remove kids from scene
* reworked end of Deep Throat (meeting between Mulder & Deep Throat at track) a bit
* trimmed some of Mulder's dialogue from final meeting with Deep Throat (from Deep Throat episode).
* cut credits to"Deep Throat"
* cut intro credits to"Erlenmeyer Flask"
* lots of reframing to remove credits
* cut all local police scenes, and the search for the missing suspect
* cut actual murder scene of Dr. Berube
* arrgggggg, begone ye worthless commercial fades
* removed corny dialogue between Scully & Mulder about trust and faith.
* removed reference to Deep Throat meeting Scully before
* cut final phone call between Mulder & Scully.  There is no talk now of shutting down the X-Files.  It would have been way too soon to all happen (opening & closing) in 1 movie.
* removed end credits to Erlenmeyer Flask
* custom end credits
* many many more little cuts that aren't listed.  I probably forgot a lot

Time needed for the edition: About 1 year off and on

persons involved: 1 me (plus the support of many friends).  Special thanks to boon23 for all his help with this project, and zorzalita, AvP, and everyone else who showed interest & support.

A very cool idea... will definitely check this out!

Cool. Looking forward to seeing this. Will you be upping this as a torrent too?

It seems only like yesterday that Thrown and I discussed his XFILES project for the now defunct podcast show. I am very happy to see it finally arrive.
So how many movies do you envision? At a year per movie, you better not stop now.
get that RS happening pronto mi amigo. Can't wait.

yes, KBM, its amazing how fast a year can fly by. I can't believe its been that long since we chatted. We need a reunion chat

I'm not sure how many edits I envision, but its much less than I originally planned. I realized that I didn't need to include all the mythology footage to tell the story. What I have presented here is season 1 - start to finish. Sure, it doesn't include all the X-Files happenings, but if you want that, you can watch the season episodes. With this edit I tried to tell the story of season one... the big picture. Mulder, Scully, the conspiracy, and the opening of the doors by Deep Throat. I hope I did that. You all will be the judge. This was like a baby to me. I could have worked on this edit for a long long time I think. But now I think its ready for some eyes.

So, I envision about an edit or so per season (obviously there is much more material toward the close of the series), and I already have an idea for the next edit. Its a bit of a jump in time (season 2-3) but I think it will be good. Things were much more linear, and this should allow me some experimentation. Season one was all over the place. We not only get an intro to Fox & Dana, but everything odd that exists. The series keyed in a bit after that, and I hope this will only improve the edits. I should have this out hopefully next spring There are some projects I must get to first

So please, enjoy, and let me know what you think!!! It will only improve future installments ...as for a torrent. I can guarantee that I will not be torrenting this. I cannot do torrents at the present. That said, hopefully a kind soul will help those torrent junkies out with one. Also, I welcome anyone willing to start a torrent, and am willing to send them a disc to start the party.

Looks good, can't wait to check it out!

This is great stuff ThrowgnCpr. I respect the fact you didn't just throw all the mythology stuff in just for the sake of it & prefered to focus on telling a linear story. I can't say I was a massive X-Files fan, but I did love the show when it was on & I have always wondered what it'd be like to watch just the mythology episodes. But, what you're working on here is even better than what I could imagine, nice one.
S

umm, no, its fanedit.org Others have confirmed this.

it is fanedit.org
S

Oh, there it goes. I don't like rarzilla. It did ask me for the password twice but yes it indeed is fanedit.org. Thanks Throw and AvP. Sorry for the confusion. I am really looking forward to watching this one. :smile:

no problem stomachworm. glad you got it working
S

Yes and I'm glad you did the cover b&w so that I can print it at work. :smile: I hope it's good stuff.

stomachworm said:
Yes and I'm glad you did the cover b&w so that I can print it at work. :smile: I hope it's good stuff.
Click to expand...

lol, work printers rule!! ...and yes, i hope you think its good stuff too

I'm glad the Disc Art is B&W as it'll work with my Lightscribe burner!!!

ThrowgnCpr, you really have thought of everything haven't you!!! :-D

Molasar has offered to start a PIF chain. Please contact him if you are interested. And also, Molasar, let me know if this gets going.
S

Bad news Throw... typo. "...a new take on the X-Files you thought you new. Should be knew.

aha, yes on the cover art. damn, oh well. I'll probably reupload a fixed version to the website and gallery. If thats the only problem you find, I will be quite happy