War Of The Worlds: The Extinctive Cut v.2 by CBB

WAR OF THE WORLDS - THE EXTINCTIVE CUT
V.2 by CBB

synopsis: This is WAR OF THE WORLDS for the 21st century, re-edited for an improved watching exeriences for those who were not entirely happy with the original. This version comes with a choice of 2 endings (one being drastically different), no antique voice-overs, faster pacing, plot corrections, no Harlan Ogilvy and no Robbie resurrection.

tagline: "This is not a war. It's an extermination."

List of changes:
- recolored movie from yellowish to blueish
- removed intro
- removed Ray explaining what his problem is
- removed Ray speeding
- removed digital camcorder filming, while it should be dysfunctional through the EMP
- moved "Are we still alive"
- removed reporter asking Ray if he was on the plane
- removed burning train
- moved "Europe got the worst of it"
- added exterior house view while the battle still takes place
- removed Harlan Ogilvie entirely from the movie
- added exterior empty night shot from the house
- moved, zoomed, rotoscoped many scenes in the house to make Harlan disappear

Fanedit details:
The audience gets a choice for 2 endings in the beginnings (done through seamless branching):
The extinctive cut ending is the drastically new ending for the movie, in which we fight back.
The purist ending contains the micro organisms ending, but no Robbie Resurrection or final voice over.

in both versions there is no Harlan Ogilvy and lots of other minor changes to correct the plot and improve the pacing. 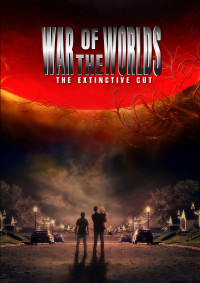 cover, disc and inlay art in DVD-Rom part
an html site with links to all CBB fanedits on fanedit.org in DVD-ROM part.

Faneditor intention and how it was achieved:
I already created a fanedit of WOTW in early 2006, but was never happy with the overall quality. Still my motivation remained, because I think the idea for a new ending and to remove Tim Robbins is for the greater good of this movie that has so much potential, yet falls so flat in the second half.
To remove Tim Robbins from the shack, I cut around him or rotoscoped him out of the movie, most of the time by including more shadows (which works well, because it's a dark cellar). This was an incredible amount of work. Some of it was done by masking areas, some by hand painting images. Some scenes were restructured to have a flow as my first version of this was very jumpy. This one isn't. It's not 100% perfect, but a good 95% IMO.

Yes, it's true to the book to have micro organisms defeat the Alien invaders, but in the 2000s this is a tough one to believe. An advanced species will be prepared for such a thing. Because it seems they have been doing that for millions of years on loads of different planets.
For the new ending I used scenes from "Deep Impact", "Terminator 2", "Terminator 3", recolored and resized them to fit to my WOTW look. I composed a new sequence from them and created entirely new audio, using an incredible load of sound effects and score for that to make it sound appropriate.

In the original intro it says: "...regarded our planet with envious eyes. And slowly and surely drew their plans against us." Well, I never thought that could be true. the Aliens are raiders. They go from planet to planet and harvest all the resources. Much like the Aliens in "Independence Day". We were just next on the list. Yes, they came here a long time ago to check it out, but they did not wait. The voice overs feel outdated IMO.
That's why I removed them (besides Morgan Freeman sounding rather bored). For the purist finale it requires some thinking of the audience, since they never get a proper explanation what killed the Aliens (only visually shown), but I take it ym audience is clever enough to do the maths.

WOTW is deep on the characters and I love that about this movie. Especially the Ray Ferrier character (played by Tom Cruise) is set as a very interesting anti-hero. It's all totally over his head, yet he tries so hard to keep it all together and survive with his family. The development process he goes through is one of the most interesting things about the movie and such a nice and unusual approach for a science fiction / action movie.
For my edit I deleted some moments in the beginning that made it over the top clear what an asshole Ray Ferrier is and what a puny show off. That was not needed and did not add to his character.

There are still some not logical scenes, which I kept for entertainment: for example the blood sucking of the tripod, when later on this is all done INSIDE the tripods, or the Alien eye sneaking into the shack the 2nd time. But I got rid of some annoying scenes, like the camera filming when all other devices don't work because of the EMP or the journalist not escaping directly but asking Ray for a good story.

The fades in the shack, title cards in the "Extinctive Cut" ending and the change of perspective in that ending are still of course a bit odd, but the best possible approach I could find. I used early in the movie quite a lot of fades to introduce this technique and make it feel as part of the movie. For the "Extinctive Cut" ending I tried to include Ray as much as possible to let him be a part of that. It works kind of well, yet there is only so much you can do. The rockets start in a not Alien destroyed nature, the other people in the shelter entrance wear lighter clothes and are not dirty. Those who want to spot flaws will see them. Those who follow the plot and are IN the movie, will be vastly entertained. And this time I have an awesome president.

For the trailer I wanted something special: I wanted to create it on one piece of score. I searched long and hard and finally found something fitting: "The Omen - remake". Then I created the scenes to flow with the emotion of the score for a complete piece. It worked quite well, I think.

Time needed for the edition: 8 weeks of editing, both on sound and image. 1 week for the DVD menus and the extras.
persons involved: most of all me. President speech written by Mig81. Thanks Mollo for your participation.

Awesome. Will watch this one soon.

Finished watching this edit yesterday, wont give no spoilers, but would highly recommend this edit. Loved both versions
and the shack scene changes were amazing. Speilberg should give you a job Boon, the before and after shack scene
was absolutely incredible. 10/10 from me for video and audio. My wife watched it with me and she wasn't aware that it
was a fan edit that's how good the editing was.
J

Happy to see this finally make the light of day. The picture quality is much improved. Still, I think the studio should do a remaster/re-release of this movie, as even on the original disc I find the skin tones are very murky looking.

jamiemark said:
Happy to see this finally make the light of day. The picture quality is much improved. Still, I think the studio should do a remaster/re-release of this movie, as even on the original disc I find the skin tones are very murky looking.
Click to expand...

I recall watching the DVD9 and being very disappointed with the picture quality.

This has been my first encounter with Spielberg&#8217;s War of the Worlds (FE.org rules only stipulate one has to *own* the original DVD, not *watch* it), and I can&#8217;t begin to imagine the total and absolute horror that must dwell in the theatrical version, as despite Boon&#8217;s work being clearly excellent as usual, I had to force myself to keep watching it. Problem is, I didn&#8217;t give a rat&#8217;s ass about that badly written stock TV movie family, about Tom Cruise being totally unable to be even remotely believable as a working class Joe (that opening sequence of him operating machinery got me thinking of Jennifer Beals&#8217; steel worker at the beginning of Flashdance!) or about uncle Steven&#8217;s usual and tiresome parenthood obsession. I kept waiting for them to get vaporized or eaten or whatever by the aliens, and in a movie that depends entirely on the audience caring about the characters that&#8217;s not exactly a good thing. Of the elements from the original, only Dakota Fanning&#8217;s performance was worth it. That kid is amazing. Her dialogue is not.
This said, on a purely fanediting level, it was amazing! Boon delivers again. I don&#8217;t know how big Tim Robbins&#8217; role was in the original, since his part does not appear in the deleted scenes section, but one would never guess there was an extra character there. Boon went a long way to delete him from individual shots, and did so masterfully. Be sure to check out the comparative featurette on the subject! We&#8217;re also presented with two different endings to choose from, and I must say I vastly preferred the totally original and much darker Exctinctive one, warts and all. Kudos as well to the special guest President of the USA, great voice and delivery. Yet I, once again, thought that some extra bits should have been excised, particularly that baseball sequence in the first act. Enough with the fatherhood thing, Steven! It&#8217;s not meaningful as character development, we&#8217;ll get plenty of the same estrangement clichÃÂ© later from the son, and just slows things down. Not a fan of the peanut butter sequence either, at least half of it should have gone.
Overall I&#8217;m giving this a 7/10. Not Boon&#8217;s fault at all, it&#8217;s just the movie is not for me. I greatly *admired* this fanedit, I wish I could say I *enjoyed* it as well.

You're very welcome! Always a pleasure to watch your edits, even when a turd stays a turd.

BTW, where the heck is the DVD easter egg? I've looked for it left and right, yet I'm totally clueless... (PM if you don't want to spoil it).

hehe, I had to look it up myself
It is actually right where one would assume an extra feature to be ;-)
(I already thought I had used the "watch the movie first and THEN you can access the easter egg", but that was on a different edit.
This is a cute one. The name of it is "Dead Set".

Found it. Nice! And having a look at that Basil Exposition made me appreciate your edit even more...
O

Have downloaded this fan edit but can't unzip the archive.
It's asking for a password, and I have no idea what it is.
Can anybody please help ?
Dying to watch this.
Thanks.

oooOOOH Yeaaaaah said:
Have downloaded this fan edit but can't unzip the archive.
It's asking for a password, and I have no idea what it is.
Can anybody please help ?
Dying to watch this.
Thanks.
Click to expand...