Your intention for this fanedit:
To follow D-Fens during his really, really bad day.

Additional Comment:
The whole "I'm-a-cop-and-today-is-the-last-day-before-I-retire-and-I-really-should-just-sit-behind-a-desk-like-everyone-tells-me-to-but-there's-just-this-one-case-that-only-I-can-crack-so-I'm-going-to-investigate-it-and-in-the-process-rediscover-my-love-for-police work-and-maybe-I-won't-retire-after-all" cliche is really over done. Morgan Freeman in Se7en is the one notable exception.

There really wasn't anything wrong with Robert Duvall's or Rachel Ticotin's performances, but the whole police side of the story is unnecessary and, quite frankly, uninteresting. None of it really serves to further the plot except for the one scene with D-Fens' mother where we get a little more background on him. The audience doesn't need to see how the police catch up with D-Fens, just that they do.


A SL NTSC stereo DVD is available via RS.

Time needed for the edition: about one week 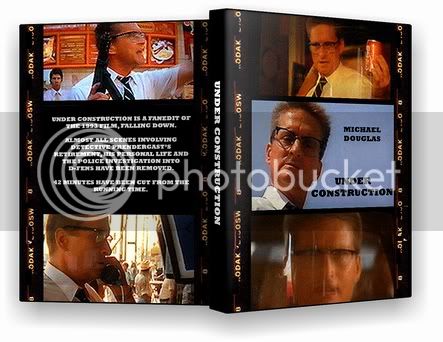 This sounds like an interesting edit.
I'm not too sure about the title though. I thought this was about a fanedit that's in the works. heh.
I probably would have suggested "A Really, Really Bad Day".

Anyway, I'm thinking this is worth checking out.
I don't think that I've seen any of your edits yet.

zeppelinrox said:
This sounds like an interesting edit.
I'm not too sure about the title though. I thought this was about a fanedit that's in the works. heh.
I probably would have suggested "A Really, Really Bad Day".
Click to expand...

lol I thought it was a page under construction, when I looked. I agree that the edit sounds good. I don't suppose the title matters much, but it was a little confusing at first. Having seen and enjoyed two other Adabisi edits, I am sure this one will be one to watch.

I have it now on my PC. Will watch it next week for sure.

Heh, sorry about the confusion. It's not just a randomly selected title. I think it's pretty appropriate. If you're really familiar with Falling Down, you'll get it. If not, you'll understand it when you watch the edit.

Nice! i really loved the original so an edit focussing on just the bad day part should be, as Capt. Kahjiit said, interesting
J

looking forward to this.

being a fan of the original film, I like the title - very well chosen

About the title... I take what I said back.. it's PERFECT... so perfect that I LOLed while watching this last night...

Here is my review/comment from the main site.

I loved this edit.
I've only seen this once before, I believe at the theatre, and forgot how much I love this movie.

It reminds me of Robocop's social commentary and Network's "I'm mad as hell and not gonna take it anymore" theme. Hell, the nazi in the basement reminded me of Pulp Fiction, which was released after this movie, if memory serves me correctly.

Editing, audio and video - it's all top notch.

The police investigation is not missed at all and makes for a great viewing experience.

The only nitpick is the presentation. No chapter menues - Just a static main menu with a Play button.

Thanks for this. This is what fanediting is all about!

Cool, glad you liked it. Thanks for taking the time to watch and review.
J

great edit! very well executed. draws a lot of focus to the issues presented as commentary and the tension bill feels is much more palpable.

Glad you liked it, joe. Thanks for taking the time to watch/review it and The Game Show King.

Zeppelinrox, thanks for putting that up.

Boon, thanks for taking the time to watch and review the edit. I had a few comments regarding your review.


Boon23 said:
The removal of the Prendergast scenes made this for me an even stranger movie than it was before. Although his scenes were kind of dragging, I consider them the heart and soul of an otherwise very flawed movie,
Click to expand...

That's an odd view of this movie. The film is clearly about D-Fens and his misguided frustrations regarding his loss of the American Dream. For me, Prendergast's retirement and his troubles with his wife are an unnecessary subplot, and certainly not the "heart and soul" of the movie. But to each his own.


Boon23 said:
Prendergast appears in the beginning, he appears again out of nowhere at the end
Click to expand...

If he had only appeared at the end, I could understand how it would be "out of nowhere". By having him at both ends of the movie, the audience recognizes him as the cop from the beginning when we get to the end of the movie.


Boon23 said:
and mentions that he knows that D-Fens had been working for a rocket building industry.
Click to expand...

Technically, D-Fens mentions that ("Did you know I build missiles?"), but Prendergast is not surprised by that fact.


Boon23 said:
So I clearly got the impression that he was on the case.
Click to expand...

Great, that was the point.


Boon23 said:
His entire speech in the end makes it appear as if he was not there by accident.
Click to expand...


Boon23 said:
So I think his scenes on the case were needed or were missing from the fanedit.
Click to expand...

Huh? You just said you got all you needed to know about him from his speech at the end. Why then have all the uninteresting redundancy of him working on the case? I think you need to give the audience a little more credit. They don't need to be babied along the way like that. When he shows up at the end, the audience knows he's a cop because of his appearance at the beginning. Even if they don't make the connection, he flashes his badge. And, like you said, from his speech we know he was working on the case the whole time.


Boon23 said:
The D-Fens scene collection, where he terrorizes people, fights for what he calls freedom, kills "bad" guys are partially so over-the-top that it could be a satire, yet it isn't one, or if it is, it is not executed like one, because the movie does have a serious tone for the most of it.
Click to expand...

Well, it's certainly not a satire, at least not in the sense that A Modest Proposal is a satire. It's about the breakdown of American society in the early 1990s that is mirrored in the mental breakdown of the central character.


Boon23 said:
This could have been a lot better I think, if it was better constructed
Click to expand...

Clearly you didn't enjoy it, and that's fine - it's certainly not for everyone. But I find your reasoning very strange.

yeah, well, you probably did not get the part where I sounded my confusion.
The Prendergast scene in the end was all not satisfying for me. I had watched the original movie about 10 years ago, so I know what I needed to know, but my judgment comes from this very watching experience of your fanedit that was unsatisfying for me. And I see as the major flaw the missing of the Prendergast scenes throughout the movie.
If it works for you this way: good. I was hoping for something else: a continuing and logical plot with a logical solution and not a surprise cop at the end that was all the time on the case, but the audience did just not know about it (excuse me, but that's bad storytelling and there is no movie that I recall that uses a similar style) and toned down D-Fens scenes to make it less artificial and ridiculous, what he does and how people react on him (the waitress in whammy burger, the nazi in the army clothes shop, the old golf player, etc.).

boon23 said:
I was hoping for something else: a continuing and logical plot with a logical solution
Click to expand...

The plot is pretty logical and straightforward. Man vs. society and his prejudices. He creates havoc and is subdued by a cop - the person who's job it is to subdue havoc.

boon23 said:
and not a surprise cop at the end that was all the time on the case, but the audience did just not know about it (excuse me, but that's bad storytelling and there is no movie that I recall that uses a similar style)
Click to expand...

The 6th Sense, the Village, Se7en, Usual Suspects, Planet of the Apes, Empire Strikes Back, Unbreakable, Shawahank Redemption, Memento, Following, The Game.... I could go on.

boon23 said:
toned down D-Fens scenes to make it less artificial and ridiculous, what he does and how people react on him (the waitress in whammy burger, the nazi in the army clothes shop, the old golf player, etc.).
Click to expand...

I don't know why you were expecting that. The edit list is right in the first post.

none of the movies you mention has a surprise person pop up at the end that saves the day and of course they don't.
As for what I was hoping for: when watching a movie or fanedit (no difference for me), I see, what I would have preferred instead of what I got. It's a faneditor thing I suppose.
But like I said in the beginning: if you are happy with your fanedit: good.

boon23 said:
none of the movies you mention has a surprise person pop up at the end that saves the day and of course they don't.
Click to expand...

Right, but that's not what you said. You said there is no movie that uses similar style. And there are many, many movies that use similar style.


boon23 said:
As for what I was hoping for: when watching a movie or fanedit (no difference for me), I see, what I would have preferred instead of what I got.
Click to expand...

I don't know what I want until I see it. So your fanedit could have worked very well with what was cut or how it was arranged. Unfortunately it did not for me. I am not watching fanedits to criticize them per se and that's not what I am doing. I watch them as movies and want to be entertained.
And once again I disagree on a similar style. I am not talking about movies with surprise endings, but about storytelling that is not at all used in regular movies - because I think it does not work (as in not doing what it is supposed to do). If the up-popping Prendergast works for others and they don't miss anything or it does not put a huge question mark in their heads: good. I see him suddenly there as if he had been all the time and wonder, why it was not shown to me, because I don't buy it that way.
You could have mentioned the movie TOP SECRET in which Val thanks the scarecrow in the end. THAT is similar. ;-)
The original flawed as I think it was, was the more consistent and better movie for me.