In December 1993, the season finale of Teenage Mutant Ninja Turtles Seventh season ‘Shredder Triumphant’ aired.
It would prove to be the final episode to feature the traditional Fred Wolf Animation Look and Feel that had become the benchmarks of the franchise.
In 1994, the ‘Red Sky’ era would commence, bringing with it a new tone and scope to the show, giving the Turtles more of a harder-edged attitude.
The days of the happy go lucky Fred Wolf era were to take a permanent back seat.

Several decades later, we wind the clock back, before the skies ever turned red, and we ask the question, ‘did they ever have to at all?’
What if the eighth season of the Fred Wolf cartoon had retained the same look, feel, and charm of the first seven seasons?

Picking up exactly where ‘Shredder Triumphant’ left off, Krang, Shredder, Rocksteady and Bebop on the run. Krang still has his android body and all of its might. Shredder has his cunning, and Bebop and Rocksteady have their strength.

And as for the Turtles? They still have their wits, their quips, and their passion for Pizza.

This special project hopes to cover at least six episodes and to be experianced in a variety of different mediums, from comic strips, to voice acting, to storyboarding, to potential animation! No profit shall be made from this venture, this is simply a fun community project for developers and performers from all walks of life who have a passion for TMNT like no other. It's to get YOU noticed, so that the next generation of TMNT can be forged.

We are in need of auditions for the roles of Shreeka, April, Irma, and Michelangelo, if anyone here is good at voice acting, feel free to drop in and try out. More roles will be added once lines are finalized.

(and yes, ignore the bit that says 'paid casting call', that was a blunder on my part when I was setting up the project)

Shredder, Krang, Donatello, and April have been cast, hopefully I'll decide on which Mikey to cast by the end of the week

This looks so exciting! If you need any bit part voice acting (European Spanish accent would prevent me from voicing any major parts) let me know!

Dwight Fry said:
This looks so exciting! If you need any bit part voice acting (European Spanish accent would prevent me from voicing any major parts) let me know!
Click to expand...

Thanks, I'll try to come up with something for that. Maybe a security guard with a couple of reactionary lines to what's going on.

I'll be looking to inquire about commissioning storyboard artists for this sometime after the summer.

New roles will be created maybe tonight or Sunday. 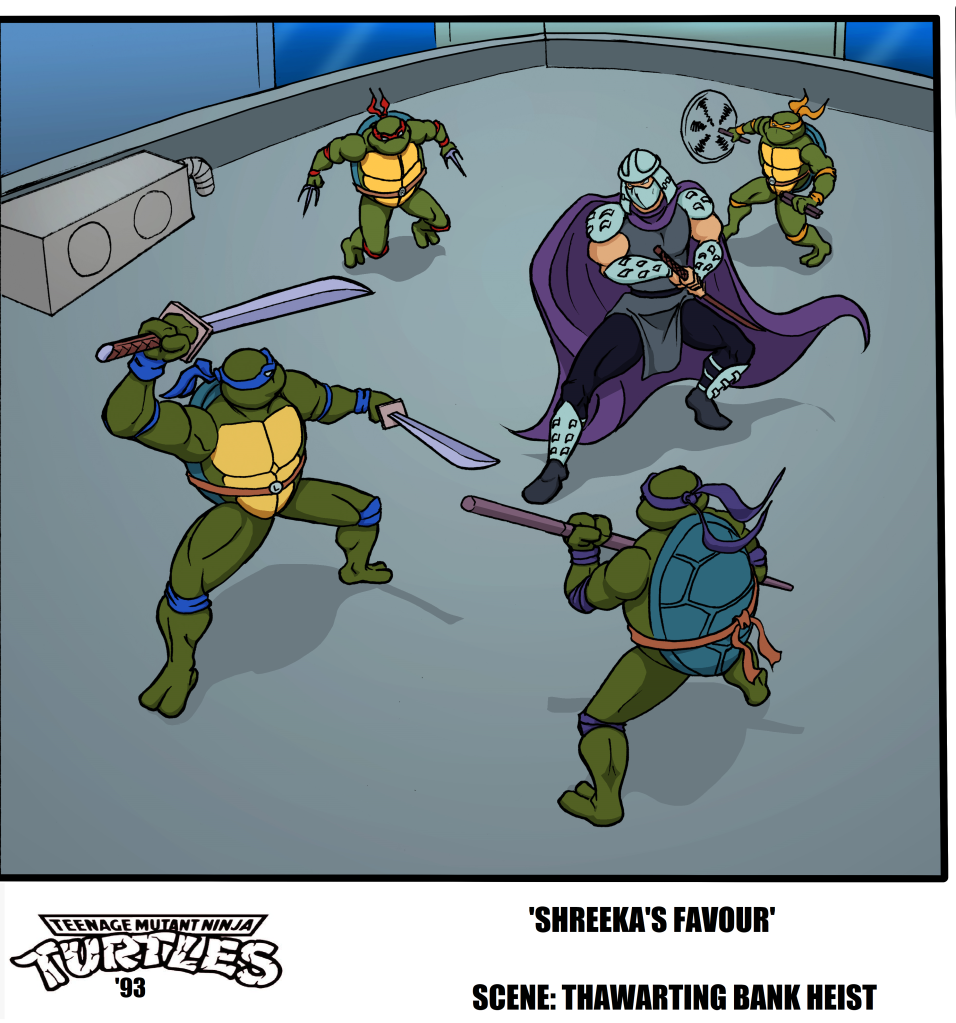 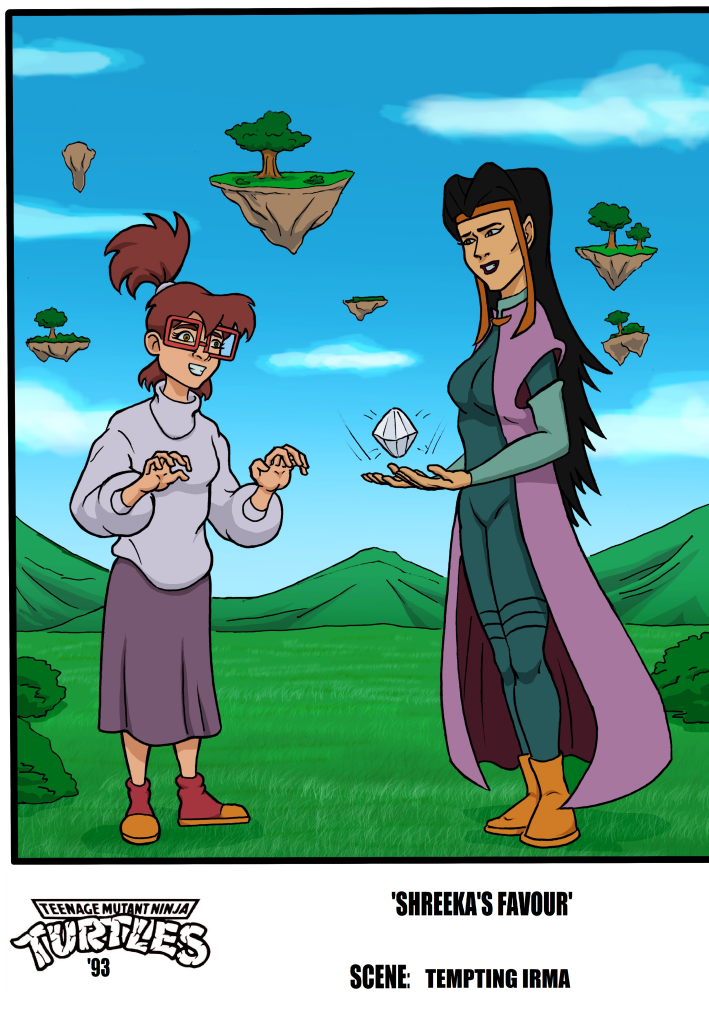 Also pushed the deadline up to August 1st. I don't think at the rate we're going I will have a Shreeka cast, so I'm just going to have to cut my losses and work out something with any voice actresses I've got on board for either April or Irma.
Last edited: Jul 13, 2022

Some of these voices are good with bad mics or bad recording. Two tips.

Recommend in those cases that you ask them to not point the mic directly where the air comes out their mouth, but instead slightly to the side (similar to the position it would be on a headset). This will help mitigate air pops on hard consonant sounds like P and T and K. Not the same as buying new mics for everyone which would be super impractical, but it will help a lot.

Also (alternative to sound proofing a vocal booth) opening the door or window to the recording room will help eliminate room reverb/echo. Many get self conscious when recording and close up all the doors and then later while listening they'll wonder why sound bounces around so harshly, it has nowhere to go.

Also, let me know if you want help processing/cleaning up audio once you have a bunch recorded.
Last edited: Jul 14, 2022

addiesin said:
Also, let me know if you want help processing/cleaning up audio once you have a bunch recorded.
Click to expand...

Thanks for the tips. If you'd like, I can recommend all pf what you posted in the chief description over on the casting call page as a main directive. Might do that for all future projects actually so I have more concise output more readily.

If you want to try processing the audio without help, the steps I would do would be the following, in Audacity (and forgive me if this is unwanted advice. I just figure you want to do audio stuff and want to increase the overall quality of the end product, so this might help). Ten loose steps.


Before you even bother with playing it/listening to it...

1. Fade in the beginning, fade out the end, even if there's very little to no sound. Speakers hate pops and this helps keep everything clean.

2. Limiter. Take volume of any peaking audio down quickly with Effect > Limiter. Don't be too harsh on it, some audio will naturally be louder and some quieter, but if there is peaking you want to cut that down to near the loudest. Don't bring it down all the way to the loudest point or you risk cutting non-peaking audio too.

Now you can play the audio and you have no chance of blowing your speakers even if the audio is not ideal.

3. Normalize. This just takes the loudest point of audio in the track and makes that 0dB (the loudest without peaking) or whatever volume you set, and raises or lowers the volume of the entire track in unison. It does not change dynamic range.

4. Noise reduction. Duplicate your original track and mute it, the muted one is now a backup. Rename it if you want. Leave the backup alone and choose a method to reduce noise:

Method 1a: Audacity > Effect > Noise Reduction: Before you click on it, Highlight a few seconds of silence with no voice, THEN go to Noise Reduction and use your selection as the Noise Profile. Next, highlight a small portion of the audio with the voice, THEN go to Noise Reduction again (this time to actually use it) and change the settings to cut away the noise but not crush the voice frequencies. Even with a good Noise Profile set, it takes a manual touch and it's easy to do too much. When it sounds "right" on the portion you have selected, apply the effect to the portion (this saves the Effect's settings you just figured out so you don't have to remember them). Now UNDO so the small portion doesn't have Noise Reduction applied. Lastly, select the WHOLE audio clip and go to Noise Reduction one more time, and it should have your last used settings saved in it. Now apply the effect to the whole clip. This takes a while (which is why we toy with settings on a small portion) and is destructive (which is why we keep the backup).

Method 1b: Audacity > Effect > Vocal Isolation. The steps are the same as 1a, it functions almost the same way as noise reduction.

Method 2: AI: Export the whole clip as WAV as it is now. Run the whole clip through an AI software that separates vocals from music instruments and outputs to WAV. Any noise will be placed in the instrument track, but this is destructive.

You can use either method, also you can do both and mix the output of the two, AND you can mix the original/backup at a lower volume to retain some room noise if you desire, or if it brings back some life or some lost frequencies. If you mix tracks that have the same audio base, make sure you lower all their volumes to not peak when played together, and then when you're happy with the volume, bounce them (mix them down) into one track.

6. Equalizer. Boost and cut different frequencies to increase the fidelity of the voice recording or match different microphones as closely as possible. Similar to in your car stereo the knobs for bass, mid, and treble. But instead of only having 3 bands, you have more control with either a Graphic Equalizer or Parametric Equalizer. This is subjective, use good headphones and compare effect on with off a lot. The settings you use will be slightly different for every voice/mic/recording setup. But if you settle on something that you like for one recording from one voice actor and can reasonably assume they'll use the same setup each time they record, you can save your preset per actor and reuse it each time that particular person sends you a clip.

7. Compression. This effect allows you to make the quiet and loud parts closer in volume to keep perceived volume consistent. You should look up what the settings are because it's not super self explanatory. Again you don't want to be too heavy handed or the dynamic range is completely crushed, but with voice acting you probably can be heavier on compression than with other types of audio like singing.

9. Repeat on the other tracks.

10. After each voice clip is processed they should be able to be edited together seamlessly. At which point it's important to match up all the volumes to the quietest track, lowering whichever ones are too loud. Ultimately you want every word to be clear and every character to fit together, before you add music and atmosphere effects and whatnot.
I'm no expert, these aren't hard rules to follow. The order of the bigger steps are not entirely important. Just normalize after everything that changes overall volume or volume dynamics, and make sure to do noise reduction BEFORE compression or else the noise will be louder than ever.

Btw are you getting help animating this or is it going to be audio exclusively?
Last edited: Jul 14, 2022

addiesin said:
Btw are you getting help animating this or is it going to be audio exclusively?
Click to expand...

Animation's a long way off, no way is anyone doing it for free, but it's something I'd like to get done in a couple of years down the line, best I can afford right now is storyboarding, covers, and illustrations, but the audio ought to still help bring it to life a little.

At the moment, it'll probably best serve me as an audiobook of some kind.

I have my Shredder lines in.

An excerpt from "Shreeka's Favour"