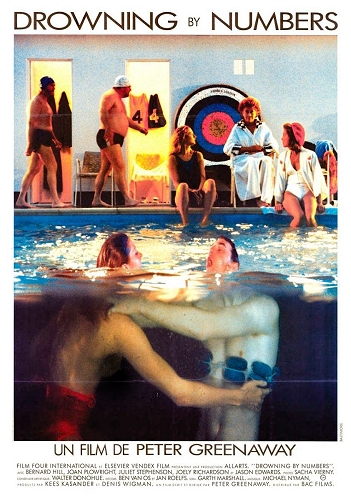 I don't think a viewer today could watch Peter Greenaway's 'Drowning by Numbers' and not think "Hey, isn't this a Wes Anderson film?!" a decade early. There is less clean artifice, less precise visual symmetry and much more chaos and but the inexplicably eccentric characters, sideways voice-over, attention to on-screen typography, bizarre game playing activities and an insular community operating by it's own rules, are all there. Even if you weren't interested in the darkly comic and surreal murderous exploits of the characters, Greenaway's choice to place the numbers 1 to 100 throughout the film (mostly in order) will keep you engaged with the screen, in an obsessive type of way. Michael Nyman's score is glorious as always. 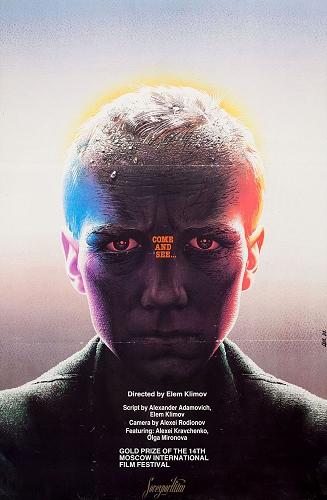 'Come and See' is slow to get going, so it didn't exhibit the power it's often reputed to have, until the second half. However, when it does get there, it's a startling and shocking experience. It's testament to Director Elem Klimov's creative ingenuity and skill as a visual artist, that he's able to craft a film that looks like an expensive art-house epic, on what is only occasionally revealed to be a shoe-string Soviet budget. It's the shots where the actors stare out of the screen at you which stick most in the mind. Nazi atrocities in Poland and other places are well documented on film (in dramas and documentaries) but I confess I didn't know much about the real-life genocidal massacres in Belorussia, on which 'Come and See' is closely based. 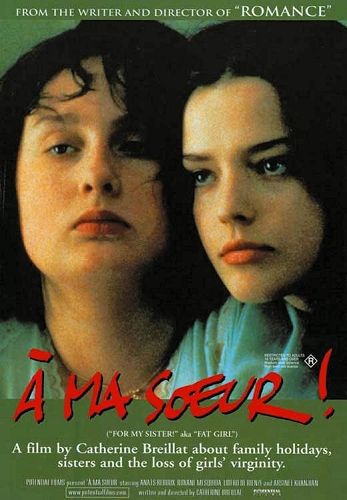 Fat Girl aka For My Sister! aka A ma Soeur! aka Story of a Whale (2001)
Director: Catherine Breillat
Country: France
Length: 86 minutes
Type: Drama

Mostly a well acted drama about two French teenage sisters dealing with their coming-of-age on a family holiday. It captures that thing between similarly aged brothers/sisters where you can violently argue with them one minute, then be deeply caring for them the next. The sexuality is unusually unflinching and uncomfortable. I'm not sure about the shock ending, as although it did have some small thematic resonance with what precedes it, it still narratively comes out of nowhere.


^ This is about the only non-NSFW clip I could find. 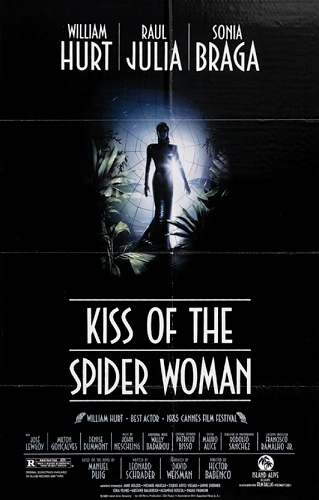 From the title, I'm not sure exactly what I thought this would be, a Neo Noir perhaps? I wasn't expecting a one-set, two hander, character study and political prison drama about an evolving relationship, in extremis, between William Hurt's Molina, an apolitical effeminate gay man and Raul Julia's Valentin, a grim left-wing Brazilian political prisoner who is being regularly tortured. They talk about their lives before prison and generally wind each other up but the title comes from a half-remembered "romantic" movie which Molina recounts the plot of to Valentin. The much more politically astute Valentin immediately recognises it, to his amusement, as an old Nazi propaganda melodrama. The really fascinating element is that we the audience know all along that Molina has agreed to betray and even poison Valentin in exchange for leniency, the question is then if Valentin will find out, or if Molina can go through with it. It's a beautiful and painful exploration of the brutality and kindness that humans can exhibit towards one another, by two amazing actors and an exultation of the power of defiance and romantic fantasy. This needs a Criterion remaster. 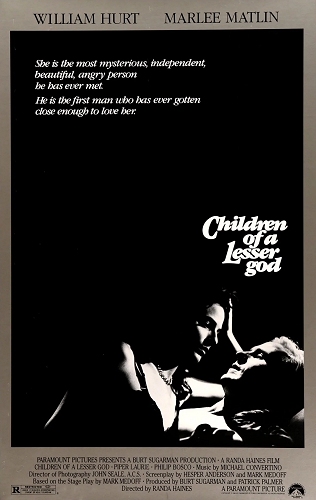 This seems to have "Oscar bait" written all over it but it's harder hitting and more interesting than it first appears. 'Children of a Lesser God' would be significantly improved if it had gone the subtitle route, like in the more recent 'CODA', rather than have William Hurt verbally translate every line of sign language because often the performances are so good, that the meaning was clear anyway. It shares a lot of DNA with 'CODA', as this also stars Marlee Matlin (in an Oscar winning role), also features elements of the "inspirational teacher" sub-genre and focuses on deaf/hearing communication in a similar New England fishing community.

It's much better with subtitles in 'CODA': 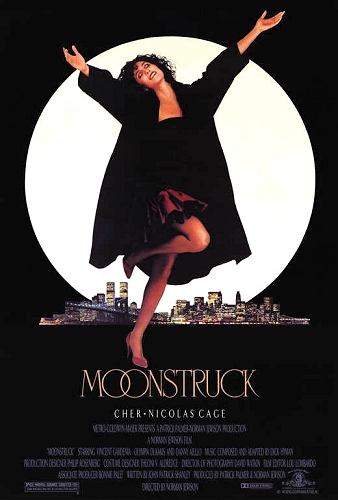 I was barely aware of what this film was, which is a shame because I've been missing out on a truly wonderful Italian-American romcom. The film opens and closes with the famous Dean Martin song, featuring the lyric "When the moon hits your eye, like a big pizza pie... that's amore" from which 'Moonstruck' takes it's title, theme and tone. Everything feels taken to heightened levels of romance, boiling emotion and hilarious comedy but it never feels like these characters aren't real people. The final scene for example, should be absurd farce but plays like one of the realest, most down to earth, most honest portraits of an imperfect but loving family I've seen in a Hollywood movie. One of my new favourite films. 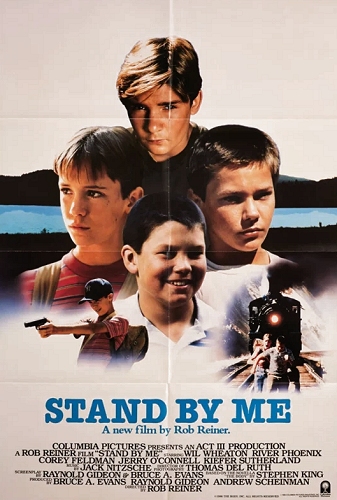 If it wasn't for Director Rob Reiner making obvious technical errors by shooting the vomit scene and train/bridge scene from the wrong angles, I'd call this a flawless movie. There is an element of it being a nostalgia piece from and for 1980s adults about them being kids in the '50s, with greasers and the wonderful jukebox soundtrack but it totally transcends those period references. The performances by the child actors are better than most adult actors. The cast, the time when it was made and the whole vibe feel very "Spielberg adjacent".

Hmm...what would be the right angles? It's been awhile, but I like how he played those, particularly the pie scene.

mnkykungfu said:
Hmm...what would be the right angles? It's been awhile, but I like how he played those, particularly the pie scene.
Click to expand...

It was a joking nitpick but the only reason why the classic vomit practical FX trick works is because you position the camera exactly right, so it looks like the liquid is coming out of the person's mouth, instead of a tube somewhere on the far side of the actor. I don't think Reiner got it right in a single shot. It's coming out of their chins, their noses and sometimes their closed mouths. But Reiner films it with such a consistent level of total incompetence, that I did wonder if it was a deliberate choice to make it more artificial, so as to make the scene less gross, but more silly and childlike (given the narrator) but then again he does also have the actors actually regurgitating liquids in other shots, so I doubt it. Still a very funny scene though.

For me it was a bit like watching a world champion athlete clear 10 hurdles flawlessly, then trip over their own shoelaces.

^Hmm...I'll have to rewatch that now that I have more filmmaking knowledge. I remember always thinking that the various reactions were hysterical and disgusting all at once, like trying not to vomit through your teeth. 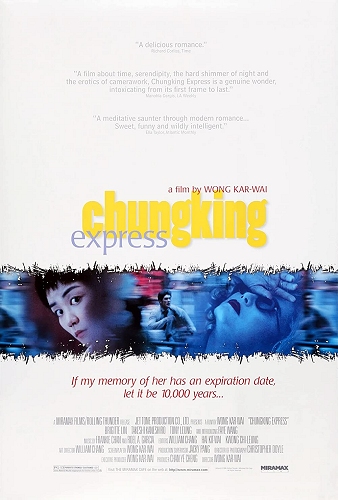 I'm not a big fan of anthology movies, so I was a bit disappointed to discover that the much celebrated 'Chungking Express' was two films but the two stories are strongly linked thematically and share locations and plot details, so it worked as well as this format can work. The couple of cute and whimsical but melancholy and thoughtful narratives concern Hong Kong cops brooding on a breakup, while encountering mysterious new women. I assume Brigitte Lin's striking look was a reference to Barbara Stanwyck's femme-fatale in 'Double Indemnity', so couldn't help but view the first story as an offbeat Noir. I marginally preferred the second story, mostly because of Tony Leung being amazing as usual. The performance by Piggy Chan Kam-Chuen as the owner of the titular fast-food bar is very entertaining.


Love the music in the film: