Was THUNDERBALL the first Connery Bond during which you fell asleep? You're not alone! Do you remember the beginning and end, but not the middle? Not your fault. It drags! Are you put off by the memory of water, water, ever more water? You're right! THUNDERBALL is a spectacular Bond movie that needs more focus, and less water.

Welcome to the fanedit THUNDERBALL: THE KISS KISS BANG BANG CUT. No more aquatic slumber, this is solid James Bond! Thunderball has some of Connery's best acting. In this fourth Bond adventure he really owns the role. It has SPECTRE, beautiful Bond girls, gorgeous sets, and memorable gadgets. See for yourself! Password: fanedit.org

Thunderball has imperfections, but only a few that really hurt the film.

Primarily the film drags. Early on (the plane theft), in the middle (huh, wha..., how much did I sleep through?), and at the end (can someone please hurry up the final battle?). One cause is that the director shows us too much and implies too little. Usually that's a good thing but Terence Young takes it too far. Many logical moments to cut away to the next scene are wasted by staying with a scene for too long.

Second is the convoluted story. Its sum is not greater than its parts, perhaps because Thunderball had five writers. After the overwhelming success of the preceding three Bond films, the makers were determined to top all that came before. When they said Thunderball has it all, they weren't kidding! They just overdid it, throwing in everything they could think of. When Bond tells Leiter "even the kitchen sink" it could refer to the film itself. More Bond girls than ever. Fancier gadgets than before (jetpack!). Great one-liners. The evil Bond girl, Ms Volpe, refers to previous Bond girls (meta language!). But rather than advancing the story, it feels like a James Bond medley.

Third is the rape. Bond blackmails a spa employee into having sex with him. Fleming wrote Bond as a rough, over-sexed alcoholic. Those flaws make him more interesting than a boy-scout caricature. I get that. I enjoy that. But Bond is also a role-model to the movie-going audience, he fights for what's right. While seducing Bond girls is exciting, raping one is an offensive crime. The writers compound their misstep by showing it was "okay" because she liked it so much she slept with Bond some more afterwards.
Fortunately, these problems can be addressed without sacrificing too much of the film.

A technical shortcoming of the blu-ray is the 5.1 audio mix: dialogue is too quiet relative to the music and sound effects. I've boosted the dialogue so as to not have to adjust the volume so often while watching the film. (A very gentle Compression of the Center channel in Audacity. I was initially hopeful that adding the inverted L+R channels to the Center channel would yield the best result but it caused glitches and only addressed the music not the sound effects).

I enjoyed @Ranger613 's Thunderball Warhead Edition, but not all changes worked for me. Some cuts were perfect improvements, others felt jumpy or more severe than needed. And one of my three major criticisms of the original, the rape, wasn't solved/improved at all. So here is my edit as an alternative to the theatrical and Warhead versions.

ACT I: THE CRIME
- Moved around spa scenes to show Pat having consensual sex with Bond before the steam-room scene, suggesting that she's willing in the steam room too. We retain this unpleasant side of Bond, without it being criminal. One scene is color corrected for consistency of Pat's uniform.
- Cut Mr Angelo alive in the room next to Count Lippe's, because that scene now takes place after his death. Also cut Bond asking Pat about Mr Angelo in the room next to Lippe.
- Split up the NATO story and spread (more) across the spa story. To improve the overall flow. Many small trims to stealing and hiding the plane.
- Cut sped-up shot of motercycle catching up to Lippe. The sped-up shots in the film are distracting, but mostly add more than they detract. This one didn't.

ACT II: THE CHASE
- Small trim to Q's scene. No more flare (it's use is cut).
- Trimmed Bond's night-time dive, so he is not discovered while he takes photos of the Disco Volante's hull.
- Cut 9 minutes of Largo and goons retrieving the bombs. Bond does not infiltrate in scuba gear, is not found out, does not get trapped in a cave. The underwater scenes are inferior to the final battle, we don't need to see Largo collecting his bombs (we know he has them somewhere, it doesn't really matter where), Bond's rescue from the cave is an inconsequential sub-plot. Largo's necessary line of exposition ("Miami") is dubbed into an earlier scene where Bond overhears Largo. Bond's necessary line (telling Leiter the target is Miami) is dubbed into a subsequent scene.
- Leiter's short scene "where's Bond?" is moved, from the now-cut Bond-in-a-cave, to Bond in bed with Ms Volpe.
- Extended Largo torturing Domino, to make him look nastier. Added a cut-away shot of the Disco Volante, with an extra scream from Domino, to suggest passage of time before the scientist walks in on them.

ACT III: THE BATTLE
Many small trims to the final under-water battle. For pacing and visual consistency (most murky shots are cut).
Removed shots in the boat fight of the unmanned steering-wheel looking out over a hyper-speed exterior.
Restored John Barry's original closing music.

Unusually, here's my Retained List. Initially I got stuck figuring out what to retain. Once I broke down the plot lines and scenes, I was pleasantly surprised how little needs to be trimmed to turn Thunderball into the solid Bond adventure it deserves to be (I cut 18 minutes). I hope that a future Thunderball editor will find this list useful ("Gee, I wonder why this was/wasn't cut").
- Distractingly poor green-screen of Connery flying the jetpack. Retained because the image so iconic it would be missed if cut.
- Retained sped-up shots of Bond's opening fight. It looks fake, but it's a consistent part of this 1965 Bond film. Later sped-up shots are either retained or cut (none are slowed-down). In the audio commentary, film editor Peter Hunt is outspokenly enthusiastic for the effect.
- The plot device that the Nato pilot is replaced by a plastic-surgery double. In Fleming's book the original pilot steals the plane so doesn't need to be replaced. Retained because it's needed for Bond to see the dead pilot at the spa, which in turn is needed for the memorable scene with M and Bond "If Bond says he saw ... that's enough for me to start inquiries."
- The steam room sex. See change list above. This was changed (from rape to implied consensual sex) rather than cut, because it's a memorable scene that shows us a credible dark side of Bond.
- The co-pilot switching seats with fake-Derval inside the plane. Retained because it shows the size of the plane's interior and the crew. And the English co-pilot taking a white, triangle-shaped sandwich is a fun little detail.
- The car chase of Bond being chased by Lippe who's being chased by Volpe. Poor green-screen, parts are obviously sped-up, Volpe implausibly ditches her moterbike in a lake (is she walking back to civilisation?). Retained because it shows us that Lippe dies, and that Volpe is a killer not just an assistant.
- Q presenting a radioactive pill, now no longer used, is retained because it's a fun Bond / Q interaction (making this Q gadget unusual for not getting used).
- Volpe barging in on Paula. I initially thought to cut Volpe from Paula's abduction, thinking the scene made Paula look stupid. Retained because it neither slows down the film, nor does it convolute the narrative.
- Most of the final underwater battle. Yes, Thunderball has waaay to many underwater scenes. But cutting the poorly lit, implausible, lengthy Bond-infiltrates-the-bomb-retrieval, gets rid of enough underwater time that we can retain most of the final battle (which for the most part is gorgeously lit and choreographed).

I'll make the subtitles next week, which also serves as a final check of the narrative flow and audio transitions. After that it's done.


Anyone who'd like to give feedback before it goes on IFDB, or wants to watch this over the holidays, PM me.

I started to edit the two commentary tracks for inclusion and decided against it. If you want to hear those I expect you want to hear them completely, not with 18 minutes missing. So for those you'll have to grab your original blu-ray. 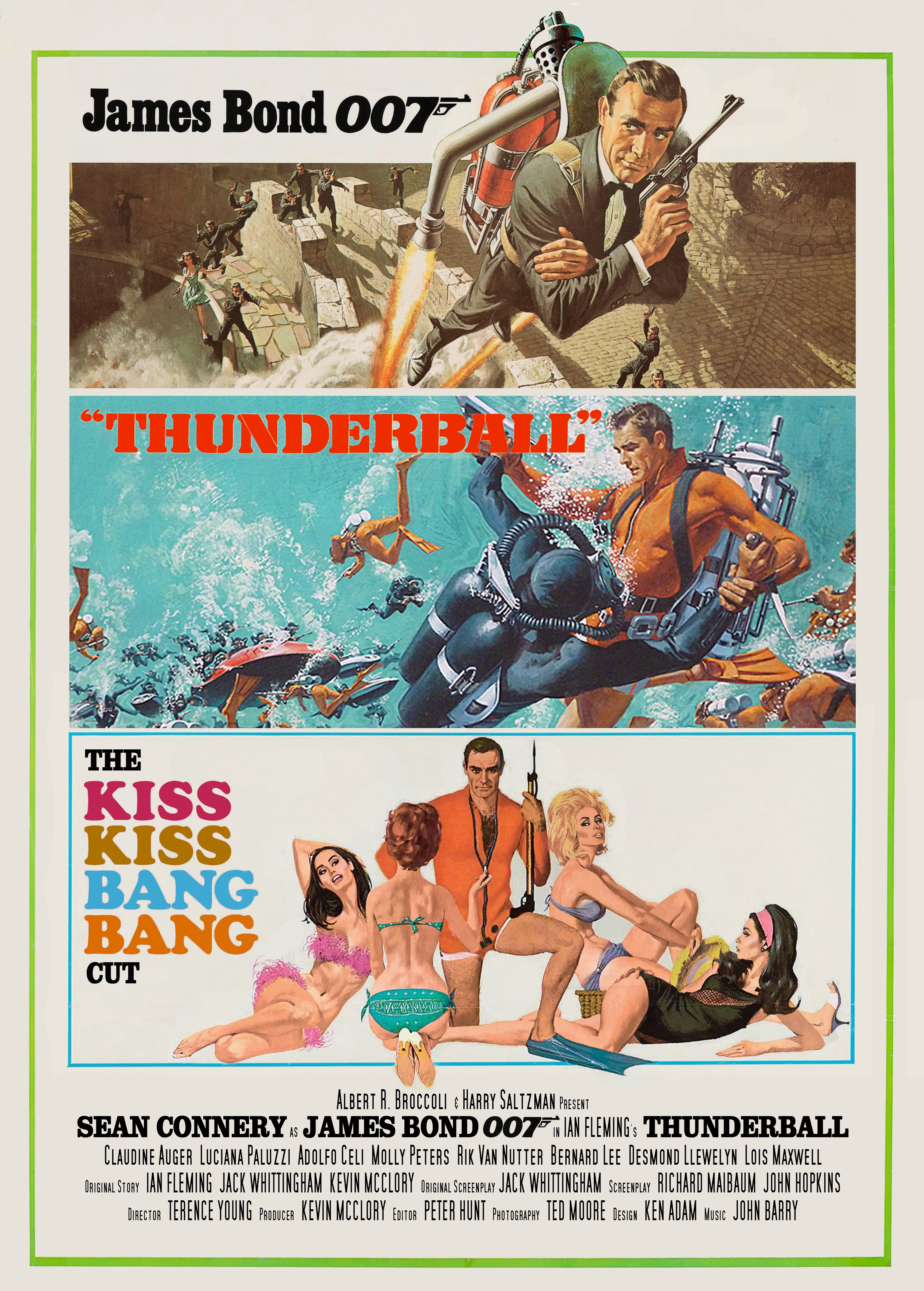 Here's the cover. The layout is consistent with my Skyfall edit and my unfinished Diamonds Are Forever edit. They look good together (if I may say so myself). It makes me enthusiastic to get back to work on my Diamonds edit. 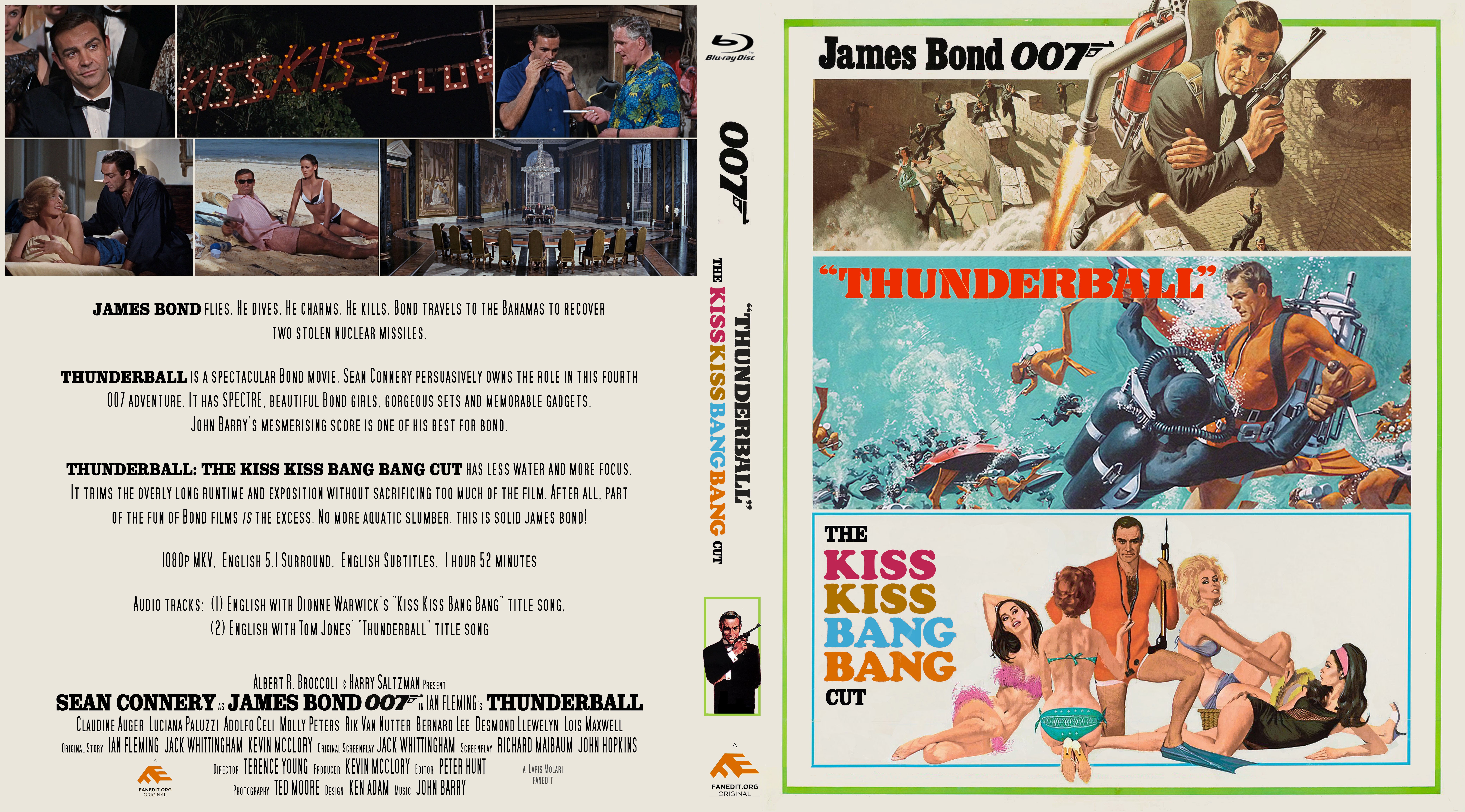 Thanks Motley. Happy holidays to you too!
Bond is a holiday staple for me, so I put in the extra hours to get The Kiss Kiss Bang Bang Cut finished in time to watch it with the family this week.

lapis molari said:
Thanks Motley. Happy holidays to you too!
Bond is a holiday staple for me, so I put in the extra hours to get The Kiss Kiss Bang Bang Cut finished in time to watch it with the family this week.
Click to expand...

Good for you, lapis! Watching your own fan cut with family — couldn't be more important than on Christmas Day. Be sure to check out what I have in store for the community!

The real question is: did you cut the shot of the poorly little sharky getting harpooned in the underwater battle? Poor little sharky...

BTW, thank you for the time you took to find the gold from the uneven monstrosity that is Thunderball! Any plans on tackling You Only Live Twice next?

DutySnouted said:
The real question is: did you cut the shot of the poorly little sharky getting harpooned in the underwater battle? Poor little sharky...

BTW, thank you for the time you took to find the gold from the uneven monstrosity that is Thunderball! Any plans on tackling You Only Live Twice next?
Click to expand...

Yep, the shark still gets shot. I thought it remarkable that they shot a larger-than-human shark so close to the scuba divers. I would not have gone in the water on that day of filming!