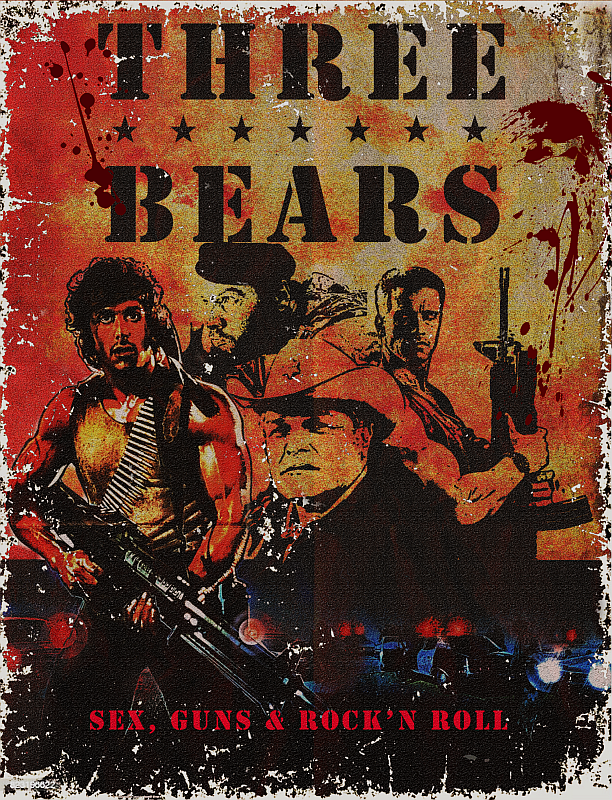 After Star Beast I was planning to do something with First Blood, but there's more ideas now, so I am not yet sure what it will be. I've edited few scenes to check if some of the ideas work, it seems they do. Unfortunately it looks like there will be a problem with re-scoring, because central channels are full of music. So it may end up with only little changes to the music, but I need to check out all editions of the movies I have on my shelf (old DVDs, and two versions of Blu-ray).

At first, I was only planning to do a little altered grindhoused First Blood, but now, I am not sure anymore - it seems that it may be original Rambo trilogy combined into one narrative with some little additions from other movies. And as I needed some grindhouse trailers for Star Beast I've just started this project from that. A trailer which may end up as a trailer for this edit, but I am not sure yet.

https://www.reddit.com/r/fanedits/comments/tjlutf
Anyway, it's in the works now.

It is almost done, so more details:

- primary storyline is First Blood
- there is a flashback about Rambo's life from before events of the movies build from elements taken from various movies
- II and III are compressed to the form of flashbacks tied to the main plotline.
- a fake AI Rambo voiceover created through fakeyou.com site applied to the whole film, he is commenting events depicted in the edit Forrest Gump style.
- there was no excessive re-scoring ( I was going to do it, but source files are not re-scoring friendly) so it is still mostly Goldsmith music, but some songs and music were added to newly created scenes and to scenes which had originally no music at all. Some little re-building SFX in few instances.
- some deleted material from First Blood and Rambo III from Ultimate Blu-ray edition has been included
- additional footage from 12 non-Rambo movies was used:
Are you sure you want to know?
Platoon, Apocalypse Now, Forrest Gump, Party at Kitty and Stud's, Twogether, Rhinestone, Rocky II, Hot Shots Part Deux, Predator, Commando, Robocop 2, The Terminator.
Sometimes it is 1-2 minutes, sometimes just a few seconds.
- additional music by:
Creedence Clearwater Revival, The Doors, Jon Hare, Pornosonic, Lynyrd Skynyrd, Sammy Hagar, Jimi Hendrix, AC/DC, Pride & Glory, Mike Post, Simon Boswell and... Sylvester Stallone
- most of the scenes in First Blood that doesn't include Rambo himself have been cut. The story is now shown mostly from his point of view but there are still some exceptions from that (but we never leave Rambo for more than seconds).
- grindhouse effects of varying severity added thoughout the movie
- be warned that this edit includes high amount of swearing as well as nudity and sex scenes not present in original Rambo movies.

Final running time is 111 minutes, which includes around 67 minutes of First Blood (including credits and alternative/deleted material), 8 minutes of Rambo II and something like 25 minutes from Rambo III. So, a little more than 90% of it is Rambo, the rest is the material from various non-Rambo movies.
Last edited: May 16, 2022

For the first time ever, I did some notes and the whole editing plan. The decision has been made and it will be indeed the full length version of one of the trailers attached to Star Beast. It looks like it will be also the most complicated project I've been workin' on so far, but I'll take me time and won't rush it.

I've just completed few scenes which combined footage from various movies and showed one of them to my wife to see her reaction. She bursted with laughter, so yeah, don't expect too serious edit here...

Talking about inspirations... Been listening to that song recently:


and even ended up reivisiting that game. So much fun indeed.

And one of the main inspirations is (as seen in said trailer) Arny Vs Sly mashup by AMDSfilms. I just want to do something similar but in better video quality and put it into context of an actual movie/edit.

PS. My vimeo account has been deleted recently (because the trailer for that project) but that may help me to not show more of the footage before the edit is ready. We'll see about that.
Last edited: Apr 28, 2022

After I've spent a few days editing one complicated 6 minutes sequence, I needed a little break so I did a poster (added to opening post).
Last edited: May 16, 2022

https://www.reddit.com/r/fanedits/comments/uerxd5
(there's an error with logo framing which will be corrected later)
Last edited: Apr 29, 2022

How are you creating the Rambo voice over????

There's a site which allows to convert text into a voice of some actors/characters through some AI. It doesn't always works right, sometimes you need to write something with spelling errors to have it properly said . And it is hard to get a proper accent so I need to change some of the ideas on the fly, but it is still a lot of fun to work on it.

As for the project itselt - It's gonna be a mix which includes not only Rambo movies (they're still the main course though, the rest are just spices/desserts), but some other with Stallone (and some without him too) - If I'm not mistaken, it contains footage from 12 movies at the moment. It is still far from being complete, but I think it may be a final number (until some new ideas arrive that is ).

This looks very interesting, Gieferg! Sounds like you have your work cut out for you!

If you are taking song suggestions... may I nominate "Children of The Sun" for the third time?

It's instrumental version was in Star Beast for a moment... until it was replaced (in the scene when the team leaves ship on LV-426). Not sure if there will be place for it here (especially that because there is music in central channel almost all the time, it won't be so intense re-score as it was in Star Beast), but hey, it's (hopefully) not my last project so...

Regarding your opening credits, and forgive me if I am mistaken as its been awhile since I have watched FIRST BLOOD, but wasn't there already hard encoded title cards on that scene? If so, how did you remove them? And if there were, holy cow, very impressive!

bionicbob said:
but wasn't there already hard encoded title cards on that scene?
Click to expand...

Yes. But the shots with them were static (almost), so I used some masking to get rid of original credits. There are some imperfections because of that visible on the video when you watch close enough, some of them will be fixed (one was already fixed), some won't because it's a little beyond my skills (or patience).

Any suggestions of a classic rock song (60s/70s preferable, which doesnt mean it can't be from later decades) which may work as a soundtrack for a chase scene?
(I have one, but maybe there is something better that I am not familiar with).

I've just spent half a day on voiceovers for first half of the edit. It was fun thing to do.
Last edited: Apr 30, 2022

One chapter (around 15 minut I suppose) left to do, then some audio tweaking/re-scoring and finishing touches. Most enjoyable editing process ever :>

Also, I've used the song BionicBob suggested but not in the scene I had in mind when asking for suggestions. Worked so perfectly I couldn't resist.

I've read somewhere that someone did an edit where Chuck Norris is Delmar Barry. Well, in that case I'd rather see in that (small) role African-American actor, and that's how it was done in this edit.
Last edited: May 12, 2022

Rough cut assembled. There are still some fixes and some audio work to be done.

I just wonder, how many mistakes there will be in the voiceover as I am not native english speaker, and sometimes I may have used some verbal constructions that are not really english. Also, the AI used isn't perfect and it was sometimes really hard to make it say what I wanted it to say. Sometimes it just didn't work and gave blank file as a result and sometimes I had to type something wrong to make it read it as it should. Tricky thing. Sometimes accent seems to be off, and I can imagine it will be way more weird/distracting for native speakers than it is for me.

Added some details to opening post. I expect it to be released before next weekend (as usual, initially it will be version without grindhouse trailers, that will come later).

Gieferg said:
Rough cut assembled. There are still some fixes and some audio work to be done.

I just wonder, how many mistakes there will be in the voiceover as I am not native english speaker, and sometimes I may have used some verbal constructions that are not really english. Also, the AI used isn't perfect and it was sometimes really hard to make it say what I wanted it to say. Sometimes it just didn't work and gave blank file as a result and sometimes I had to type something wrong to make it read it as it should. Tricky thing. Sometimes accent seems to be off, and I can imagine it will be way more weird/distracting for native speakers than it is for me.

Oh well, hope it will still be funny.
Click to expand...

Judging from the trailer, the voiceover is pronouncing "bears" as "beers". Just notice how Trautman pronounces it, and compare.

Yes, I've noticed that and it was already corrected. So no more "effing beers" in the edit itself Trailer was done when I wasn't too familiar with how that thing really works.
I had to write "baers" instead of "bears" and then it reads correctly. There were quite many such situations, sometimes I wasn't able to get the right result so I tried to change the line to have the same meaning by using different words. There is also no way to control the emotions which we can hear, so it was sometimes quite surprising when AI said something with some unexpected emotion some of these lines remained in the edit as I've found them quite funny.
Last edited: May 16, 2022

Eyepainter said:
My only other complaint is perhaps a song or two that feels out-of-place.
Click to expand...

Out of curiosity, which ones? (you may use a spoiler tag)

In case of Star Beast I think I can guess - there were some quite divisive choices that some people love and some not, but here, I'm in the dark.

Gieferg said:
Out of curiosity, which ones? (you may use a spoiler tag)

In case of Star Beast I think I can guess - there were some quite divisive choices that some people love and some not, but here, I'm in the dark.

and btw, thanks for the review
Click to expand...

My answer was AC/DC's Highway to Hell, because I associate AC/DC with the 1980s (a decade I don't often associate with the phrase "grindhouse"), but then I realized "Hey, wait! The Bon Scott era exists!" And looking back on the song history, it turns out the song was released in 1979. So, basically, I'm the moron here, and I'm gonna have to go back and edit my review (Which I'll have to do when I get off work tomorrow)!
You must log in or register to reply here.
Share:
Facebook Twitter Reddit Pinterest Tumblr WhatsApp Email Share Link
Top Bottom