The War of the Stars II - The Future in Motion

THE WAR OF THE STARS II - THE FUTURE IN MOTION 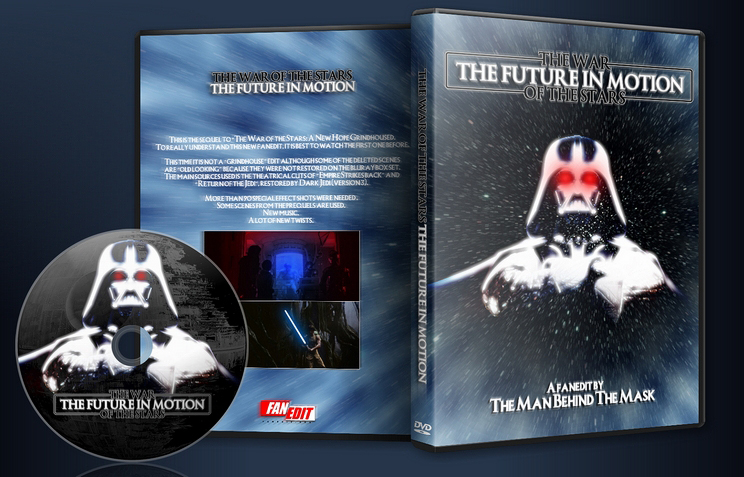 This is a sequel to The The War of the Stars: A New Hope Grindhoused, released in 2010. The goal is now to mix "The Empire Strikes Back" and "Return of the Jedi" while taking care of the changes made for the first edit. A lot of deleted scenes are also back in this edit.
Some hopefully intertaining twists and more than 90 new special effects turn this project into
something that I think is special even if maybe not as "fun" as the first edit. Or fun in another kind of way.
(This is not a "grindhouse" version, although some of the deleted scenes are looking old and the main sources used are from the Original Theatrical Cuts released in poor quality in 2006 as a "bonus" to the special edition DVD).

INTENTION:
With the incredible praise following the release of the first edit (thank you all!), a lot of people asked for a sequel.
But I already made my "silent Star Wars" before and I thought that it was enough Star Wars for me
and so I made various edits of other movies for a while, and I'm glad I did that.
But the question was brought back each time I finished a new edit: "Will your next one will be Empire Strikes Back "grindhoused"?
At one point I thought about making a "VHS style" version of ESB but I did not have many ideas back then.
Then, the Bluray box set of Star Wars was released with a lot of deleted scenes and I thought that an edit mixing
ESB and ROTJ along with those deleted scenes would be great. But I also wanted to keep a "Star Warsy" lenght. Meaning not
much more than 2h20 max. So a lot had to be cut too. It was a interesting challenge and I also thought the "grindhouse aspect had to go. But to really make a sequel to my edit, a lot more work was needed.
The fanedit where I used special effects the most was ALIEN-ATE, my version of Alien 4: 18 effects, and it was tiresome to do. "The Future in Motion" has more than 90 special effects... I started with a few in mind, then the number could not stop
to grow and grow! Now, I'm proud on most of them, they are not all 100% amazing but for an edit that is not supposed to be "better" but more an "alternate take", I think they are good.

EDITING DETAILS:
Main original source used: the Theatrical cuts of ESB and ROTJ from the official 2006 bonus DVD releases.
The version I use in my edit are from a "restored" version made by Dark Jedi (he made several versions, this is his version3).
So don't look for a perfect quality since the 2006 theatrical release was in 4:3 letterboxed. Dark Jedi made wonders, but it's obviously not
as clean as the special edition DVDs and a lot more grainy. I used those versions because I feel the original colors of the theatrical cuts are
truer to what I remember when watching Star Wars for the first time and I somehow wanted to have a little nostalgia feeling for this edit.


The 24 minutes added time is counting:
The deleted scenes of ESB and ROTJ ( about 10 of them. Some very short.)
some Star Wars prequels scenes
some scenes from A New Hope
Some short shots used from other movies, and most of the time changed with new special effects or heavily color corrected.
Shots from two fan films: IMPS the relentless Chapter 2, and Boba Fett Chronicles The Hunt for Varrada.


The new music used are mainly from Gustav Holst's The Planets, Ulysse 31 (revisited by Parallax),
and also I used a theme from War Horse, by John Williams.


NOTE: Some voice replacements from other movies (or from changing the voices from a scene to another) could be a bit jarring sometimes.


There are too many cuts to make a real cutlist. But I would say that most of the edit is from "Empire Strikes back"
and the last 30 minutes or so are from "Return of the Jedi". But there are scenes from ROTJ reorganized to
appear during the events of ESB.

CREDITS:
Special thanks to:
L8wrtr, Angel and Neglify for previewing my workprint (Angel also provided solid bases for two of the new special effects), and to everyone's support at fanedit.org.

Soon to be released in a galaxy near you....

Yes! I've been looking forward to this one for awhile! Congrats on finishing.

Awesome! Looking forward to this A LOT.

Watched this for the second time today. I'll try to keep my thoughts brief and not spoil any surprises.

War of the Stars II succeeds in its own right and is a wonderful follow up to the first edit. There were many times I was blown away by how TMBTM changed things. The opening sequence lets the viewer know right away that this is a sequel to WAR OF THE STARS, not just a fanedit of ESB and ROTJ.

I personally loved that this was not a Grindhouse movie and that some of the added scenes and effects didn't have the same consistent look throughout. It added to the mythology of it all, as if the director of this movie blew his budget on two sequences so had to go cheap with some other effects. And maybe even the original director never fully finished the movie and some scenes were re-shot by someone else.

TMBTM has succeeded in making a truly great sequel to War of the Stars without falling into the trap of making a carbon copy of the first one.

A lot of hard work went into this making this and it paid off well. 10/10.

I can't wait for this to be made available... Congrats on finishing the edit TMBTM

What they all said. Can't wait.

I rewatched part I yesterday and managed to get a glimpse at the opening of part II - holy hell, this is just something really cool and unique!

Downloading the avi now! Cant wait to watch TM! I also must say how fast the download is, whole things only taken approx 10mins!:-D
Will leave a little feedback later.

sweet, can't wait to watch this
why do I have to be stuck at work for the next 5+ hours. Oh the frustration...

Incredible Work 10/10... this is a masterpiece - a term I have never before associated with fanediting, such a big congrats, review to follow

I'm going to keep this short and sweet......"It's fan-edits like these that I love coming to this site!"

TMBTM you truely have outdid yourself. I waited patiently like many others for this to finish downloading so I can watch it. As always, I didn't come away from my viewing experience disappointed in the slightest. I'll have to admit you kinda dug yourself into a hole after the events of Part I and I didn't quite know how you were going to figure that out. But, with clever editing that I've come to expect from you, you managed to save yourself and in the end create a worthy sequel to its predecessor. Who said that all prequel footage is useless?! LOL.


Big congratulations for bringing dignity back to everyone's favorite bounty hunter. That put a big smile on my face....even though he still went out with a bang! No pun intended.
Congrats TMBTM for knocking another fan-edit out of the park. Phenomenal job!
You must log in or register to reply here.
Share:
Facebook Twitter Reddit Pinterest Tumblr WhatsApp Email Share Link
Top Bottom