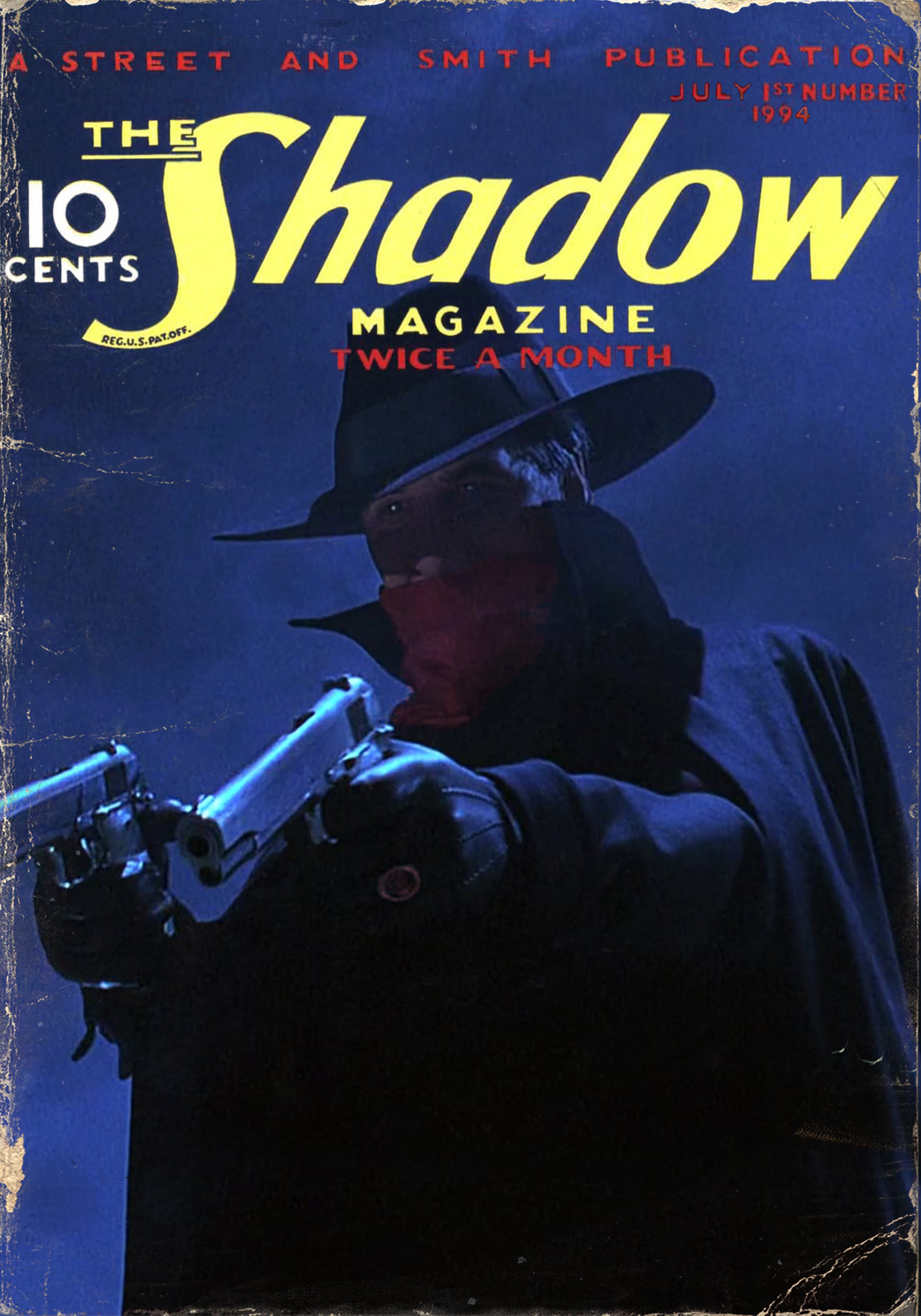 Guess I'm a pulp fan then. This is a work of art. Although I like the chunkier line around the title used on the other posters.

@TM2YC, the title with the fatter line is taken from a comic book cover. The thinner line version is a scan from an actual 1930s pulp cover.

Yeah, this cover is my favourite too. I'm happy how I succeeded in making it look clean and simple. It took some work to get the date to appear exactly like the real pulp cover dates, and I needed to split the photograph into 4 layers to adjust colours (the promotional still is more monochromatic and darker).

I'm back to work on The Shadow!

I got helpful insight when I read this quote from the director: "I guess the producer had, I think he had a slightly different vision of the film than I did. So, for example, with the knife. I wanted that to come to life and be animated. And there was a bit of a struggle in trying to make the film, maybe, a bit more fantastic. I think he wanted to make more of a 40’s retro romantic film. And so we did have some discussions about “we should add more fantasy into this film, more effect.” – Russell Mulcahy in “How Did This Get Made” Interview.
I think that the actors hedged their bets and tried to accommodate both. The result is an inconsistency, including in the type of humour, which I never realized before but now I can't unsee it.

So this edit of the Shadow has an added goal: improve the consistency of comedic tone.

One of the rules I set for myself when I edited The Shadow was to remove any jokes/one liners uttered by The Shadow. If fact, try to remove any real emotion from the Shadow as much as possible, as he should be Cold and Calculating as possible. Also removed any jokes when there was a death, be it in the foreground or background... such as the man who falls off the Empire State Building.

@bionicbob , I'm looking at the final scenes and I'm curious what you think about:

1) I think the mental institution where Khan is operated on was intended as a crossover set-up for Doc Savage. I'm surprised that this giant Easter Egg isn't mentioned in any online review. I guess it's not obvious enough. Shall I add "Upstate New York" as a location text, the same style as "New York City" when the film opens on the bridge?

2) I dislike the kiss at the end. While we may think that the two of them are intimate, we needn't be shown. But cutting the kiss makes that scene too short, making it obvious that something was cut. You kept the kiss in your edit. Have you since figured out a way to remove it? Right now I'm inclined to keep it in for the sake of story-flow.

2. I don't mind the kiss, it feels very old Hollywood to me. But I too did originally considered cutting it but had the same issue that the scene felt interrupted and too short.

The first of Cranston's three dreams. This tells us who taught him how "to cloud men's minds".

The second of Cranston's three dreams. This one shows that he was a murdering warlord.

The third and final Cranston dream. Here we see that he wasn't just any villain, he was a ruthless nasty one.

I did a final viewing of my edit, and only now realize the similarities between The Shadow and Doctor Strange.

- Our hero starts as a talented but selfish, insensitive person,
- He finds a hard road to redemption in a remote place in Asia,
- From a bald-headed Asian mentor teaching him mystical abilities which he must use for good.
- The villain in the movie is a fellow/former disciple of said mentor, who mastered the mystical abilities before betraying the mentor.
- The hero fights the villain in the hall of mirrors / mirror dimension (different names but visually remarkably similar).

Stan Lee and Steve Ditko grew up with radio and pulps, so it's understandable they were inspired by The Shadow. Still, their Ancient One does seem a lazy copy of the Tulku.
The mirror dimension did not exist in the comics, it was first introduced in the 2016 movie, 22 years after The Shadow movie. Louis D'Esposito worked on both movies. It's visually very reminiscent! Yes, I know The Shadow's mirror room was inspired by Orson Welles' The Lady From Shanghai (1947). But the visuals in Strange are much closer to Shadow than to Shanghai.

This movie deserves a good trailer, one that persuades the viewer to "pick me up and buy me". The original trailer and teaser don't do it for me.

And the official teaser:

I'm terrible at trailers though: I try to put in everything and end up with a six-minute clip. So much needs to be left out to keep a trailer's runtime under two minutes, and every attempt feels like a disservice to the movie.

Suggestions are very welcome! (Other than this, the edit is now completed.)

Trailers can be very challenging! Often when I used to create a trailer, and did not have specific concept in mind, I would first pick a piece of music no longer than 2 minutes (though I find the shorter is better) and then just begin inserting imagery into the timeline to go with the music, and as I experimented with clips, the pieces would somehow fall into place. Remember, the trailer is just to tease and entice the viewer.... so start with the lots of cool imagery and/or intriguing pieces of dialogue... throw them into the editing blender and see what happens.

The talented @Rogue-theX made this incredible alternate poster for The Shadow Knows. Yes, that's an actual painting! Wow! 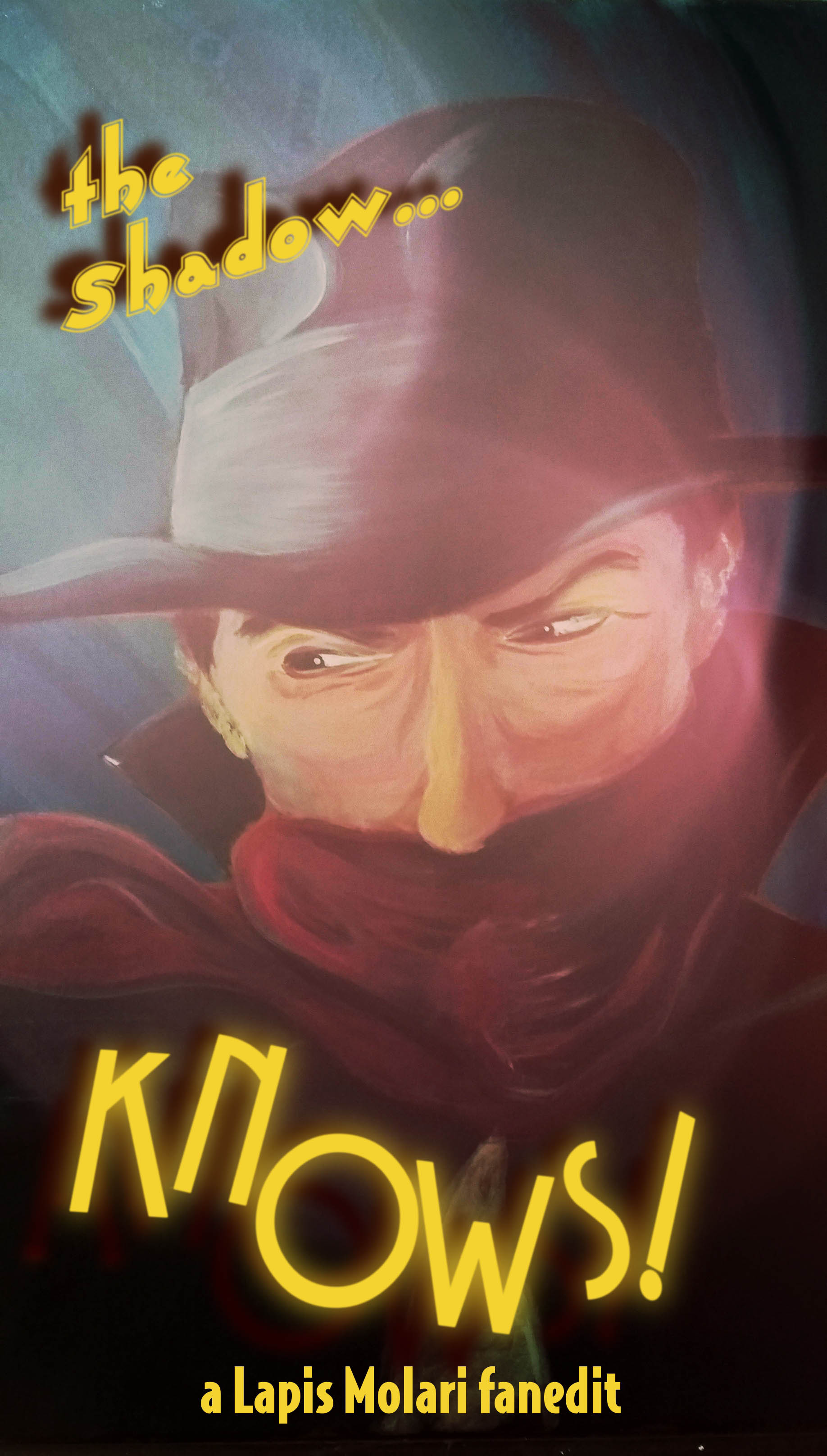 Spectacular edit.
As I wrote in my review, the slight trims improve the pacing greatly, and truncating the Tibet scenes was a terrific choice. I also loved the new opening credits - they are a lot more meaningful than the original.
Two minor suggestions:
1) I think there's no need to open the film with 'The Shadow knows' and the laughter (at the 2:11 mark), since their are said again at the end of the first scene and are actually meaningful there.
2) One way to slightly extend the mirrors climax is to insert at 1:30:05 the scene in Tibet in which Ying-Ko is taken to the Tulku's temple and is told "The clouded mind see nothing" (04:33-05:07 in my version). This might help facilitate the Shadow's increased mental ability. Alternatively, it can be used to right before he masters the Phurba.
All in all - an excellent edit.

boazz750 said:
2) One way to slightly extend the mirrors climax is to insert at 1:30:05 the scene in Tibet in which Ying-Ko is taken to the Tulku's temple and is told "The clouded mind see nothing" (04:33-05:07 in my version). This might help facilitate the Shadow's increased mental ability. Alternatively, it can be used to right before he masters the Phurba.
Click to expand...

Interesting. Instead of adding another flashback, this might work by adding a repeat of the shot where The Shadow struggles with the Phurba, with the Tulku's voice as a voiceover.

@SALTL4F3 said: The only part that caught my attention and made me do a double-take was the "next time you get to be on top" bit. In order to get rid of the joke, the line was muted, which creates an odd 1.5-2 second scene of the Shadow just menacingly staring at the guy's dead body in silence. Even though the goal was to erase the joke, it ended up still being kind of funny.
Click to expand...

Thanks for your generous review. It's always nice to hear when your flow and transitions are seamless for other viewers too.

Yeah, I went through several versions of that shot. I was always going to cut the line, so the questions became a) how long do I show the shot and b) do I dub in a different line instead?
None of the lines I tried worked better than silence. The Shadow made quite a fall, I'm okay with him not having a witty reposte in every single instance. And when I trimmed the shot even more than I did in the final version, the transition felt too quick, betraying that something had been cut.

@bionicbob, your review made me laugh out loud.
And flattered. Thank you.

Thanks for spotting that. I'm rendering the fixed Version 2 now.

And since I'm re-rendering for the fixed water tank, I also went back to the muted "next time you get to be on top". In Version 1 that shot was trimmed from 64 down to 48 frames, I've now trimmed it down to 24 frames. I can't cut it completely because that would create an ugly jump-cut of the Mongol warrior, and I don't want to make it shorter than 1 second because then it's a clear giveaway that something was cut there.

I gotta say, I'm thrilled to see so many people ask for and comment on The Shadow! Hopefully Hollywood will find a way to bring our troubled crusader back to the screen.

Wow, I got the highest compliment for my Shadow edit: I watched it with the kids last month and they liked it so much they've made a custom character in their Lego Marvel Super Heroes 2 game. I present you with The Shadow, animated Lego style! 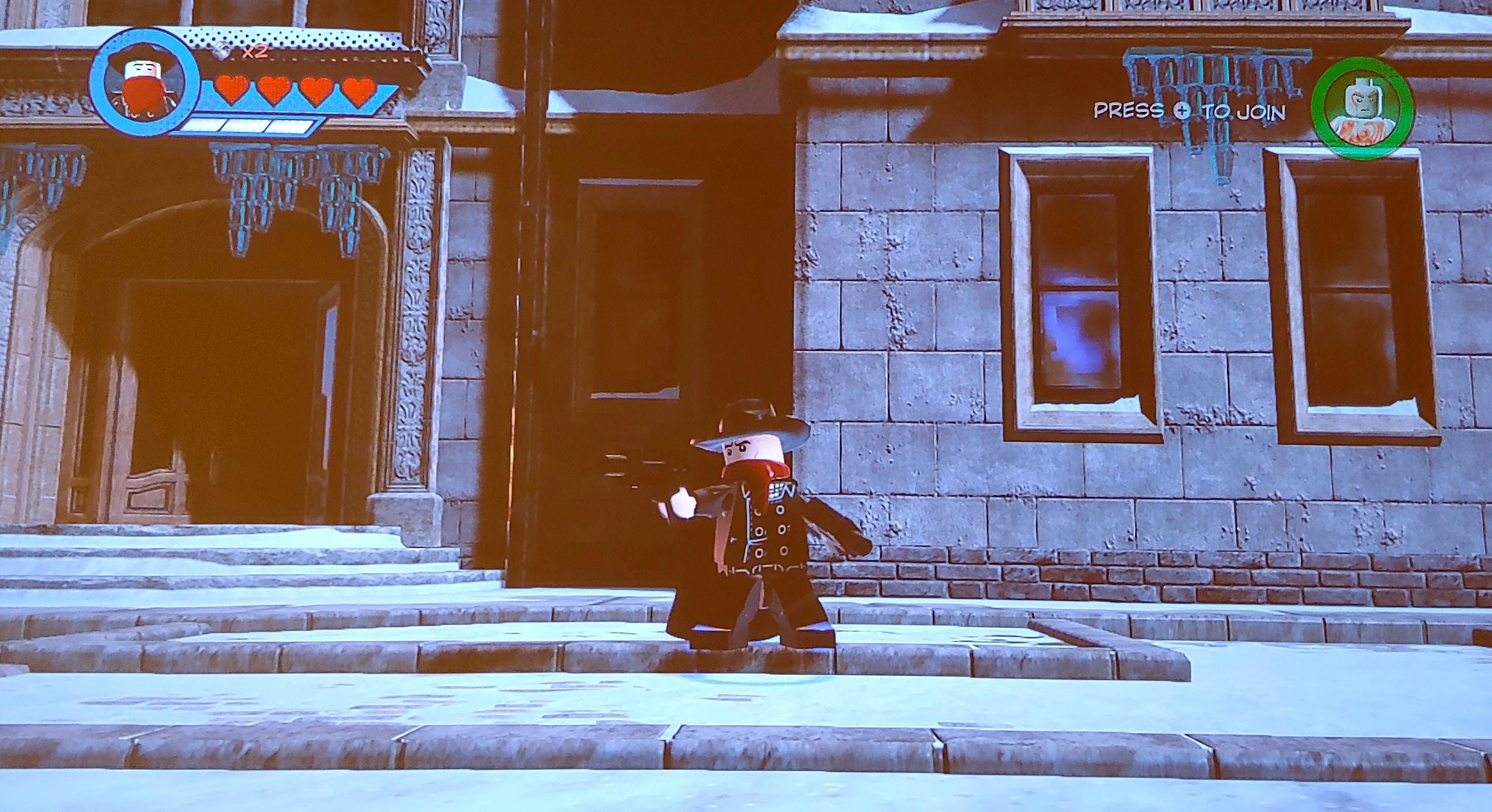 Lee van Cleef would have made an AWESOME Shadow. His eyes, the prominent nose, his posture. He could have been the definitive Shadow in the 1960s! 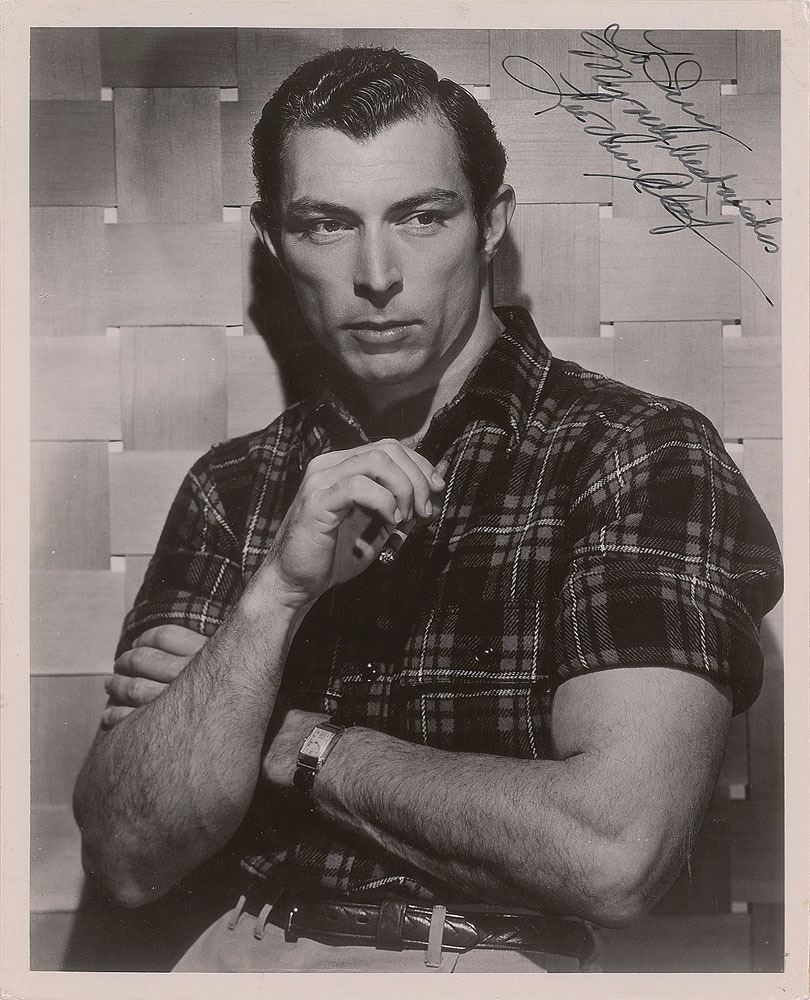