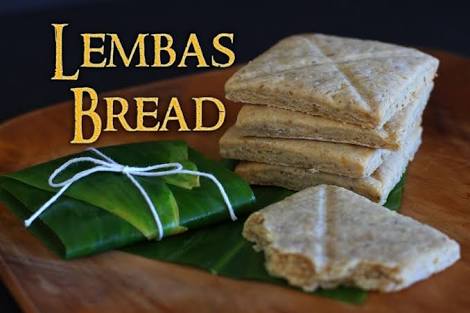 Preheat oven to 325 degrees. Cream together the butter and sugar or honey. Add the flour and mix until thoroughly incorporated. Put out on suitable surface and knead until quite smooth, about 5 minutes, adding a bit of flour if necessary to keep dough from sticking.Roll out to about ¼ inch thickness and cut into 3" to 4" squares, scoring with a knife halfway through each square with a butter knife. Place on buttered cookie sheet and bake for about 20 to 25 minutes, or until lightly golden brown. (Note: I have not done this)

"In order to ease the pain in his throat from voicing Gollum, Andy Serkis would drink "Gollum Juice", a mixture of honey, lemon and ginger." - http://news.bbc.co.uk/cbbcnews/hi/chat/hotseat/newsid_2853000/2853041.stm#q16

Cut a few chunks of ginger and peel the skin off with a potato peeler. Toss these in a pot with two cups of water. Boil until the water begins to darken and reduce. Remove from heat and add the juice of a whole lemon. Crush in two cloves and allow to sit for a minute or two. Pour through a strainer into a large mug or thermos. Add honey to taste. You can also add apple juice to further sweeten the flavor. Excellent for singers, voice actors, or anyone with a sore throat! The ginger extract can get quite spicy, so if you're concerned about this just don't boil the extract as long.

10-20 minutes depending on ginger-boiling time (Note: I have not done this yet)

So is this thread only for movie related recipes?  Because I have a killer spicy stir fried green beans recipe that has been beloved by everyone at every gathering I've taken it to.

^ Nah, it's for everything
M

Junglist Paja said:
^ Nah, it's for everything
Click to expand...

Once your meat is at its target temperature, remove from oven and pat dry one more time. Then place on a smoking hot cast iron skillet and sear all sides. You want to get a browning good enough to get the Maillard effect. Serve immediately. No rest necessary. Enjoy the best steak you’ve ever had.

Reduced sodium soy sauce. (The Weber seasoning already has salt in it so you'll get enough salt trust me). All this can be got at Wal-Mart.

Also I don't have specific measurements for anything because i always eyeball it,  so it comes out slightly different each time. But i like that.

Heat up a small amount of oil (zero calorie cooking spray works well too) in a skillet over high heat.  Drain all the water from the can of green beans and add them to skillet.  In skillet sprinkle a modest amount of the Weber seasoning,  a decent amount of black pepper,  and as much red pepper for how spicy you want it to be, I use a ton,  stir frequently to ensure seasonings are evenly covering green beans.  Let sizzle for about 4 minutes.  Then add a medium amount of reduced sodium soy sauce, turn off skillet,  and stir until it stops sizzling.  Don't add any starch or thickener, you don't want the sauce to be thick for this dish.  I don't anyway.

What you'll have is a delicious and savory green bean that's an entirely different experience than the typical American sweet and soupy green beans,  this won't be sweet at all it'll be savory.  I've never really tasted anything similar to compare it to,  but I can tell you it would be a great side dish with the above described steak ??

Form eyeball-size pieces from the dough
Roll in the powdered sugar
and say the Magic Words:
"Sim sala bim bamba sala do saladim"

Place on a greased baking pan and
Bake at 200 degrees for 15 minutes
...AND NO EGGS

Form eyeball-size pieces from the dough
Roll in the powdered sugar
and say the Magic Words:
"Sim sala bim bamba sala do saladim"

Place on a greased baking pan and
Bake at 200 degrees for 15 minutes
...AND NO EGGS

Grab a small handful of mint from the planter on the patio.

Throw it into the bottom of a cup with half a spoonful of sugar on top and muddle it up good.

Cut a lime in half and squeeze half of the juice into the cup. Save the other half for later.

Throw three ice cubes in there.

Fill the cup halfway with rum.

Fill the other half with orange juice.

Anyone else doing some more experimentation while social distancing? I’ve never been much of a cook and my wife is a really good cook and loves it. So she usually cooks and I clean. But here in Germany she’s been working longer hours and I don’t work so I’ve been cooking more.

This is pretty easy and I’m sure I’m not the first to do something like this. In fact I was trying to replicate something I had in Italy over Christmas.

(Over 250g of Tagliolini or your favorite pasta)

1. Sauté five chopped cloves of garlic in olive oil
2. Add a can of anchovies in oil, two tablespoons of capers, and two teaspoons of red pepper (chili) flakes.
3. Mix together thoroughly over medium heat for only about a minute.
4. Drain your pasta and return to pot and add in the sauce. Mix thoroughly to coat. The anchovy sauce should be a nondescript paste with capers and garlic.

People are scared off by anchovies but it doesn’t taste fishy in the least. My seven year olds loved it. 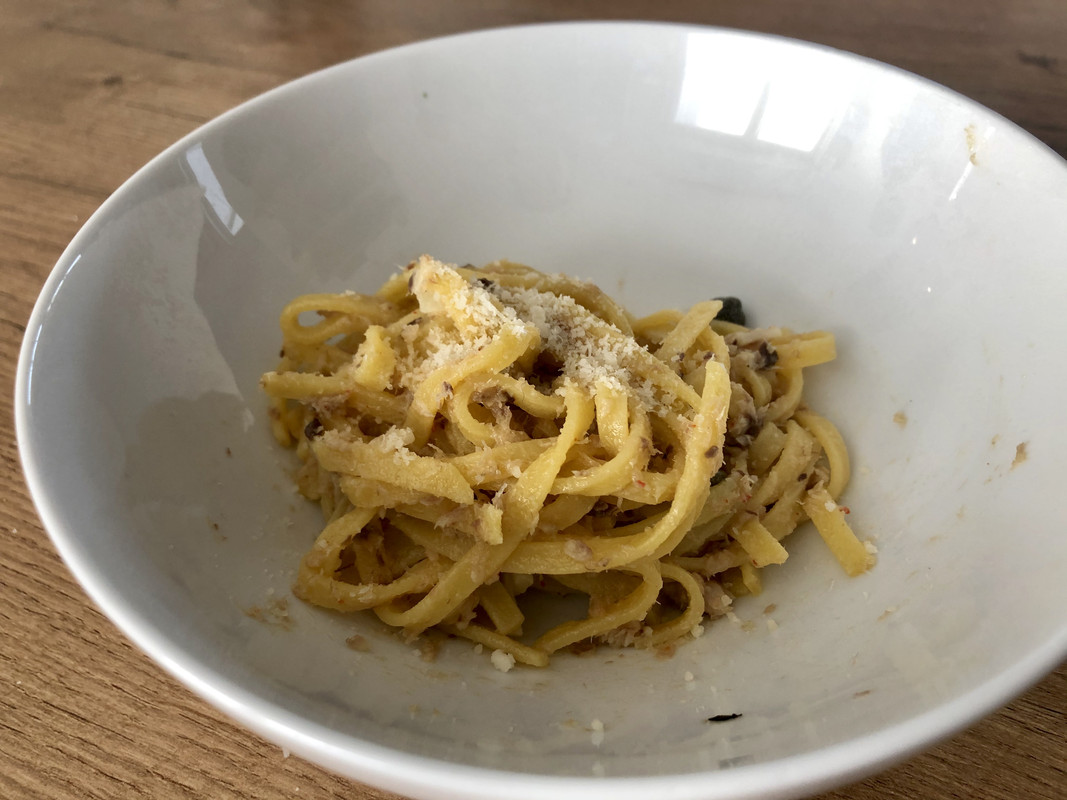 Moe_Syzlak said:
Anyone else doing some more experimentation while social distancing?
Click to expand...

Absolutely. I've been doing way more cooking these days. I really enjoy cooking if I've got hours to potter away, with a few cups of tea and music radio on, so more free time is ideal for that. Plus I'm trying not to waste anything and only go to the shops once a week at most, so I've been getting creative with whatever I've got. I find milk is the only thing you can't do without restocking regularly but I've been supplementing it with long-life Soya milk to make my supply last longer (which I love in coffee anyway).

I cooked a leg of lamb the other day and a nut roast for the vegetarians, which I'd never tried before. Nut roast can be really awful but I went with this mushroom one off youtube:


I swear it was almost better than the lamb (and the lamb was very good, if I don't say so myself). I used all different cheeses to the ones he mentioned, threw in any nuts I had in the cupboard instead of walnuts, used different fresh herbs and used white rice soaked in a little soy, instead of brown rice but it all worked anyway. I adhered to all the proportions though. I made a Porcini mushroom gravy to go with it too. Highly recommended recipe.
You must log in or register to reply here.
Share:
Facebook Twitter Reddit Pinterest Tumblr WhatsApp Email Share Link
Top Bottom