I saw there's a thread for The Prisoner mini-series remake, but are there any fans of the Patrick MacGoohan's immortal original (from 1967) in this place?

I love it. The quality of the writing is some of the best I've seen (in most of the episodes, at least), and the last episode is the finale to end all finales. It's just so rich. There's art cinema narrative sequences and there's ridiculous 60s sci-fi capers, and the style of it looks like nothing else on earth.

It's probably a tie with Twin Peaks for my favourite TV show. Sadly, like with Twin Peaks, there are major clunkers. Oh well, that's just the way it is. But the best hours are in some cases almost too good to be true, and above and beyond most of even 60s art cinema, imo.

PS: Which episode is your favourite? I'm tied between Free for All and Many Happy Returns (with the first and last episodes being other obvious candidates).

It's a great series, one of the oddest ever made. Surreal plots and absurdist scripts, sure, that goes without saying. What really struck me was the spooky stilted oddness of the atmosphere. Something about the direction, acting, costumes and sets, so portentous and artificial, it's like the shows were obsolete before they were broadcast. And they're still relevant too.

I've even thought about a TV-to-movie fanedit. I have an idea for it, maybe I'll do it sometime when I have the time.

My favorite episode is Living in Harmony, the one that was censored from American TV. I like all of the first 13 going by the DVD order. Some are rebellion plots and some are escape plots, I like the rebellion plots more.

Didn't care for the final three, but if a mashup of Benny Hill, Samuel Beckett and James Bond appeals to you, give 'em a try. 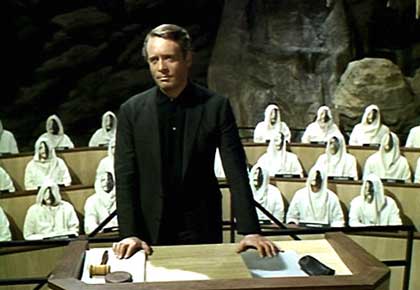 Haha! I'm kinda confused which is which of the Benny Hill, Samuel Beckett and James Bond episodes - "The Girl who was Death" is both Benny Hill AND James Bond! Although I can take or leave that one, I still gotta admit the sheer ridiculousness of both the style and the premise. I've honestly never seen anything like it.

I like the last two a lot. Once upon a Time is the most intense episode I've seen of anything. It reminded me of a play I once saw (based on Chekhov) that was so intense I wanted to leave, although nothing bad happened. Fall Out is crazy and divisive, but ultimately I think it works really well.

Btw, if your favourite episode is Living in Harmony, you're bonkers - in a good way!

(For the newbies: The Prisoner had a questionable use of dates in episodes, and the running order got scrambled from the very beginning when they were behind schedule. When they finished shooting and ediiting what was by all accounts a later episode before the others, that episode got broadcast as the second episode, even though the escape attempt is almost ridiculously elaborate and makes no sense so early. Also, in two of the episodes that were eventually shown halfway through the series, he says he's new. The DVD order follows the original nonsensical order, unfortunately.)

It's slightly modified from one I found online. It makes sense with what information we're given of the general timeframe, and moves concept episodes like Living in Harmony and Girl Who Was Death farther apart, so we're not watching ridiculous costume fantasies two episodes in a row. I also think it makes sense to place Many Happy Returns near the end. (The ones in parantheses are the ones I think should be avoided altogether for quality reasons. The General is awful. Do Not Forsake Me is ridiculous and kinda fun, but ulitmately opens cans of worms that are best left unopened. It's Your Funeral is just not very good, despite having a good No. 2.)

I just started a rewatch, and I'm at Dance of the Dead now. It's just so good. Mary Morris in a Peter Pan costume = creepiest villain ever.

What really struck me was the spooky stilted oddness of the atmosphere. Something about the direction, acting, costumes and sets, so portentous and artificial, it's like the shows were obsolete before they were broadcast. And they're still relevant too.
Click to expand...

I agree 100 percent. I had the series lying around forever because I'd just read about it, and it didn't strike me as anything too interesting. Dystopias or prison movies rarely interest me, I've tried THX-1138, the film version of 1984 - twice - and I've tried reading Brave New World - they all bore me to tears, even though I actually really enjoy Huxley's short stories. Also, The Prisoner's tagline of "I am not a number! I am a free man!" isn't all that deep in of itself, to be honest, and the idea of a sci-fi prison movie didn't interest me in the slightest. So I thought meh.

But nothing prepared me for the portentous and artificial (great description) nature of the show. It looks absolutely stunning, way better than most British films from the same period (in full 35mm, with plenty of location shooting), and the fact that it changes mode, often suddenly, from high concept to escape thriller to high drama to swinging 60s style (with a soundtrack to match) to Shakespearean shouting matches makes sure that it's never boring. Also, Patrick MacGoohan is probably the most intense leading man ever.

This is one of my fav shows ever.  It's been probably 10 years since I've watched it, so I don't think I can answer any of the detailed questions here, but I will say that to me there's not a single "clunker" episode.  They all succeed to differing levels.

The finale, of course, is the most contentious one.  I've gone back and forth between hating it and thinking it's one of the best ever.

You really do need to watch this with the social context in mind though.  "The bomb" is still very much a threat.  The Cold War is kicking into top gear.  Patrick McGoohan had just finished starring as the famous spy in Danger Man/Secret Agent, so the intimation was that it was the same character whose show had just ended that was now abducted into this village.  It was really just a cultural onslaught.

The remake had a lot of potential and a promising start, but it kind of crapped out by the end.

I've been re-watching this awesome series with your viewing order @theslime. It's great but I think it could use a little trimming here and there. I feel that some episodes have been padded out to reach the 50min mark. "Free for All" could use a little trimming in general and "Checkmate", while a great episode, should have the "love"-subplot removed, it goes nowhere and actually hurts the pace.
You must log in or register to reply here.
Share:
Facebook Twitter Reddit Pinterest Tumblr WhatsApp Email Share Link
Top Bottom