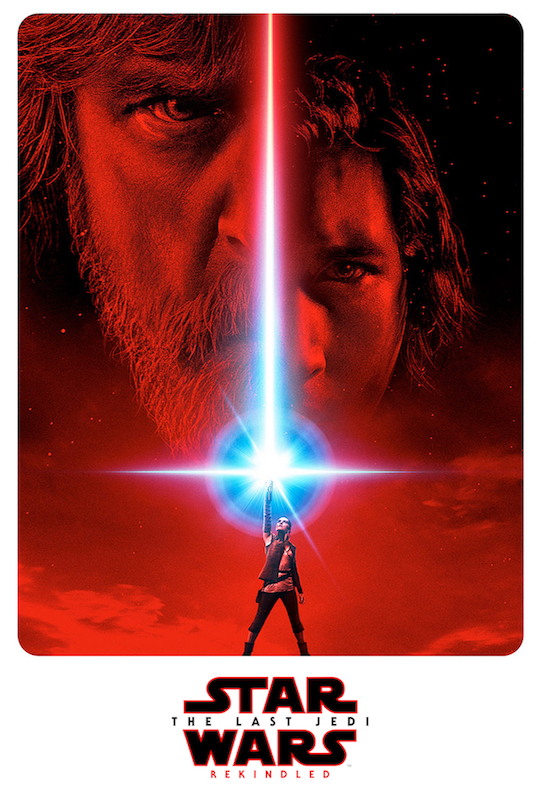 I am a first-time fan editor who just completed an edit of The Last Jedi, with the help of users at OriginalTrilogy.com. I am starting this thread in order to spread awareness, in hopes of having the film registered with the IFDB.

For The Last Jedi, I had a reaction similar to Hal 9000, and his Legendary edit is the most in line with what I want to see. It smoothly trimmed Canto Bight and was conservative with regards to cutting humor, along with a host of changes and tweaks I had never even considered that drastically improve the pacing.

However, for me there are a few scenes I still have trouble watching, scenes that take me out of the movie every time: Leia’s spacewalk, Finn vs. Phasma, BB8 piloting the imperial walker, and Rose’s “rescue” of Finn. I don’t want to be a curmudgeon, and I realize that Star Wars is lighthearted fun, but these scenes broke my suspension of disbelief and disengaged me from the story. So, with permission, I have used Hal’s edit as a base, and made a few additional changes, outlined below.

There are two versions, one with the Palpatine additions, and a “NoPalp” version for those who don’t want to TROS tie-ins. The latest version with Palpatine is 4/20/20, and the latest “NoPalp” version is 04/05/20. The final runtime for each is 142 minutes (credits roll at 134). Please PM me for more info.

Please PM me for more info.

There are four sizes to choose from:

Since I’m building off of Hal 9000’s excellent Legendary edit, I felt it appropriate to include his special thanks to those who helped with his edit through feedback and work, as well as adding the names of those that helped with my own version.

I also must thank my wife for sitting with me through several viewings, making valuable suggestions (how to fix "Space Leia" to name one example), and being patient with me throughout!

I'd just like to chime in over here and say what a great edit this is - for anyone who liked Hal's Legendary edit but didn't think it went quite far enough in some areas, this is the edit you're looking for.

I particularly like the subtle music shift during the saber toss, the removal of Leia's spacewalk, and the way you handled Finn's suicide run and Rose getting shot down instead of crashing into Finn.

Fantastic work for your first edit!

Love what you have done with the removal Finn fighting Phasma and escape from the hanger scene. good stuff

Hopefully, I’ll get a response soon to my request for submission to the IFDB.

Hello, this is now available at 3 different sizes:

I was going to do a 2gb version, but I couldn't get the quality right for one of the first flyover shots on Ahch-To. If anyone has any favorite ffmpeg or other encoder settings, I'd be more than happy to try them!

I recently watched this and some of the edits and ideas are great - i love the way you managed to get Finn and Rose out of the hangar using the rotoscoped BB8 and deleted scene...BB8 in the scout walker in the original had me choking on my popcorn... but for me personally a lot still needs to be cut and trimmed into something truly watchable.

When you say you used Hal's edit as a base did you have permission to use his raw files or did you build your edit from scratch using some of his ideas?

Last Impressions said:
I recently watched this and some of the edits and ideas are great - i love the way you managed to get Finn and Rose out of the hangar using the rotoscoped BB8 and deleted scene...BB8 in the scout walker in the original had me choking on my popcorn... but for me personally a lot still needs to be cut and trimmed into something truly watchable.

When you say you used Hal's edit as a base did you have permission to use his raw files or did you build your edit from scratch using some of his ideas?
Click to expand...

Thanks so much for your feedback! I’m glad you enjoyed the new hanger scene. The Finn/Phasma fight always seemed to slow down the narrative to me, and the BB-8 walker moment was just too goofy.

That’s fair if you’d like more cut. This is still a generally conservative edit, especially when it comes to humor, and we’re not all going to see things the same way!

For the most part, I used the blu-Ray conformed to Hal’s edit, along with his lossless audio. For 2-3 shots where fx had been done for Hal’s (such as removing the caretakers and adding wipes), I used Hal’s blu-Ray quality release version. I also did a few small FX shots for Hal’s edit, so for those I used my After Effects prores renders. All of this was done with his permission first!

I'll watch this over the weekend and give you some notes if you like. Or just impressions. Whichever you prefer.

revstevens said:
I'll watch this over the weekend and give you some notes if you like. Or just impressions. Whichever you prefer.
Click to expand...

I'd be happy with whatever feedback you're able to give. I am always willing to hear criticism as it often helps me form my own opinions. Overall impressions are very nice, and some specific notes could be fun to talk about. I appreciate your time, though, so please don't feel pressured!

poppasketti said:
I'd be happy with whatever feedback you're able to give. I am always willing to hear criticism as it often helps me form my own opinions. Overall impressions are very nice, and some specific notes could be fun to talk about. I appreciate your time, though, so please don't feel pressured!
Click to expand...

Here you go! No pressure at all!

Side note: does my comment above show all the formatting code for anyone else? Or is it just me?

revstevens said:
Side note: does my comment above show all the formatting code for anyone else? Or is it just me?
Click to expand...

Hehe, yes it does! I can see through kind of well but if there’s a way to fix that it would be best! You could try the clear formatting button, although that might mess up your list?!

Thanks so much for your feedback, the detail is wonderful and I really appreciate it! I love your ideas (and musings!), but before that I want to make sure I understand the technical comments, because a good encode at blu-ray quality is essential for me. Could you tell me exactly how you were playing the video so I can duplicate your setup? I looked back at my encode and am not seeing the issues you mention, so I'm hoping to figure if there's an issue with my setup or my eyes!

Track 1 is the DTS track, and the DTS tracks for both the Official Blu-ray and Rekindled played out of sync for me on certain setups, particularly on Roku. Reading up on it, it is a known bug on Roku (or Plex, there's some debate about it). In VLC and blu-ray player, both DTS tracks played in sync for me.

First off, credit for the cutdown of Canto Bight must entirely go to Hal 9000 and his "Legendary" edit, which this edit is based on!

As for the pixelation and other artifacts, I am actually not seeing them. There is a very slight flicker of the stars during the opening title crawl on the official blu-ray, and it looks to same to me.

Here's a few screen grabs, which I know may not show everything, but I tried to pick the most likely frames for compression to hurt. If it would help, I can also post a screenshot comparison between Rekindled and the official blu-ray. 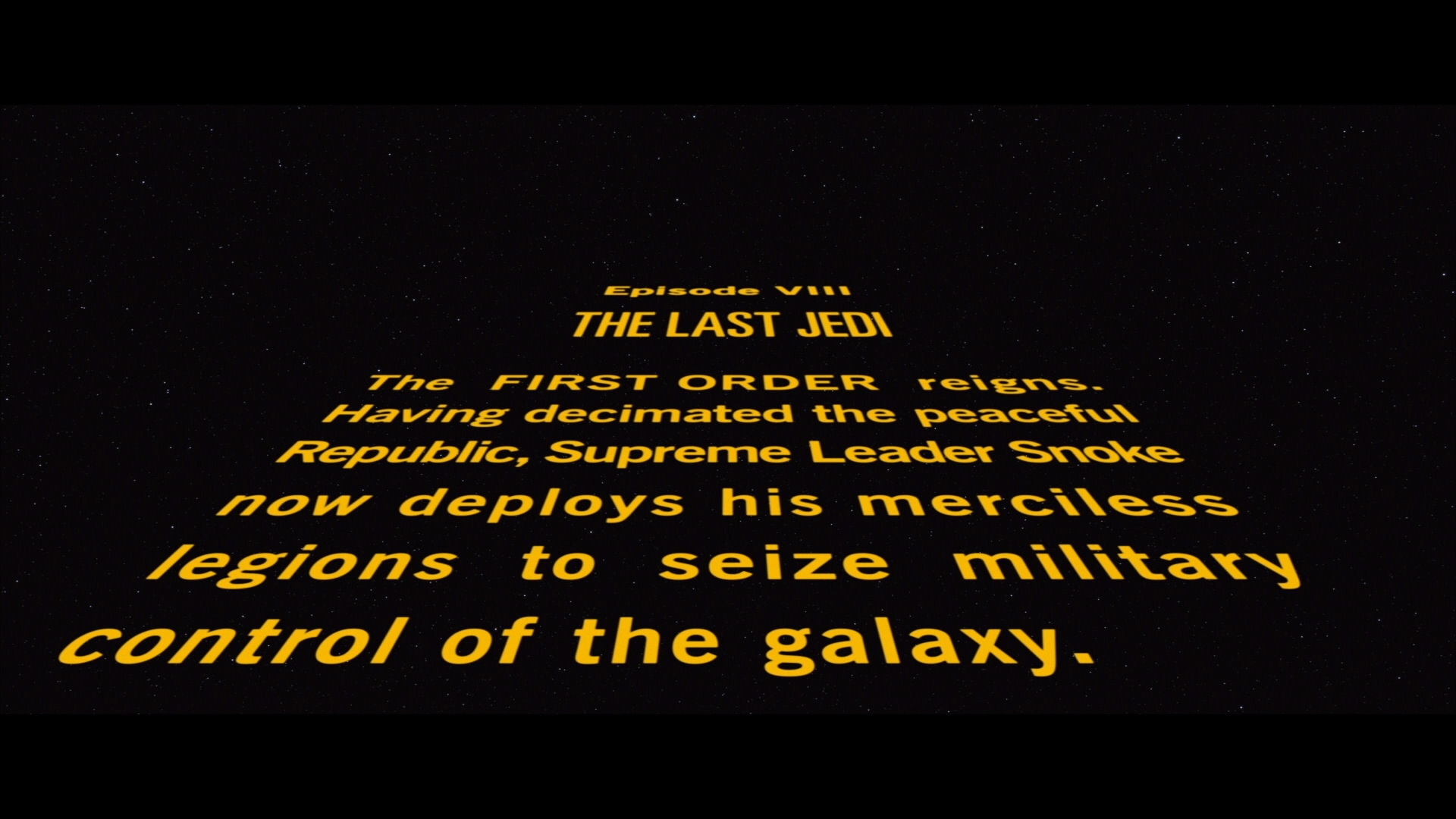 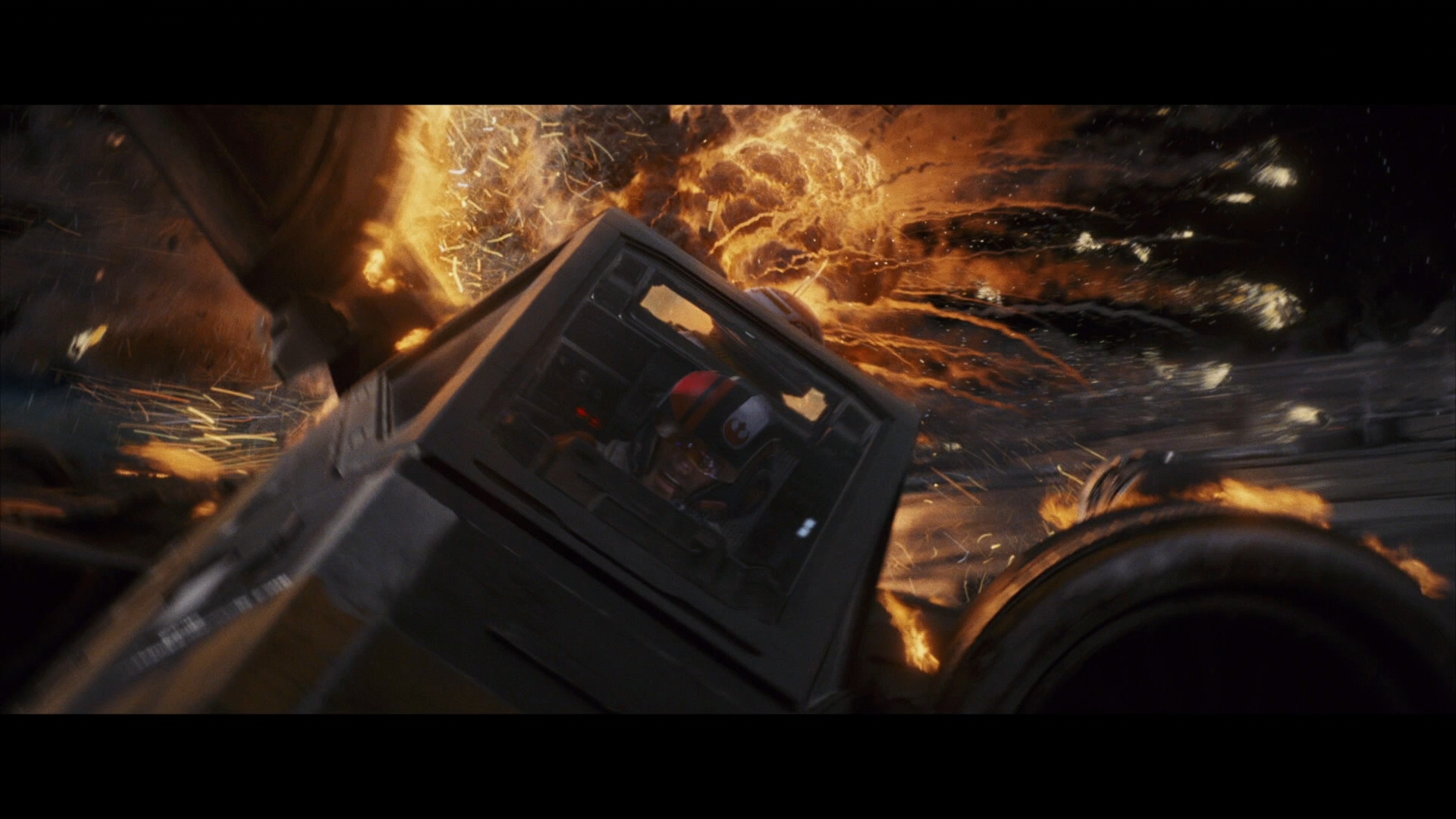 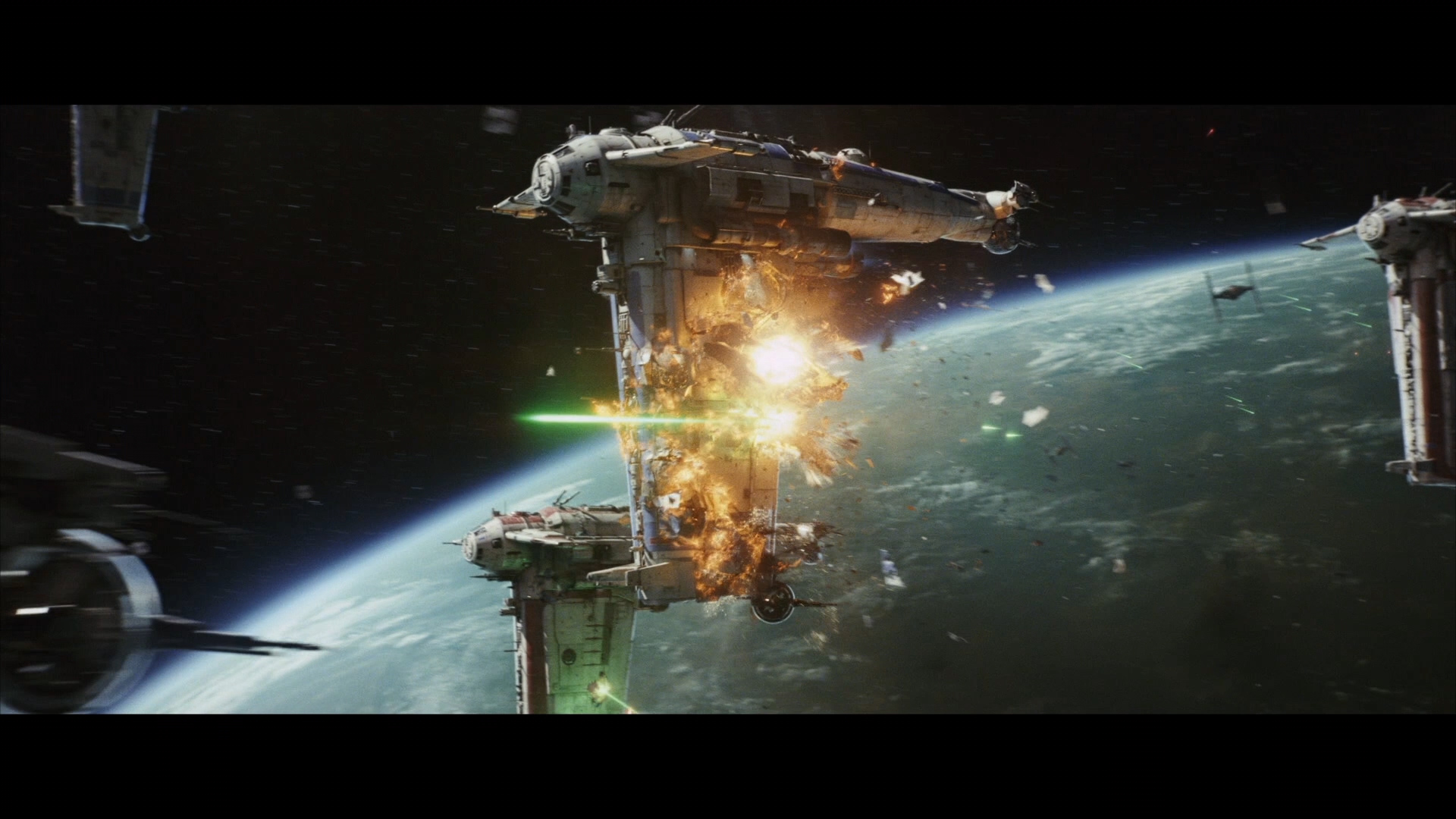 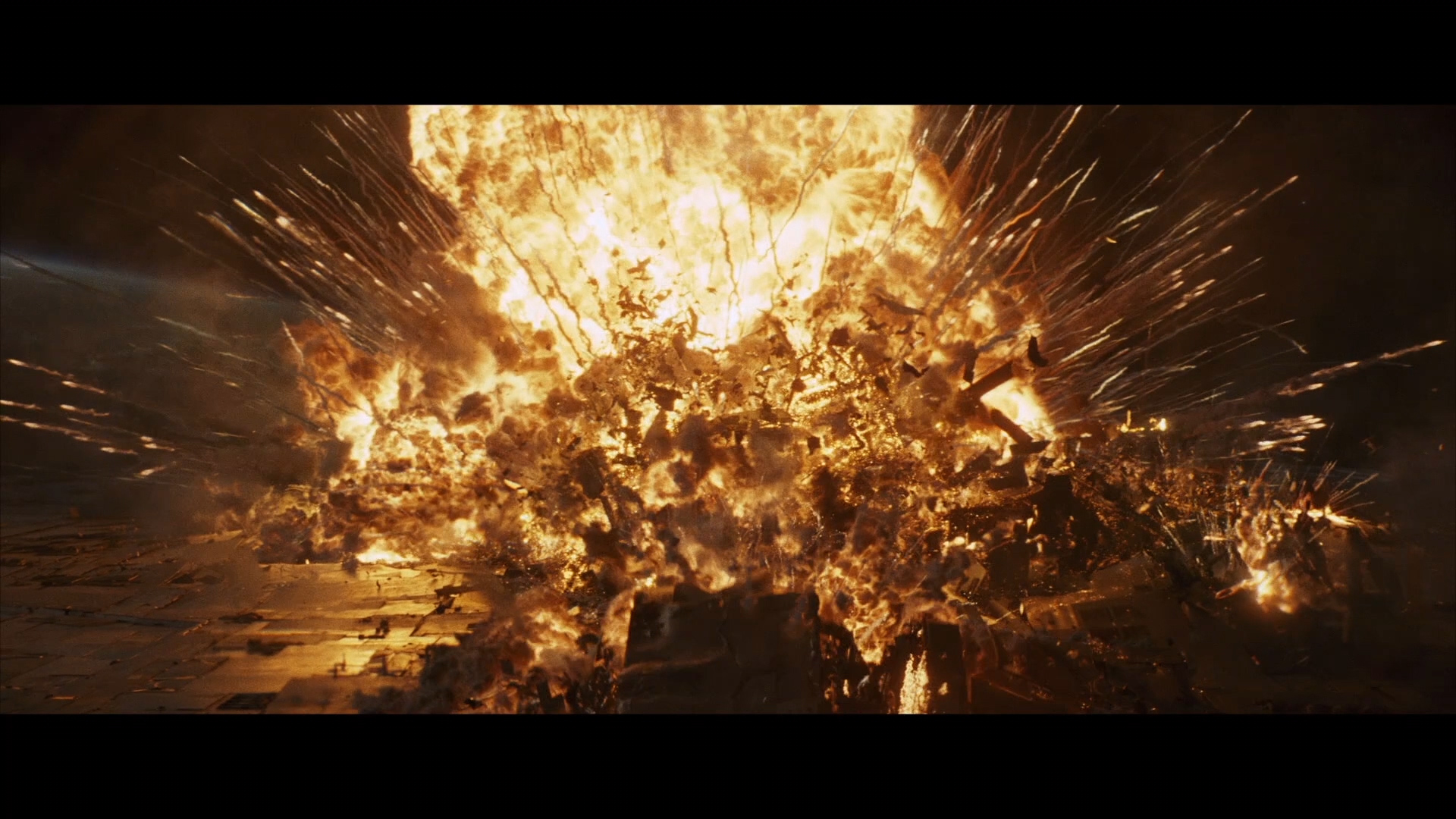 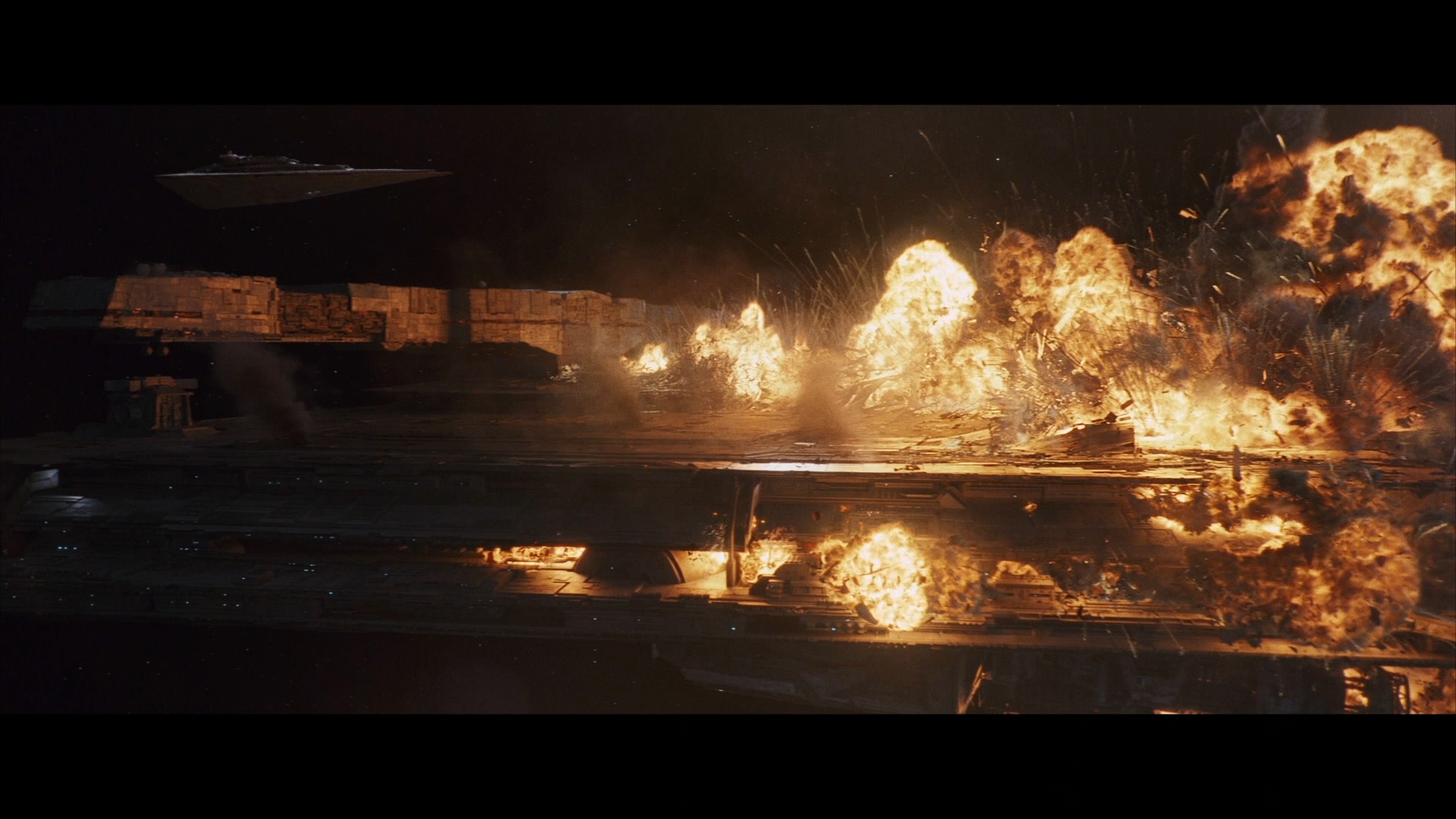 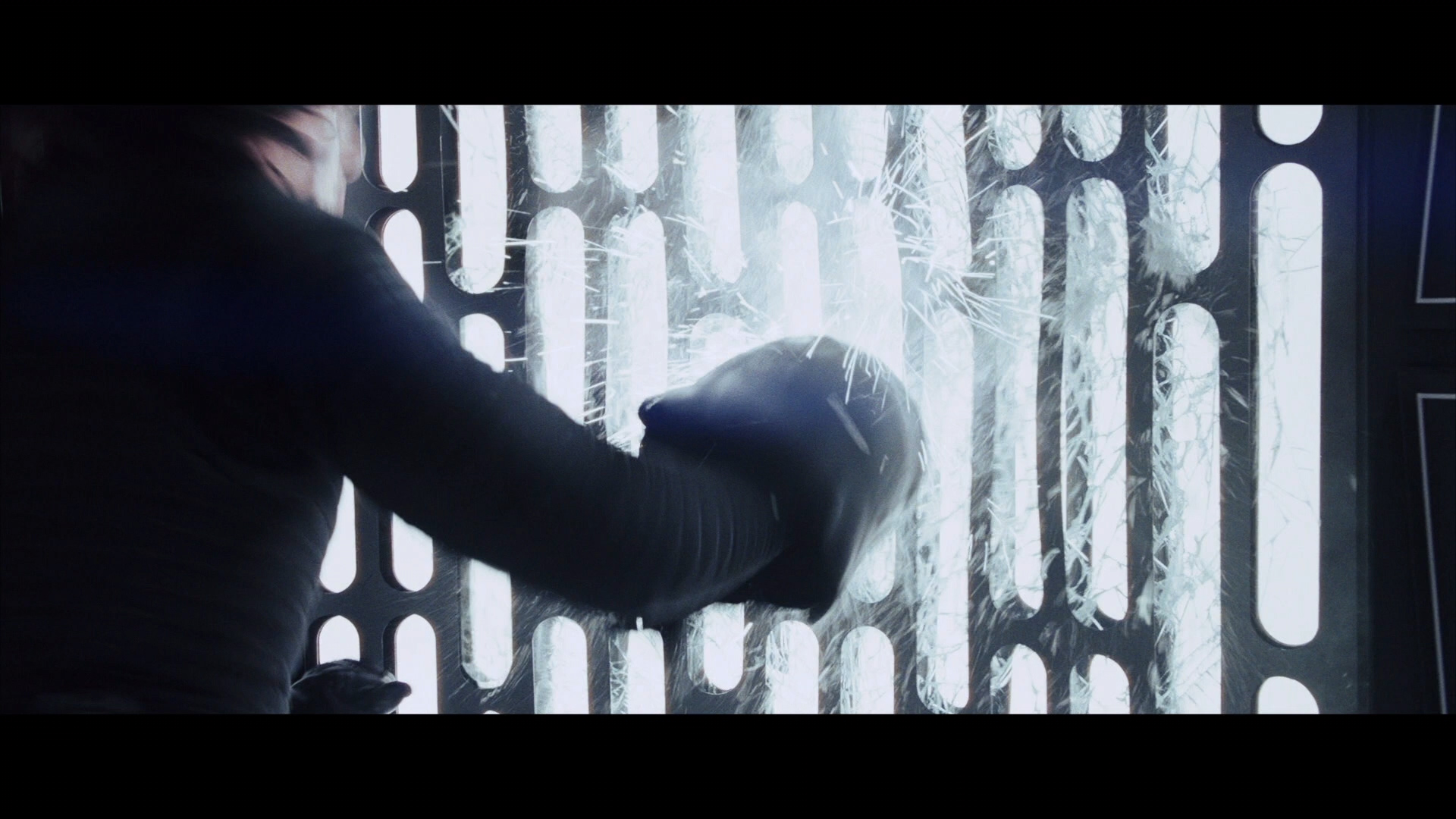 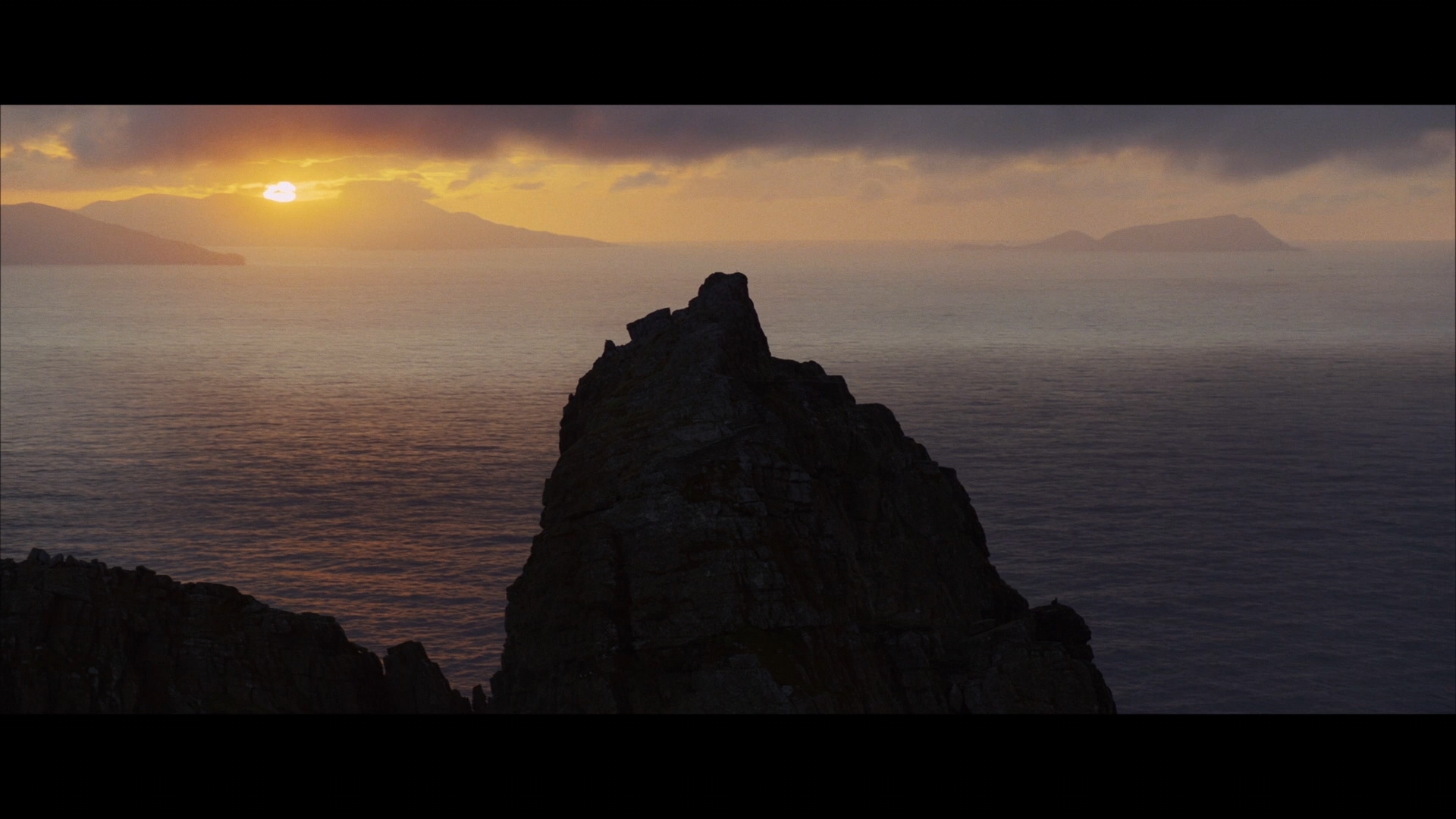 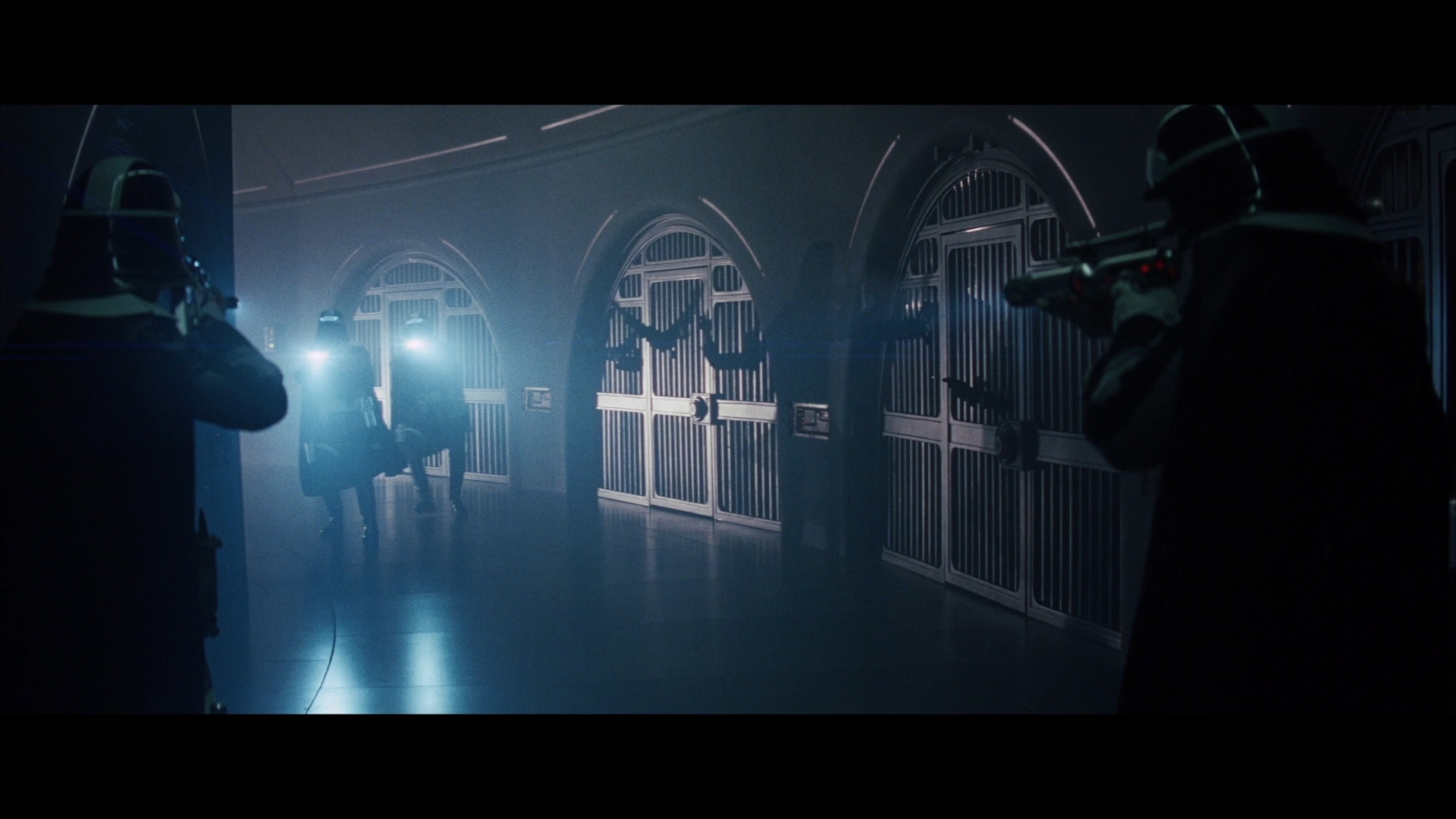 I'm on a 55" LG OLED HD (not 4k) TV, watching straight from a USB stick. The oled part may be what is making the artifacts more noticeable for me.

Audio sync. Easily remedied with the delay function on my surround bar. It just seemed odd that one was in sync and the other wasn't.

I'll check my official Blu Ray for the star flicker and some of the artifacting when I get home. They may be on the original. To be fair, I am overly critical of that type of thing since I first noticed it on my TDK DVD. Now I see it everywhere. So, to some degree, you can flat out ignore me. But I do think there where some that should be looked at. I'll try and get you specific timecodes/frames. Or I'll just fix them myself and send you the stills to drop in your sequence. I need a break from removing all the damn wires in Highlander anyway.

FWIW, I noticed no sync issues with the DTS track when played directly from the USB port on my Samusng TV or from my KDLinks media player over HDMI. And the official Blu-Ray is kind of a shitty encode with rough compression artifacts all over, so that stuff is likely baked into the source.

Thanks so much for your QC help and verifying the DTS audio sync, Ash! It’s a tough one to test and I’m relatively new to it. It seems that some setups have issues with DTS sync in general, and it’s a hardware/software issue, not the encode.

As for compression, working with revstevens, I’ve identified a few areas where the encoding does come up a little bit short and some of the finer grain structure breaks down. This tends to happen in the shadows of high contrast scenes that have a lot of sharp detail (explosions in space battles, for example). Fortunately, I’ve gone back and identified the issue: these moments were using Hal’s encode directly instead of the blu-Ray encode conformed to Hal’s edit. I had only meant to do this for certain moments where Hal did FX work, but some larger chunks were left in by mistake. Consequently, there was an extra generation of compression from the source blu-Ray. Doing some testing I was able to recover the lost detail for these shots.

While I still am confident in the viewing quality of the current release, the desire for the best blu-ray quality compels me to make a new encode. I don’t think this would be a V2, as the content is the same, so I will put the render date in the file name as I have for all of the others.

Thank you, revstevens, for identifying the issue, so I can make the fix! And thank you again to everyone for their feedback, as, from the very beginning, it has helped make the edit better than it would have ever been on my own!

Yesterday, I made a new encode to help with areas where the compression was showing, and the results are a significant improvement!

Here's a frame compare (scaled 400%) with the before and after:
http://www.framecompare.com/image-compare/screenshotcomparison/01M1NNNU

And here's the problem frame: 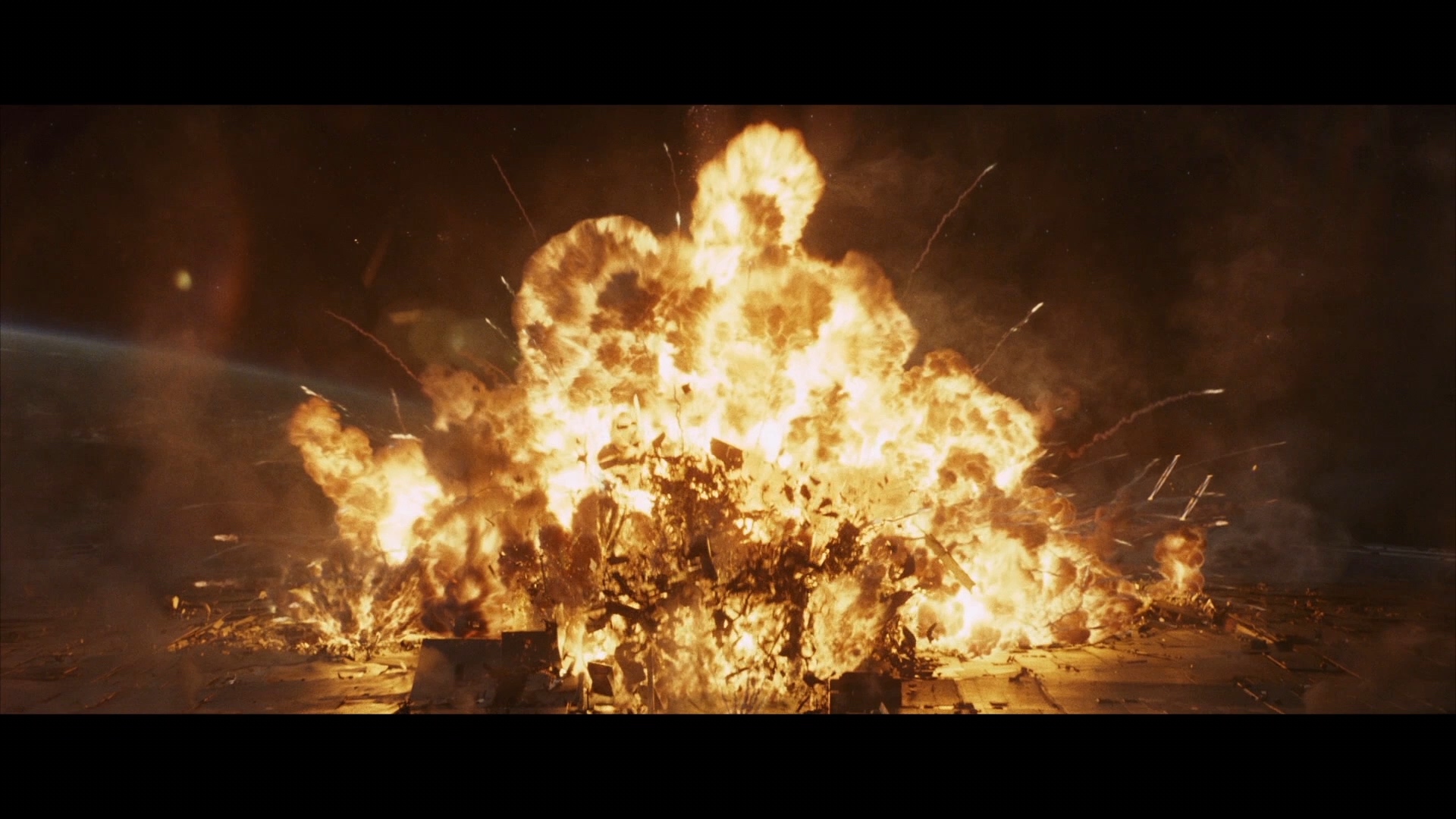 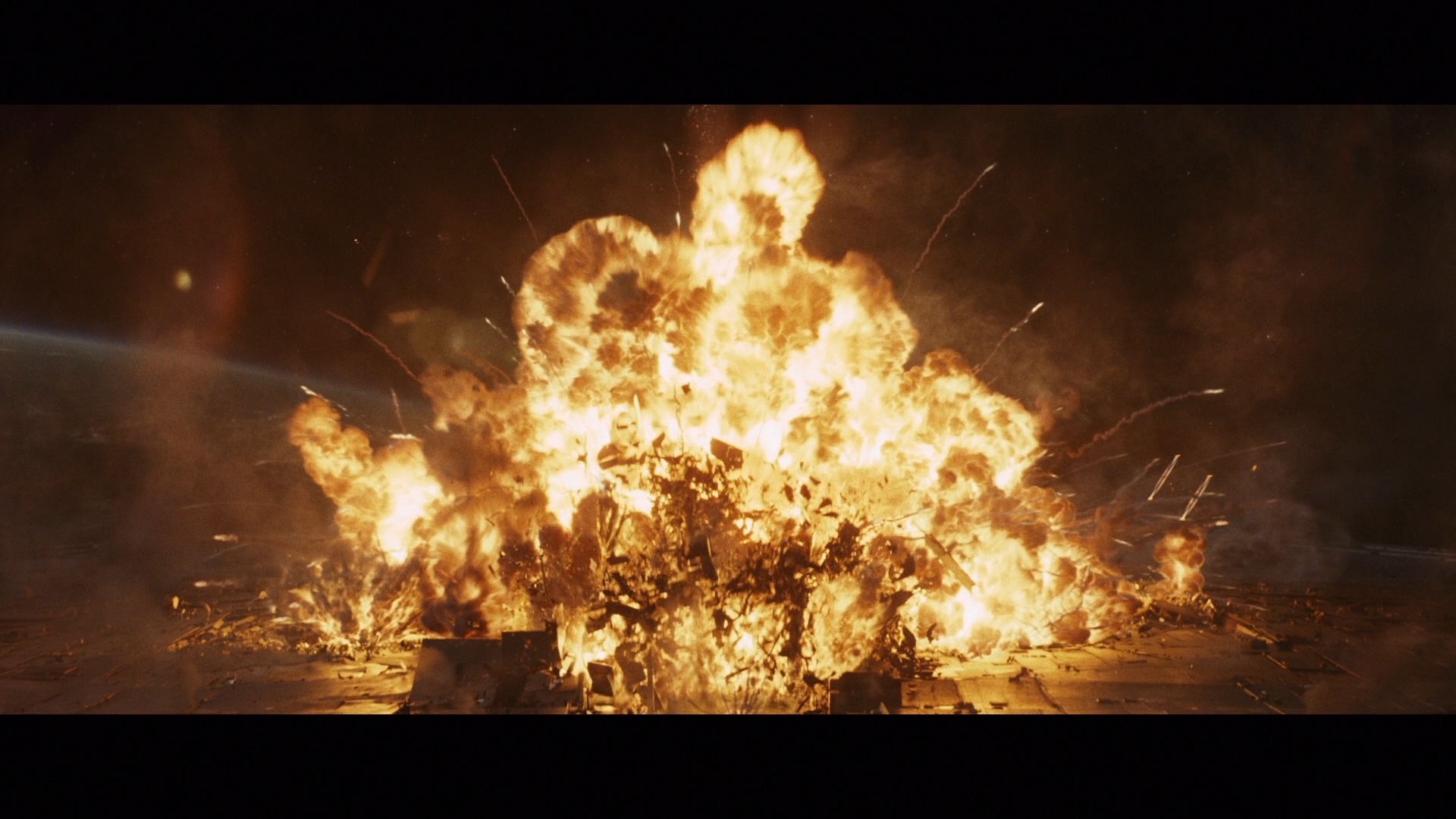 The new Blu-Ray quality encode has been posted and the medium and small should be posted by tonight.

Thank you, again, revstevens, for helping identify the issue, and I'm so happy to be able to offer an improved quality of the film!