"He always said that she just sort of happened." "The smart thing would've been to get out and let her happen to somebody else."

Taking a cue from @The Scribbling Man 's B+ editions and @Wakeupkeo 's black-and-white rendering of Dick Tracy, I'm turning The Hot Spot (1990) into a shorter black-and-white version that feels like a '50s film noir instead of a '90s homage to those films. To imagine that this film was made when the book was written in 1953.

This is my first time turning a color video into B&W. I compared the look of several original 1950s B&W films and I've found a black-and-white balance that I like, after lots of fine-tuning and watching test clips on laptop screen, desktop, and projector screen to evaluate the grayscale balance and brightness on different screens.

Film critic Roger Ebert summarized the film very nicely in 1990:
"A guy comes in from out of town. He doesn't have a past - at least not one he wants to talk about. He gets a job in a used-car lot. It's one of those typical small towns from the movies of the 1940s and 1950s, the kind of backwater where the other guy on the job is a nerd, and the boss is a blowhard with a bum ticker - but the boss' wife is this great broad with blond hair and big eyelashes and when she gets up in the morning she puts on her negligee just when the other women in town are taking theirs off. Oh, and the bookkeeper at work is this innocent young girl who is intimidated, for mysterious reasons, by the vicious creep who lives in a shack outside of town." 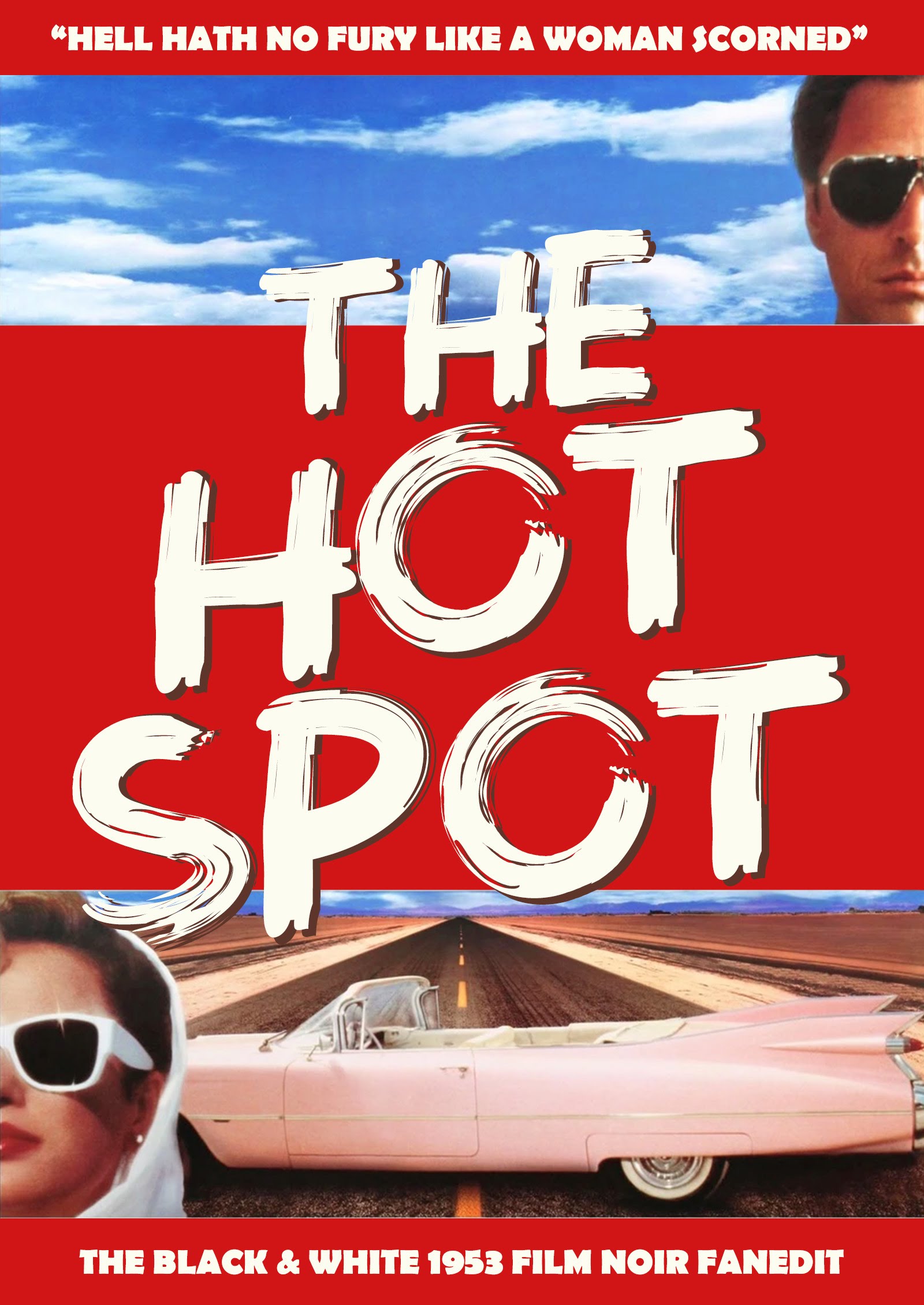 And the dvd cover in the style of a pulp novel printed after the film came out: 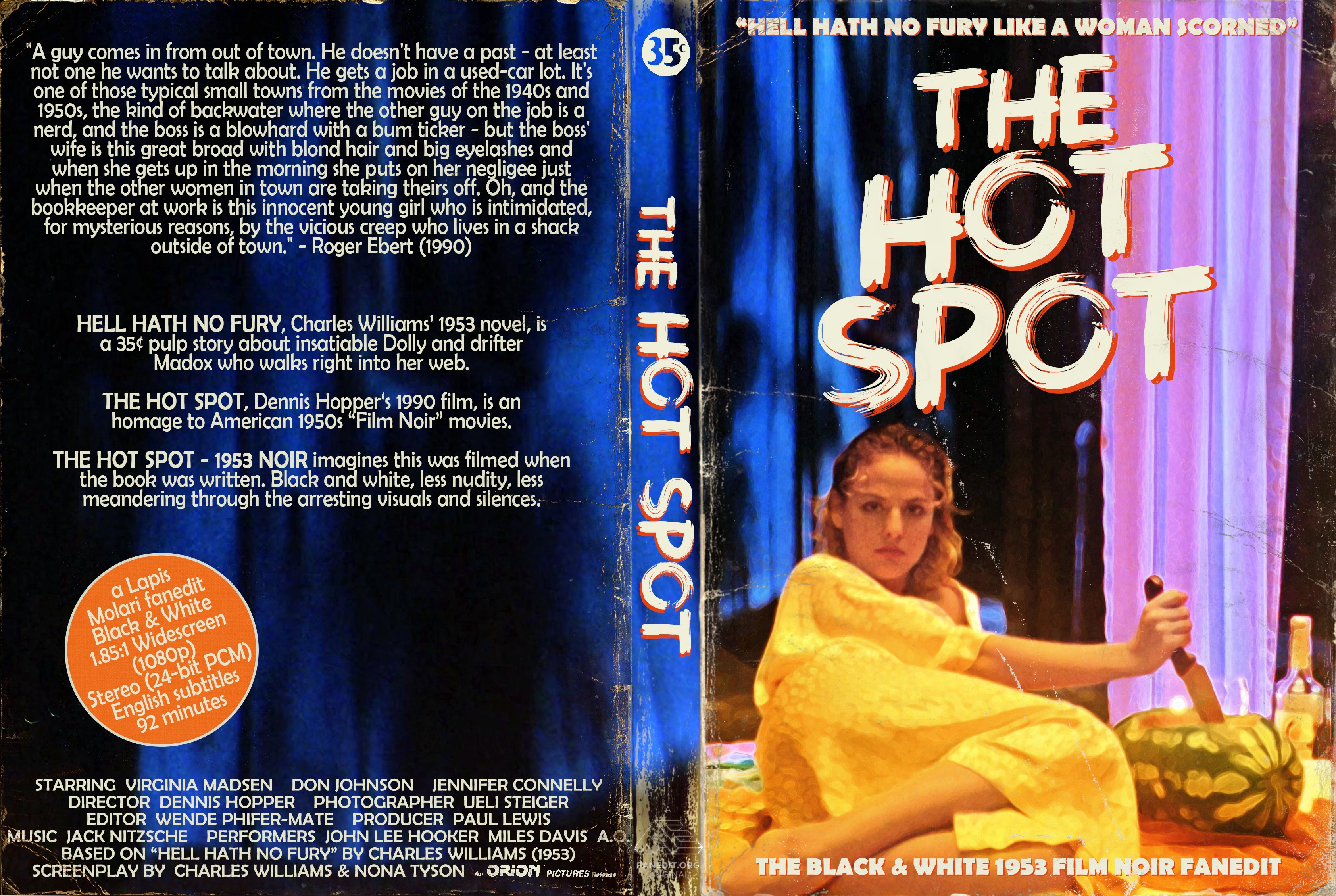 The transformation from Dennis Hopper's Neo-Noir into an actual 1950s film is only in spirit, not literal, because some 1980s objects cannot be cut from the story (e.g. Sutton's Ford Taurus).

The soundtrack is gorgeous! John Lee Hooker, Miles Davis, and others create a mesmerizing mood. The audio track is in uncompressed 24-bit PCM. Enjoy! Also, listen for the crackling of the fire; the sound engineer on this film is outstanding.

@Last Impressions, then maybe this edit won't be for you. Mrs Connelly looks stunning in black-and-white but her screentime is reduced here.

E.g. The plotline of her character sunbathing with her sister is removed. It bothered me that the suggested lesbian relation was shocking and "worthy" of blackmail, while the fact this would have meant incest between the sisters is entirely ignored. That whole scene felt like a poorly thought-through excuse to show the sisters topless. I have no problem with nudity in the movie (it would be weird to make this fanedit if I did), but it must add to the story, not distract from it.
Last edited: Jan 26, 2022

Last Impressions said:
but i want to see my wife Jennifer Connolly in all her full colour glory
Click to expand...

Your wife?
I wonder what Paul Bettany would respond to this?

But I’m looking forward to see this Edit nevertheless

Dawnrazor said:
Your wife?
I wonder what Paul Bettany would respond to this?

But I’m looking forward to see this Edit nevertheless

Polyamory is a thing.

Audacity can be a wonderful tool. When Madox first enters the local strip joint, the 1981 song "The Stroke" played. It killed the 1950s mood so I replaced it with "Twist and Shout". I think I got the loud-music-in-a-cavernous-space convincing, admittedly after lots of trial and error.

Works pretty well IMO. The fact that it is from 1962 is irrelevant since it's not really a period piece. If anything, the choice is a bit too... British? It feels like an American piece would fit the mood better.

I think Twist and Shout is a great choice and fits the scene really well.
The Black/white degrade looks stunning!

@Dwight Fry , thank you for previewing and for your feedback. I've made that one troublesome audio-transition as smooth as the available material allows. I tried the 5.1 track and checked the foreign language tracks, but ultimately the stereo track had the cleanest audio.

Here's the trailer. I'm still not satisfied with my trailer-making skills. I'll keep working at that.