The Hobbit: The Battle of the Five Edits 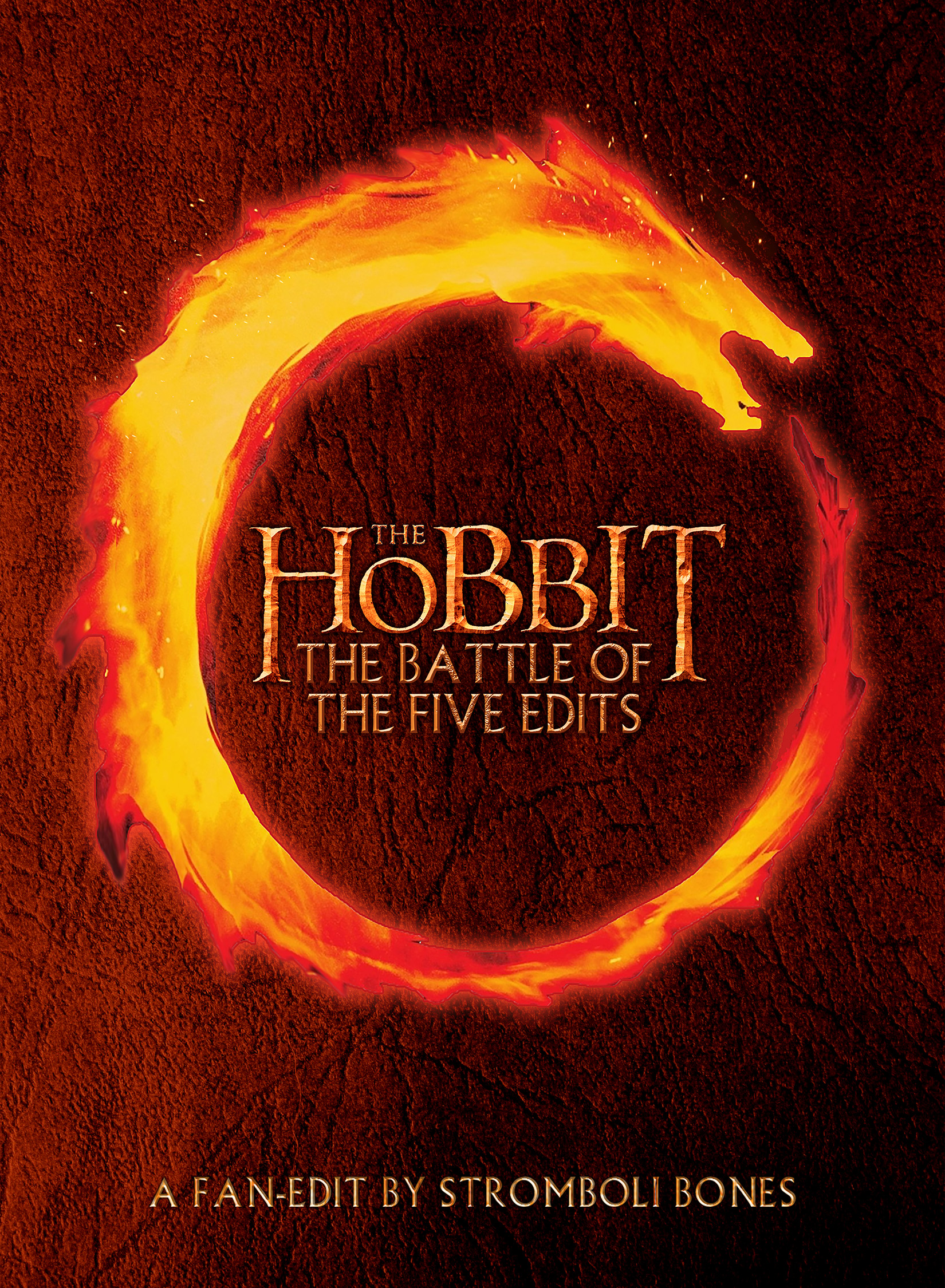 
Anyone who browses this site regularly has probably seen the overabundance of Hobbit edits, and it is that reason specifically that I believe my edit deserves your attention! As the name suggests, my edit is a culmination of all the good things that these other editors have done to Peter Jackson’s work, along with many of my own additions. I would like to thank DonKamillo, Dustin Lee, Adam Dens, L8wrtr, Spence, Wraith and M4 for the wonderful work they did, and for being the main sources of inspiration for this version of the Hobbit. Without their edits, mine would not have been possible.

I would also like to thank my wife for all her support in this endeavor. We got married on Frodo and Bilbo's birthday in 2020, and then exactly one week later: I rented out an auditorium at my local movie theater and showed this version to 25 of my friends! ( Her idea!) I received some critiques, and tweaked accordingly. At this point I feel confident stating that my edit is 100% done. However, despite having a successful beta, many games receive patches after launch day, and I am prepared to do the same. I welcome any and all critiques!

With that, I would like to present The Hobbit: The Battle of the Five Edits to the world.

For anyone who is interested, I invite you to PM me and I will send a link your way!

BoFE is split into 5 episodes, clocking a total runtime of roughly 5 hours and a collective file size of 8.83 gigs (1 hour and 1.5 gigs each)


I decided to include a Hobbit Edit checklist that I found on Billy Batson's page that he says was provided by @herowoac
I covered most of these in my cutlist further below so this may seem a bit redundant, but I figured I'd include it anyway as a TL;DR cutlist at the very bottom!


Episode 2 - Riddles in the Dark

Episode 5 - There and Back Again

Here's some art my friend Jasper Rex did, too!

and here's a clip of Smaug escaping the mountain and starting to trash Laketown!

Faneditor(s): Stromboli Bones
Name of edit: The Hobbit: The Battle of the Five Edits
Movies Included: AUJ, DOS, & BOFTA, both theatrical editions, extended editions, and soundtracks.
Total Length: 300 minutes/5 one hour episodes
Intended Tone: To create an edit that combines the best/unique aspects of other edits into one.
High Fells Plot: Deleted
White Council Plot: Deleted, Galadriel has an extended cameo
White Orc Plot: 90% deleted, he is the leader of the army at the end
Army from the North plot: They show up at the end.
Love Triangle Plot: Deleted.
Radagast Inclusion: No.
Legolas Inclusion: Abbreviated. He's in Mirkwood, and shows up late in the Battle of Five Armies.
Tauriel Inclusion: Deleted, for the most part. She appears in a couple shots.
Alfrid/Master Inclusion: Severely Abbreviated.
Extended Edition Use: Yes.
Use of Deleted Scenes: Gandalf's Eulogy (audio)

SPECIFIC SCENES (yes/no/partial/more info)
Prologue/Flashbacks: No.
Chip the Glasses: Yes
Battle for Moria Flashback: No.
Radagast in Mirkwood: No.
Troll Battle: Yes.
Radagast's Rabbit Chase: No.
White Council in Rivendell: No.
Stone Giants: No.
Gollum scene modified: Not really.
Fifteen Birds in Five Fir Trees: Orcs removed (mostly)
DoS Gandalf/Thorin Prologue: No.
Beorn: Yes + Extended
Gandalf in Dol Goldur: No.
Bilbo fights a bug for the ring: No. Removed most large Ring/Sauron scenes
Tauriel/Kili in prison: No.
Barrel Chase: Yes, but trimmed down
Dwarves in Laketown: Partial
Dwarfs coming out of a Toilet: No
Dwarves Left Behind in Laketown: No
Orcs & Elves in Laketown: No
Dwarves Give Up at Erebor: No
Dwarves Combat Smaug: No
Black Arrow/Bard's Son & Smaug: No
White Council battles Nazgul: No
Thorin's Dragon Sickness: Yes
Battle of Five Armies - Restructured
The Master discusses class warfare: No
Alfrid wears a dress: No.
Thorin/Azog combat: Yes, but heavily trimmed: No breakout from the ice
Last edited: Nov 6, 2021

I am looking for someone to make some artwork for me for my Hobbit edit, I apologize if this is not the write place to request this. Any help and/or advice is welcome!

You are absolutely correct. There is a plethora of Hobbit edits out there. I have watched several of The Two Film Structures, all of which were excellent in their own right, most of them redefining the franchise for me. All of the edits that you borrow from are top notch. You may want to take a look at Wraith and Dr. Fontaine's two film structures, they are in the same league, with some unique ideas, as well. All of the One Film Structures you borrow from were also definitive in their own right. Strangely, you don't mention the three three film structures that come to mind. TM2YC, Q2 or Kerr. All of which are incredible. I just got to watch Q2's versions. Hell Yeah!

It's intriguing to consider an episodic format for The Hobbit, it brings to mind Kerr's six-part book edit of Lord of The Rings (though not the same intent).

I like that you own your influences and freely admit to borrowing from their edits while adding some of your own ideas.

I am excited to see where this goes. Good luck with your first edit and thanks for sharing your art with us!

I actually just watched Wraith's last week, currently working on watching the other big 3! Had a hard time finding them in the past. Gonna end up changing it to the battle of 9 Edits I can feel it. Lmao

I can make it even more challenging...SamSpider3 had an excellent two film structure, Belgarath did, as well. Rangerkris did a couple single film edits as did Masirimso17. There is menbailee, The Tolkien Edit, The Bilbo Edit, The Little Hobbit, Fenekk Cantel's two hour edit....how many is that?

Check out the others. Oh...and I think Father Merrin...

Have you seen M4's Hobbit Book Edit? I consider it the best one so far.

hbenthow said:
Have you seen M4's Hobbit Book Edit? I consider it the best one so far.
Click to expand...

I have. I believe it is very good, among the best.

hbenthow said:
Have you seen M4's Hobbit Book Edit? I consider it the best one so far.
Click to expand...

Yeah I am now doing some reworks of mine to include some of his stuff!

Maple Films still holds the crown for me personally.

Stromboli Bones said:
Yeah I am now doing some reworks of mine to include some of his stuff!.
Click to expand...

Is this not completed? Submitted edits should be complete before a review.

I may be mistaken but I believe in the second paragraph, you say this edit is 100% complete. Are you actively reworking them or is that just an idea? I'm confused. I was going to watch them tonight but am curious.

It's done, it's been done since November when I made this post. I'm just toying with some different things here and there. But I'm satisfied and consider it finished.

DigModiFicaTion said:
Is this not completed? Submitted edits should be complete before a review.
Click to expand...

It's done, it's been done since November when I made this post. I'm just toying with some different things here and there. But I'm satisfied and consider it finished. Sorry for the double post here

DigModiFicaTion said:
Is this not completed? Submitted edits should be complete before a review.
Click to expand...

Thanks for any movement you cause my edit to have DigModiFicaTion! I appreciate the attention!

Stromboli Bones said:
Yeah I am now doing some reworks of mine to include some of his stuff!

Maple Films still holds the crown for me personally.
Click to expand...

Nice, which parts were you testing? Feel free to use any of the VFX but please give credit if you do. I'm also a little curious as to what makes the Maple edit seen as the perfect edit - while it's definitely great, I thought some of the technical quality could be improved at times and if the goal was to stick to the spirit of the book, it left a bit to be desired - Smaug scene in particular.

M4_ said:
Nice, which parts were you testing? Feel free to use any of the VFX but please give credit if you do.
Click to expand...

Absolutely I'm making sure to give credit where credit is due! I REALLY liked how you had Thorin's scars removed, I did my own thing with that scene but it's always been a complication, naturally. And then your recolor of Smaug as he busts out was better than Maple's.

Cool! I used to always pretend Thorin just cut his face on the tree lol - but no more! Although, you'll have to make the scene start at him looking at the mountain so the whole first half has to be cut with the hug moment if you do wish to use the available VFX shots.

I think both are equally brilliant for different reasons. They each have their facets of brilliance. There are so many excellent Hobbit edits out there, it would be easier to say which ones weren't as good as the rest. I am really liking the Q2 edits because they are only lightly trimmed here and there to limit some of the more ridiculous aspects while retaining the original intent. I wasn't one of those people who absolutely didn't like the Hobbit movies when they came out, I did see room for improvement. I remember sitting through the first one thinking that I couldn't wait to see what a good faneditor would do with it. As each movie was released, I felt that sentiment exponentially.
You must log in or register to reply here.
Share:
Facebook Twitter Reddit Pinterest Tumblr WhatsApp Email Share Link
Top Bottom