The Godfather Trilogy: Extended Editions in HD by hal_over_9000

I can't find it there anymore.
Click to expand...

Apologies if I've posted this in the wrong folder, I've tried to download the programs I need to had to get these files but my Provider is blocking them as malicious content. Can anyone provide any help as I would really love to watch these. TIA
J

Which of the Godfather laserdiscs contain the deleted footage that was used for this edit?

Hello dean. These types of questions are best served via PM to staff. If you are unsure of what should/can be posted where, guidelines can be found here. Thanks!

Besides not being in Chronological order and excluding Part III, which scenes from modernknife's Chronological Epic are not in the Extended Editions?
S

@"steviec0411" yes you are breaking the rules and I've deleted your post.  Link requests are not allowed in project threads.  Please review the rules again and PM a staff member if you still have questions.
S

TVs Frink said:
@"steviec0411" yes you are breaking the rules and I've deleted your post.  Link requests are not allowed in project threads.  Please review the rules again and PM a staff member if you still have questions.
Click to expand...

Sorry my friend - I thought it would've been okay, as I was only referring/linking to a thread elsewhere on the forum.  I'll know not to do this in future.

With the new material from Coda: The Death of Michael Corleone, is there a chance for a Godfather Part III: Extended Edition? 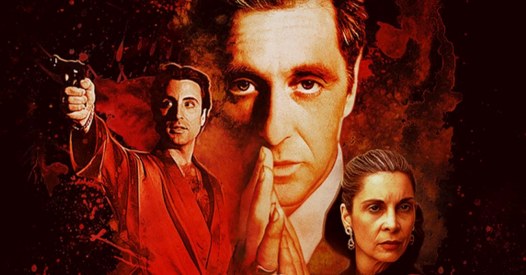 ArtofLife said:
With the new material from Coda: The Death of Michael Corleone, is there a chance for a Godfather Part III: Extended Edition?
Click to expand...

I believe @Wraith has already done this.

Heavisyde said:
I believe @Wraith has already done this.

The amount of new material in Coda is negligible. It is a handfull of shots, less than 30 sec,s in total...pitiful money grabbing exercise IMHO.

I did full frame by frame, scene for scene comparison of Part 3 and Coda. My La Fine edit is as close as you can get to an extended part 3, and I added a new scene extension using dialogue from deleted material on the DVD and repurposed HD images to incorporate it. I suspect that there is not much extra material to use unless its more close ups of Mary making strange twisted smirks to camera in lieu of acting....

As far as extending the other parts any further, unless a copy of A and B rolls in good condition is located, given how damaged the original negatives were when the Copolla restoration was made, all that is left is a VHS of the assembly cut with a HUGE timestamp in the center of the screen, and that is unlikely to see the light of day unless it is incorporated into a documentary. The issue with that I think is that admitting that those gems of Vito growing his Empire (De Niro) and Michael finding his feet, could diminish peoples perception of these movies. There will not be a "Donner Cut" so to speak of The Godfather. Even the assembled negative dupe that was made to generate the chorological versions for TV and VHS release is in such poor condition, that it may now all be lost to vinegar syndrome.

(now, where is that original cut of The Magnificent Ambersons)
ps I'm convinced this will turn up one day in a mislabeled can in a French or South American archive (before I die with any chance).
Last edited: Jul 8, 2021

Wraith said:
unless its more close ups of Mary making strange twisted smirks to camera in lieu of acting....
Click to expand...

Just for you Heavisyde...
Wait for the punchline.

Wraith said:
Just for you Heavisyde...
Wait for the punchline.

"sofia, we're filming, spit that gum out of your mouth!"
"no dad it's fine, it adds character"

Heavisyde said:
"sofia, we're filming, spit that gum out of your mouth!"
"no dad it's fine, it adds character"
Click to expand...

I have watched the edits. Really amazing work, but there are some small details that I would like to ask about.

1.) One scene that still has the watermark. It is the scene where Michael sits in the garden before going to see Clemenza in the kitchen. Is this scene not available without watermark?

1.) The low quality scene where Michael asks Sonny Junior how he is doing in footbal is really distracting. Is this scene still not available in higher quality?

2.) The scene where Michael talks to his son in the bed is available in longer version. In Saga the scene was positioned before the assassination attempt at Michael and it included his son saying that he draw a picture and Michael replying that he will look at the picture before he goes to sleep. This dialogue was cut in Theatrical version because Michael had already seen the picture. Was this a deliberate choice since you did not wish to rearrange the scene order?

Are there any deleted scenes that are still missing from these edits?