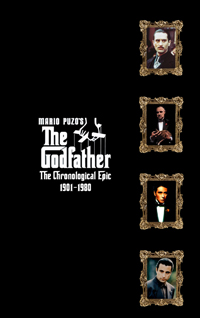 Clocking in at 9 hrs and 43 minutes, The Chronological Edit of Francis Ford Coppola's classic films has finally been restored in Widescreen 16x9 DVD's.

In 1977, while trying to secure funds for APOCALYPSE NOW, Francis Ford Coppola convinced the NBC TV Network to run a new version of THE GODFATHER and THE GODFATHER PART II edited together into a chronological order called THE GODFATHER SAGA - A NOVEL FOR TELEVISION (434 minutes). To expand the length over four nights, Coppola added over 75 minutes of new scenes into the film, including several outtakes used for additional opening/ending title sequences. Due to television restrictions at the time, many scenes of violence and language were censored.

A shorter version of THE GODFATHER SAGA (386 minutes) was released on VHS tape in 1982. After the release of THE GODFATHER PART III, Coppola and editors Barry Malkin and Walter Murch constructed a new chronological edit called THE GODFATHER TRILOGY 1901-1980 (583 minutes). This version was released to VHS and LaserDisc in 1992 and is out-of-print. While many new scenes appeared in this version, several from the TV SAGA were still not included.

Your intention for this fanedit:
To re-create The Godfather Chronological Saga using all available footage with the Widescreen Restoration Versions + Deleted Scenes + LaserDisc.

Why is this a FanEdit?
This Chronological Epic remains a "fanedit" due to the addition of Deleted Scenes not in the 1992 LaserDisc cut, new title cards and date title cards between the films, the inclusion of the Alternate Opening for Godfather Part III and a new Alternate Ending Montage.

This is intended to be longest and most complete chronological version of the Saga.


Time needed for the edition: 3 days


Additional Comments:
--A BIG THANKS to FanFiltration and the remarkable 5 DVD LaserDisc rip with Deleted Scenes added. After watching that version, I decided to tackle a Widescreen Restored Version, since the quality of the recent DVD set is superior to the LaserDisc versions.

--Since all Deleted Scenes are presented in FULL FRAME 1.33, they have been sized to match the Widescreen 1.85 aspect ratio, adding black bars to the sides of the picture.

--To keep from abruptly cutting from Part I to Part II to Part III, a musical interlude against a black screen was added between each film, with a Title Card presenting each new chapter.

--In the TV SAGA version, Coppola incorporated deleted scenes shot for THE GODFATHER of Kay praying for Michael and lighting candles in church. However, instead of placing the scene after the evens of the first film (as in the novel, where the scene takes place), Coppola instead placed the scene at the end of PART II, running the end credits over the scene. Some Godfather fans had issues with Kay praying for Michael after the events in PART II, with the footage clearly of a younger Kay. In order to maintain the chronological edit of events, this scene has be re-placed at the end of PART I, after a short music interlude over black screen.

--Since this edit is intended to be a chronological edit, the Alternate Opening Sequence for Godfather Part III was used. Coppola had intended to open the film on the business deal with Michael and the Archbishop (notice the same zoom out shot used from Part I), but later was convinced by editor Walter Murch to open the film on family instead of business. The scene was moved to 30 minutes later in the film. By moving the scene back to the beginning, the scenes that follow with the Archbishop giving Michael the award and the behavior at the party celebrations play very differently.

--About the new Alternate Ending Montage: At the end of Part III, we see a flashback montage of Michael dancing with the 3 women in his life, set to the music of "Cavalleria Rusticana" (also famous from "Raging Bull"). For Part III as a stand-alone film, this was fine, but it also seemed like a choice made out of not wanting to pay actors to re-use their images in Part III (Brando, DeNiro, Duvall, Caan). When viewing the entire Saga, at the end, it seemed appropriate to include images from members of the family who had died. A new Michael Memory Montage was created at the end that shows images of each Corleone family member (Vito, Sonny, Tom, Fredo) with their name + birth/death date and scored using "Coda" from The Godfather Part III soundtrack (replacing "Cavalleria Rusticana"). When the montage dissolves to old Michael sitting in the chair, the images of him dancing with Mary, Appolonia and Kay are seen. Then as Michael dies alone, a final title card is presented "MICHAEL CORLEONE 1920-1997" to inform the audience when Michael died and keeping with the visual theme of showing the dates the events took place.
The Godfather Chronological Epic 1901-1980
J

very nice project. But it is not available so far.

Jaro said:
very nice project. But it is not available so far.
Click to expand...

It is on fanedit.info,
or am I missing something?
J

yes there are links to all other fanprojects, but none to the godfather.

Jaro said:
yes there are links to all other fanprojects, but none to the godfather.
Click to expand...

Oh, right, I see.
Links are not on the list indeed, thanks on reporting this.
However the links are on the main .info page. under the cover art: http://www.fanedit.info/

So does this clock in as the longest fanedit yet?

However im going to wait just a bit to hear a couple of reviews first though.

Have grabbed Disc 1 and will watch soon.
J

Anyone else having problems with D4 part 21 link??
D

I probably can't help with a mac problem but you might need to provide more information. What program are you using? What error are you getting?
D

Hi TV's Frink and sorry. I found out, i need a password so until I found it... now it's ok. You can delete my posts from this thread please, they were unnecessary. Greets and thank you!

OK - I just noticed there are two PART 21 links for GF_EPIC-DISC_4.

Sorry for any issues.

darthwagner said:
You can delete my posts from this thread please, they were unnecessary.
Click to expand...

We don't typically delete posts. If nothing else, it serves as a reminder to others to look for the password before reporting trouble

I'm gobsmacked. Absolutely gobsmacked and very impressed. And this is only from reading the description. I need to clear some serious hard disc space before I download this. Well done!

This is high on my interest list right now. I have to watch the original Past 3 first. I always hoped someone would recreate a chronological Godfather cut.
W

27 gig download.....done!! Cant wait to get these babies onto disc and watch it thru. Amazing effort, thank you
P

Hi guys, new to the the site, really want this great collection but can someone tell me how to get accsess to the download? I follow the forums link but when I click on the Rapidshare link I get a rar file and when unpacked I am unclear what to do next, pardon my ignorance and please help.

Hi,
You should find a .dlc file in the .rar,
then: http://www.fanedit.info/jdown.html
D