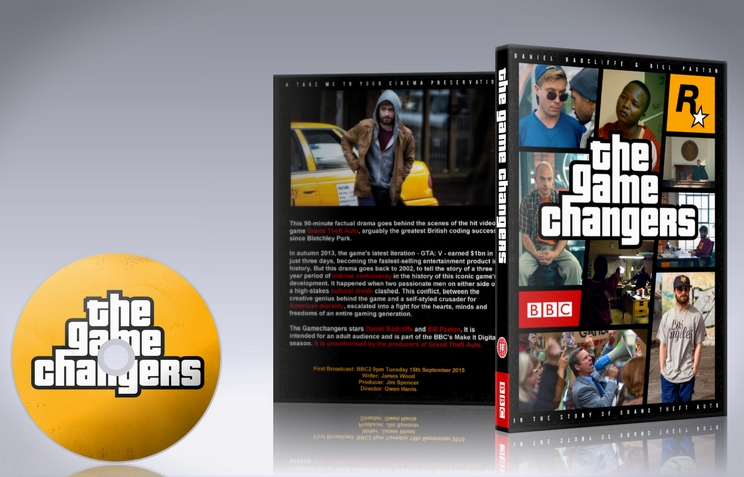 Brief Synopsis:
A preservation of 'The Gamechangers', a BBC TV-Movie drama going behind the scenes of the hit video game 'Grand Theft Auto', arguably the greatest British coding success since Bletchley Park. It stars Daniel Radcliffe and Bill Paxton and covers a three year period of intense controversy in the history of this iconic game's development.

Intention:
To preserve the one-time-only (As far as I know) broadcast of this controversial videogame drama. "Controversial" due to it's mixed critical reception and because of Rockstar Games' anger at this unauthorised biopic. Still given it's fantastic cast and being about a subject (Videogame development) that is rarely dramatised, I thought it was well worth preserving for interested GTA fans.

Editing Details:
Removed the intro and outro promos for other programs from the broadcast, although the mid-credits promo remains. I also sharpened and adjusted the picture to counteract some of the "Streaming HD" compression.

Not to sound like a downer, but I would be very surprised if this never gets a home media release date. This kind of borders on piracy, in my opinion. It just aired a month ago, the verdict is still out on how the lawsuit against it will effect home release.

Preservs are really meant for things that have aired on TV and just disappeared like Keyser Soze.

It's just that the BBC always announces/releases the DVD at the time of broadcast, like their current series starring Stellan SkarsgÃ¥rd, 'River'. That's only had one episode broadcast but you can already pre-order the DVD on Amazon. Or the 2015 Christmas special of 'Sherlock' isn't out for 2 months but can already be ordered. This strongly suggests that the BBC have no plans to release 'The Gamechangers' to home video. But if everybody thinks this is too early to be "preserving" the thing then that's cool. I'll hold it back for a while.

Personally I don't see a problem with it for now, but would definitely take it down if an official release is ever announced.