Given that Netflix and Disney will soon be direct streaming competitors, it makes sense for them to grow apart, and I'd be shocked if a "new" show, even one cobbled together from previous ones, would be allowed. What's more, it seemed to me that the second seasons of IF, JJ and LC didn't make much of a blip even on pop-culture-heavy sites as The AV Club and io9 (let alone pop culture at large). Sure, there were a few episode reviews, but after the non-event that was The Defenders, and with the general novelty of the shows pretty much gone, with little sense of forward momentum and the obvious constraints of being ostensibly part of the MCU with none of the crossover benefits, I don't see much point in keeping this whole thing going. It may be that, to paraphrase Luke, 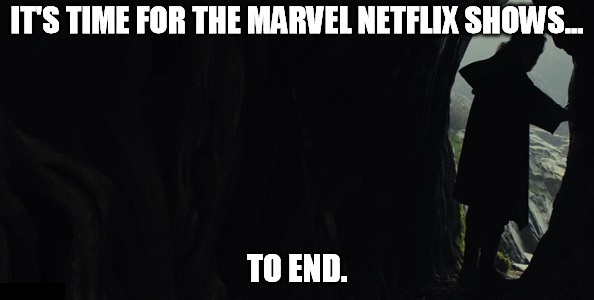 I am happy to report DAREDEVIL is back baby!!!

After a sophomore slump, the third season is so far knocking it out of the park.  I have watched the first 6 episodes thus far, and it has been completely rewarding.  Easily for me, the best Marvel Netflix series by a very wide margin.  Hopefully the remaining episodes maintain this level of quality.

Damn, what a season. I loved it, though think it suffers from the same pacing problems that afflicts all of Netflix's Marvel shows. The first half of the season was solid gold. In the second half, the pacing starts to drag and the subplots become more noticeably thin. Nevertheless, it's given me some of my favourite episodes of television in a while. The episode featuring Bullseye's backstory, in particular, left me floored. I had to stop watching after that one because it was just so heavy.

Please somebody make some TV-movie edits of these. The pacing is my number 1 problem with every one of these shows.

After I finish work on X1, and X3 v2.0, I will probably have a shot at Orson Welles’ “The Magnificent Ambersons” and start thinking about a trilogy of Daredevil movies.  I would have to cut a whole lot of stuff but it would probably be worth it.

A true return to form.  If this is the last season, at least Daredevil went out on top.
My only nitpick from the final episode is they did not close with Matt in the DD suit, that would have made it perfect for me.

Yeah a really good season. It might be my favourite across all of the Netflix series. I'd have to rewatch the first seasons of Daredevil and Jessica Jones to be sure, but this is definitely a contender, and had better pacing than these shows ever do. The new additions to the cast were great, and black suit Daredevil and Kingpin is just great to have back.

If the Netflix run is winding down, I'll be sad but not surprised. Disney are gearing up for world domination (sort of kidding) so there is no good reason to allow a rival to use all these characters. I was gutted to see Luke Cage cancelled, yet I'm only just now watching season 2. Iron Fist was a blight on this whole endeavor, a low-point in a string of frequently padded, meandering seasons, and Defenders managed to be a greatest hits of the shows' weakest traits instead of an Avengers-level event. Boy were these fun when they worked though.
R

Iron Fist season 2 was quite good with iron Fist 1 a problem from bad choreography and too many episodes.

I for one am far more interested in this rumored Falcon/Bucky show than I am all the Marvel/Netflix series.

Loved it.   Very afraid right now that it might be the last.
M

Daredevil gets the ax, but some sorta future is hinted at?  Disney streaming, maybe?  Hopefully?

Sad to hear.
All I can say is we had a trilogy of outstanding seasons, and that we couldn’t have hoped for a better treatment for the characters of Daredevil and its mythology.
Right now though, I’d prefer they didn’t reboot like its being hinted at.

Gutted. At least season 3 was great. I hope JJ and Punisher deliver for what appears to be their final seasons. The Marvel Netflix project wasn't spotless but damn did it work when it worked.

I'd be very tempted to do an edit of at least Defenders. That show is 50% filler minimum, and only really has 2 stand-out action set-pieces. I think you could do a lot to help that show with a dramatic pace increase.

bionicbob said:
After two years of set-up, some uneven entries, it all finally all pays off...

The strength and charm of the series is of course seeing all our heroes together and interacting, and it does not disappoint.  Lots of nice moments, easter egg nods to their Marvel Comics relationships and potential set-ups for Netflix's PHASE II.

And villains....  The true purpose and all five fingers of THE HAND is finally revealed, bringing to close all the dangling plot threads from the various seasons.   Sigourney Weaver is excellent, bringing a layered and engaging performance to her Big Bad character of Alexandra.
Click to expand...

Wow, I had a very different reaction to these show than you did, BionicBob.  I found Defenders to be a huge letdown.  It was like the polar opposite of The Avengers, in that Defenders was actually less than the sum of its parts.

Or really, I guess I should say that it split the middle.  It wasn't as good as DD or JJ, but it was slightly better than LC and IF.  Predictable, I guess.  I do agree with you that the villains finally get a little ground here, and Weaver was great.  On the other hand, totally disagree about the "no filler" aspect.

The worst, most grueling part of this show was watching the characters bicker and bitch at each other episode after episode.  We get it, you're all beautiful and unique snowflakes.  You don't need each other, you don't even like each other.  You're the anti-Avengers.  Could've accomplished all that in one episode, two max.  I felt like the group had very little chemistry and couldn't wait for them to split off so we could just focus on Charlie Cox's Matt.  I would've enjoyed the story 500% more if this was just another season of Daredevil with a few guest episodes from these lesser characters.  Harsh, I know, but true.


bionicbob said:
Iron Fist Season Two, easily the Most Improved Series.   The fight choreography was 110% better.  New showrunner equalled better writing and better pacing.  Of all the season two shows, this one for me felt most like an actual superhero show and had the most satisfying story arc.

Luke Cage Season Two, while season one was hailed by critics, I found it laborious to get through.  This season the pacing was much improved, and while I found the Godfather plot interesting, I was still bored at times and struggled to complete the season.  It is still the most gorgeous looking Marvel series.

Interestingly, my favourite episode was the team up of Luke and Danny.   And similarly, one of the best elements of Iron Fist season two was the dynamic between Coleen and Misty.   The producers should just blend both series together imo and embrace the Heroes For Hire concept.

Jessica Jones.... what happened?  Season one was riveting.  Near perfect pacing and plotting.   This season, not so much.

Punisher Season One... this one was hard to get through.  They just did his origin in Daredevil and then they go do Origin 2.0 for season one.  While I applaud the story exploration of PSTD, the actual story dragged until the last 3 or 4 episodes for me.
Click to expand...

Had such a different reaction to the individual series too, so I guess that's why we got different things out of The Defenders.

Iron Fist: abysmal.  Horribly mis-cast lead who is utterly unbelievable.  Looks like a CK model, not a martial artist.  I was praying for him to be written off his own show and just make it the adventures of Colleen and Misty, easily the best part.  Looked like we might have a redemptive change in direction, too, until that horrible ending.

Luke Cage: I wrote about this in his own thread, but this show just never came together.  S2 was even more of a mixed bag than S1.  Mike Colter just doesn't have enough weight and range to carry the show on his own.  So they leaned heavily on the supporting cast, and it became a very different show.  I think Cheo Hodari Coker wanted to be writing Empire or Atlanta and got stuck with Luke Cage so tried to make the best of it.

Jessica Jones: I know some people loved the 2nd season, but I couldn't have cared less about the main villain, and it felt pretty slow to me.  Such a great comeback in S3 though.  Best finale of any Marvel Netflix show.

Daredevil: the original and still champion.  Had that typical S2 drop in quality, but the strongest S3 of all.  We need a Charlie Cox DD in Marvel films.

The Punisher: this seems to have been a pretty divisive show.  I think it actually had more to say than any of the other shows, and was really interesting politically.  Punisher has always been a character that Republicans, rednecks, and cowboys love, so towing that line between Right and Left (Frank and Micro) made for an interesting dynamic in S1.  I thought it was a blessedly gritty, violent home run.  S2, less so of course, but a great follow-up to the threads from S1.  Horrible last scene, but I'll forgive it.

Question: did the main actors really nail their characters?  Can you picture someone else doing as good/better of a job portraying that character if they were to show up in future Marvel projects?

For me, Cox, Ritter, and Bernthal absolutely nailed it.  It's hard to imagine recasting.  On the other hand, I'm sure you could find a better Iron Fist (maybe base it off an actual Asian Iron Fist?) and someone to do Luke Cage at least on par with Colter.  I think you could find a new Elektra as well if she were to get a Marvel future.  Whereas Rachel Taylor took a pretty C-rate character (Hellcat) and redefined it.  I'd love to see her get a shot in the future, too.
You must log in or register to reply here.
Share:
Facebook Twitter Reddit Pinterest Tumblr WhatsApp Email Share Link
Top Bottom