The Book of Eli (CAL-ligraphy Cut) 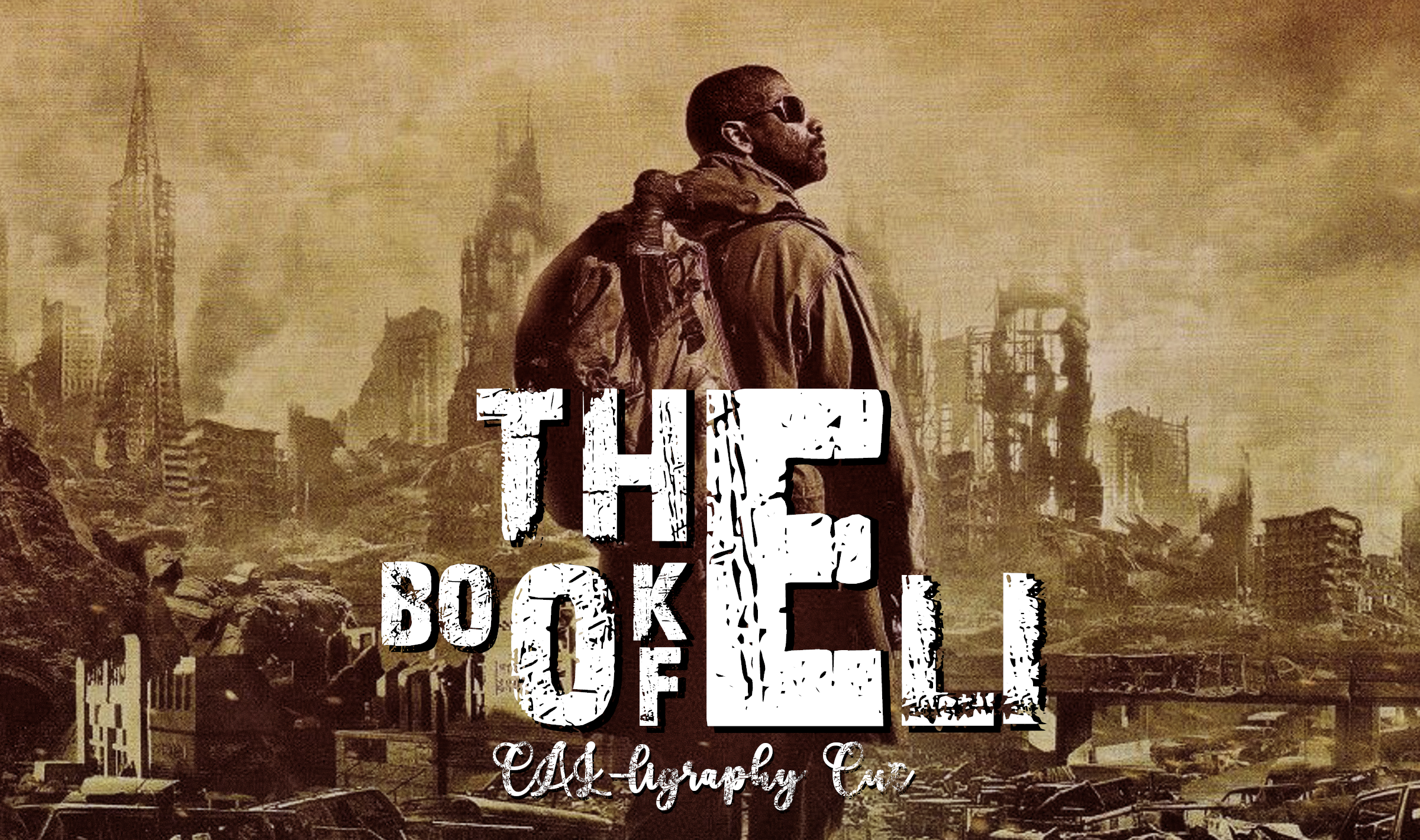 Denzel Washington is my favorite actor of all time. His charisma is magical, his performances captivating, and the way he carries himself through life admirable and inspiring. I had not ever watched this film as I knew it was going to be extremely violent, which isn't my thing, and it's a post apocalyptic movie, also not my thing. BUT, @CAL0901 sent me a message asking if I would ever edit this movie to make it PG-13 like I have for Conspiracy Theory, Patriot Games, and The Game. Well, Cal is quite the human being, so I thought, or rather impulsively was driven to think, "let's do this!"

Now I know that many aren't interested in, or even look down on such edits. I get it. So why make these? Well first off, I love Denzel. Secondly, I personally don't like gore and extreme violence. Thirdly, it's an incredible exercise in audio editing to get it to work without simply muting or abrupt cuts. Last, and most important, Cal requested it

I actually might do a commentary on this one in the future with some video examples to show the extreme nature of cleaning up a movie and some simple image editing to remove elements from shots. It's nothing too technical, but it might inspire someone to take the plunge into more in-depth editing and beyond.

Another bonus from this edit is that the movie has a clean center channel for almost 90% of the movie. I'll render the center track as an additional audio track in case anyone is interested in creating a custom soundtrack.

I thought about messing with the color grade on this one (wow it's ugly), but realized that's kind of integral to the movie as it uses the colors to let you know how toxic, dismal, or safe an area is. So, this edit won't involve any color correction.

Alright, that's enough babbling from me. Here are the deets 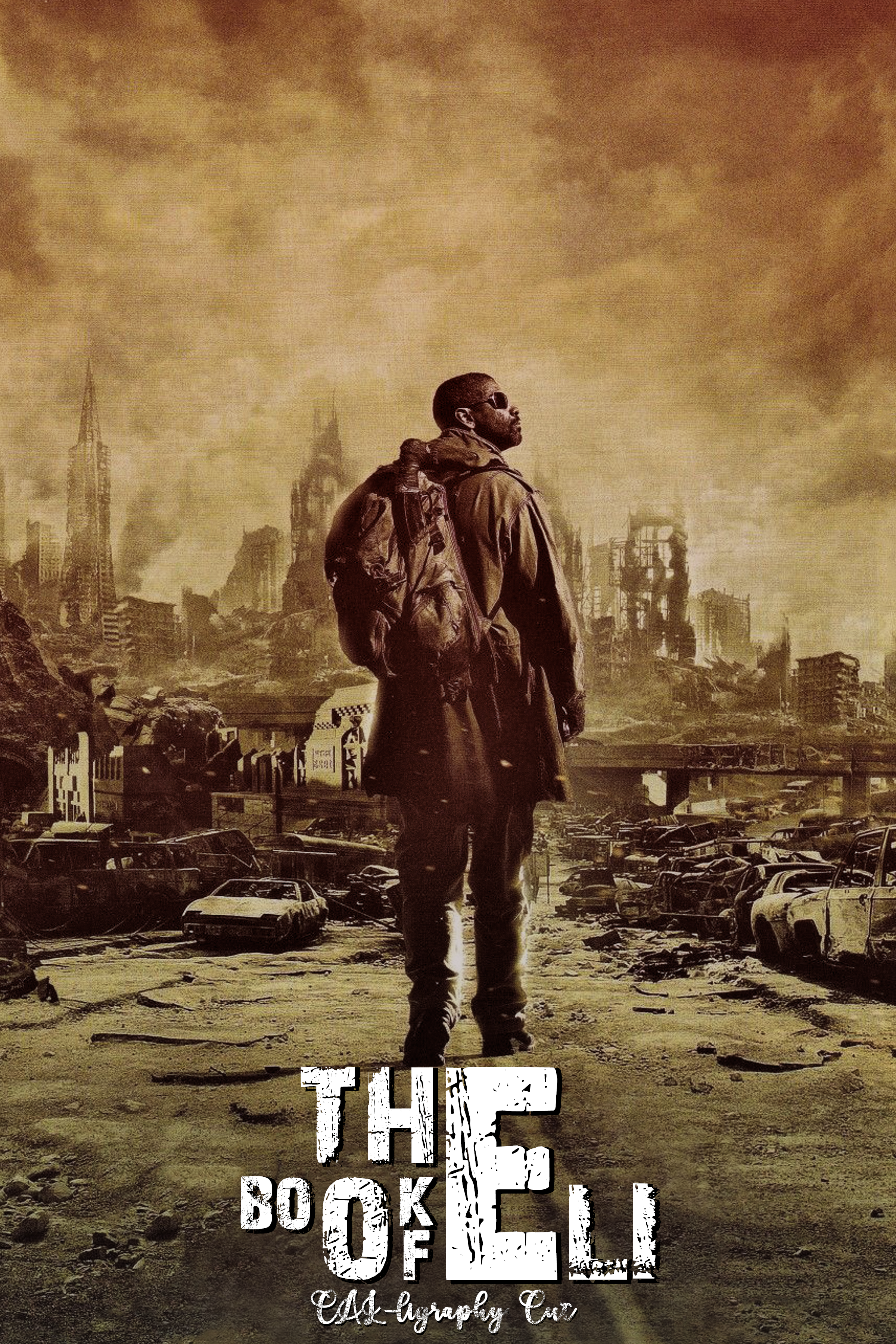 Tagline
“Do for others more than you do for yourself”

Intention
Create a PG-13 version of The Book of Eli

Editing Details
Approximately 254 edits in this one. These PG-13 edits are some of the more intense edits that one can do. Creating a seamless experience when doing such heavy removal of dialogue and visuals is a challenge I'd pose to any faneditor who would like to brush up on their audio and visual editing chops. I know that I grow a ton from doing these in terms of a/v editing skills (or at least I'd like to think that).


Cuts and Additions
0:00:00 + added FE Warning and logos
0:01:11 - Removed close up of man with gunshot wound to the head. Now white dissolves to his chest and continues to pan to the cat and Eli
0:02:49 - Removed Eli removing the arrow from the cat and the juicy sfx
0:03:43 + Added "CAL-ligraphy Cut" subtitle
0:06:42 - Removed Eli finding the man hanging in the closet and taking his boots. It now goes from him backing into the room to him staring a fire
0:10:53 - Removed woman asking for help and Eli getting ambushed. He now finds dead people, scavenges for items and prays over their bodies
0:14:24 - Replaced dialogue of the engineer cursing about Eli not being from around here
0:12:23 - Removed the assault on the woman that Eli watches and his "stay on the path, this is none of your concern" lines. It now slowly zooms to him as the woman runs off and screams, then cuts to the raiders taking the books which is slightly cropped to hide the half naked woman
0:17:59 - Removed henchman swearing
0:18:34 - Removed Carnegie's lewd comment to the raider and brought his "it's on the house" comment up in the mix to play over the shot of the raider looking at him
0:23:12 - Removed Eli grabbing the raider's throat to remove the overly bloody close up of his face
0:23:19 - Replaced another close up of the raider's bloody face with a different angled shot
0:24:46 - Trimmed up the bar fight to remove decapitations, blood spurts, and the man getting his head bashed in
0:39:23 - Reversed shot of Solara to be able to reuse shot later
0:39:45 -+ Removed Carnegie assaulting Solara's mother to get information from her. Added shot of Solara looking down and then up with rebuilt soundtrack to imply that she tells Carnegie about the book
0:40:03 -+ Removed Carnegie's henchman cursing and Added Carnegie's footsteps to sound mix
0:40:10 - Removed Redridge shooting his man in the head +Added a continuation of the background music to smooth over transition
0:43:36 - Removed Carnegie cursing at his men
0:43:37 - Painted out the blood splattering of the man on the roof's head exploding
0:44:08 -+ Removed henchman getting shot with blood spurting and the close up of Carnegie's knee getting shot.. Eli now shoots, and both the henchman and Carnegie go down. Added Carnegie's moans/yells from when he first is hit
0:47:27 - Removed Solara's "Hey, F-U" line
0:47:39 - Removed Carnegie f-bombing at his medic about washing his hands (rebuilt surround track)
0:47:54 - Removed the f-bomb from Redridge's comment about the book as well as Carnegie's f-bomb reply (rebuilt surround track)
0:49:27 - Removed Carnegie's "let's f'n get out of here" line and used the latter shot of Redridge as it shows more disdain for him
0:48:09 + Added shot of Hoyt and henchmen when Carnegie talks about ruling more than one small town
0:49:27 - Removed Carnegie cursing about ruling one f'ing small town
0:51:46 - Trimmed up the ambush assault on Solara. Removed the shot of the thug getting shot through the groin (you hear it while you see Solara, then it shows him looking surprised before he keels over dead). Removed the blood spurt when the other thug is shot through the neck and used sfx from the barfight to remove the overly juicy/gory sfx
0:52:14 - Removed overly juicy sfx
0:55:10 - Removed Carnegie's f-bomb (rebuilt surround track)
0:55:35 - Used a slow slight crop zoom in to hide Redridge's face when he curses (removed) before he say's Solara's name after finding her scarf
1:07:57 - Removed George saying, "forget the f'n china". Extended audio to smooth over transition
1:08:27 - Removed Martha's f-bomb (rebuilt surround track)
1:09:03 -+ Rebuilt surround track to have the explosive continue to beep and have Redridge yell at everyone to get out instead of cursing
1:09:10 - Removed the body parts falling on the ground. It now cuts to Eli and crew firing from the house at Carnegie's men. Smoothed transition by extending the incoming tracks into the cut
1:09:53 - Removed George finding Martha and then going hysterical and the gatling gun scene where he dies. The RPG was aimed directly at he and Martha, so it's implied that they died from the blast then cuts directly to Carnegie and his henchmen
01:11:17 - Removed Carnegie cursing under his breath (rebuilt surround track)
01:12:13 -+ Cut Carnegie's cursing at Hoyt after he says, "what's a tv?" Reversed Carnegie's video reaction as to first look at Hoyt then back at Redridge before yelling at him to go. Rebuilt soundtrack to smooth transition
1:16:48 - Removed Hoyt's cursing when seeing Redridge's overturned truck (rebuilt surround track)
01:17:47 -+ Rearranged Solara's reaction to Redridge grabbing her arm in order to use it in place of the scene where he pulls Eli's machete out of his chest. Adjusted surround track to remove some of the more gory sfx
1:39:44 + Added custom faneditor credits
1:40:29 + Added "A Digmodfication Fanedit" credit
01:46:58 + Added logos to end of movie

The edit is uploaded and ready for viewing

I've also included an aac clean center channel audio track that can be dropped into your NLE to create a custom soundtrack for this movie. Anyone up for a challenge to create alternate surround tracks? If so, I'll add them to the folder so others can mux them into their files.

DigModiFicaTion said:
The edit is uploaded and ready for viewing

I've also included an aac clean center channel audio track that can be dropped into your NLE to create a custom soundtrack for this movie. Anyone up for a challenge to create alternate surround tracks? If so, I'll add them to the folder so others can mux them into their files.
Click to expand...

You got me thinking, and my first idea was: Ennio Morricone. I suppose that by influence of the Dollar Trilogy, Morricone and narratives about wandering characters are a perfect match. I might take a look into it (even though the edit doesn't implement the only change I would have wanted in the film, but what can I do).

Dwight Fry said:
You got me thinking, and my first idea was: Ennio Morricone. I suppose that by influence of the Dollar Trilogy, Morricone and narratives about wandering characters are a perfect match. I might take a look into it (even though the edit doesn't implement the only change I would have wanted in the film, but what can I do).
Click to expand...

That would be a fun take on this movie!
What was the specific change you would have wanted?

DigModiFicaTion said:
That would be a fun take on this movie!
What was it he specific change you would have wanted?
Click to expand...

Never to reveal what book it is. The ending as it stands plays dangerously close to propaganda, and not revealing it would allow the viewer to project any book they wish into it, be it that one or any other.

Haven't done a trailer in a while, but honestly haven't been this jazzed about an edit in a while. Here you go!
Last edited: Aug 20, 2022

Heck yeah! Now that's a trailer! Awesome! Compels me to want to see an edit of a movie I could do without-starring an actor I really like.
Last edited: Aug 15, 2022

Define zapped.
The video is playing fine for me signed in and when I play it in an incognito browser and other accounts.

Odd. It's there just fine now.

Looks like two words snuck through the editing, SO, if you were hoping for a bit of cursing, snag it fast before I update the file

Everything should be good to go. I've also updated the trailer so it's in HD. Youtube didn't like the dimensions of the source video so I did full 1920x1080. Special thanks to @CAL0901 for getting it all calibrated and for the subtitles they made! They will be uploaded to the folder soon.
B

One or two curses is OK if at a specifically chosen and appropriate time. Sometimes I think having to pick the time for the single four letter word use helped enhance how much it showed the emotion of the character.
You must log in or register to reply here.
Share:
Facebook Twitter Reddit Pinterest Tumblr WhatsApp Email Share Link
Top Bottom