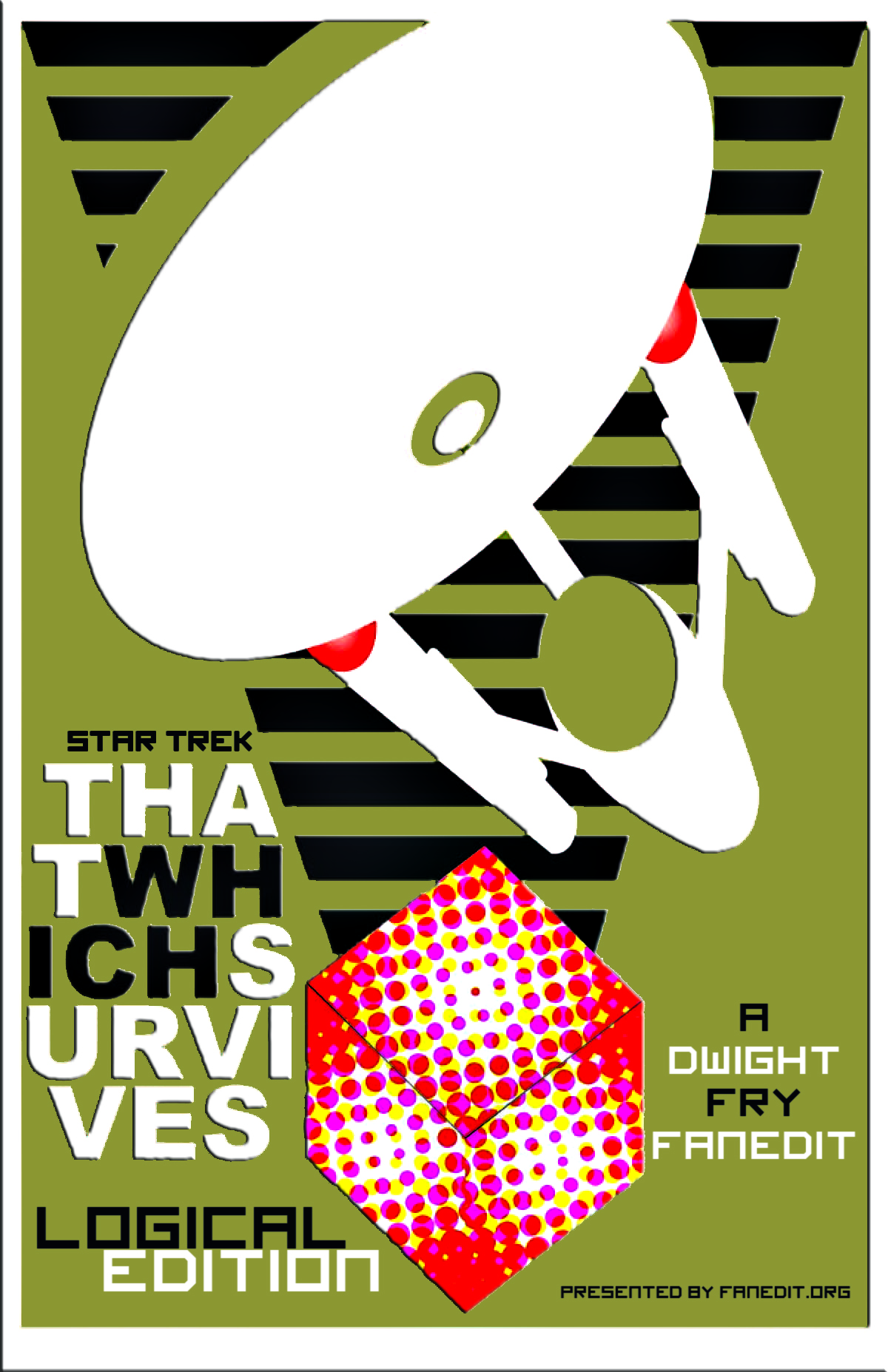 So after a LONG time without editing anything, I decided to start warming up to come back, and picked something not too complicated to achieve. The more complex edits will eventually come.

Just a light edit of a classic Star Trek: TOS episode. 3 minutes cut in total, but 3 minutes that make a big difference.

"That Which Survives" has always been a complex one to stomach for me. On one hand I enjoy the main Losira plot, but for me the episode is ruined by having Spock act like a completely douche to everyone, but particularly Scotty and Uhura, for no reason whatsoever. @The Warlord got around the problem in his "Star Trek: Survival" edit by linking his behavior to the Pon Farr, but in the process that lost the main plot of the episode [EDIT: He did not. That was a misconception I got from his cutlist. Still, he trimmed it down while I didn't]. This edit presents the main plot intact, but with the Spock scenes trimmed back to his usual persona.

Presented in a 5.8GB (Blu-ray compliant AVC + DTS) .mkv file, which makes this my first full HD release. Very special thanks have to go to @bionicbob for previewing the edit and providing his usual Trekker wisdom. Live long and prosper, good sir!

- Added FE.org logo at the start.
- Cut Spock's reply to Uhura "My head seems to have impacted with the arm of the chair" and Uhura asking again. Now he replies properly the first time around.
- Customized the title card, motion tracking the additions in Adobe After Effects since the original was not completely still.
- Cut Spock calling Scotty's statement "both illogical and unworthy of refutation".
- Cut Spock telling Scotty to restrain his leaps of illogic.
- Cut Spock's "unavailing and undignified" remark to Scotty.
- Cut Lt. Rahda telling Spock the estimated time of arrival, and him again chastising her for not being more precise.
- Cut Spock telling Dr. M'Benga to refrain from guessing.
- Only non-Spock cut: Cut Sulu's horribly sexist line "Stop or I'll shoot! I don't want to have to kill a woman".
- Cut Spock's extremely cold lines to Uhura about the woman having gotten off the ship "the same way she came in" and calling the chances of Kirk and the others being alive "gambling".
- Cut Spock's inappropriately over-precise calculation of the minutes and seconds until maximum overload, and Scotty telling him that those few seconds don't make any difference.
- Cut Spock coldly telling Scotty "I'm aware of these facts. Please get on with the job" when facing the possibility of having to jettison him.
- Cut Spock asking Scotty about the purpose of saying "thank you".
- Added acknowledgement to the end credits.
Last edited: Wednesday at 12:00 PM

If ever you want anyone else to preview anything Trek related, please feel free to call on me.

Regarding my own edit losing the plot of the episode... How so??

*So* pleased someone else is finally tackling TOS too!!

If ever you want anyone else to preview anything Trek related, please feel free to call on me.

Regarding my own edit losing the plot of the episode... How so??

*So* pleased someone else is finally tackling TOS too!!

Thanks for your message and for your offer! Me assuming that your version lost the main plot of the episode was based on your cutlist, as I haven't had the opportunity to see it. It's not found on the usual site for download (if possible, do send me a link to it, as I'm not only intrigued by it but "Amok Time" happens to be my favorite TOS episode of them all). The only edit of yours I've seen so far is the Twilight-Zoned "Spectre of the Gun", which I liked a lot.

Ah ha. Yes I stopped putting edits on the fan edit info website as it took forever for them to be put up. It looks like things are back up and running, so I shall endeavour to put all my edits up there.

Looking at my cut list on its own, you are right - it does appear as though I have removed the main plot. However, in actuality I tidy and severely trim the planet-side footage without actually removing the plot. Losira still appears etc, but I focus on the Enterprise moreso.

Most of my cuts are actually the cuts made for syndication, and I used the Nitpicker's Guide as reference. The list 'looks' a lot, but largely it's trimming, and leaving some things off screen that we don't necessarily need to see (including a rare occasion we actually see a crewman buried. Other than The Galileo Seven, I can't think of any others. Does Kirk just leave the bodies behind when he flies off each week, or does he beam them back aboard off-screen?)

If I had edited That Which Survives only, then I probably would have gone down a similar path as you.

Looking forward to watching your version!

PM me, and we will exchange links!

But I forgot to mention, I love the poster for made for this project! Very cool!!!

Thanks a lot for your wonderful review, Bob! And as for the poster, kudos must go to artist Juan Ortiz, who created it. I just tweaked it a bit in Photoshop for my purposes. 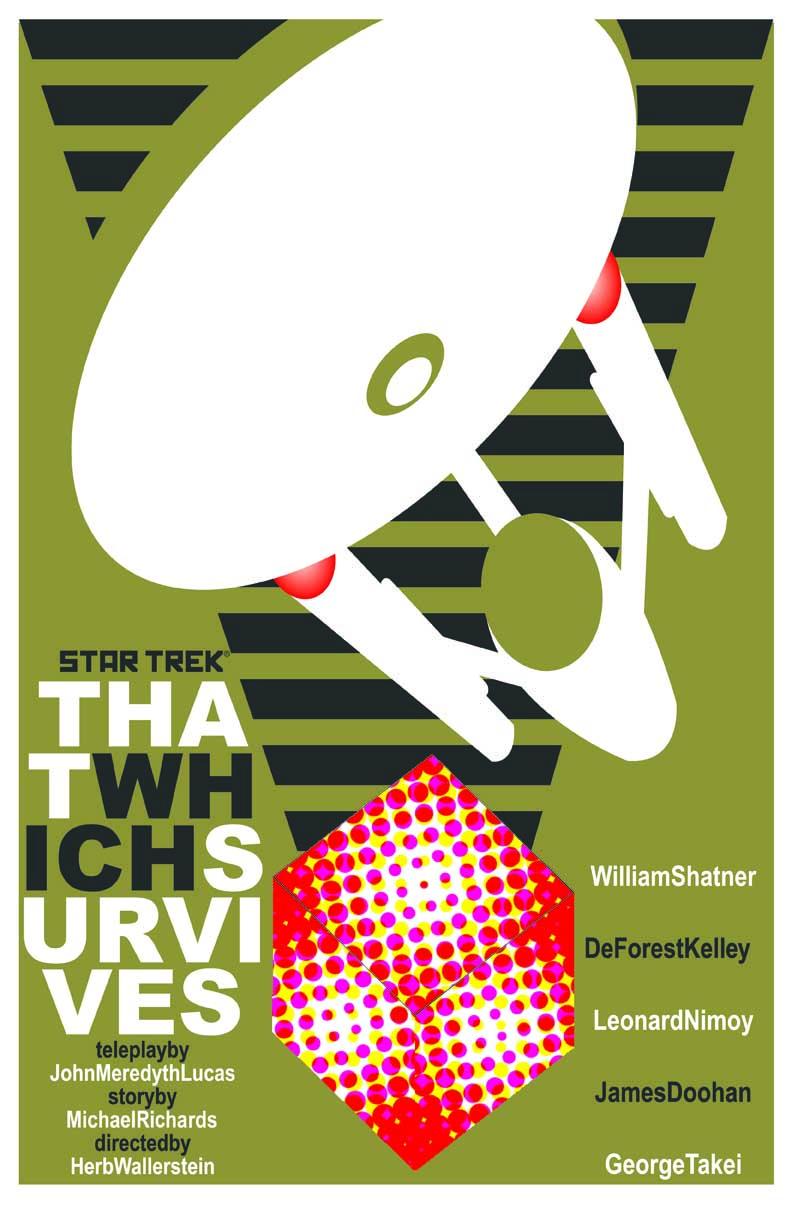