Fanedit details :
NTSC SL DVD
anamorphic widescreen
ac-3 2.0 audio
created from 15 youtube videos, until a better quality version is available
Every review contains still of its parts, each movie review can be selected.
menus with sound

Purpose of this fanedit:
These are 4 in-depth reviews about all 4 TNG Star Trek movies. In his unique, funny, very smart and to the point way RedLettermedia shows us what went wrong with all these movies and why the TV shows were so much better. Star Trek Generations is considered by him the worst movie ever made. And Nemesis is not much better. In here we also learn more details about the "accident" of his wife and pizza rolls.

about Generations:
This is my very in depth review of the movie Star Trek: Generations. After I saw this movie many years ago I didn't like it. It wasn't a TNG movie and it wasn't a Star Trek movie. It was a sloppy mess of sell out schlock. It felt rushed and slapped together. A lot of parts didn't make sense to me and it's kept me awake many a nights thinking about it. Then recently I decided to make this. The funny thing is I could have gone into more detail getting specific about shot choices, lighting, the way the sound was recorded, etc but these are a lot of the major gripes mainly dealing with the plot and characters.

about Insurrection:
Here it is folks, my in depth review/analysis of the 1998 "feature" "film" Star Trek insurrection. This review focuses on plot suck and picard suck, pointing out yet again the flaws of the TNG feature films and how their failure on the big screen is due to the fact that everything that worked so well in the TV show is changed for the movies to appeal to mass audiences which in turn makes the movies bad and unappealing.

about Nemesis:
My Star Trek Nemesis review/analysis: I delve into some pointless details and swear a lot. On the whole I thought Nemesis was a slickly made movie. I liked the Remens look a lot. and the lighting was really nice, the visual fx much better since insurrection. This movie felt more authentic and more well made, but at the same time it felt rehashed, and tired. That's the theme here. Even though Picard has a fresh copy of himself, the movie suffers from a lack of fresh ideas. Its another villain/revenge/doomsday device/picard and bad guy face off/thing explodes movie.

How purpose was achieved: by carefully addressing what had to be addressed. Sorted, constructed, thought through, with lots and and lots of examples.

Hardware and software information : not known
boon23: for the DVD creation I used avisynth and virtualdub filters to get rid of some noise, corrected the black levels (as the youtube videos are very milky), cropped to what was possible for a widescreen format (sorry for the sidebars, but it was either that or full-screen), converted carefully to mpg, created cover art and DVD menus for a neat presentation.

overall I think the quality is really ok considering the youtube source. This one will not be watched for its awesome sound or video quality, but for its awesome content.

Additional Comment: boon23: this is the most hilarious thing I have watched in a long time. Great texts, very clever, never boring. This was a hell lot of work and it totally rocks. This is why I had to put it on DVD, so you guys can share it with your loved ones or buddies. It is what so many people think when it comes to the first of the Star Wars prequels.

The original creator has been contacted by me for higher quality source files or for his very own DVD version (if such a thing exists).
Time needed for the edition: must have been VERY long
persons involved: RedLetterMedia
Additional information links: you can find all the youtube videos here: http://www.youtube.com/user/RedLetterMedia 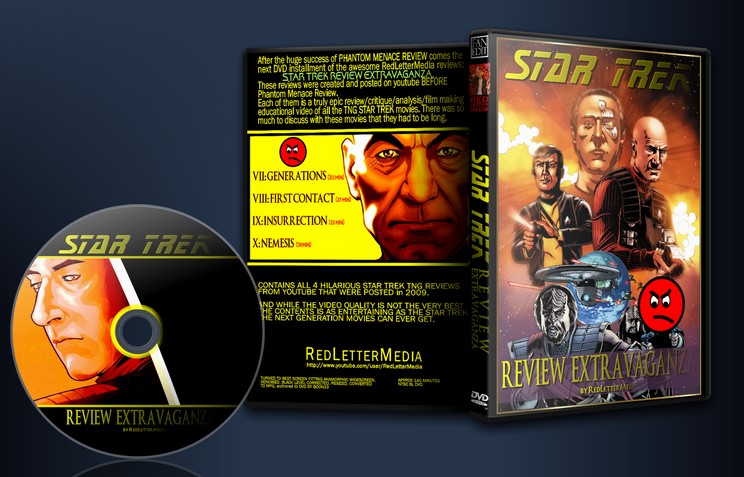 I haven't seen any of the TNG movies in years, but these darn reviews have pretty well cure me of any desire to revisit them... and I used, many years ago, to enjoy all four.
C

Man, I almost didn't watch the review for First Contact, because I had such fond memories for how awesome it was. It was sobering indeed to watch this brilliant man tear the crap out of that film. And hilarious of course.

My favorite part of all the reviews so far was from the Nemesis review when he points out the stupid green plastic drum cymbals.

Thanks for putting this together for us Boon. I'll be making copies for my Dad for sure.

I am only halfway through watching this but its absolutely hysterical.
I loved the part about translucent aluminum and picards treasured artifact :lol: :lol: :lol:
great stuff, thank you to the creator and to boon for the collection/restoration.
You must log in or register to reply here.
Share:
Facebook Twitter Reddit Pinterest Tumblr WhatsApp Email Share Link
Top Bottom