While I do not think it is the best of the entire Trek Movie franchise, it certainly my favourite of the Kelvin flicks.

bionicbob said:
While I do not think it is the best of the entire Trek Movie franchise, it certainly my favourite of the Kelvin flicks.
Click to expand...

I agree. I don't think that it even comes close to the best of the original movies, but I do consider it to be better than the first two Kelvin movies by far.

The main thing that, for me, holds it back from being as satisfying as I would have liked is Krall. Based on his line "This is where the frontier pushes back" in the trailers, I had hoped that he would have grievances that provided a genuine challenge to the ideals of the Federation. It would have been interesting to see a battle of ideas where both the pro-Federation and anti-Federation sides make good points and have their pros and cons. (Think along the lines of "Captain America: Civil War".) But instead, he doesn't have much depth, and comes across as a sort of shallow strawman opponent to the Federation.

A fun Trek down memory lane...

This is one of the better fan FX reels I've seen. With some sharper matte lines, less of a modern blue tint and if they hadn't gone with super glowy windows, it would be pretty convincing as 80s/90s practical FX work: 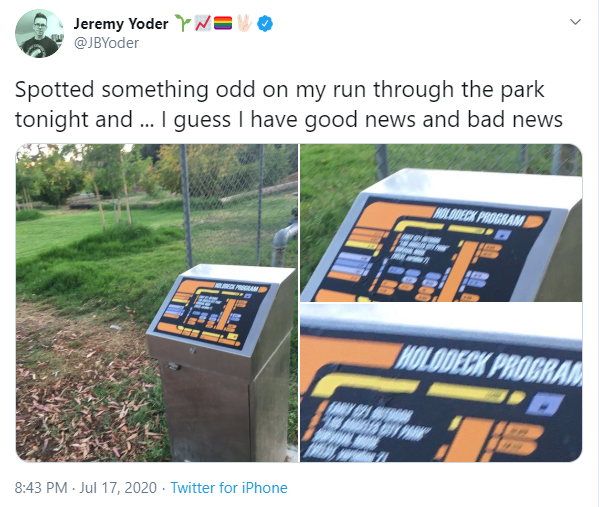 It looks like knowledge of Pon Faar has become much more common than in TOS days.

^ Yeah, that's one Wikipedia article the Vulcan Science Directorate won't be able to sweep under the dresser.

^ That looks a bit creepy to me (less so when they aren't talking) but it was funny to see wiry TOS Bones with Urban's ripped bod .

Less than a month to go 'til Discover S3. Did I miss that there's been a trailer out for months (or did I just erase it from my mind)?:


Before they were content with metaphorically killing Star Trek, now they've literally killed off Roddenberry's UFP dream in this season.

TM2YC said:
Less than a month to go 'til Discover S3. Did I miss that there's been a trailer out for months (or did I just erase it from my mind)?:


Before they were content with metaphorically killing Star Trek, now they've literally killed off Roddenberry's UFP dream in this season.
Click to expand...

Actually, it reminds me of Gene Roddenberry's ANDROMEDA.... transported to the future to rebuild the Federation.

Also, before DS9 was greenlit, a very similar concept was discussed.

Just watched this and headed over to share. Looks like I'm late to the party
Some of the better deepfakes I've seen. As TM2YC pointed out their faces on Pine, Quinto and Urban's bodies is quite odd looking.

It's a two-hander double-header! 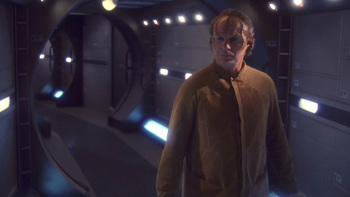 I felt like watching an ENT for some unfathomable reason, and remembered "Doctor's Orders" as being kind of fun. Well, it isn't, really; it's just dull. Those crewmember bunks must have some awesome mattresses, because apparently a small device can lower your neural activity to nada for a week, while you both don't soil yourself and don't get bed sores. Porthos the beagle gets a fair amount of screen time, but... man, this show is favorless. It's the tofu of sci-fi. 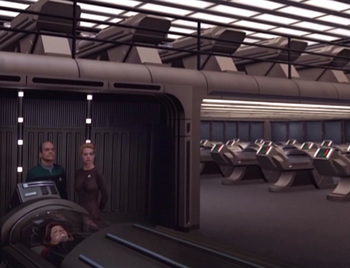 "Doctor's Orders" was, in fact, a rehash of a late 4th-season Voyager episode, and, no disrespect to John Billingsley, Seven is a much more interesting character to run a ship solo, partly due to Jeri Ryan's always-compelling performance, and partly because she's got the wonderful Picardo to bounce off. The basic plot is still idiotic, and Janeway is a complete lunatic to think putting the entire crew but one (plus an EMH) in a month-long coma to navigate through a deadly nebula is a better idea than going around it, no matter how large it is (what's an extra year or so amount to when you've already got 75 to go?), but, I guess the alternative was actually developing characters, and we couldn't have that! "One" is fluff, but it's decently made fluff. (Now, someone tell me why the efficiency-obsessed Seven wears heels, again?)

If you haven't read the Chief O'Brien at Work comic, I highly recommend it.
There's a new "movie" adaptation on Vimeo:

For Christmas Eve last year, my folks and I watched the A Christmas-Carol-esque "All Good Things...", so of course this Christmas Eve, we just had to follow it with Generations!

I've said it before, and I'll say it again: TNG is my favorite Trek, and Generations is my favorite TNG film; ergo, Generations is my favorite Trek film overall. I respect Kahn the character and all, but, even if he's similarly hammy, I think Soran is the more interesting villain - a traumatized drug addict who has no limits whatsoever to what he'll do to get his next fix, even after 78 years. The detail that the Borg destroyed his homeworld struck me as pure fan service, but now I of course realize it's a bit of canon carried over from "Q Who", since he and Guinan are of the same people.

As TM2YC noted in his review (link below), the atmospheric dark yellow lighting is very much over the top, and the uniform situation is a hilarious grab bag, but such awkwardness only makes me love the movie even more. I also love that Kirk and Picard have an argument of historic importance while scrambling eggs - it's just the right amount of goofy. This time around, I couldn't help noticing that the action choreography at the end was pretty poor (though Shatner did get to bust out his closed double-fist wallop one last time), but, what can one do? Generations probably deserves a B+ at most, but, given my unapologetic love for it, I'll give it an

TM2YC said:
Picard lets go of the Nexus far too easily, with no real explanation given beyond him being our hero...
Click to expand...

That's never bothered me before or this time, because A) Picard knew what the Nexus was going in, and that his entry there came at an awful price, and B) he's just not that emotion-driven a guy anyway.