So here is my first fan edit project. I'm a complete amateur with no experience in the entertainment industry, just doing this for fun.

My plan is to take the 6 series of the Clone Wars and edit them into 9 movies of roughly 2 hours each in length. The edits will be aimed at a more mature audience, with nearly all of the childish humour removed (battle droid slapstick, Sky Guy, Snips......).
Overall I'm looking to produce a series with overarching themes, particularly Anakin's turn to the dark side.

Episode I
Completed May 2015
http://www.fanedit.org/ifdb/compone...clone-wars-episode-i-army-of-the-republic-the

Never watched the Clone Wars series but I've heard good things about it. Would definitely like to watch a condensed version of the show.

Good luck and I hope all goes well!

Love the Clone Wars. Definitely one of my favorite pieces of Star Wars canon now. Looking forward to seeing what you are able to put together. Good luck.

I'm just the opposite. I can't stand ten straight minutes of this show. I'll be very impressed if you can pull anything of value out of it. Good luck

I have viewed several episodes, in rather random order.
After about half an hour my mind starts to go numb from all the fighting - leaping - electrobolts.
Hoping you can edit coherence into otherwise game-shooter violence.

Very interested in seeing how this turns out. Since the show is over now, it's ready for plenty of good fanediting.
H

Very excited for this!

I'd be curious about is how you plan to incorporate season 6 considering it's available only via Netflix streaming, at least here in the U.S. That said, Netflix did finally release House of Cards on DVD so it stands to reason that the six season of Clone Wars will get a physical release at some point as well.

I watched for a couple of seasons I think. There was some great character stuff in there, much better than the prequels. This could work out really well.
S

If it's not available on bluray then I have no idea. At my current progression, It will be a while before I get onto the season 6 stuff. What are your plans? I've just watched your episode 1 (review coming soon), how close is episode 2?

Episode 2 and 3 are in the planning stages. I may do Episode 3 first so I know exactly what needs to come before to get to the finale.

By the way, that was a nice trailer you put together. I'll definitely be checking out your version once it's released.
E

Do you know the chronological order of the episodes? If you don't, here it is: 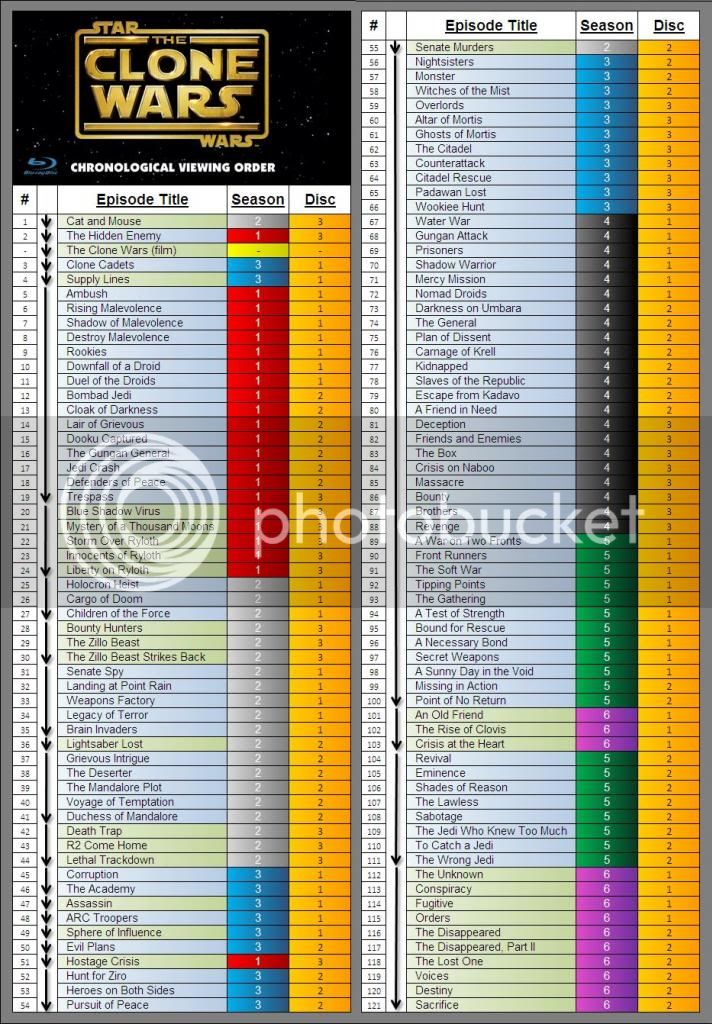 Q2 said:
Episode 2 and 3 are in the planning stages. I may do Episode 3 first so I know exactly what needs to come before to get to the finale.

By the way, that was a nice trailer you put together. I'll definitely be checking out your version once it's released.
Click to expand...

Thanks. I love movie trailers and had a lot of fun putting it together. Also, as a complete novice at this, I wanted a small project to release first to test out my abilities.

My film is coming along slowly and is probably 95% done, but the last tweaks and additions are going to take a while. I'm probably not going to make my May 4th deadline, but hopefully by the end of May.

I'm just tweaking my opening sequence at the moment, and will post the first 5 minutes this week.

Here is a clip to demonstrate the extent of editing I'm going for. It is a scene that really annoyed me in the movie because of the over-the-top bickering between Anakin and Ahsoka. I've cut a lot from this scene and moved shots around, but the result is a much more watchable sequence.

Great scene there! They really seem to be a lot less annoying.

I actually remember viewing this episode, fast forwarding it because of the irritating characters.
Solid work, Smudger9.
S

The first half of episode 1 is completed, with the second half 90% completed. I'm currently trying to find sufficient quality dialogue to see if I can implement my changes to the plot of the film.
I've now completed the opening sequence, which took a while since I wanted the official Clone Wars Logo to appear at the start of the film, and getting seamless matching of star fields was annoyingly tricky, but at least it can now be reused for all remaining episodes.

Here are the first 5 minutes of the movie.

Very nice. I think a massive 9-film treatment of the Clone Wars series could be compelling.
S

Hal9000 said:
Very nice. I think a massive 9-film treatment of the Clone Wars series could be compelling.
Click to expand...

May I ask what the cutlist for that opening clip is? Awesome work, BTW. This project seems to be turning out very well. Hopefully this can be a version of TCW I can show these to my friends instead that are iffy about watching this show.