When i came up with my Carpenter, Argento and Cronenberg idea's i already started the thread of The Hills & Inferno
Mostly i don't edit in the weekends because my girlfriend wants to do some shopping and some other boring shit, so i go with her because she likes (strange enough) the company and i think you must pay some attention to the woman and she likes to talk to people, buying clothes enz
But at that time i wanna shoot myself because that buying of clothes is so fucking long and a complete waste of time.
But last weekend she was sick, a little flu i guess and i was acting that i feel terrible for her, but forget it!
I was free to edit man and after i give her some medicine and tea i locked myself up in my cinema workroom i started to work on:


I wanna do this first, i also work on Hills & Inferno but that i'll do in the nightshifts


Assault and Escape from New-York


Man, it brings a lot of memories these movies, i was a very young kid when this hits the theater.
It was fantastic that Carpenter stuff, the music of Assault it was going for days in my mind, the acting, that widescreen of 2.35.1 (my favorite ratio)
A few years later Escape from New-York i saw it 5 times in nearly two weeks, absolute great, the action , the music, the huge tits of Adrienne Barbeau
Man it was great in that time


But now the edits:


The most important cuts:


LT Ethan Bishop walking down the streets to his car is cut, after the blood oath i go straight to the commission that he must go to division 13
When Starker walks in the prison i cut straight to Napoleon Wilson so the other inmates are cut
After they walk out of the prison you see them all but that scene in between is cut
I think That Wilson is the main character in this so that is the reason


Dialogue in the bus between Starker and Wilson is cut


The ice cream man is watching in the original the gang members
Well, not in this cut, he is taken by surprise
The shooting of the little girl is more to the point, all the dialogue and scenes before that scene of the father and daughter is cut


Here and there some trims of course in the whole movie 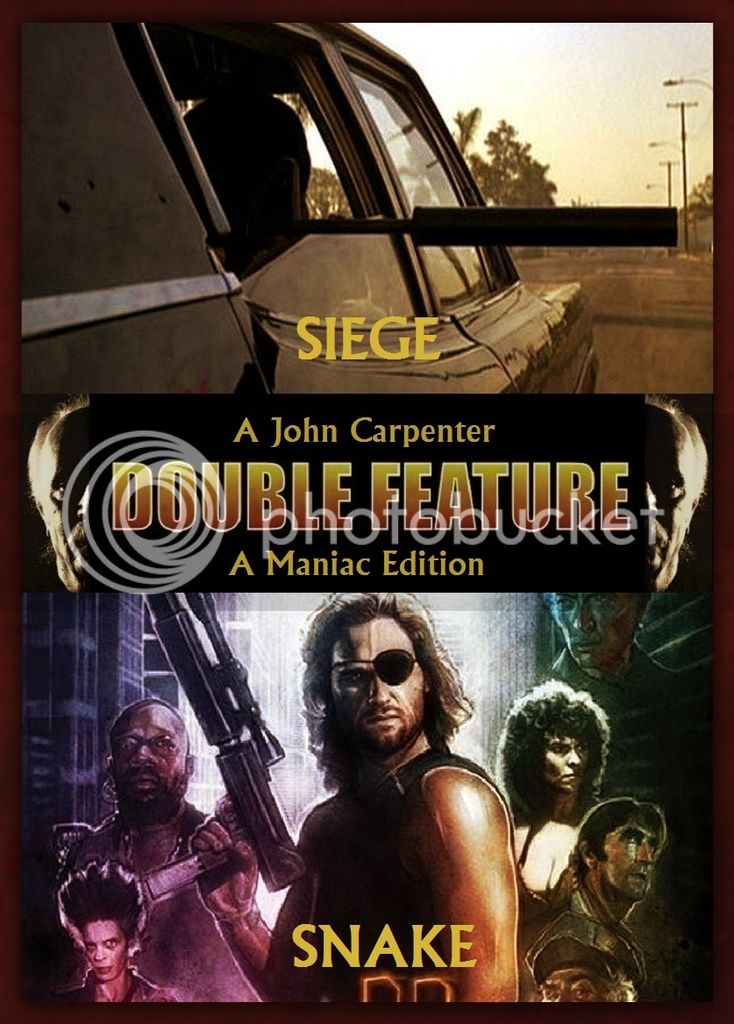 Nice. This is one Double Feature I'm definitely looking forward to.


This cut runs now about 70 minutes


Other credits, opening scene is trimmed
When Snake Plissken is flying to the world trade center is in this cut a lot faster then in the original
Chock full o'nuts is trimmed
In the basement some scenes are cut
Cutting in dialogue
Scenes with the cab are cut
Season Hubley is cut out
This is a nice action cut the way i look at it now
But as a whole there is lot of work to do but i have a great time with this

The Assault aka Siege cut is finished
It was a hell of a job to cut this in the way i wanted it to be, but at the end i had a good feeling of this cut
Next week i put my hands on the rough cut of Escape
The running time of Siege is approx 61 minutes

The rough cut of Escape is cleaned up
Total running time of both movies is approx 129 minutes
The Siege about 61 and Snake around 68 minutes
So the editing is done, this week i work on the music

By the end of the week this cut is finished
I release this together with my Lone Wolf cut on friday
Well, i hope the Carpenter freaks likes it, for me it was a real pleasure to work on this
Now i go further with my The Hills & Inferno cut, and after that it's time for my Halloween & The Fog Double Feature
T

I thought I was interested in this edit but then you went and wrote "Halloween & The Fog"!!!

??? Halloween and The Fog is the second Carpenter DF after The Siege and Snake
The Titles are "The Shape and Ghosts"

I think what he meant to say is he's even more excited for your Halloween/Fog double feature.
T

Yes, exactly what I meant. Thanks Neglify

Ohhh Sorry about that, well, if everything goes well "The Shape" and "Ghosts" are released in March.
I work on that together with my Hostel cut
Last night i finished the "Siege and Snake" cut and i saw it on my big screen
It looks great in quality, the sound is AC 3 and it runs 2 hours and 9 minutes

I did some more cuts / changes in this DF:

I already said that i made Wilson more the silent type, so in this cut there is no "Do you have a smoke"
I have something with that "well known lines" in movies they belong to the originals so to make the edit "different" i cut that always out.
I did that with Scarface: "Say hello to my little friend" Terminator: "I'll be back" and so on
In the original of Assault the ice cream man sees the gangmembers but i think it works better if they follow him and he is taken by surprise so i recut the whole scene with the killing of the little girl.
There was some problem with the fact that he turns off the music of the ice cream car (that scene is cut) but after i used the following scenes you don't here that irritating bell tune.
In this cut the bell tune is still "on the air" i re - recorded the tune on a seperate track so the killing is now more "sick" when
Doubleday shot the girl and the ice cream man you still here that happy tune.
There are some music tracks of Escape in this cut and there is some music of Assault in Escape
At the end of Escape the president plays the tape and everybody knows that it's the wrong tape
A great scene after i watched it so many times but i hate that Boogie Woogie shit so there is a scene in the cab of Cabbie that he owns a lot more tapes so i decided to make that scene a little different in audio

ah ok, I misunderstood the title at first, thought you were doing a mashup, combining the two flicks into one. Not sure how that would have worked but was interested enough to click the thread to find out.

This looks cool too.

There is no way to put this two movies together in one story
From my point it all works well with Terminator, Halloween: The Devils Eyes and my last cut Lone Wolf, de upcoming Hostel cut because there is a way in those movies from the point where the original ends you go further with the second cut

My only mistake was Robocop the extreme edition when i look at it now i think it was better to make a double feature of it
instead of put those two together
The idea's of DF was coming up after that and to "remake" it well, i don't know....:-(

Thanks Neg, for the great review on this
C

I know this thread is 5 years old but if anyone has a download link I would greatly appreciate it!

@CarnivrousFish please take a moment to review the forum rules. These are located at the top of every forum page.

Specifics about requesting edits can be found here.