Two months ago Marvel's Kevin Feige announced the upcoming live-action She-Hulk tv-series for Disney+. Few details were given, besides the confirmation that the Hulk will make appearances (played by Mark Ruffalo). This is the logo:

Last week the rumor was added that the series may include the characters of 'Thunderbolt' Ross (William Hurt) and his daughter Betty Ross.

I'm a She-Hulk fan. Not all iterations have stood the test of time equally well, but on the whole she is a stand-out superhero for not taking herself too seriously, (trying to) have a life outside of fighting villains, breaking the fourth wall (talking to the reader) before anyone else did. And she pulls off making 6'7" in green look dynamite!

At this time Marvel isn't confirming much, just that lots of details are still undecided. To start the thread, in anticipation of this Marvel series and in my vain hope that a Marvel exec reads this post, here's my wishlist for the She-Hulk tv series:

1) Written by Charles Soule and Dan Slott. Their storylines over the past 15 years are a fresh take on a superhero's life and all-around interesting compared to some of the staid stories that make origin stories formulaic. Watch this mini-cartoon for a good summary of Soule's writing:

2) Conceptual art by Kevin Wada. His She-Hulk is incredible. His cover for She-Hulk #2 (2014) sums up our heroine's life perfectly: 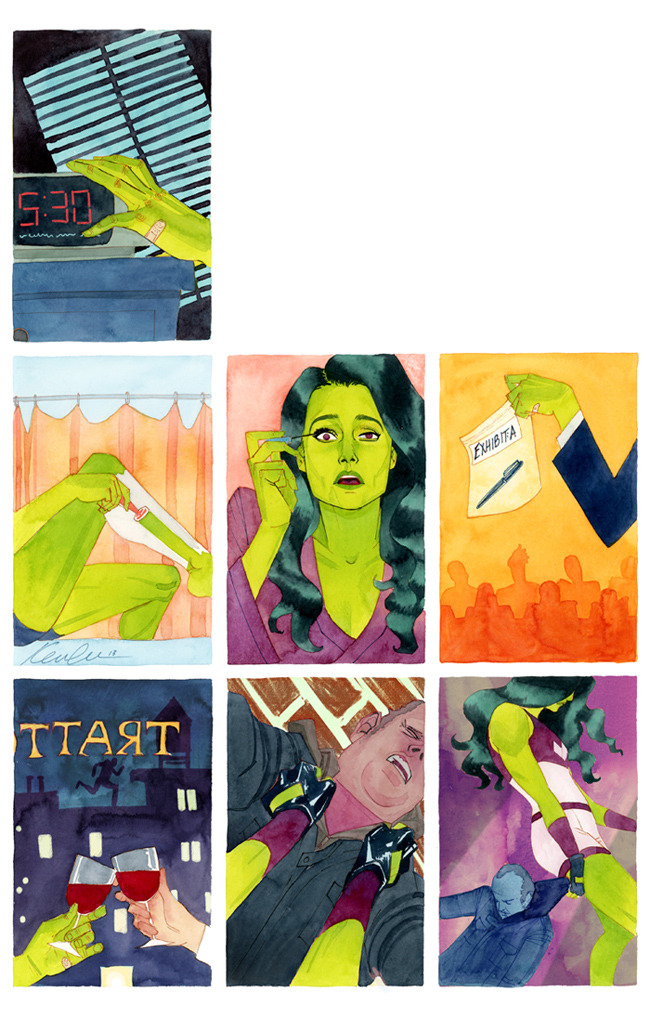 And two more great Wada drawings that show She-Hulk having a life outside of fight-scenes: 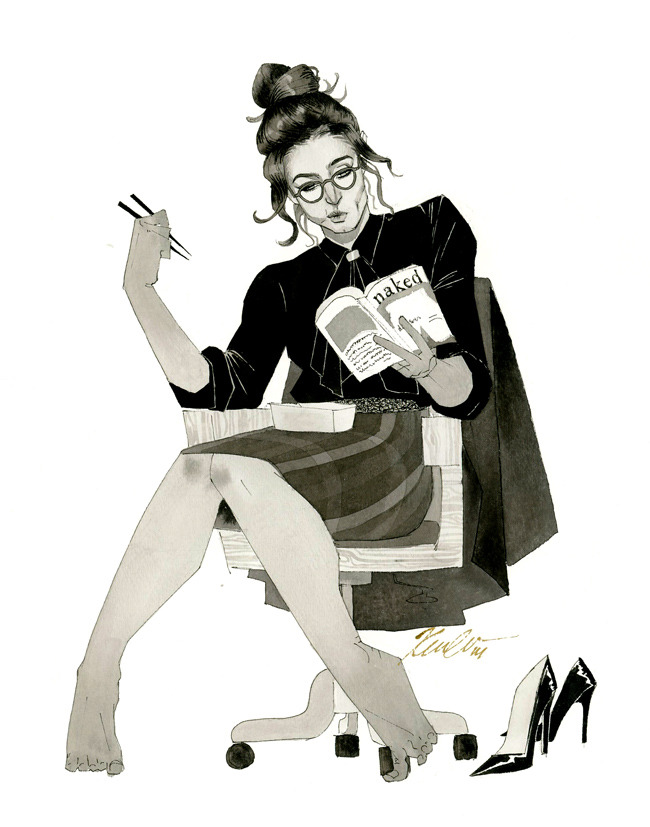 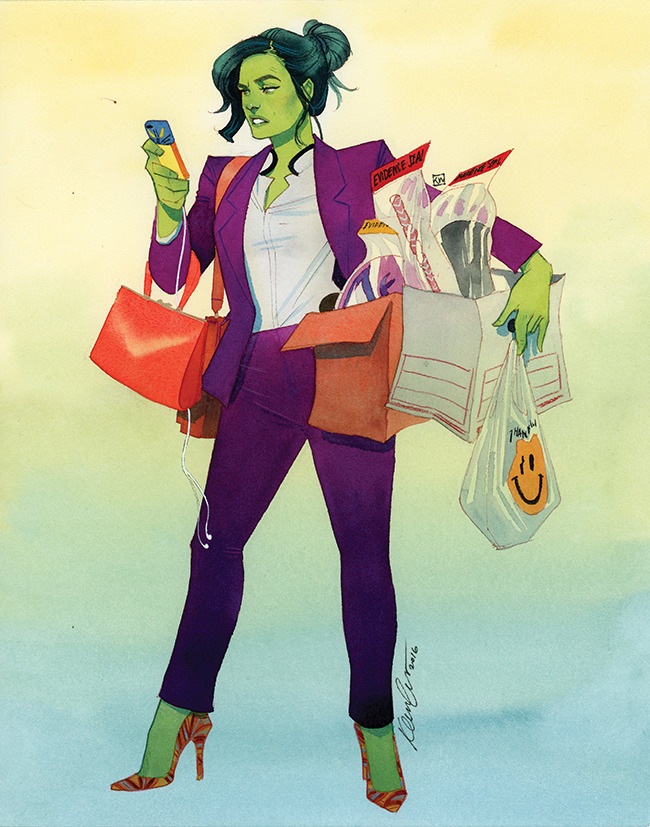 3) With sensational thanks to: David Byrne .But no actual involvement in the series. Byrne built much of the foundation of She-Hulk's character, but looking back too much of it feels like a teenage boy's fantasy of this sexy superhero. 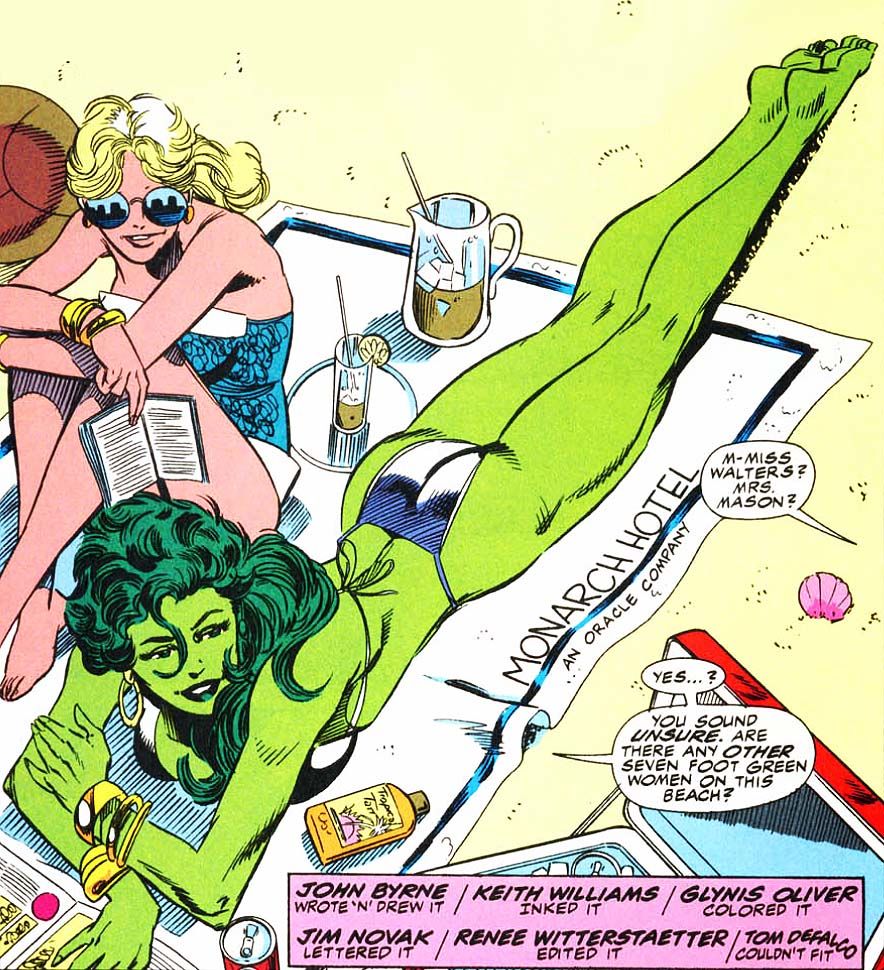 4) Casting: I have no idea. I do think the 1990s idea of Brigitte Nielsen was terrible because I cannot imagine her bringing any fun to the role. So I hope for an actress who projects light-hearted fun, and comfort and confidence with her powers and appearance.

5) Tie-ins to other Marvel tv series and movies? I hope She-Hulk will make it from small screen to big screen. But I don't know the current status of her movie rights. Does Marvel own all her rights, or was some of it tied up with Universal's Hulk rights?

What do you think about the idea of Angie Harmon as She-Hulk? She expressed interest in playing her several years ago.

hbenthow said:
What do you think about the idea of Angie Harmon as She-Hulk? She expressed interest in playing her several years ago.
Click to expand...

That's a funny interview. She definitely has the enthusiasm for She-Hulk.

I guess it depends on whether the series will show She-Hulk all the time (a tall muscular actress may be the obvious choice), or a back-and-forth between Jennifer Walters (played by a less-imposing actress without CGI) and Shulkie (using CGI the same way that Ruffalo was professor Hulk in Endgame).

Tatiana Maslany has been cast as Jennifer Walters/She-Hulk.

To share in the anticipation of She-Hulk coming to Disney+ in 2022, I'm sharing my She-Hulk Playlist. 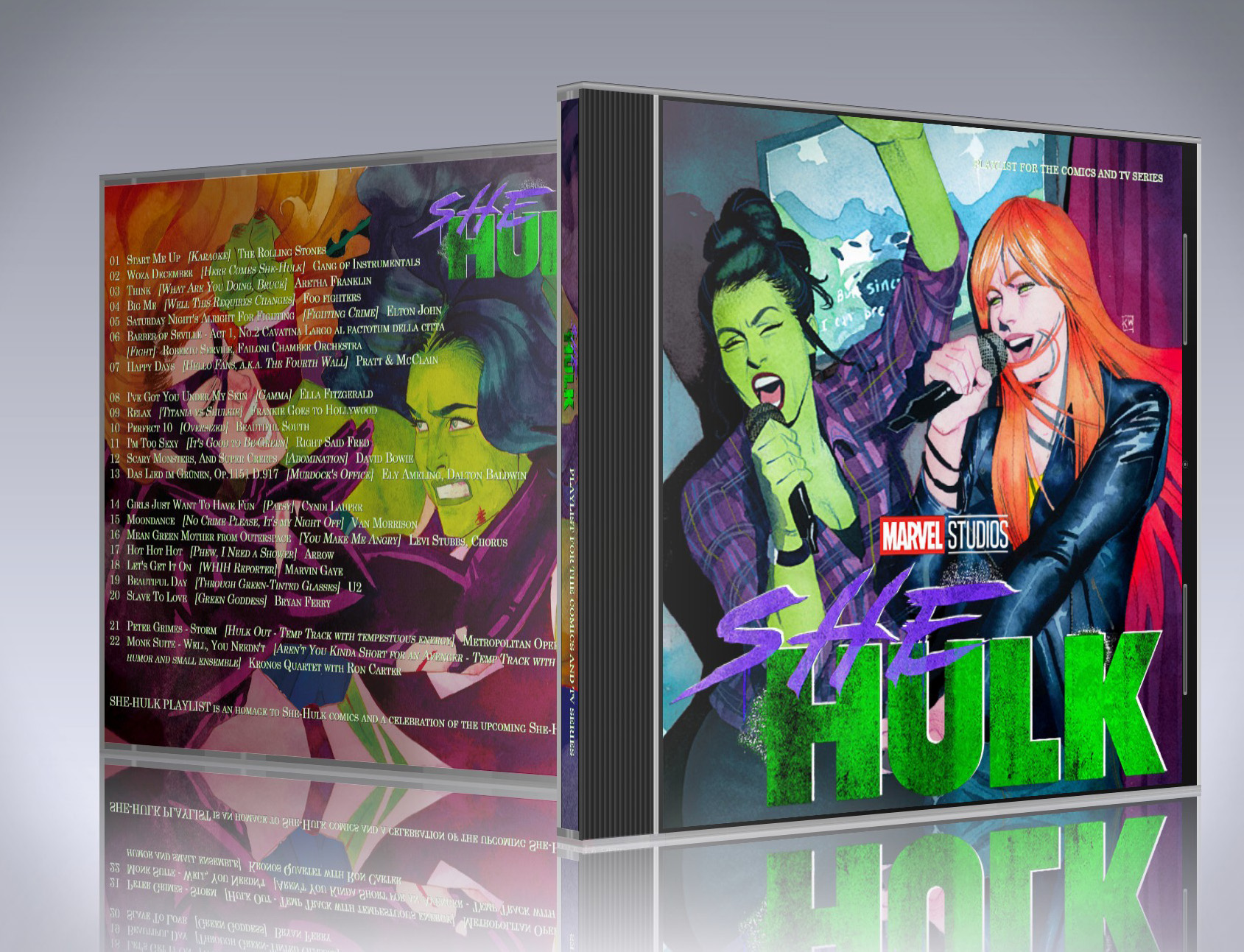 Obviously this playlist is not informed by the actual series, as it's not out yet. Let me therefore explain my sub-titles.

01 Start Me Up [Karaoke] The Rolling Stones : Look at the front cover. She-Hulk enjoys karaoke. Nuff said.
02 Woza December [Here Comes She-Hulk] Gang of Instrumentals : This could make a great theme for She-Hulk. Lots of upbeat energy.
03 Think [What Are You Doing, Bruce] Aretha Franklin : The blood transfusion is so significant in the origin story that it deserves a song. Plus, Bruce deserves a direct reference in a song [Mark Ruffalo comes to the small screen for this!

]
04 Big Me [Well This Requires Changes] Foo fighters
05 Saturday Night's Alright For Fighting [Fighting Crime] Elton John
06 Barber of Seville - Act 1, No.2 Cavatina Largo al factotum della citta [Fight] Roberto Servile, Failoni Chamber Orchestra : I'd LMAO if a She-Hulk fight is shown as cartoonish violence with incredibly hard punches but little impact, a la Tom & Jerry beating each other to a pulp but being fine again in the next shot (showing the absurdity of invulnerable individuals duking it out).
07 Happy Days [Hello Fans, a.k.a. The Fourth Wall] Pratt & McClain : Obvious. If not, buy more She-Hulk comics!

08 I've Got You Under My Skin [Gamma] Ella Fitzgerald : An beautiful song to underline Jen's acceptance of her new fate.
09 Relax [Titania vs Shulkie] Frankie Goes to Hollywood : Titania deserves a song, and this one's pretty spot on for beating each other up. [Jameela Jamil plays Titania!

]
10 Perfect 10 [Oversized] Beautiful South : For everyone who became a fan during Byrne's tenure.
11 I'm Too Sexy [It's Good to Be Green] Right Said Fred : Well, duh! I mean, surely you can picture She-Hulk singing this out loud?
12 Scary Monsters, And Super Creeps [Abomination] David Bowie : Abomination deserves a song. And this is perfectly on the mark. Extra points for the funny counterpoint to the previous song. [Tim Roth plays Abomination!

]
13 Das Lied im Grünen, Op.1151 D.917 [Murdock's Office] Ely Ameling, Dalton Baldwin : If Matt Murdock appears in the series, I imagine minimal music in his office. Something to enjoy but not distracting. If Daredevil isn't in Season 1, this music can be used in Holliway's office (or similar character).

14 Girls Just Want To Have Fun [Patsy] Cyndi Lauper : Patsy Walker is both the little devil on She-Hulk's shoulder and a true friend. She deserves her own song, and this fits the bill! [Ginger Gonzaga plays the best friend, perhaps as Patsy or a reinterpretation of that character. Either way

]
15 Moondance [No Crime Please, It’s my Night Off] Van Morrison : Imagine Patsy convinces Jen to a night out, and Jen finally unwinds.
16 Mean Green Mother from Outerspace [You Make Me Angry] Levi Stubbs, Chorus : Now imagine some @#$% villain breaking up that night out. He's going to regret this!
17 Hot Hot Hot [Phew, I Need a Shower] Arrow : She-Hulk is more in touch with the real world than e.g. Steve Rogers. He may always look and sound perfect, but in real life after a night of fighting crime, anyone would be a hot sweaty mess. Let She-Hulk acknowledge that reality!
18 Let's Get It On [WHIH Reporter] Marvin Gaye : A nod to Tony Stark sleeping with reporter Everhart in Iron Man 1. In her May 2007 comic, She-Hulk asked Tony: "How do you get away with [...] sleeping around? When you do it, everyone calls you a player. When I do it, they call me a skank. Isn't that a double standard?" 15 years later, I hope the TV series will give a satisfying answer!
19 Beautiful Day [Through Green-Tinted Glasses] U2
20 Slave To Love [Green Goddess] Bryan Ferry : She-Hulk herself insisted.

21 Peter Grimes - Storm [Hulk Out - Temp Track with tempestuous energy] Metropolitan Opera : I'm not a fan of temp tracks because they can restrict composers. That said, I think this piece fits well with the danger of an angry hulk-out.
22 Monk Suite - Well, You Needn't [Aren’t You Kinda Short for an Avenger - Temp Track with humor and small ensemble] Kronos Quartet with Ron Carter

Special shout-out to Jessica Gao for writing the TV series.