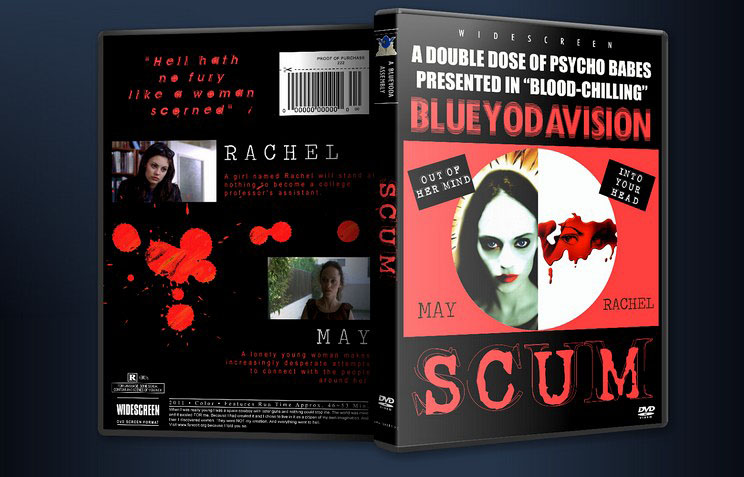 This fanedit is meant to capture the grindhouse fun of trashy horror films without necessarely going thru the scratching of the image and other tricks. I took two motion pictures - "American Psycho 2: All American Girl" and "May" - and reduced them to their barebones essentials, down to about 45 minutes each.

For American Psycho 2 (now renamed "Rachel) I removed almost all narration and completely changed the soundtrack to give it a slightly meaner edge. I also removed all references to Patrick Bateman and changed the title, knowing that this movie was a sequel in name only forced upon the film makers by the producers. The original script was a stand alone horror movie.

For May, I did the opposite and tried to give it an overall lighter feeling by changing the soundtrack to the Viscount&#8217;s &#8220;Harlem Nights&#8221; (see the trailer for the mood I was going for), as I felt the original movie took itself a little to seriously. This brought it closer in tone to &#8220;Rachel&#8221;.

Of course with so many parts of the movies gone (about 40 minutes slashed off each movie) the plot moves along pretty fast. I hope I managed to find the right balance of what to cut and what to keep and still end up with movies that made sense. If I didn't succeed, well, it doesn't really matter because that was not my primary intention with this fanedit. If you think you find a plot hole somewhere, just tell yourself that it's all in those psychotic women's heads.

I'll be reuploading this one to Mediafire and Usenet. In the meantime you guys can watch that trailer over and over.

Surprised to see how few posts this thread got. This double feature is great fun, and everyone who's a fan of bad girls (and who isn't?) should check it out.

Dwight Fry said:
Surprised to see how few posts this thread got.
Click to expand...

These chicks are seriously nuts. And their inner/outer torment is your ticket to some messed-up entertainment. The humor is wicked, and so is the pacing. The original films' fat has been cut away, so to speak, and the rescoring is hipsterly marvelous. If this is BlueYoda's tribute to his past/future/alternate-universe girlfriends, then I'm glad he's survived them.

Be sure to check out the similarly-themed trailer for Amelie. Ain't yo father's, dat for sure.

I think Excision or The Loved Ones would have been a better choice than American Psycho II.

theunbeholden said:
I think Excision or The Loved Ones would have been a better choice than American Psycho II.
Click to expand...

You're a bit late.