Brief Synopsis:
An improbable couple meets after high school graduation and must deal with their friends, family, and other pressures just to stay together.

Finally, a fanedit you don't have to force your wife or girlfriend to watch.

Intention:
To add in the deleted and extended scenes to one of my favorite movies. In doing that, some of the character arcs feel more rounded out.

Editing Details:
At first I contemplated doing a kitchen sink Extended Edition, adding every deleted or extended scene and using alternate takes. In the end I chickened out on the alternate takes (there is 1 alternate scene) as I couldn&#8217;t cut some of the iconic moments.

Lloyd in the rain on the phone with Constance. Replaced it with the version in the Alternate Scenes.

Montage of Love Clips &#8211; I only added the scenes of Lloyd and the elderly. I didn&#8217;t add the kissing in the rain extended take.

Sims Questions Court At The Home &#8211; Only the second half was added.

Alternate Scenes I Didn&#8217;t Have The Nerve To Use:
Lloyd & Diane Outside Karate Studio
Diane in Bedroom
Lloyd with Boombox
Additional Notes:
Like a lot of deleted scenes, these aren&#8217;t the greatest quality. Nothing terrible but they&#8217;re noticeable. And I had to repeat a shot when cutting in one deleted scene. If I hadn't said anything, would anyone have noticed? Will anyone watch this?

Special Thanks:
njvc for being an awesome musician. 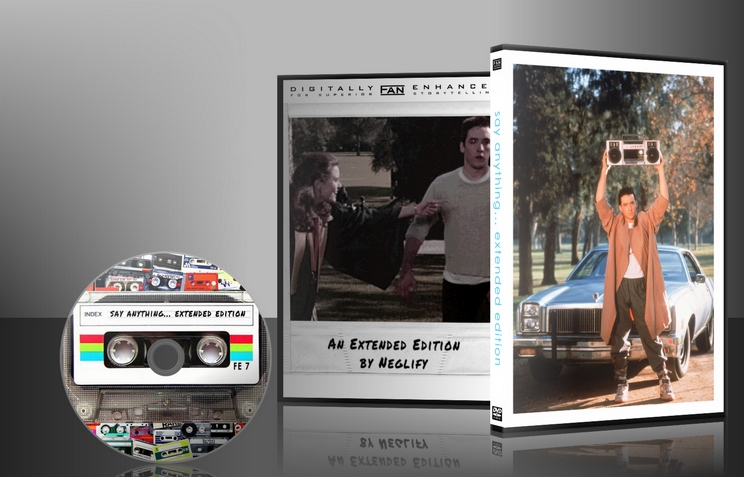 Neglify said:
The audio for the deleted scenes are in 2.0 and some of the sound mixing a little rough. In some of the scenes I added some 5.1 ambience/music tracks but not all of them.
Click to expand...

Is it weird that the first thing that popped into my head when I read "He Hurts Me" is Junior from Friday The 13th: A New Beginning riding his dirtbike around the house, crying, and saying "He hurt me ma! He really hurt me!" ?

That disc art is really sweeeeet!

The 2.0 track (which is 95% dialogue, 5% ambience) goes in the center channel. Ambience music or sounds go in the Front and Rear channels.

Thanks. Download the full cover art to see some of the titles of the tapes better.

Warning: do NOT play the below video!

Count me in. Awesome dude. Love finding surprises like this.
S

eeenteresting, dude. didn't see the original, so this should be a surprise through and through.

Thanks ssj, I hope you like it. And hey, what do you know, it's a fanedit you can watch with your wife.

awesome, man. it's mystifying to me, but she likes chick flicks.

AVI is on Mediafire, should be on Info soon. Also will upload DVD and AVI to Usenet in the coming days.

wait... did I misunderstand the thread's title?


And now I re quote the last neglify's post because I don't want my silly comment to ruin the news:

DVD was taken off Mediafire. Won't reupload to Mediafire. Will upload to Rapidshare, Usenet and Megashares.
Click to expand...

"Say Anything Extended Edition A Neglify Fanedit DVD5" has been uploaded to Usenet. NZB submitted to Info, should be up soon.

"Say Anything Extended Edition A Neglify Fanedit AVI" is now on Usenet. NZB has been submitted to Info.

about 40 min in, and i'm really enjoying this. how did i miss this movie back in the day?

oh, yeah, i was studying.

This is a charming movie that gets its charm upgraded by the addition of multiple deleted scenes. The added footage is notably different in visual quality (lighting, graininess) but tonally fits the rest of the film by allowing you to see better where the characters are in their emotional journey. Fine performances by all the cast and very little cliche make this romance more than a mere teen romcom, and Neg's version fleshes out the characters to make a likable movie even moar likabler.