kchrules said:
with the picture suddenly getting brighter, I think it's like the coke factory where that's just part of the movie.
Click to expand...

You're right, just checked. I think it's the glint off the wheel rim as it whips past, shining right into the camera. The grade on the blu-ray highlights it more than the Criterion DVD.

kchrules said:
So, there is an out of print, unreleased Blu-Ray of the theatrical version. It's been floating around the internet for years. It was pulled by Sony days before it would hit shelves but some reviewers and others got their hands on it. It's extremely rare. The only commercially available Blu-Rays are the Director's cut. Is this unreleased bluray footage fair game to use in this restoration? I do own the theatrical version on VHS, Laserdisc, and 3 separate DVDs, so it's not like I don't own a copy of the theatrical version, but a physical copy of the unreleased blu-ray is damn near (if not) impossible to find. I'd only be using about 10 seconds total (Bobby getting shot in the leg, Murphy getting shot up in the steel mill) for consistent quality.
Click to expand...

kchrules said:
IFC broadcasts the Theatrical Version unedited in HD so I might be able to get the theatrical footage from there instead of the un-released blu-ray
Click to expand...

Sorry it's taken a while to reply to this but after we debated your questions, we decided to allow it... just. For several reasons: 1. It was an official source, however few copies were actually pressed. 2. You own it in several other formats. 3. It's only 10-seconds. 4. The same transfer has been freely broadcast in HD on TV, so it's not like the studio don't want the footage being seen.

Only the 10-seconds you need should come from this unreleased blu-ray, or HD TV capture. The Director's Cut blu-ray should be the primary source for this edit. People wishing to watch this edit should also own that DC blu-ray and the Theatrical cut in some form, to be fair to the copyright holders.

TM2YC said:
Sorry it's taken a while to reply to this but after we debated your questions, we decided to allow it... just. For several reasons: 1. It was an official source, however few copies were actually pressed. 2. You own it in several other formats. 3. It's only 10-seconds. 4. The same transfer has been freely broadcast in HD on TV, so it's not like the studio don't want the footage being seen.

Only the 10-seconds you need should come from this unreleased blu-ray, or HD TV capture. The Director's Cut blu-ray should be the primary source for this edit. People wishing to watch this edit should also own that DC blu-ray and the Theatrical cut in some form, to be fair to the copyright holders.
Click to expand...

Awesome, thank you. I wanted to make sure I was going through the proper channels on that one.

I have a bunch of VHS tapes coming in the mail next week. I bought them a while ago but the seller was away and they only just now shipped. They are home-recorded tapes. One of them has Robocop, I'm hoping its some form of the TV edit. In the mean time (hopefully by the end of next week) I'm gonna try to get a rough cut of this whole thing compiled and uploaded for everyone here to see.

Used VHS ended up being a dud (theatrical version). I got the first rough cut compiled, there is still A LOT of fine tuning I have to do (missing sound effects/choppy music in some places/incorrect p&s/color correction etc), I am happy with how this is turning out though. I have a laundry list of things I still want to/need to fix, like I need to remove some logos still and need to insert some footage from the laserdisc since it has some open matte shots with Robocop's HUD that are cut off with P&S, but I want you guys to see this working cut and offer any suggestions you might have:

So there's about 4 shots of alternate footage that I am unable to track down on any version played on TV or floating around the internet. There is only a low quality youtube video with a compilation of alt shots ().

Some of the footage I'm including in my edit is low quality yes, but I didn't want these clips to clash too harshly. So it wasn't too jarring, I edited the yt footage against the laserdisc footage. It's higher than VHS but still low quality enough that it could feasibly work. This clip is still a little rough, just testing the waters. Thoughts?

Sorry I haven't been posting many updates, my personal life is a hell of a lot busier now, but I'm still working on this project. I have some updates to announce though. The finished product will have at least 2 Audio tracks. As you know there are multiple takes of different dubs across the different versions (i.e. "stupid stupid dufous" and "stupid stupid moron", "lousy safe" and "stupid safe") the tracks will be very similar but instances like that will be different. I want to include as much censored content as possible. Also I've been editing the sound in 2.0 stereo, since that's how it was ripped. I recently re-ripped the movie with it's actual 5.1 (6-track) surround sound. The dubs will be MUCH easier to plug in and it will have an overall boost in quality. I want to have this thing finished soon, but I also don't want to put out a half baked product that I'd be unhappy with. This also gives me a chance to go back and edit some of the base movie's footage tighter to what it actually is in the edit (something else I was unhappy with in the previous edit). And the alternate footage/audio is already cleaned up anyway so it shouldn't take too long to put this back together.

Still piecing together some alternate footage and dialogue. Got my hands on the 2002 R4 DVD. It has the director's Cut outtakes. I was able to get a decent quality clip of this alternate shot where the thugs are shooting murphy with no watermark: 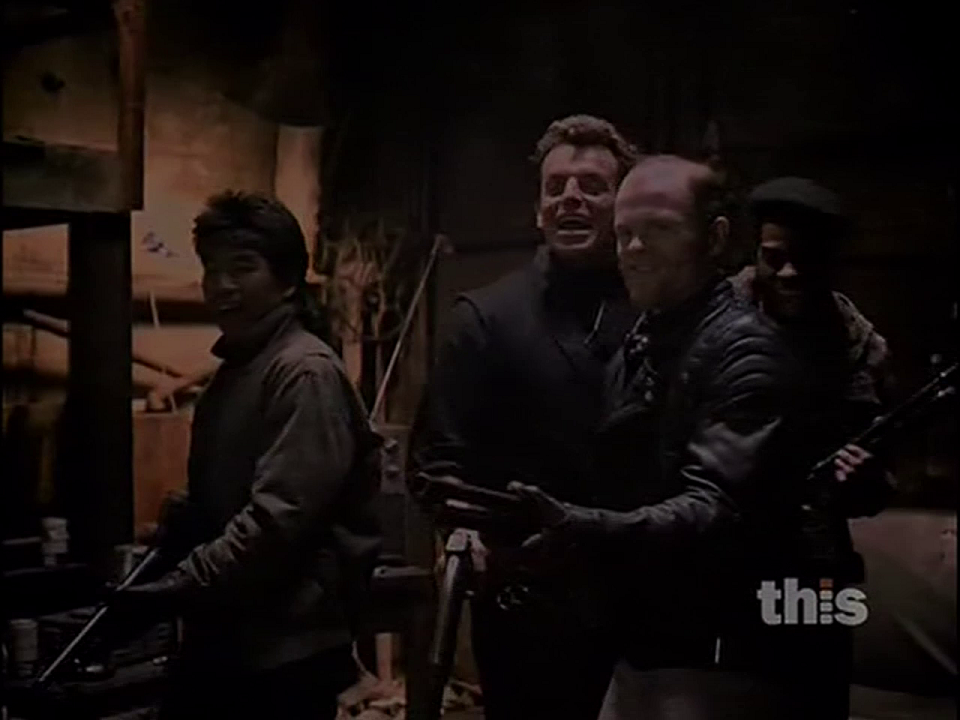 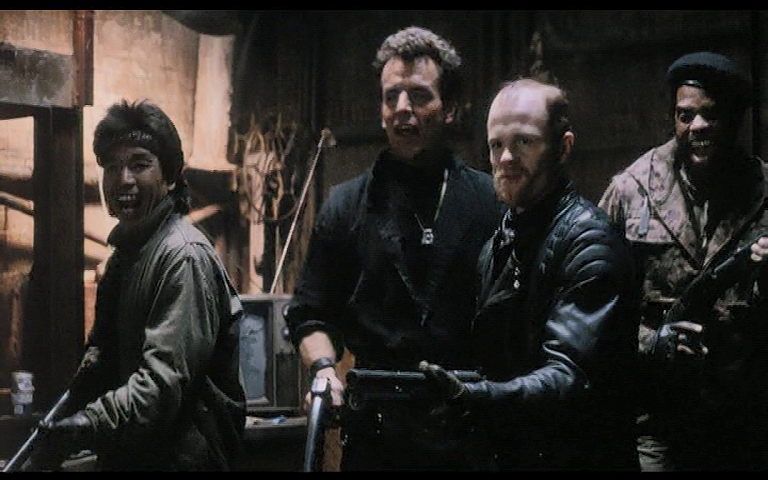 I know updates are sparse now, but I'm still working on it whenever I can. I have 2 home recorded tapes of Robocop coming in the mail soon. I'm hoping they have the alternate footage I need (or some old alt footage in better quality)

Also this is really choppy and not touched up very well as I threw it together rather quickly, but here is the "optical bra" that I cut out from an upscale of one of my tapes and frame by frame inserted into the shot:

Starting to float off a bit at the 0:02 mark, but she's almost out of shot anyway

You should do some more work on getting the shot lined up better in each frame (Don't try to just line up the bra, line up the whole shot and the bit you want to matte out should match up too) but also due to how fast it is moving, you can afford to feather around the area much more and that'll help hide the imperfections.

Excited for this project, kch!

Don't know if it's helpful or not, but my own PAL Robocop VHS runs 3 minutes shorter than the Theatrical cut at 99 minutes. Is it worth ripping to see if it has anything usable or to see what's been cut?

Bobson Dugnutt said:
Don't know if it's helpful or not, but my own PAL Robocop VHS runs 3 minutes shorter than the Theatrical cut at 99 minutes. Is it worth ripping to see if it has anything usable or to see what's been cut?
Click to expand...

I don't know if there's any alternate/cut footage, but I'd definitely be interested in seeing it. I know the german VHS has some cuts, but I don't know about some other PAL regions

Hey everyone, I know I haven't posted many updates recently. My personal life/work/family commitments have not left me as much time to work on this as I had about half a year ago. I am still working on this project and have been working on it little by little as I've been able to. I've also been collecting as much extra footage as I can. However, a few people interested in this have told me they aren't sure where my progress is with this project. So here is an update of where I am, and when I plan on being done:

I am pretty close to being done with the 2 audio tracks. The ITV edit track (current version still shown on TV and original UK edited version as well) is 95% done. All the dubs are in and cleaned up. I just have to edit the music and add sound effects in places where there are none (such as the alternate toxic-melted Emil scenes) or the music is choppy otherwise. The ABC US Network track will be very similar to the ITV version, since they share some of the dubs, but there are alternate takes of dubs and different dubs all together. Plugging those dubs in won't take very long.

The Video is conservatively 70% done. The whole movie, at its base is edited down. I'm adding in alternate footage. One of the problems with the footage added in is its color. The movie has gone through many color corrections over the years. The 2014 blu-ray (which the edit is based on) has the most accurate color palette to the theatrical version on old VHS, Laserdisc, and DVD releases. The 2001 dvd and subsequent (cancelled) blu-ray and HDTV masters have a blue cast. Some of the higher quality TV footage I have was color corrected to that blue tint and I'm trying to make it closer to the blu-ray. Which isn't as easy as applying a color filter (as I'd hoped), in some instances I have to go through frame by fame and correct the palette of skin, backgrounds, clothes, etc. A handful of these shots are less than a second and stationary so it isn't a huge undertaking, but some of the longer shots take longer. Also some of the alternate footage of more obscure edits are in such bad quality, I'm attempting to "re-create" these, either compositing the edit into a still of a similar frame, or major DNR and Sharpening. I'm happy with how these are turning out through, and hope to share some examples soon. I also need to go through and pan and scan certain parts as well as creatively remove station logos.

My goal is to get this whole thing finished by the end of this year at the latest. I started this as a little pet project last year and had no idea it would become this popular and so many people would be interested in it. Thank you guys so much for the support, it really has kept me going on this project.

rare x-rated cut of Robocop now streaming on amazon prime
but its not listed as such.

jswert123456 said:
rare x-rated cut of Robocop now streaming on amazon prime
but its not listed as such.
Click to expand...

Just checked. I've seen articles about it shared online. Yes its the unrated version, but it isn't rare. It's identical to the 2007 Blu-Ray unfortunately.

jswert123456 said:
im just going by what the article called it. and the article referred to it as rare,
Click to expand...