I guess this is the right place for this thread, as it's a question for the preservation and restoration experts on this forum.

One of the best Blu-Rays of recent times was the Scorcese backed restoration of 1943's 'The Life and Death of Colonel Blimp'. Surely one of the top ten greatest films ever made. I heard there was another film by John Boulting called 'The Magic Box' that had a similar flavour to Blimp. Which indeed it does, also a similarly elegant flashback narrative structure and cinematography. The movie is a biography of Cinema pioneer William Freise-Greene and is beautifully sad. It was shot by long-time Archers collaborator, the great Jack Cardiff.

When I tracked down a DVD of this little known film I was hugely impressed with the production but was disapointed by the transfer. It is clearly down to being scanned from a mis-aligned 3-strip Technicolour print (By accident or by variable shrinking of the seperate colour records). The scan looks quite sharp for a DVD but in certain scenes the colour ghosting is very bad. I wanted to know if there is any software that can improve this sort of thing by seperating out the colour spectrum and realigning it. I feel this is a really important film but I can't see it getting professionaly restored anytime soon.

Here are some screen captures of my DVD for reference...

^ The colours are really vibrant in places.

^ The closeups have some great detail (The film's star Robert Donat).

^ And again here (Michael Hordern is a God!)

^ Ironically, there is a scene where Freise-Greene is trying to correctly align one of his colour experiments.

^The mis-alignment is starting to show in this shot.

^ This scene is particulaly badly aligned, feeling almost like an old-skool 3D film when viewed in motion.

This webpage has some interesting details including the suggestion that the film originaly ran to 118minutes. My DVD is 103mins but I suspect with 4% PAL speedup that I've got the 108minute cut. 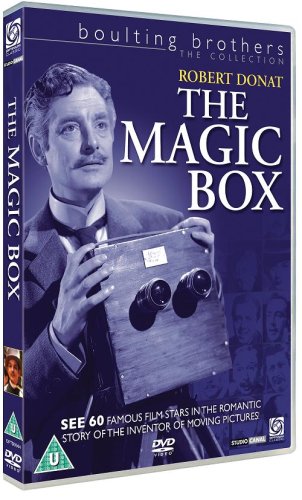 ^ Click to buy from Amazon if you want to find out more.

Thanks for the recommendation! I haven't seen this one and looks like it's right up my alley. Shame about the lousy copy available.

Dwight Fry said:
Thanks for the recommendation! I haven't seen this one and looks like it's right up my alley. Shame about the lousy copy available.
Click to expand...

Don't get me wrong, the UK DVD is actually a very good scan, but a scan of a flawed source. When the source looks good (About 50% of the time) this DVD looks great. I wouldn't let it put you off seeing this one. For some technical reason I don't fully understand, 4:3 Technicolour films from the 40s and 50s look magnificent on Blu-Ray (Sharper and richer than any modern movie) so I can't help dreaming about a restoration of this one. An American DVD is also available but I couldn't tell you if it is the same, better or worse.

Obviously I've posted screencaps showing the flaws, I could post another 20 of it looking lovely. I have Blu-Rays that don't look as good as those two closeups ^ lol

The Amazon.com listing suggests that the US release seems to base it's cover on the beautiful original poster... 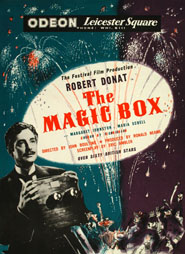 Since I started this thread in June I've practised my colour correction skills alot more, so might have a go at improving this film. There isn't much I can do about it being a SD copy of a faded and mis-aligned print but I can do alot with the colours and a bit of sharpening and grain would help too. It did a very rough correction on 5 mins of the film to what could be done...


^ The CC is a blanket one across the whole video, based mainly on the bedroom portion, so some shots look better than others. If I do this properly I'd need to CC most shots individualy to compensate for the film's uneven fading, discolouration and damage. I've added a little grain and sharpening but you can't really see it in the upload.

It would be nice to present this 'forgotten' film to a better state than it is. I couldn't claim it was a preservation or restoration since I've no refrence to compare it to. So it would just be my own judgement as to what it should look like.

hmmm, if I had to choose between the two, I might lean towards the original. The CC version is shifted too far to the red, IMO, and the loss of detail from crushing the blacks is a bit much. Something a bit subtler might be more fitting.

ThrowgnCpr said:
hmmm, if I had to choose between the two, I might lean towards the original. The CC version is shifted too far to the red, IMO, and the loss of detail from crushing the blacks is a bit much. Something a bit subtler might be more fitting.
Click to expand...

Yes a bit too red, the sickly faded yellow/green tint has gone but so has some of the contrast too. Plus the whites are a tad too blue. I shall be do much more experimenting on this one

I've ripped the DVD to my HD and started having a proper go at the CC shot-by-shot. Here is an example of the kind of problem I'm going to try to fix...

You can see in the original ^, as we cut from Robert Donat's back to his front the whole colour changes. In the first shot the film has faded towards blue/green but the next frame of film has faded heavily to sepia. Notice how his coat and the pillars of the building change from grey to brown.

In the test on the right I've brought up the saturation, added a little sharpening, lightly colour corrected the first shot and heavily corrected the second to try and make it match the first. Now the consitency of colour of the two shots and the coat/pillar is much improved IMO. Still ideally needs to be less green and more blue in the second shot but it's hard not to disturb the skin tones too much.

The whole film is like this (And this opening scene is one of the better looking portions).

That looks better.
Definitely an interesting project you have going.

Vultural said:
That looks better.
Definitely an interesting project you have going.
Click to expand...

Good to hear. I've finished a preliminary colour correction of the entire first 5 minute scene. This time shot by shot. I've boosted the saturation overall to richer Technicolour levels, tried to maintain consistent colours and hopefully brought back some of the badly faded skin tones...


This scene forms the top layer of the flashback structure, from here the narrative progresses back and forth across several time layers... a bit like 'Inception' ;-). It's a really elegant way to tell a story actually.

This will raise the hackles of others, but I think you are correct to kick up the saturation.
That was what Technicolor, especially early Technicolor, was all about.
One of my favorite Laserdiscs remains The Adventures Of Robin Hood (Errol Flynn).
I bought the DVD as soon as it was released, and was crestfallen how the hues had been toned down.
Much more realistic, to be sure, but the costumes and jewels in the LD simply glowed!

When you are tweaking, however, watch the red levels.

Vultural said:
When you are tweaking, however, watch the red levels.
Click to expand...

this. I wasn't crazy about your still images (I felt they were pushed too far to red), but the treatment in the video works really well.

That scene is really hard with all the strong emeralds and reds of the decour, Margaret Johnston's dark blue coat, Robert Donat's grey coat, trying to keep the blue under control in the window and still try to bring out the faded skin tones.:x

I'll go through it again and take some red out.

I've not done any more on this project yet but hope to one day.

Just posting to say that I suddenly found the film is available to stream on the BBC iPlayer for UK residents, if anybody is interested in seeing this obscure but wonderful film about the birth of cinema:

I'm affraid it is sourced from the same DVD I was trying to improve (I had my hopes up for a moment that it would be a new source ;-)) and is only available for about 4 more days.

Will play in UK only.
Bummer.