yes, only here will we call a television channel Dave. :smile:

Ghostcut said:
yes, only here will we call a television channel Dave. :smile:
Click to expand...

I know, that's funny. I turned my nose up at that channel just because of the chavy name, but it's got all my favourite programs so I love Dave now. :smile:

I'm betting the female version is gonna be called something like Trisha. :-D


Ghostcut said:
This signature has been removed due to a copyright claim by the MPAA (BayTSP)
Click to expand...

You've got to wonder how they'll cover the return to Earth in 2 episodes..... :?

They have to tie up what happened at the end of Series 8 yet.....

But at least 'Dwarf will get a finish at long last.....

known about this for a few months but that info has got me chomping at the bit, never have i looked so forward to a religious holiday

I can't believe this was in the pipeline for so long & I didn't know. I was a MASSIVE Dwarf fan as a teenager but 7 & 8 put an end to that sadly. I did follow the news on a possible movie but when that came to an end I stop following the news on the show, so this has come out of nowhere for me.

yes it'll be good if Chloe Annet dies as soon as possible! if they are going to have a Kochanski they have to get Claire Grogan back period.

i didnt actually hate 7 & 8 i think there were at least 3 or 4 good episodes in there, my main problem is im not a huge fan of farce and they did push the silly button a bit too much for my liking. still, it could have been worse, look at Hyperspace that was simply bloody awful. i cherish 7 & 8 compared to that laughless pile of old dog turds.

As I understand it - Naylor tried to get the movie going for years with little success - but then saying that, I remember reading the synopsis for the movie and it was totally different to the TV show.

BBC turned down Naylor for a series 9 early last year (Boo), so it looks like either Dave or Naylor sought each other out. At last.

yes, she may be a tad more pert, but shes a shit actress and does nothing for the part of kochanski. 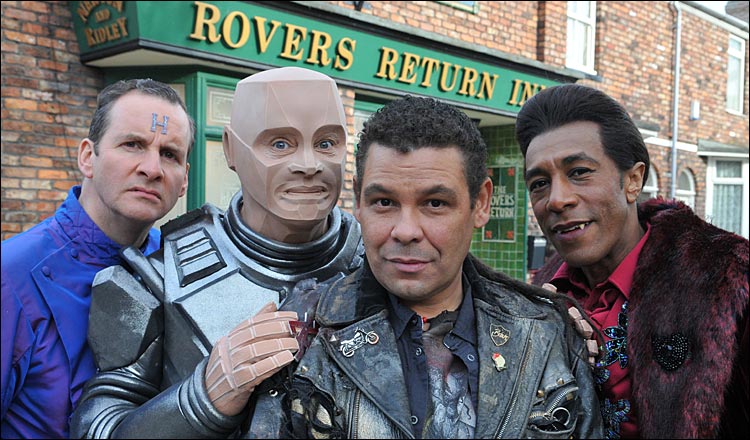 Important Spoiler, something all Dwarfers have been waiting to hear since Series 7.
[spoiler:1f4s7un3]Kristine Kochanski is dead & not in the new episodes!!![/spoiler:1f4s7un3]

That's a bit of a shocker.

FatherMerrin said:
Important Spoiler, something all Dwarfers have been waiting to hear since Series 7.
[spoiler:3h1hehm8]Kristine Kochanski is dead & not in the new episodes!!![/spoiler:3h1hehm8]
Click to expand...

[spoiler:3h1hehm8]i wonder if chloe annett held out for more money or they just realised she was a shite KK. oh well i&#39;d rather have no kochanski than Clare not reprise her role[/spoiler:3h1hehm8]

Ya know - I'm actually a bit worried with a 2 episode finish to RD.

It needed much more than that IMHO.

I really don't see how they're going to do it. How do you wrap up the ending to Series VIII?

Or do you think they'll do what they did with Series 3 and have a massive Star Wars trail?

Totally agreed! its gonna be difficult to get everything tied up in two,but more than anything else we just want MORE episodes.

its a shame the BBC turned Doug down for a new series last year although hopefully if the two new episodes work they might be able to persuade him to do the whole series on Dave.

It's now turned into 3 episodes. :smile:

It started out as 2 proper episodes, 1 live episode & a documentary. As usual Doug Naylor got carried away & turned it into 3 normal episodes & a documentary, but fair play to Dave for letting them do it.

white43 I think you're right with the Series 3 Star Wars trail. It's not the 1st time they've made a massive leap in style & content, so I'm hoping for a similar situation here.

My only concern is that I read it's not being filmed before a live studio audience, so no laughter track.

Dave is promoting this big time, so if it does well we might end up with a new Series first shown on Dave then repeated on the BBC!!! :lol:

/me does the Chandler Happy Dance(TM)

On 20 February 2009, it was announced that Red Dwarf: Back to Earth would now be a three part special and that the unplugged episode had been postponed. Unplugged had been described by Craig Charles as "just the four of us - and some chairs - trying to improvise, or rather trying to remember, classic scenes".

[spoiler:2zjpeq1v]Plot-wise, lead-actor, Chris Barrie was reported as saying, "Yes, Lister's dream is about to come true. But like everything in Red Dwarf, nothing is straightforward." On 4 March, 2009 it was revealed that actress Sophie Winkleman would be playing a character called Katerina, a resurrected hologram of a Red Dwarf science officer intent on replacing Rimmer. Further plot details were explained in issue 181 of British Science Fiction magazine, SFX. The episode is set 9 years after the events of "Only the Good...", Kochanski is dead and Holly is offline due to water damage caused by Lister leaving a tap running. On 11 March 2009, the official Dave blog posted a brief synopsis of each episode, however they were removed due to being released too early and replaced with an apology.[/spoiler:2zjpeq1v]

"Back to Earth" itself will not be filmed in front of a studio audience in an effort to help keep the plot a secret. Although this will not be the first time this has happened (for instance, series 7 was filmed entirely without a live audience), it will be the first time a laughter track is not added for broadcast. It will also be the first episode of Red Dwarf to be filmed in High Definition.
The specials will be broadcast over four nights starting on Friday, April 10th 2009. It will then be released on DVD on 15 June 2009.

[spoiler:2zjpeq1v]"Back to Earth (Part One)" April 10, 2009
Nine years later (after the events of Only the Good...) the Red Dwarf crew are older but still none the wiser. Lister&#39;s busy day of annoying Rimmer is interrupted by the discovery of a dimension-hopping leviathan in the ship&#39;s mile-deep water tank.

"Back to Earth (Part Two)" April 11, 2009
Rimmer&#39;s replacement, Katerina (Sophie Winkleman), is determined to guide Lister back to his home planet. But Earth in 2009 is not everything the boys had expected, and Rimmer has no intention of being replaced.

"Back to Earth (Part Three)" April 12, 2009
Knowing they are destined to die, the Dwarfers - in best "Blade Runner" traditions - track down those responsible for their creation to plead for more life.[/spoiler:2zjpeq1v]

Fantastic info there white!! i think im actually MORE hyped about this now i know a little of whats going on.