This weekend, I started watching the 2001 The Tick series. When I was younger, I watched the animated series a lot, and I'd seen the first episode of this series at one point, but I finally decided to fully dive in. It's really something. I think I love it. I have no idea what to say about it, this show is weird. In some ways, it reminds me of the Clerks animated series, but I can't exactly place why.
I've heard that the new series isn't great, that it's too serious and doesn't capture the spirit of what The Tick is all about. I'll have to check it out when I'm done with the 2001 series.

Give it some time between the two. I made the mistake of rewatching the first ep of the old show before watching the only available (at the time) ep of the new show. It might ruin the new show for you if you don't have a palette cleanser between. I could not stop comparing.

I like all  three TV versions of The Tick but never could get into the comics, which is surprising because that's where it all started.

My complete 2001 The Tick review (spoiler-coded in case one doesn't care at all):


Keepers
1. Pilot: very funny, and a Christopher Lloyd cameo to boot!
2. The Terror: wonderful follow-up to the pilot; inventive and laugh-out-loud funny.
7. The Funeral: Risque and engaging, though the b-plot isn't quite as strong as the a-.
5. Arthur Needs Space: The send-off gag falls flat, but the rest is very funny indeed.

No, Thanks
3. Arthur, Interrupted: worth a watch, but only one. Promising premise, uneven results.
4. The License: intermittently fun non-origin story, but ultimately too light on plot.
6. Couples: That was Ron Perlman? Snore. Skip entirely.
8. The Tick Vs. Justice: intriguingly dark, but too many loose ends, and nary a joke.
9. The Big Leagues: some great elements and funny Superman jokes, but too predictable.

Ultimately, IMO, if you love the Pilot and are willing to sit through a few uneven twenty-minute stretches, "Couples" is the only ep not worth even a single viewing.

I've only watched the first 5 episodes so far, and personally I think 3 and 4 are my favorites, with 2 being my least favorite so far, though still good.

Just watched the freakiest scene from the Sopranos, and for all the wrong reasons.

Been watching alot of Gunsmoke lately.  Great show.  I love westerns,  and this is a great loooooong running series. The lead character isn't sexist,  the messages are anti racist, the native Americans aren't portrayed as savages, and they somehow manage to portray all these positive messages in a classic western without losing the grit or becoming cheesy or corny or preachy.  It's gritty but positive.  Great writing.

@"jrWHAG42" , I've "finished" watching The Batman. I went through episodes selectively, skipping much of the "filler". Can't say I think it's great, but I enjoyed the two parter finale to the season. Decent story, a couple of twists, character development etc. puts it a step above the rest of what I saw.

That's probably where it ends though - although I would probably watch more, I'm not keen enough to buy the next season.

I may check out the original animated series though... I remember liking it when it popped up on TV, but I've never given it a proper spin. I was more frequently exposed to the Spiderman and X-Men animated series.

News announced in the last 2 hours: Netflix to raise prices for UK subscribers

...aaannd I've cancelled. 7 full days to binge as much Netflix content as possible .

(Gimme a call Netflix when you bring back Mindhunter and I'll reconsider ).

I think mine was raised recently to.  Given how much Netflix I consume weekly, I just accept it.

Been watching through The Sopranos for the first time. I now have 1 episode left. 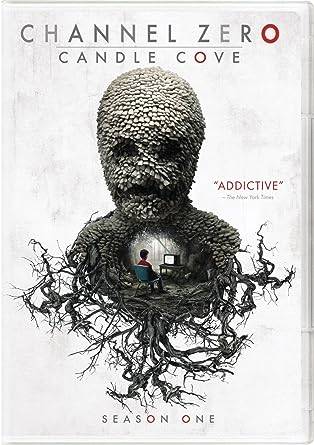 Local 58 led me down the Kris Straub rabbit hole, bringing me to this, the first season of Channel Zero.

It meanders a little bit — six episodes were probably two too much for this narrative — and Paul Schneider will never make my list of Top 50 Thespians — but I liked it nevertheless.

I heard something about the creators of the show being disrespectful towards the writer of the original Candle Cove creepypasta. I think it was something like they didn't give him credit because they didn't legally have to, or something like that. I don't remember. I'm interested in it nonetheless, it just kinda bothers me to think about that, if it's even true.

Edit: I can't find any info about that, so nevermind.

jrWHAG42 said:
I heard something about the creators of the show being disrespectful towards the writer of the original Candle Cove creepypasta. I think it was something like they didn't give him credit because they didn't legally have to, or something like that. I don't remember. I'm interested in it nonetheless, it just kinda bothers me to think about that, if it's even true.

Edit: I can't find any info about that, so nevermind.
Click to expand...

Every episode gave him credit, so that part of the claim's definitely untrue.

The first teaser for the 2nd Season of Joe Penhall's 'MindHunter' has dropped:

...and the full trailer 6-days later?


Why do they bother with the teaser so close to the trailer?

Recently watched 'The Boys' and despite my reservations about the premise ending up really enjoying it. The standout in it is Antony Starr as Homelander, it's piqued my interest in him and now watching his previous show Banshee, has anyone seen it? Its like the demon baby of Justified and Jack Reacher, utterly ridiculous with completely OTT violence, bad language and nudity but boy is it a fun ride!
You must log in or register to reply here.
Share:
Facebook Twitter Reddit Pinterest Tumblr WhatsApp Email Share Link
Top Bottom