Highlights of the edit include the following:

The opening sequence with the first Engineer has been all but replaced with the opening Ted Talk followed by a montage courtesy of Tree of Life. Holloway's douchy-ness has been seriously reduced, Shaw no longer makes faith-based decisions and Vickes' bitchiness has been mostly removed. No more exploding head and the attack on Fifield and Milburn has less idiocy on their part. The ship falls on Vickes without giving her time enough to "just make a right turn."

The original film is rife with ludicrous character choices and unnecessary, convoluted narrative points. This thrust of this edit is make the characters more convincing and the plot more accessible.

Removed part of scene in which Shaw puts on her uniform
Removed dialog, "Yes, Father."
Removed dialog concerning Shaw's protest that she never wanted her parents dead
Added deleted scene with extended interaction between the Engineer and Weyland
Removed dialog banter between co-pilots
Removed countdown to impact audio
Re-edited the falling of the ship so that it gives Vickes too little time to escape
Removed scene of Shaw lowering David's body
Removed VO
Added Title Credit
Added Special Thanks
Cover Art by beezo 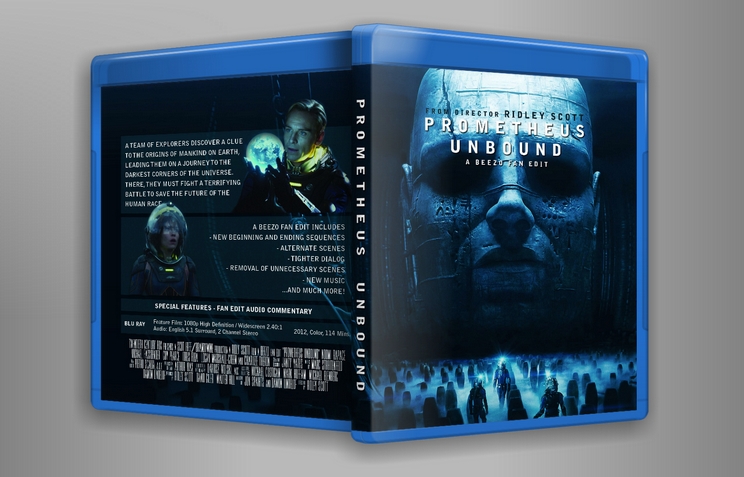 I really like what you did with the opening. I thought some time ago that "The Tree of Life" would be ripe for inclusion in here and you handled that nicely. Personally I would have done TOL, pretty much the full engineer scene and the back to the TOL for some evolution. I know it may seem like too much exposition of the obvious to some people but I really love Malnick's movie. The dinos would also provide some continuity that the fruits of the labors of the engineers run the gamut of vicious reptiles to people who may manufacture starships. My only other observation about the opening is it seems a bit of a speed bump going from the Weyland speech to space, a slow cross fade between the scenes with the music increasing in volume would probably smooth that out nicely, even a bit poetically as while he speaks of gods the visual morphs into where the gods are often thought to reside, the heavens. I haven't watched the rest of your edit yet, quite honestly as soon as I saw that you cannibalized bits of TOL I knew that I wanted to see what you did with it.

The cut between the Ted Talk and the Genesis sequence is purposefully done to feel abrupt. In the original Ted Talk, the sequence ends with thunderous, lasting applause. I cut it just before the applause, and leaving all of the built up tension preceding it. I did this in order to instill a *jolty* feeling so that when the Genesis sequence begins, there's a sense that it took place "elsewhere". Not sure if it came across successfully, but that was the intent anyway.
You must log in or register to reply here.
Share:
Facebook Twitter Reddit Pinterest Tumblr WhatsApp Email Share Link
Top Bottom