This edit is already done
This is some kind of remake of Book of the Dead, and the reason for that i explained that already in my future projects thread
This edit is faster, better and more improved as the first one


On the other hand you must see this as some kind of double feature but the "flashback" to the original is the same as in Book
Lone Wolf, Abducted, Judgment Day where fine movies to put them in one story but i did also some mistakes as Dead Walk and Robocop


The opening is the remake of course.


- The possession and the burning of the girl is trimmed (some lines are cut)
- I cut out the credits (new credits at the end of the movie)
- I cut out some scenes of the addiction of Mia, also some repairs to the cabin
- Finding the book in the basement is trimmed
- Also some trims when Eric opens the Book


From that point we have a flasback to the original:


- Credits are cut
- Shelly and Scott singing a song is cut also the almost accident with the truck is cut
- The Bridge is cut in this edit, there is no bridge
- Checking the cabin by Scott is cut
- Drawing scene of Cheryl and sound in the basement is cut
- In a few scenes after that i cut in some dialogue
- Checking the basement by Scott and Ash is trimmed
- Ash giving the necklace to Linda is trimmed
- Cheryl walking in the Woods is trimmed
- By the rape scene with the branche of the three i overdubbed that with a nice sound effect
- From that point she is already possessed and there is no turning back to the Bridge because there is no Bridge  (cut)
- Scott checking the room of Shelly is trimmed
- By the possession of Shelly some trims are made
- By the possession of Linda Ash holding a riffle to her is cut  (i recut that whole scene)
- Checking the whole cabin at the end of the original is cut
- One trim in the "rotting" scene of Cheryl
- When Ash is taken by the Demon we are back in the remake also this is with sound effects


Back to the remake:


Only in the remake some alternative footage:  (Although i put some extra scenes in the original)


- Burning a body
- Mutilating a body with a chainsaw
- A burning scene at the end of the movie
- At the end Mia walking alone on a road. (Alternative Ending)

I did not use all of the extra footage because some of them are pretty poor of quality, but the used scenes are fine with me


The last point is there is no escape in this cut.
By the original that Bridge scene was complete bullshit
When the car drives over the car is stuck, suddenly he drives away from the bridge??  and it looks like that the cabin is a few yards away from it.
So i cut all out, there is no escape in this cut they have to deal with the evil, also in the remake that the whole shit is under water that is not gonna work by me


The release is in April, see this cut and let me know what you think of it 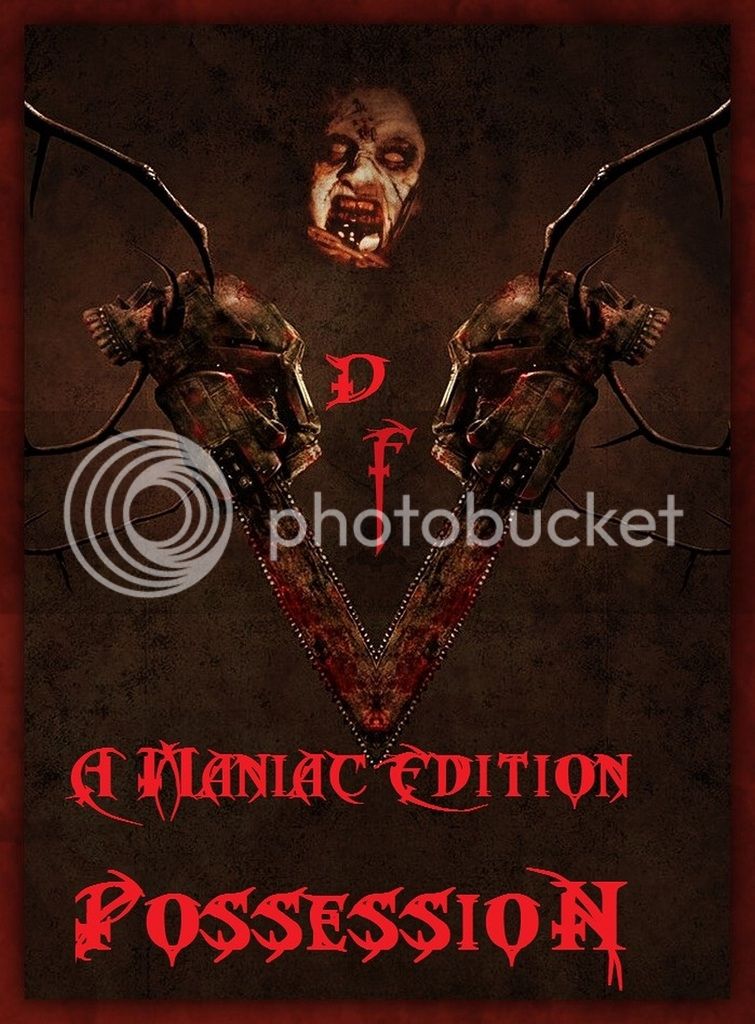 love the new cover- only thing i would've done different is to have the chainsaws cross each other a little at the bottom.

maniac said:
- By the rape scene with the branche of the three i overdubbed that with a nice sound effect
Click to expand...

Such as? See the cut man then you know it
When the branche hits her snatch i made BLAM!! sound in it
It's a single part of the music used in the remake
Maybe i am sick asshole but it works fantastic in that scene
It's a Maniac cut so you can expect this:icon_twisted:

The Chainsaws are done as the letter V
Why? i don't know...
I thought it looks great, that's the only reason

maniac said:
When the branche hits her snatch
Click to expand...

i made BLAM!! sound in it
Click to expand...