This is worth a mention. Cory Doctorow is a science fiction author, internet rights activist and super blogger. He's written a teen book about faneditors to be published in October 2012. His description says

Tor.com has published an excerpt from my forthcoming YA novel Pirate Cinema, a book set in the UK in which a gang of squatter guerrilla filmmakers take on the entertainment industry and their pals in the government to save the world from corrupt, brutal anti-piracy laws.
Click to expand... 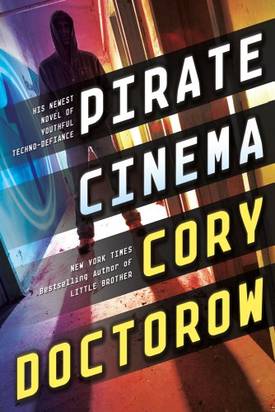 Read the Excerpt from Pirate Cinema

I don't know anything about the book except that, but I'll read it when it comes out.

Is this the first novel about fanediting?

Brumous said:
Is this the first novel about fanediting?
Click to expand...

No. Fanediting is not piracy and has nothing to do with piracy. Please no ambiguity about this at all, including tongue-in-cheek mentions.

This said, the book looks great.

Dwight Fry said:
No. Fanediting is not piracy and has nothing to do with piracy. Please no ambiguity about this at all, including tongue-in-cheek mentions.
Click to expand...

Uh, point taken so I will ask with a more focused question. Is this the first novel about people who reassemble footage from popular films to make new films for their own creativity and entertainment?

It's obvious Trent McCauley was not a member at fanedit.org.

Sounds kind of stupid and he seems to be very off key on a few things (the fanediting part being one of them, though I am sure quite a few people do what he describes, but would not be members of this particular community here. If anything that info would further shed even more negative light on this site and hobby.). Unless I hear otherwise, I would pass on this

I read Down and Out in the Magic Kingdom, doctorow's first novel, a few moons back. Some interesting ideas, but overall a huge meh.
T

I just finished reading Pirate Cinema (got it as part of the Humble Ebook Bundle) and it's ok but not great. Like most of his Young Adult stuff it feels a bit too much like an agit-prop manifesto - interesting ideas, sure, but never wavering from the certainty that his villains are villains and that his heroes, even though they might be misguided, are In The Right.

I'm in two minds about how he's handled the issue in the book - on the one hand, remix culture generally has a much slacker approach to copyright than FE (and I don't just mean stuff people put on youtube, but going back as far down as it's been possible to do remixes of any medium it seems there have been some people just doing them for fun, and some other people doing them and profiting from them unlawfully). On the other hand, encouraging people to break laws they disagree with is dangerous and not something I'm keen on. The stupidest thing of all about the whole book is that after spending the entire thing expounding on how remix culture is valid and deserves the same recognition as original content creation, and arguing against the extrapolated versions of current anti-piracy legislation, he doesn't offer any suggestion of a solution or better approach to legislation.

It's alright, but far from his best work. (Personally I still think Makers is the best thing he's written, although a bunch of his short stories are pretty good too...)

That One Guy, interesting review. I have not read Pirate Cinema yet but I still want to give it a try.

Concur with a lot of the opinions here about Doctorow. His books sound crazy mind-blowing in outline but they're lightweight in the reading, like cotton candy. The agitprop (good word) in his books like Little Brother is annoying. I'd say my favorite is Someone Comes to Town, Someone Leaves Town because some magical realism and family drama round out the thin plot.

I recently read Rapture of the Nerds co-written by Doctorow and Charles Stross. I guess they way they divided up the writing is Stross wrote the first half and Doctorow took the second half, and they each made small changes to the other's writing. Stross's half is a fine novella, a solidly crafted farce in the mode of his Halting State series. Doctorow tries to top Stross in the far-out department and fall short with his gimmicky and scattered piece.

Stross is cool, if a bit breathless.
T

I think I was fortunate to read some of Doctorow's stuff before I got to Stross; I do still have a fond soft spot for Eastern Standard Tribes but as far as sci-fi exploring how the near future might evolve, Doctorow's best effort is Makers and good as it is, it's not as good as either Accelerando or Halting State/Rule 34.

Now that I've read the book I can give a review. Pirate Cinema is an okay read, nothing spectacular. The first half is a cozy fantasy about a teenage nerd runaway who flees to the big city and finds food, shelter, friends, a lover, techie toys and creative honors in quick succession. The worst thing that happens to him is his laptop is stolen while he's napping in the park, which is why I call it a fantasy. That's the first half of the book and the part I enjoyed the most.

The second half rolls out the good ol' Doctorow agitprop where characters deliver entire speeches uncut. At times you could be reading editorials from the Electronic Frontier Foundation. Doctorow obviously wants his YA audience to get excited about political activism and get involved for themselves. Even though I agree with the ideas it's not the most entertaining reading experience.

Then there's the editing. The hero and his pals make what I'd call mashups. They're not trying to make better versions of existing movies like fan fixes do. They're ripping and remixing many sources to make new movies with new plots. Doctorow mainly gets into the details of this at the start and ending of the book.

Doctorow does a good job of describing the compulsion to remix and even the reasons why someone does it. On the other hand I think Doctorow has only a passing familiarity with cutting films himself. The edits in his book fall together like Tetris blocks, yes they are a puzzle to assemble, but still they always come together to make polished original movies. Anything is possible with enough rotoscoping, there's never any fatal errors with continuity, pretty much whatever you can imagine can be assembled. Real fanediting doesn't work that way, though I wish it did!
You must log in or register to reply here.
Share:
Facebook Twitter Reddit Pinterest Tumblr WhatsApp Email Share Link
Top Bottom